The Ice that Warmed my Heart 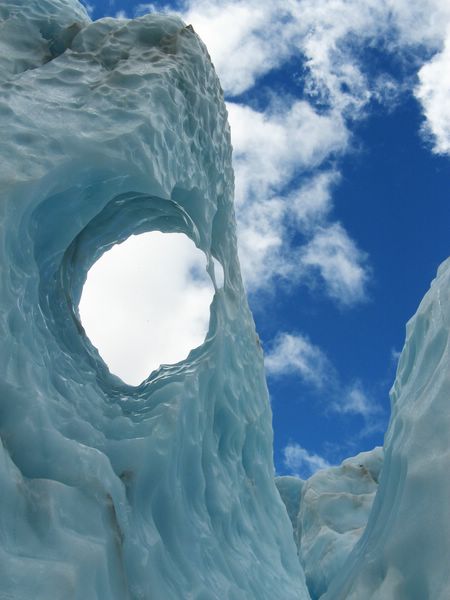 A glacier is the remaining winter snow that the summer melt has been unable to remove from the cooler heights. Each year another layer of surplus snow is added to the glacier. Time and it’s own weight soon transforms this residual snow into glacial ice, which then oozes its way down valley to melt away in the warmer temps of lower altitudes. The glacier finally terminates where the rate of melt equals the rate of flow. Basically – the other way to think of it is – it’s a HUGE chunk of ice that creates a kick ass playground for a few hours to walk around on!

I went to the playground today…I did the full day guided Glacier Hike in Franz Josef. This is one of the very few glaciers that exist in a warm/tropical climate. So it’s pretty unique – I believe the other 2 are in New Zealand and in Argentina…but you’ll have to Google that yourself. This Glacier is alive…it actually moves every week due to the massive snow falls at the head of Franz Josef and the rate of ice turnover is among the highest in the world, upwards of 2.5 meters per day..therefore the guided hike did include the ‘danger factor’ that I seem to love. Plus – it provided me some much needed exercise and a break from the bus, the hostel, and my sour mood!

I checked in at the guide center and ran into one of my fellow Magic Bus backpackers – Jordy. We hung together and went through the very impressive and efficient process of getting our boots, ice talons, socks (yes – I had to wear rented socks…eewwww), rain pants, rain jacket, mittens and hat – it was like an assembly line. A quick trip to the restroom and I was set! As a side note – I think this past week I’ve officially gotten over my germophobia that I was holding onto for a while. Rented hat, socks and mittens…no problem…as long as I was going to stay warm – I didn’t really care. I’m a step closer to being a ‘real’ backpacker!

We were introduced to our guide – Cliff who looked like a very fun-loving Kiwi – and cute too! He carried his big ice pick and led us to the glacier head where we saw the terminal cave – where the wet slurry of gravel and ice melt are flowing out of the glacier at a tremendous rate and form the glacial lakes around the region. First off – the glacier is HUGE – but since it’s surrounded by large mountains – you really don’t have any perspective to judge it by (kind of like looking at the hotels on the Las Vegas Strip). Finally – I could make out a few little dots on the ice…people…then you got a feel for the enormity of it! Each day there are about 20 guides on the glacier maintaining the original trails and steps and cutting new steps. Since the glacier moves so much – they have to constantly go on it and check the safety of it and create new trails as old one may have split in half and been replaced with a large crevasse.

Cliff showed us how to put on our ice talons, told us to hang on to the ropes when they existed – and off we went! It really wasn’t that cold when you were moving – and the day was sunny – so it was a perfect temperature to be climbing. The first part of the glacier had a trail of steps cut out as many people go up on half day hikes. However we were doing a full day hike which meant that we would go beyond the pre-cut stairs and get onto the real playground of ice – Cliff would cut the trail/steps as we proceeded up! Also – at the lower elevations – the ice was a bit dirtier – whereas the higher ice had this beautiful soft baby blue color to it…the only word I could think of when I saw this blue ice was ‘pure’.

We got up the heavily traveled steps and decided to break for lunch. We sat on the ice and I ate my PB&J (for the 4th day in a row now) and took in the view around me. I was overtaken with the amazing beauty surrounding me. I looked left and there was a large valley of blue ice with a green, lush mountain. In front of me was Cliff (which was a nice view) and the vast plane of gray slurry rivers flowing out into the green valley. On my right was a waterfall on the green mountain side. I was warm with joy inside – as I thought about all of my past lunches at my desk eating crap and working on email or eating at a meeting. I was sitting on a glacier, surrounded by beauty and the sounds of flowing water so far away from corporate life that it was mind boggling.

After eating lunch Cliff took us to a box of ice picks/axes for each of us and we followed him around as he created his own ice playground for us. He was like a little kid in a candy store – you could tell that he loved to be on this big block of ice more than anything. The stairs he cut were not like normal stairs…they were more like footholds in the steep places. He showed us how to walk up and down them sideways and balance with our ice pick…he called it the Franz Josef shuffle. I called it scarey.

He took us to an area with a large hole. He told me to put down my backpack and follow him – being a good follower – I did what he said. He took me in this hole/cave a bit larger than a man hole.

He told me to get in, grab the rope that was there and lower myself down the hole. I looked at him and said ‘no way’. I honestly thought he was kidding. I looked at this hole that went straight down and I couldn’t see the bottom. I pulled the rope in hopes that the end would pull up quickly – but I could see no end. I really thought he was joking with me – but he wasn’t. I argued with him for about 5 minutes trying to figure out if he was serious and just decided to go for it. These are the times when you figure out if you are claustrophobic…I was hoping I wasn’t. It was really wet as the ice was melting and I didn’t have my rain pants on – so needless to say I was sitting in a pool of icy, cold water and started to lower myself over the edge into this hole which was now a bit narrower than a man hole (I guess that’s why he told me to leave my pack behind). I was still thinking that by starting to go down the hole that I was going to call his bluff and he would tell me to stop – but that word was never uttered. Instead – I lowered myself down the hole wondering what in the hell I was doing this for. It was about a 15ft. drop and then I hit a bottom – sort of. There was another hole/cave that I went through (I just followed blindly as I couldn’t hear or see Cliff anymore) and it was downward sloping – so I sat on my bum and slid down it. I wondered for a second if I was going to slide all of the way down the glacier and get deposited out of the terminal cave – but soon I saw light – and I ended up safely outside again! Cliff was there to greet me with a big smile on his face – I was laughing hysterically at the fun of it all – and the fact that I was drenched in freezing cold water also was a bit humorous! He immediately wanted to know how I liked it…I loved it! We went walking back to the rest of the group to show them that I was still alive so that the rest of them could now experience this cave labyrinth. There’s nothing like the thrill of going first!

Cliff continued to test our claustrophobia and cut narrow little openings that we had to try to slide through.
At one point I really thought I was stuck…the crevasse was only about a foot wide (you went through sideways) – therefore you had to kind of treat it like a balance beam and literally put one foot in front of the other. However – I couldn’t move my feet and the slushy ice under my feet didn’t allow me to get any grip. Jory saw me struggling like a fly trapped in a spider web and reached out his ax handle to me so that I could use it to try to pull me out. That worked…I was free – I came popping out to the other side with a view of beautiful, blue, tall ice walls!

Soon the recess bell rang and we had to come back down from the ice playground. We had a long walk down and Cliff kept on telling us how when we go down we get lazy and that one slip and we would surly die. These types of ‘pep talks’ from Cliff really didn’t do much for me – instead they kind of freaked me out! It was really easy to get a spike from your ice talons caught in your shoelace and then you would tumble down to your imminent death. Cliff said that if you did fall in a crevasse – they weren’t in any hurry to get you out as you would most likely be dead…what a downer. All the way down the glacier I walked as if I had just gotten off of a horse ensuring that I wouldn’t get a talon caught in a lace! Sure – I looked goofy – but I was alive at the bottom.

By the time we got back down to solid ground the fog had rolled into the rain forest and our beautiful blue skies were blanketed in gray again. But this frozen adventure today thawed me from my sour mood from the last few days. Maybe it was a combination of the sun, the adventure, the adrenaline of exercise, the amazing setting, or simply that I was freakin’ climbing on a glacier…but whatever it was – it did the trick – my gray attitude had been lifted. I went back to the hostel, took a HOT shower, hung out with my new friends and ate another PB&J sandwich – and my ‘world’ was good again. Queenstown…here I come!

8 Responses to "The Ice that Warmed my Heart"