The Great Wall â The Great Destroyer of Knees

The Great Wall â The Great Destroyer of Knees

One of the main reasons I went to China was to do Great Wall hiking through one of the most breathtaking sections of Jinshaling and Simatai. Closed for a period for a bit of restoration and other issues, today, it is again open for visitors. Undulating through the steep mountaintops â my knees wouldnât like me for days after this hike!

Although only approximately 8 miles from Jinshaling to Simatai via the Great Wall â it takes anywhere from 4 to 7 hours to complete it depending on your fitness, and of course, your knees! Much of these sections are still in their original state – take care when stepping foot on each ancient space that has been stepped on countless times before you.

Where the two sections of the wall connect, there is a woman taking tickets to move on to the next section â if you donât have a ticket, then you can’t pass through to Simatai. Dad and I had signed up for trekking Jinshanling the first day which included walking to the beginning of the Simatai section and then turning around and coming back. Day two we would drive over to the Simatai section and hike to the steepest section of the wall. In hindsight â I would recommend to simply pack a lunch and do the trek from Jinshanling all the way to the end of Simatai â it would be much more satisfying since you go from point A to point B. Regardless, we still had a great time focusing on one section at a time.

Jinshaling Section And Our Stalkers

We started out taking the cable car up to the wall. The cable car was rather old, and we were the only ones on the long 18 minute ride that morning. It was a good signâ¦.not many tourists. This was a famous section of the wall and a popular hike for trekking enthusiasts. However â since most drive out from Beijing in the morning, we beat the trekking crowd by staying in our bug infested hotel in Jinshalingâ¦I knew the suffering would be worth it! 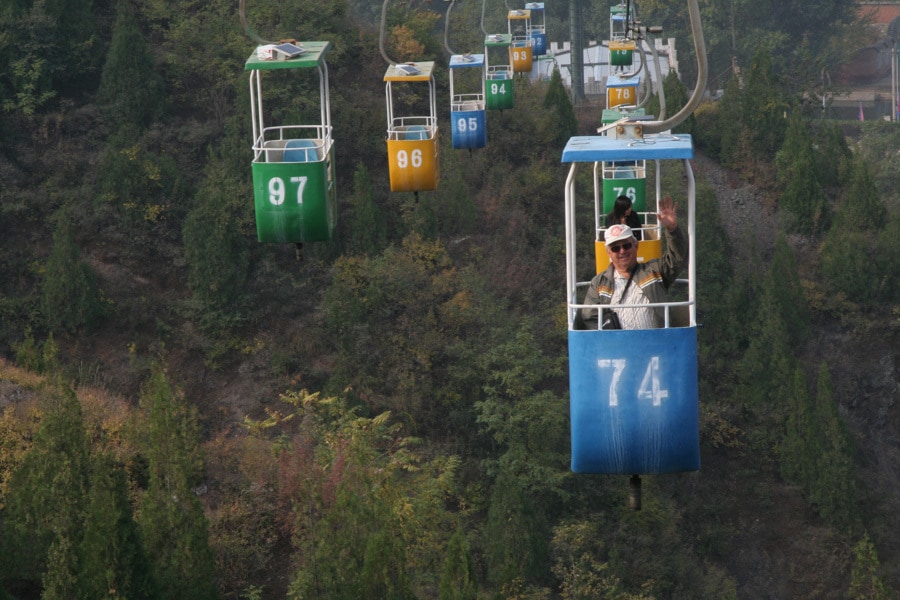 Once again we were blessed with a picture perfect fall day. The leaves were changing providing a colorful palette of backdrop for photos. There were a few photographers at the wall when we got off the cable car taking sunrise shots with large lenses that made me enviousâ¦yes â I had bad case of camera envy!

The only other people at the wall at this time in the morning were the hawkers. Hawkers are the local villagers and farmers that climb up to the Wall and attempt to sell their tourist goods. This can range from books, to cold water to beer and postcards. I must admit, the views were amazing, but having hawkers glued to you was about enough to give you trekking rage! They pretty much forced themselves upon you whether you wanted them there or not. I think their sales strategy was that you would pay them to leave you alone…which I suppose was rather effective! They followed youâ¦just a few steps behind â nimbly jumping down steps and running circles around you reminding you to âbe carefulâ with every step. Their English consisted of âPlease buy from meâ and âbe carefulâ. Iâve been traveling long enough to know that this is just how things work in the world of tourism â people try to sell you things any way they can. So, when we had two hawkers attach themselves to us I was prepared to deal with it. We were like big dollar signs to them â plus, since my dad was older they wrongly assumed that he would need assistance up and down the steep inclines and crumbling stairs. After a while though, I did try my best to communicate that we wanted to walk alone and eventually they stayed about 100 ft. away from us and allowed us to walk in solitude. It was like having a restraining order on a stalker! 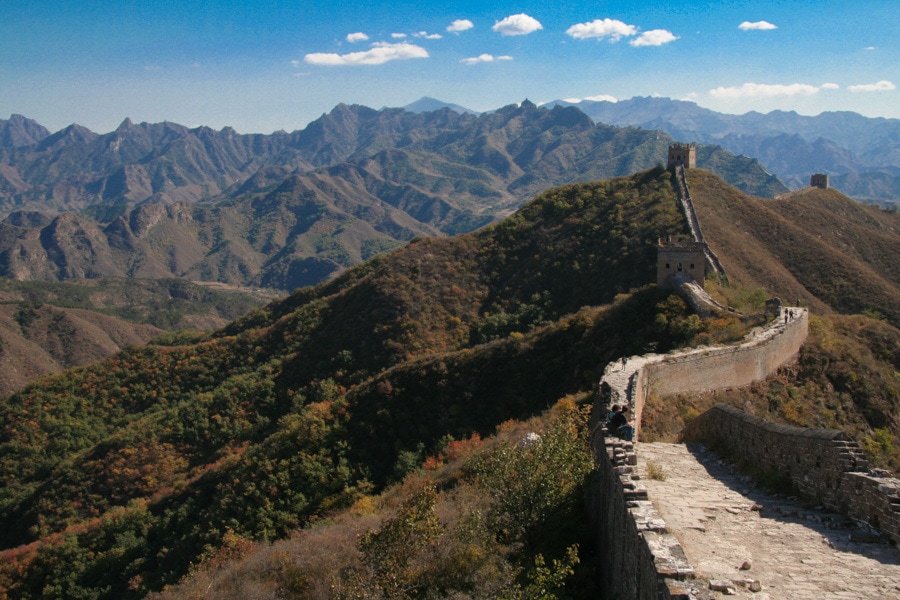 The hike was very different from the previous day. It was definitely more of a trek than a walk. The wall was crumbling and every step had to be planned out. The towers on the wall originally existed for a way to send smoke signals of an impending Mongol attack as well as a place to store weapons; however now they were crumbling down. The modern day uses for the towers seemed to be for hawkers to sell their goods (there was even a guy selling opium there!), and they were a perfect place to stop and rest before moving on to the next steep climb! We decided to pass on the Opium, even though it might have made my knees feel better.

The wall was much steeper than the previous day because in many spots you were forced to use your hands as if you were climbing a ladder and you were forced to descend on your butt! My dad plodded along impressing everyone (fellow trekkers and hawkers) along the way. The most common questions besides âWhere are you from?â, was âDo you mind if I ask how old you are?â. He made all kinds of friends along the route. He was the ambassador and my role was the pack muleâ¦I carried everything â which was a fitting role for as daughter to play I suppose. The pack provided another level of difficulty to the trek as you were constantly trying to figure out your balance as you descended, ensuring the weight of the backpack didnât take you too far in one directionâ¦namely tumbling down! 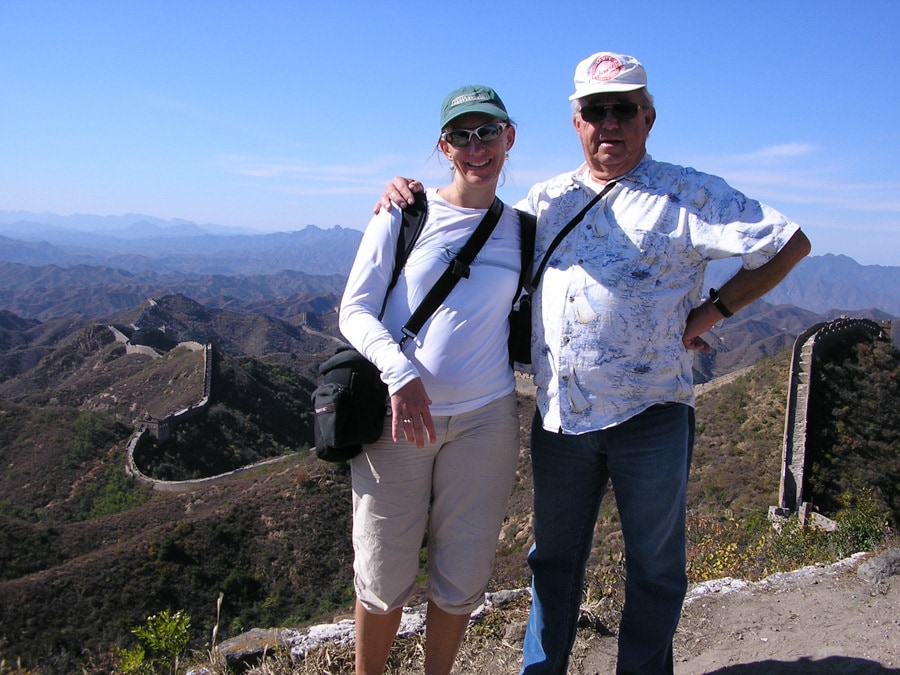 After 2 hours of hiking, we arrived at the Simatai âticket boothâ (basically a lady standing in the doorway asking for a ticket or money). We congratulated ourselves for making it and then we had to turn around and face the same route back. This was a daunting task as most of the route there was uphill, which was challenging â but thatâs ok because I am a climber. I love to climbâ¦I hate to descend. The thought of descending down that steep, crumbling route was rather terrifying to me. I did fleetingly consider how much I would have to pay a hawker to transport me back! Instead we sat in the shade of a tower and had a snack and some Gatorade looking back over the stunning view of what we had climbed. 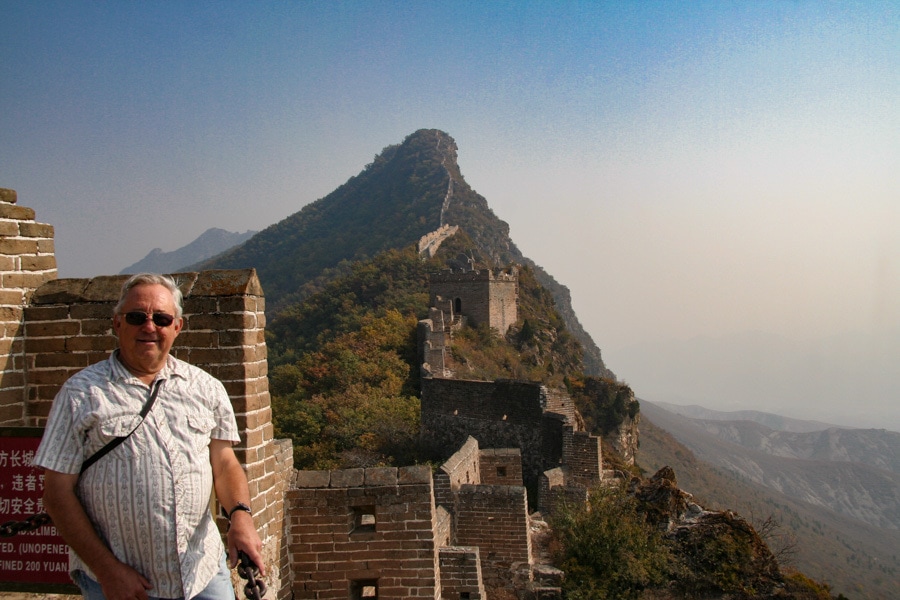 For all of you out there that complain that I donât put photos of myself on the site â well â hereâs your chance see many photos of me thanks to my dad. I swear he thought he was Ansel Adams. I hadnât been photographed this much in my travels to dateâ¦I tried to suck in my stomach and ensure that I didnât have sweaty pitsâ¦but after a while I stopped caring! So â check out the photos â not only will you see spectacular photos of the wall in its fall splendor â you will see me â in my sweaty splendor!

We took our time descending back to the cable car â with our stalkersâ¦I mean hawkers still dutifully following us 100 ft. away. Finally, at the end I sat down with them and bought a book from them â it was cheap and they actually did leave us alone most of the time as I had requested; I suppose everyone got what they wanted. Itâs weird to pay people though for staying away from you, but thatâs tourism sometimes. Their stamina in following you is as infuriating as it is impressive. 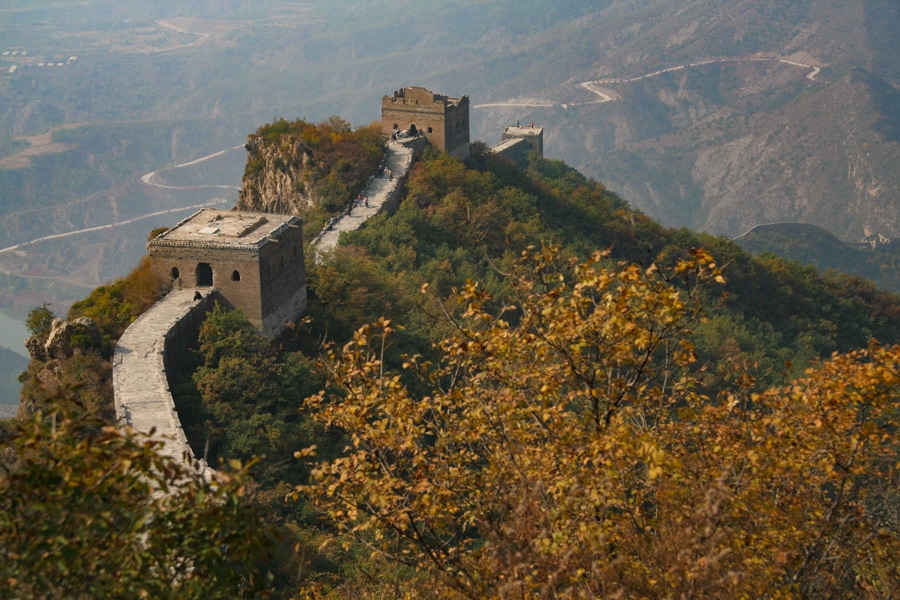 The next day we woke early and drove to the Simatai section of the Great Wall. This is where our weather luck ran out â the smog had started to settle in. As we rode the cable car up to the Simatai section, the mountain was enveloped in a yellowish haze. Roseanne, our guide, decided to accompany us on this section.

Unlike the other sections we had trekked, the cable car did not actually take you all the way to the wall. It took you near the wall, but it was still a good 30 minute trek straight uphill to get to the tower and onto the wall. It was quite a wake-up call to my sore body and my aching knees! This section was fairly well preserved, but once again it was quite steep. We climbed it upwards until we could go no further. The section called the âHeavenly Ladderâ was in front of us, but off limits hikers. This section of the wall was treacherous and very narrow. In fact â it was just a wall with really no where to walk â hence they called it the ladder. 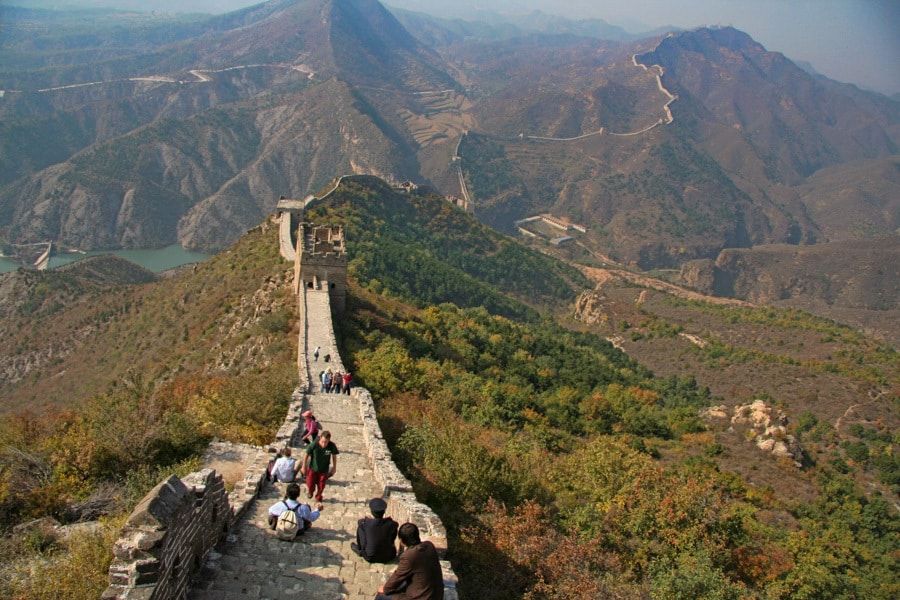 We found a great little place to sit on a rock and gaze out over what we had accomplished over the last 3 days. Great Wall hiking was impressive, but even more impressive was my dad. He did a great job of climbing and was inspirational to those around him â the locals and the tourists, as well as me. I always said that one of the reasons I took this around the world trip was because I didnât want to wait until I was 70 to do things like climb Kilimanjaro or the Great Wall as I would never be able to do it at that age. But he proved me wrong. So â maybe when Iâm 70 I will go back to Kilimanjaro and finally summit it!