Riding the Rail Pass in Europe 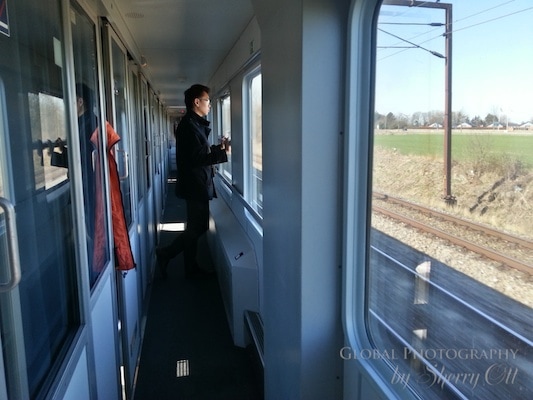 Watching Europe roll by with my Eurail Global Pass

The train gently rocked back and forth, I spread out in my first class seat, plugged in my electronics, and enjoyed the complementary coffee that the steward brought me. Now this is the way to travel in Europe. No busy airports, security, or check-in. I simply got on the 1st class train car, found a seat that wasnât already reserved and made myself comfortable. I looked out the window at the landscape and thought about how many people choose to see Europe at 30,000 feet quickly flying from country to country utilizing budget airlines and never really seeing life outside the big cities. I prefer to have my feet close to the ground when I really want to see an area, which is why I chose rail travel as my way to experience Europe this spring.

When I received the Global Rail Pass brochure in the mail I felt giddy with excitement. It was the same feeling I would get when I was a young kid and my mother would release me in the candy aisle at Ben Franklin after I received a good checkup from the Dentist. (yes â I know itâs a twisted reward for no cavities â but it was our tradition). I unfolded the big Eurail map on the table and started to dream of all of the places I could go – I had all of Europe to choose from!

How the Global Rail Pass Works

â¢ The pass is good for two months starting on your first day of travel. You have to activate the pass in person at the train station.
â¢ You can ride the train on 15 days during that 2 months. Overnight trains donât count as 2 days â they only count as one â but you need to read the fine print on how to record them on your pass else (like me), youâll easily screw up and lose a day.
â¢ No ticket is required. You simply fill in the date of travel on your pass, and get on the train and hand it to the conductor. A warning â if you forgot to write in the date â the conductors have no mercy – you will pay a fine. You will need to do a little research online or at the train station before hand though as some of the nicer/faster trains require a seat reservation even with the Global Pass. Seat reservations are normally only about 3 to 10 Euro with the Global Pass. However if no reservation is required for that train â then you can get on and sit anywhere in First Class. One exception to the no ticket rule â all overnight trains require reservations/tickets â but the prices are greatly reduced for Global Pass holders.

I called upon the help of my friend Ron â my âgo-toâ planner – and asked him to plan a route for me that would include some of the more beautiful train routes in Scandinavia with stops in the big cities. He researched various routes on the DB Bahn Site and came back with a plan for me that included ferries, tunnels, Denmark and Sweden! I then used the site to normally quickly research whether a seat reservation was necessary. Or one can also easily go to the international ticket desk at any train station and check if reservations are required and purchase them if necessary. 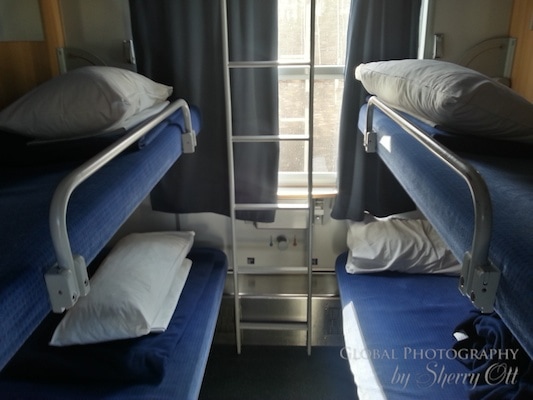 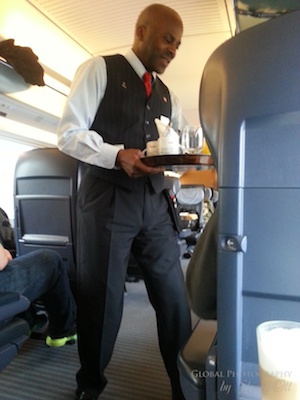 Being able to sit in First Class is one of my favorite things about the Eurail pass. Each experience is a little different â some included a snack and drink, some just included a drink. Some of the first class cars were amazing and spacious and some were just average. I found that in Sweden, the reservation fee for the trains I wanted to take were quite expensive for first class so I opted for 2nd class which was also spacious and comfortable. Itâs also worth checking the prices closely for the overnight trains. I took an overnight sleeper train from Amsterdam to Copenhagen and the price I was quoted for a first class sleeper car was over 100 Euro, however the 2nd class reservation was only 27 Euro â I opted for the cheaper bed that night.

Over the course of 2 months I ended up making stops in Brussels, Frankfurt, Berlin, Beelitz (Germany), Copenhagen, Stockholm, Varberg (Sweden), Hamburg, and Amsterdam. Some of these were planned and some were last minute decisions â thatâs the beauty of the pass â itâs flexible since you donât need a ticket. I initially used the train pass to go from Brussels to Frankfurt to Berlin where I then stayed for a month to live la vida localÂ â the ultimate slow travel. After Berlin I had 2 Â½ weeks left on my Global Pass so I thought that I better make the most of it and speed things up a bit. I wanted to stay north and see some countries that I had never set foot in before â so my plan was to head to Scandinavia. Iâll be writing about Copenhagen and Stockholm in future posts as I stayed 3 days there each so that I could get a feel for the cities.

I also had a few surprises on the train â one of the biggest ones was when the train passed from Denmark to Germany over the Baltic Sea. I expected that there would be a bridge or tunnel similar to how we passed over the Great Belt Bridge and Tunnel connecting the Danish islands of Zealand and Funen to finally pull into Copenhagen. However, I was stunned when the whole train rolled onto a ferry and turned into a boat! The ferry ride was 45 minutes with spectacular views and a nice dose of fresh air on a long train ride from Sweden to Germany. 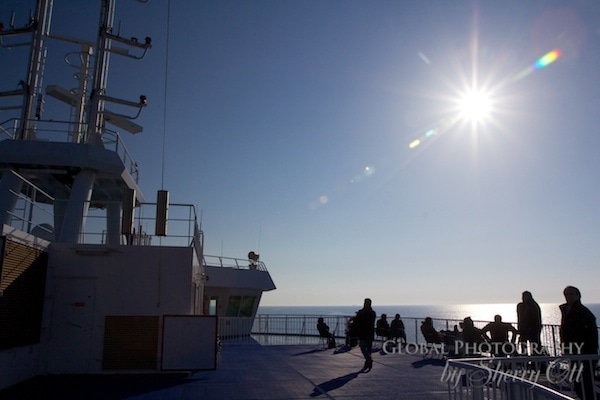 Baltic Sea Ferry – with the train ‘parked’ underneath!

I am a self-confessed train nut (yes â I have a surprising history with trains) â and I love every aspect of the train experience from the views to the stations, to the conductors, to the passengers. By far the most frequent thing I saw outside of my window was windmills â the new white, sleek wind turbines . They were in fields, seas, near bridges, and highways. Europe has definitely embraced wind power â something that youâd never notice from a plane. However as far as views outside my window go, the waterways around Denmark and Sweden were by far my favorite sights. 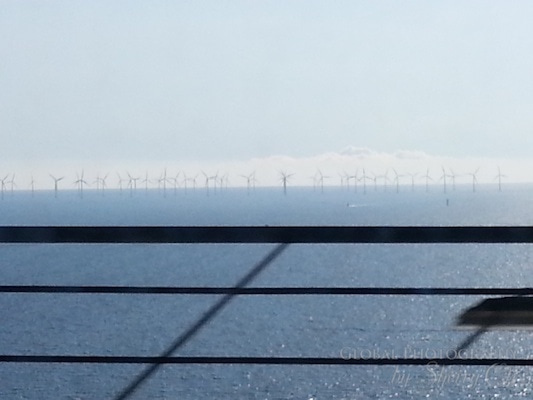 Wind Turbines – the most common thing I saw out the window.

Strangely I try not to talk to people on planes, however on the train I seemed to meet all sorts of people. My sleeping car mates, two young girls from Canada, were lovely and we were all equally surprised when the police came through the train at 5AM asking for passports and then took one of the people from our sleeping chamber away never to be seen again. It felt a little like a mystery on the Orient Express â but it was just Germany. I also met a man who sells concrete speakers â yes concrete. And I thought my luggage was heavy!

Interested in taking your own train adventure around Europe? Then check outÂ ACP Rail WebsiteÂ to see all of the options and benefits.
Cost of the pass I used: Â $1171

Thanks to Telecom Square for keeping me connected while on the train! Â Secure & Convenient Mobile Internet. Use your i-phone, smartphone and tablet overseas with no roaming charges.

Disclosure: ACPRail provided me my Eurail pass for this trip. However all of the opinions expressed here are my own.

12 Responses to "Riding the Rail Pass in Europe"