âThe building is designed to strike fear into your heart by giving you a completely solitary, isolated experience,â Steve Buscemi whispered in my ear. Then I heard a creaky, heavy, cell door being pulled shut with a metal on metal bang that made me jump. I had just entered solitary confinement in prison.

I was listening to the audio tour of Eastern State Penitentiary narrated by actor Steve Buscemi. Steve freaked me out in the movies Reservoir Dogs and Fargo, so he was the perfect voice to be echoing through my head as I walked through the crumbling cell-blocks. Yes, Philadelphia is the home of some of the most famous pieces of Colonial History, but the Liberty Bell isn’t the only historic iron in town. Eastern State Penitentiary is an abandoned prison in the middle of Philadelphia that you canât overlook. Itâs full of historical significance and full of great images ready to be taken; which of course was the reason I was there armed with my camera while listening to Steve.

Imagine being the architect who gets to design a building to intimidate and isolate you. Thatâs what architect John Havilandâs claim to fame was â an architect of solitary fear. A prison is one of the only buildings that you create, and hope that people never come in it. John Haviland had a big challenge ahead of him and looked to God to help out. Luckily, God was a good guide in this case and the prison interior was designed with high vaulted ceilings to give it the feeling of a church and repentance when you entered. However the building had an identity crisis, it was somewhat church-like on the inside, yet Gothic and cold on the outside with high medieval looking walls and towers.

The walls from the inside

The entrance to the prison

The center tower looking out over he grounds

This was a revolutionary idea in 1829; building a prison where each prisoner would be completely solo and alone. Haviland designed the prison in an asterisk formation; 7 cell-blocks radiating from a central rotunda. Each prisoner had his or her own private cell, centrally heated, with running water, a flush toilet, and a skylight (the only light). Adjacent to the cell was a private outdoor exercise yard contained by a ten-foot wall and just used by that single prisoner. In essence the prisoner had everything they needed to survive in their cell and never EVER had to come out of it, or see another person.

You might think this was cruel, however, this new form of prison actually was allowing better treatment than what prisoners of that day were used to.

âEastern State Penitentiary broke sharply with the prisons of its day, abandoning corporal punishment and ill treatment. This massive new structure, opened in 1829, became the most expensive American building of its day and soon the most famous prison in the world. The Penitentiary would not simply punish, but move the criminal toward spiritual reflection and change. The method was a Quaker-inspired system of isolation from other prisoners, with labor.” –from the historical documents of ESP

Isolation and the Solo Traveler

Iâve been a solo traveler and living a solo life for a very long time; I love my time alone. I think being alone for a time is necessary for everyone â itâs empowering. However being solo and being isolated are two different things. Isolation does not bring empowerment, it brings depression; and in Eastern Stateâs case, they hoped it brought reform. Over the years of traveling solo, Iâve had my moments of feeling isolated, cut off from the rest of the world, lost and no one who understands my life. In fact, itâs probably one of the hardest things about being a solo nomadic traveler for a decade â the isolation.

This Eastern State Penitentiary version of isolation sounded pretty horrible; and it looked horrible too â which is why I was there. I love to photograph abandoned, run down places, and thatâs exactly why I came to Eastern State â photography. However what I didnât anticipate was the story and history behind it being so interesting and so applicable to my own solo life in a way.

Evolution of Isolation and Abandonment

This idea of solitary prison that evoked penitence through complete isolation eventually died out and the Pennsylvania System was abandoned in 1913. The system was abandoned, but the prison was not. They added on levels, more cell blocks, mirrors, a dining room, exercise yard, and even a synagogue. Eastern State evolved with the times and was used as a prison until 1971 when it was permanently closed.

The back of a cell is missing and trees are starting to make their way inside.

Trees still grow inside in many places

Plants and foliage took over the prison when it was closed.

There it sat; eroding away, with no plan for the siteâs future. Sure â the city of Philadelphia talked about turning it into a park or mall, but eventually they settled on making it a historic landmark. However, they had a lot of restoration to do since the prison had sat ignored for nearly 13 years. They had to take it back from Mother Nature. It reopened in 1994 for tours where visitors wore hard hats. Theyâve continued to put a lot of work into the restoration and now itâs one of the biggest visitor attractions in Philadelphia.

For those who like destitute and abandoned places, bring a camera and spend the day photographing the halls (tripods require special access and a fee). I suggest taking a wide-angle lens to really get the maximum creepy effect down the long halls, but donât forget the details of crumbing paint and debris either. Itâs a great place to play with lines, and light and really dust off your photography and composition skills. 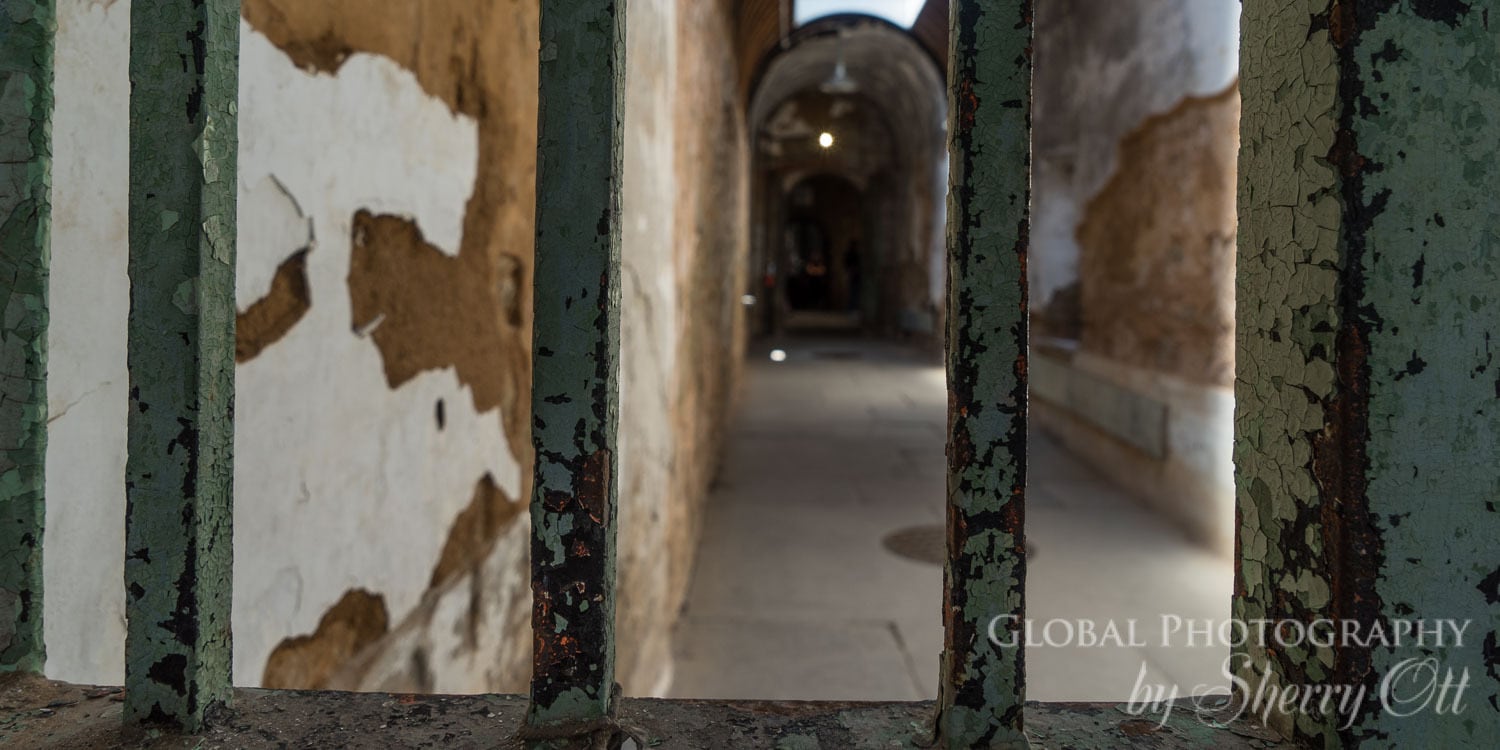 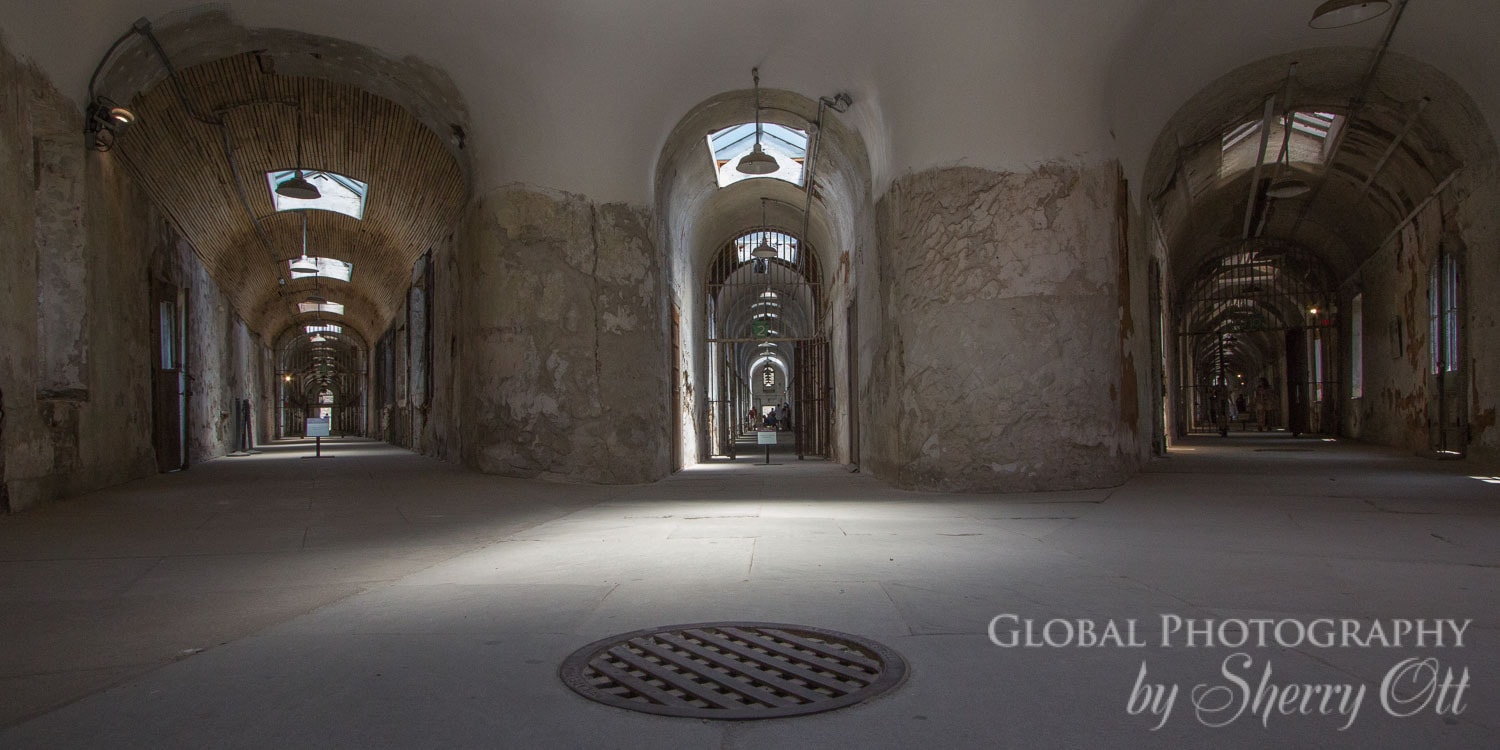 3 corridors of cell-blocks. Used for filming the movie 12 Monkeys 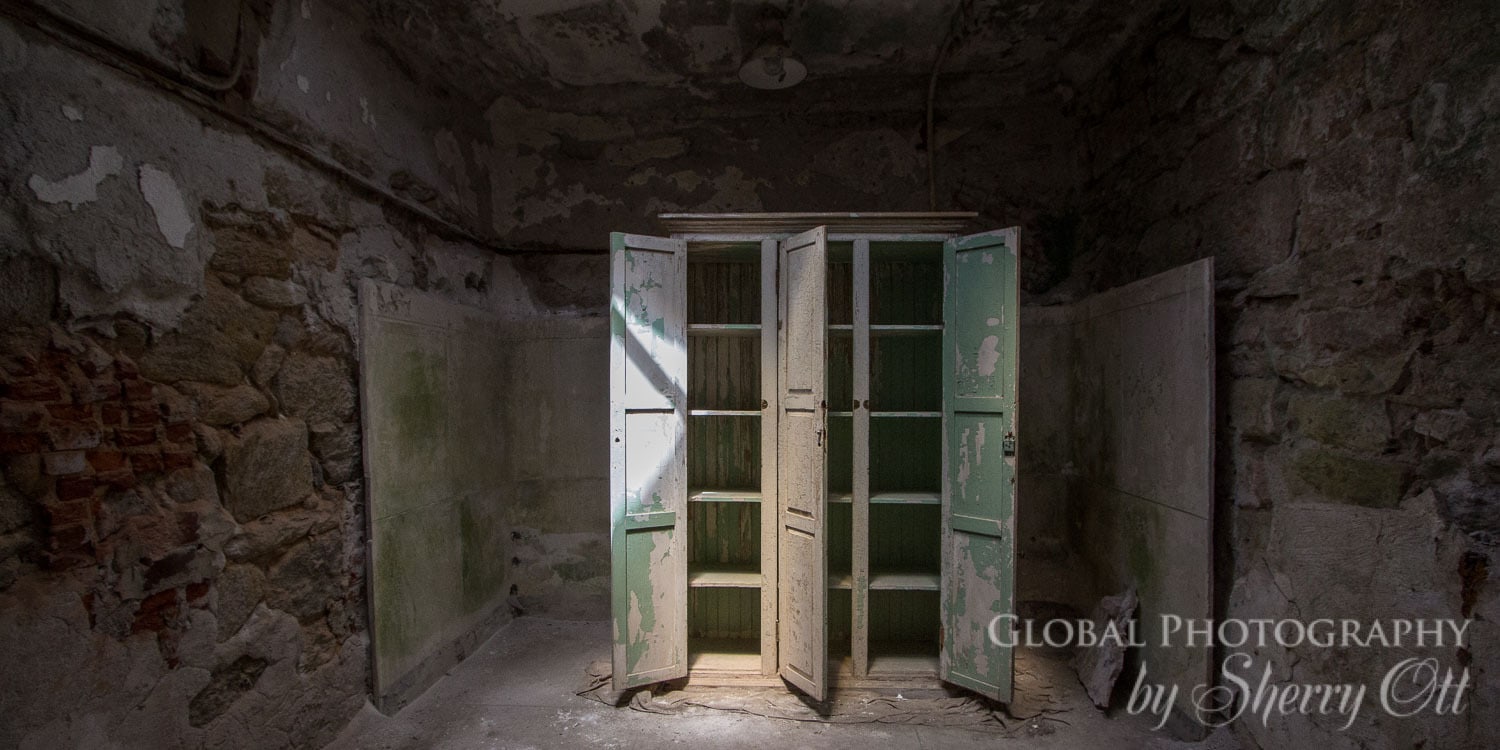 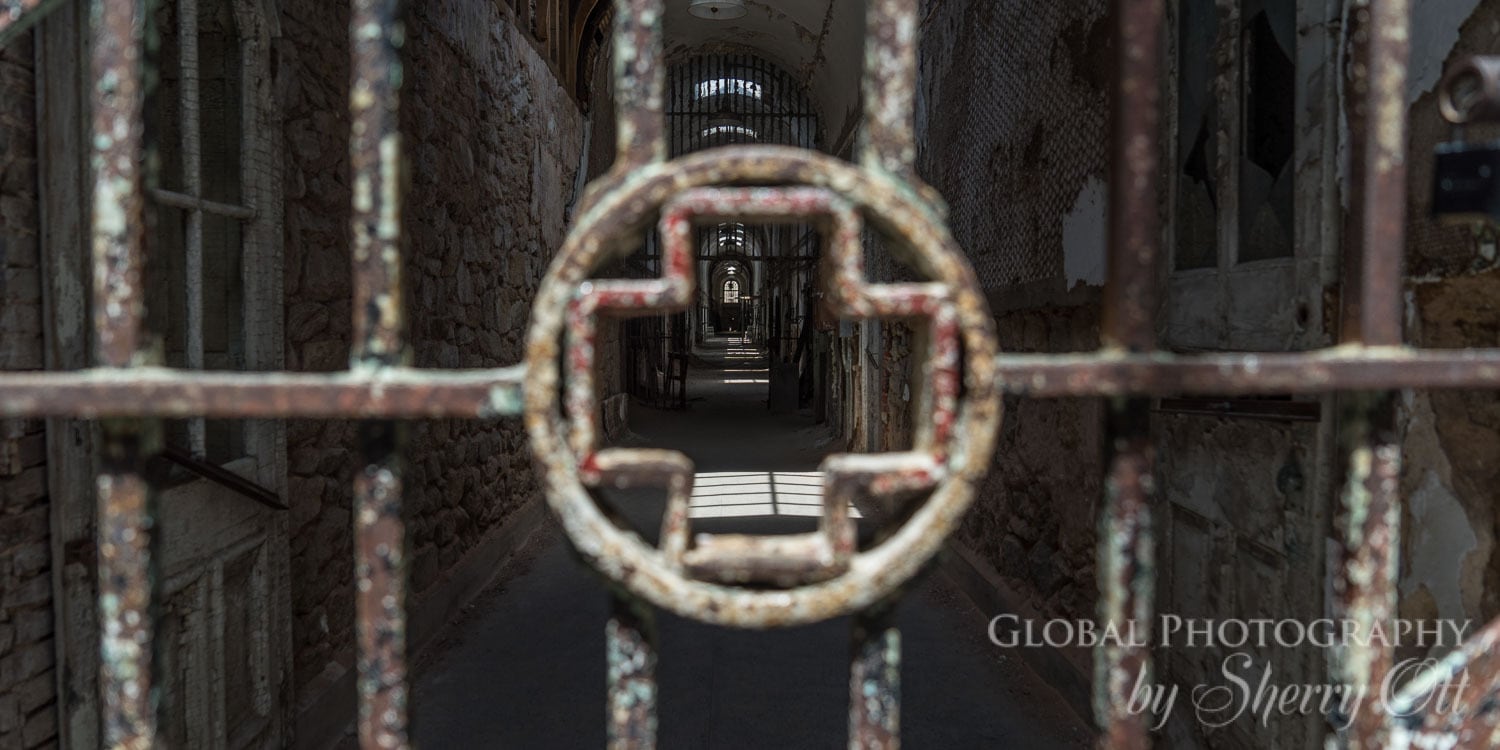 The gate leading to the prison hospital 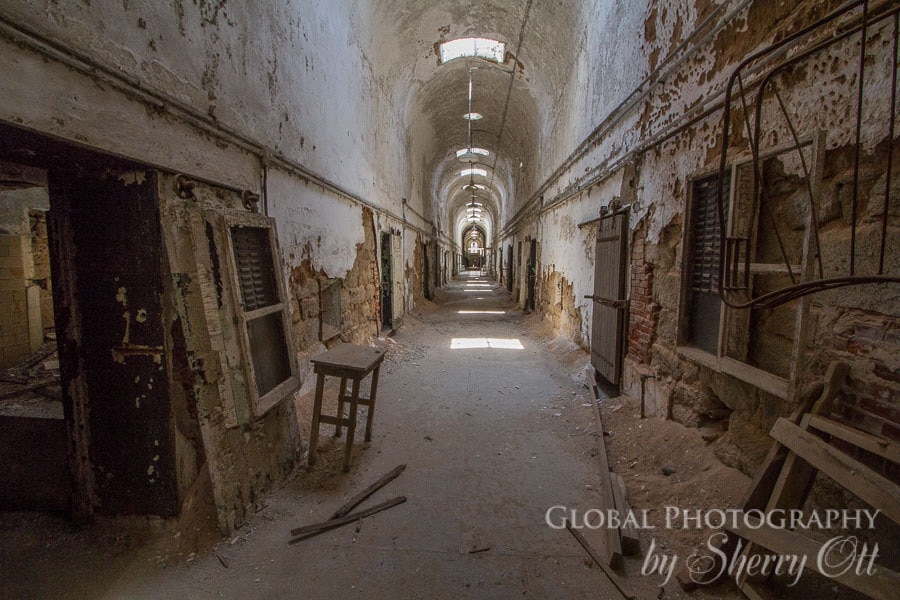 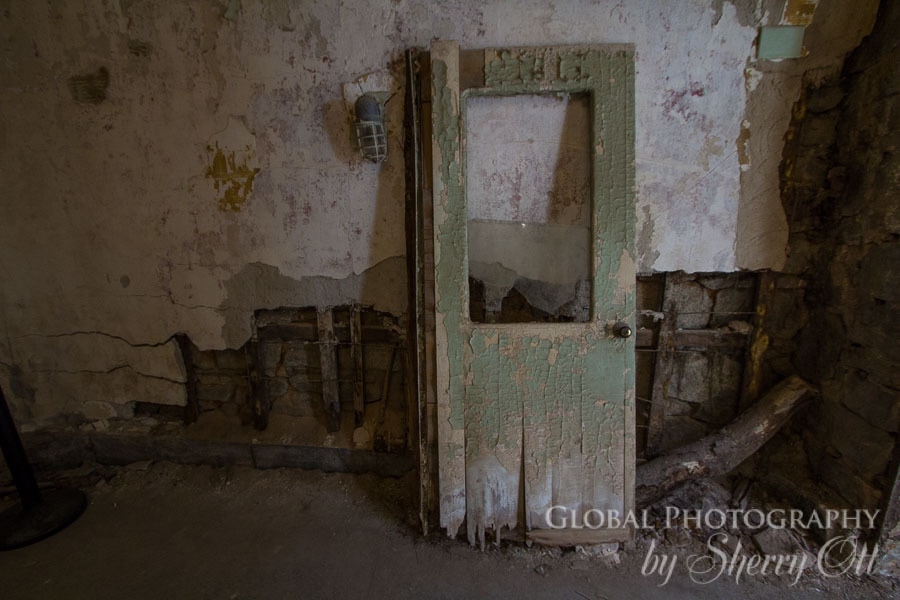 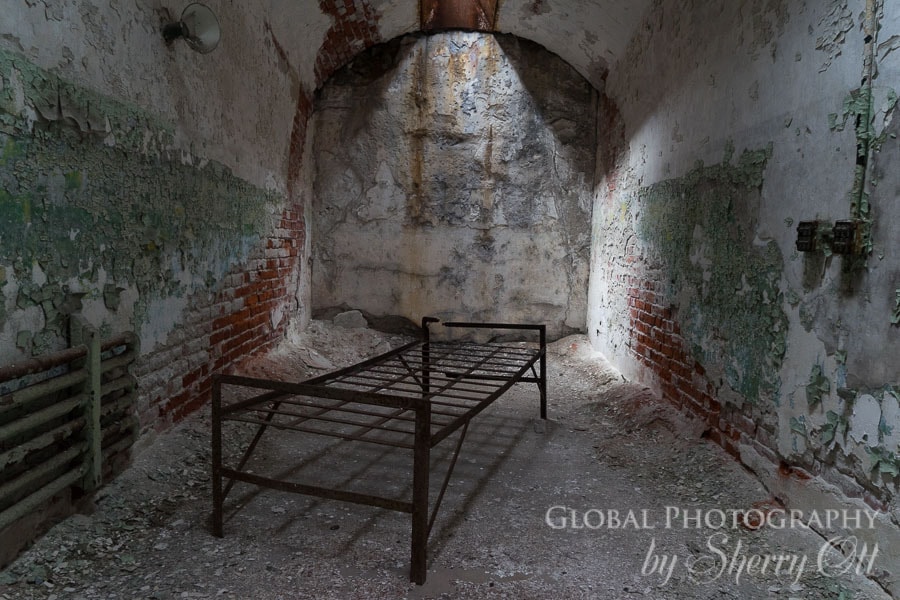 A cell designed for isolation 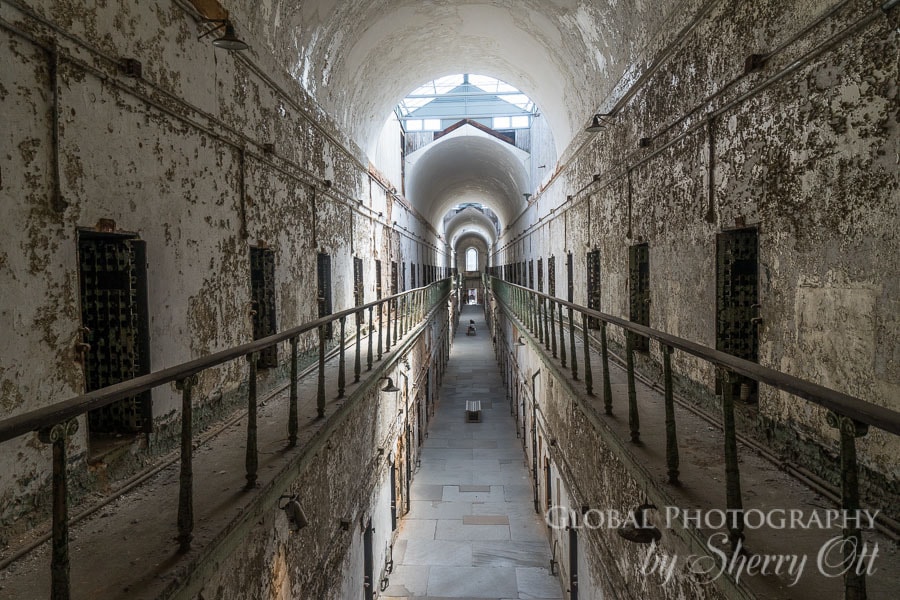 A 2 story corridor of cells 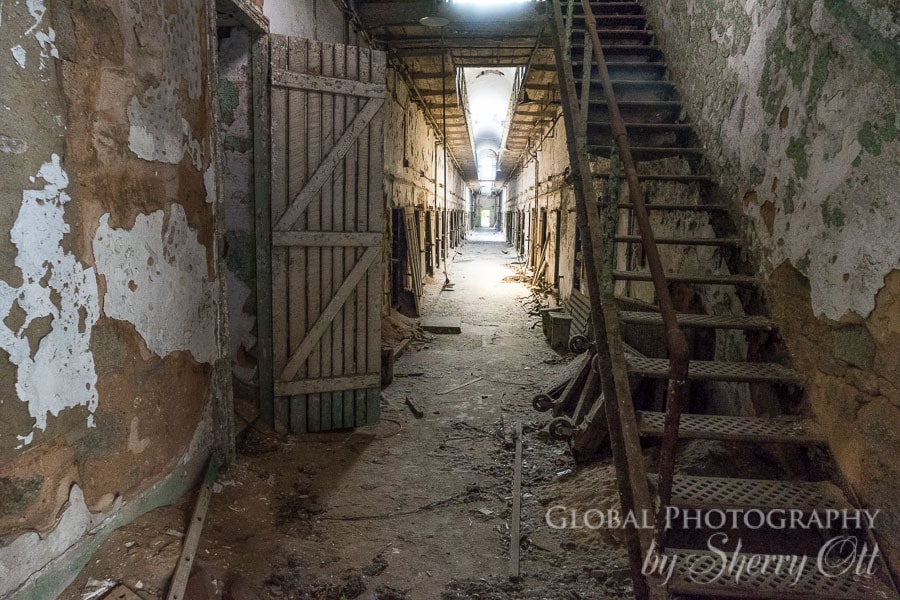 Mirror strategically placed so a guard in the middle could see down all corridors easily.

From the inside looking out

And donât be intimidated by traveling there alone, you wonât ever feel isolated in this popular Philladelphia historic attraction!

Plan Your Trip to Philadelphia

A room with a view

Stay at the Sonesta Philly where you will get more than a bed, youâll get an entire museum. The Sonesta is known as the ‘art hotel’ and showcases exhibitions in their lobby gallery that change every 6 months.Â  They also commissioned a mural for the outside of the building – so don’t forget to look up!

Unique Things to Do in Philadelphia: Context Travel Tours

In addition to Eastern State Penitentiary Tour, check out more freaky and creepy stuff at Context Travelâs History of Medicine in Philadelphia Tour. Context Tours have been a long time favorite of mine and Philadelphia is their home, so they offer a bunch of tours that you shouldnât miss!

Need More Ideas? Use Visit Phillyâs website to plan out things to do and check out the events.

Eating in Philadelphia:Â  Forget the top 10 lists and Michelin Guides, and get advice from a local.Â  I met food blogger Marilyn Johnson from PhillyGrub Blog while in Philly and I happilyÂ  took her advice for a number of places! My favorite – Cleavers for my cheesesteak â a close stop from my Sonesta Hotel â delicious!

Drinking in Philadelphia:Â  Stop at the secretive Franklin Mortgage & Investment Company. No, it’s not a bank, it’s a speakeasy near the Sonesta Hotel. Or if you want something more refined have a drink at the Sofitel Liberte Lounge where they have their own rooftop beehives raising honey for their fun cocktail menu!

See all of my Eastern State Penitentiary Photography

I was a guest of Visit Philly and Sonesta Hotel during my stay in Philadelphia for the Bloghouse workshop.Â  However, all opinions here are my own.