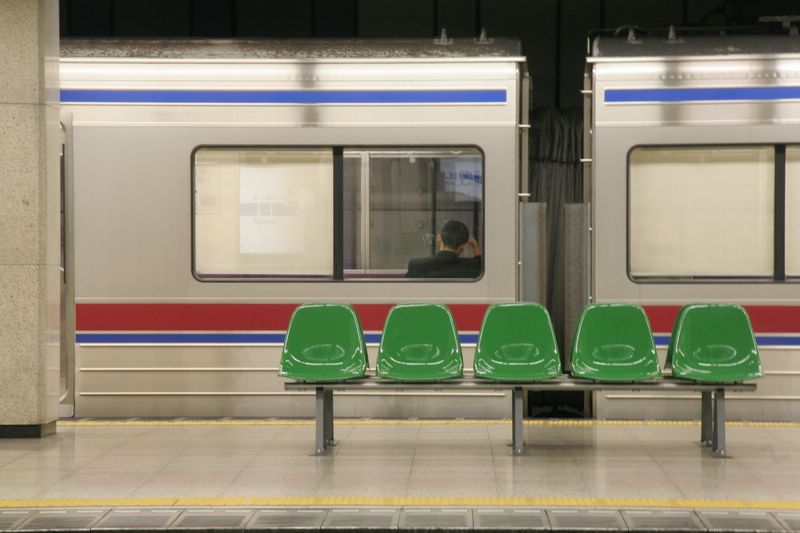 There are 32 million people living in Tokyo. 8 Million of them ride the subway every day. That turns into about 3,000 people on each train. No wonder why most of the time you feel like a sardine and it often takes a white gloved âsubway conductorâ to squeeze you into the car before the doors shut. Not only were they a great way to travel across the massive city at a reasonable price, but they provided quite a lot of entertainment for me as I kept my mind busy comparing and contrasting the Tokyo metro with other subways around the world.

The first thing that stood out to me was that Tokyo is a clean city, ultra clean. You could do the âwhite gloveâ test anywhere and it would pass, hell â you could even abide by a â15 secondâ rule if you dropped your food it was so clean â even in the subway. It was a far stretch from the New York subway that was my commuting vehicle for 3 Â½ years. Iâm not sure where they put all of the homeless people and the artistic entertainers in the Tokyoâ¦because they werenât in the subway. Iâm used to associating the subway with an underground dark, dank, dirty, rat infested hole. So when I came down the functioning escalator to the heated platform â I was shocked to find recycling bins, helpful live attendants, and speaker systems that didnât sound like the Peanutâs Gang teacher.

Riding the subway provided some of the best people watching around. I would sit and amuse myself watching all of the locals around me commuting, and construct conclusions about the people, the subway, and the culture. I concluded that 7 out of the 8 million commuters wore a shade of black, navy, or gray â leaving a bit of a gloomy glow. Photo: A busy station stop in Shinjuku – sea of people!

However â among that black you would often see a pink stuffed animal sticking out of someoneâs pocketâ¦a cell phone âcharmâ (I would call it a cell phone pet from my perspective). Sure â we have cell phone charms â but it was if someone took a stuffed teddy bear and hung it off their phone â the phone danglers were huge and multiple. I watched kids and adults, men and women, whip out their phones with their dangling stuffed animal at the end, not ever fully understanding the functionality of it. Lord knows that it was too big to fit in your pocket, but there was some draw to the dangling furballs. I guess the obvious one is that they wouldnât easily misplace or lose their phone!

Another thing that stood out were the stations guards/conductors. There were always multiple conductors at each station, dressed in crisp uniforms, carrying an amplified microphone, and always wearing white gloves. These white gloved men were the keepers of order on the subway â they ensured that people waited in organized queues, and that the maximum amount of people were squeezed into the car in order to efficiently keep the system running on time. By the way, the subways runs about 98% on time – a miracle considering the amount of people. I would just sit there and let trains pass just to watch them do their job â amazed at the orderliness moving masses of people.

Iâm not really sure what Tokyo locals do at night â but whatever they do â it must not include sleep. I say this because no matter what time of day, at least 50 % of the subway car was sleeping. Iâm not joking â I actually conducted little surveys when I would ride a car â counting the number or awake people to dosing people. I couldnât find any commonality among the data â young, old, blue collar, white collar, men, women â they were all sleeping. The strangest thing is that somehow, miraculously they would wake up in time for their stops. I started to wonder if their cell phones were somehow connected to the train schedule and would set off a little alarm at their stop and wake them up. It actually seemed like a feasible explanation after you see the amazing functionality that a Japanese cell phone holds!

The Tokyo subway system should be given the award for the most forward thinking subway Iâve ever ridden. They not only had recycle bins all over the stations protecting the environment, but they also had escalators and elevators at the stations making the whole system elderly friendly. Finally â they even had special âwomen onlyâ cars that they enforced during the rush hours. Considering you were shoved into the cars during the rush hours â a woman only car seemed liked a brilliant idea!

After stumbling through the first day of confusing signs, maps, and Japanese ticket machines â I came to love the subway. I realized that there was much more English than I originally thought, I learned how to understand our direction and what station stops were coming up next, and I even learned how to finally buy a transfer ticket at a ticket machine! That feeling of going from total confusion to understanding it is priceless. But most of all, I was able to see a slice of Japanese culture that you will never see from a taxi â the underbelly of Tokyo.

3 Responses to "Underbelly of Tokyo"