The Culture of War 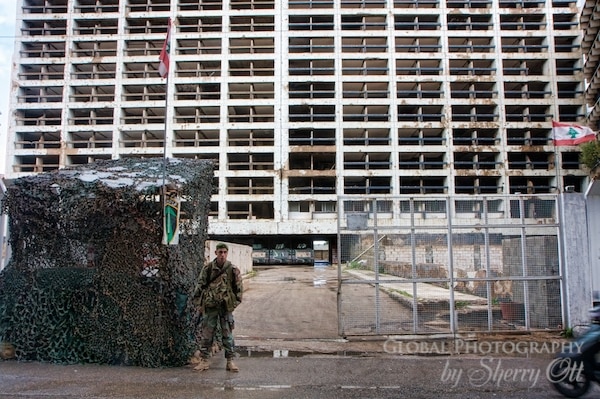 âThings may start shaking, so donât make any plans on February 14th. â said Walid. âShakingâ was Walidâs term for instability. He went on to explain the significance of February 14th to the Lebanese; this was the date that Prime Minister Rafic Hariri was assassinated in a violent explosion that rocked Beirut right back into instability. The assassination happened over 6 years ago in 2005, but there is evidence of it everywhere you go in Beirut. It broke the relative calm Beirut had achieved after 15 years of civil war and was the beginning of a string of assassinations and a martyr culture that you witness all over Beirut in the form of posters of the people who were killed. It also kicked off massive protests, coined the Cedar Revolution, between the pro-Syrian Lebanese and the Anti âSyrian Lebanese. The Cedar Revolution was the ending of the Syrian military occupation of Lebanon which had lasted about 30 years (since 1976).

This is all recent history and the pain of those times are still felt around Beirut. Therefore this year, Walid just wanted to warn me that February 14th was a significant date and there may be protests around the city during the anniversary of the assassination. Everyone I knew agreed; if there were protests around the city I should probably not plan to venture out too far. I was never really sure why, but I learned to listen to my hosts, they understood this confusing country far better than I ever could.

Even though I didnât understand it all as intimately as the locals, I did observe a lot of the culture of war. Fifteen years of civil war and recent bombings in 2005, 2006, and 2008 meant the war culture was deeply sewn into the fabric of the Lebanese. These are observations that the locals donât necessarily notice, but as a visitor to their country, they stuck out to me like Sarah Palin in New York City.

The War is Never Forgotten
Everywhere I went in Lebanon there were reminders of the war and violence. Giant images of martyrs were hung everywhere up on bullet-ridden buildings. At first I thought it might be some sort of political campaigning, but when I asked about it the locals explained that it was people who were âfollowersâ of that person who had been killed. It would be as if we had a picture of Martin Luther King up on ever 10th building in New York City. It was different; it stuck out to me; yet I wonder if the locals really even notice it any longer. 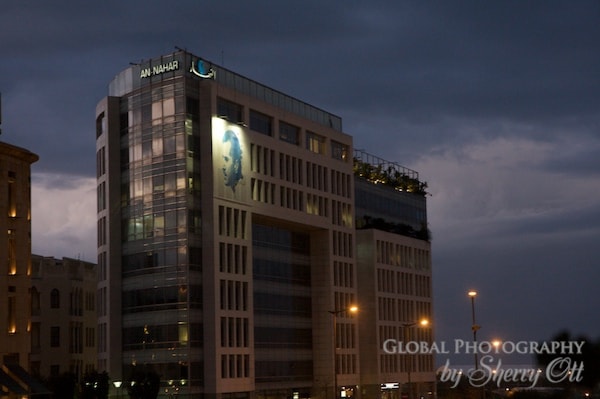 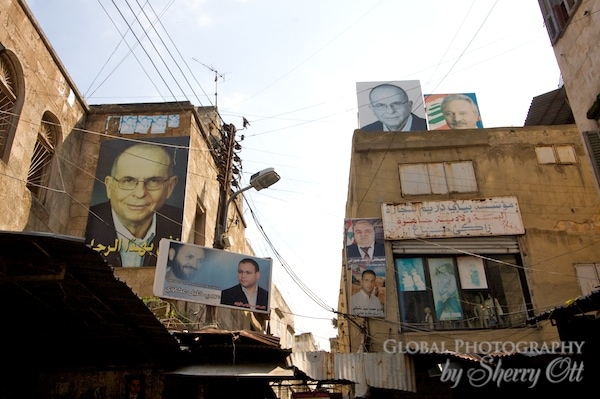 Faces of the deceased were always staring at you in Lebanon

The Holiday Inn skeleton which was the center of the massive militia fighting during the civil war still stands today towering over the city and the Mediterranean as a grim reminder; a giant gravestone. Often when I drove by the Holiday Inn eyesore, my taxi driver or my host would tell me stories of how they went on dates in the rotating restaurant on top of the destroyed building. It had been open for one year and was the nicest place in Beirut before the war started and it became the biggest battleground in Beirut. This is the same building where PLO leader Yasser Arafat set up shop and tried to fight the war. He was one of many militant groups who occupied the building at one point or another. Now it sits, not able to be destroyed, used by the Lebanese army to store tanks. Unfortunately itâs an eyesore and a constant reminder to the citizens of what life was like before and during the war. 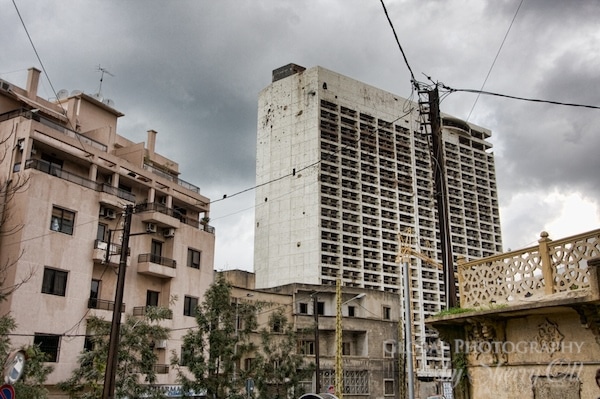 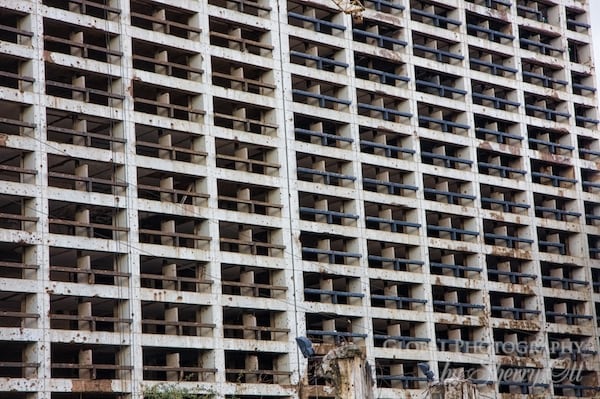 Riddled with bullet holes and gutted

Daily Life
Driving around Beirut and the country you will see army personnel everywhere; carrying large automatic weapons casually flung around their back. In the middle of downtown there will be tanks and officers with weapons strapped around their back just watching a corner; occasionally directing the crazy traffic. This was the first place Iâve ever been where one really felt the presence of the military so strongly. Next to hotels, nightclubs, any government officialsâ homes, and numerous check points along the main highway. This was also the first place that I carried my passport with me at all times. 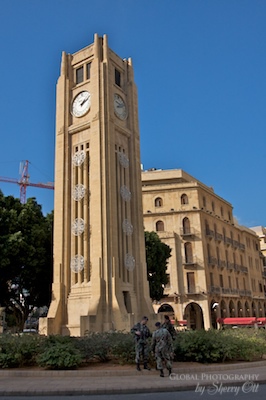 Look carefully to see the soldiers. Pictures like these aren't easy...soldiers don't like to have their photo taken!

Not only was war and conflict always visible, but it was woven deep into the psyche of the people I met. The people who stayed in Lebanon during the war or grew up during that time have a unique attitude about life; thereâs no time to wait. I was out one night with some new friends at a bar having a great time simply taking in the scene. However the next day my friend chastised me for not taking any photos that night. I certainly wanted to take photos; however I explained that I planned on using the first night to sort of scope out what it was all about and then take photos the next time I was out. When I told him this he just shook his head. He proceeded to give me a speech about how in Lebanon you have to live every second. You donât know if that opportunity will be around againâ¦you must seize it. The man was in his late 40âs and had clearly been involved in the Civil War in Lebanon; no doubt this attitude was created from the uncertainty of living in wartime. But I did realize â that unlike other countries, it wasnât as if wartime was ever over hereâ¦you didnât know if it was just dormant for a while and when it might pop up again as evidenced in 2006.

One of my closest friends in Lebanon surprised me as we were driving to Taanayel. We were driving up over the mountains and she was commenting how the original bridge we were on was bombed by Israel and the US actually helped rebuild the bridge (which seemed a bit conflicting to me since the US funds much of Israelâs militaryâ¦but will leave that for another day). I started asking her about what her family did during the war â stay or flee. She started to tell me her familyâs story and I was floored when she came to the part of the story where her husband was shot while trying to deliver goods (he was a supermarket wholesaler) to a customer in Hazmieh. The militants mistook his van for a threat and he was shot in the lung. She went on to say that this very day (Feb. 9th) was the anniversary of that incident in 1978. He lived, but has only one lung today. She was completely nonchalant about it all, while I on the other hand was stunned.

She also took me around Beirut to the childhood home she grew up in â only Â½ block away from the Green line which separated the East from the feuding West. Her home was near the epicenter of the beginning of the civil war. As we drove by her old home and I took pictures, she didnât seem phased by any of it and I was aware of how normal this was to her, but how abnormal it was to me. 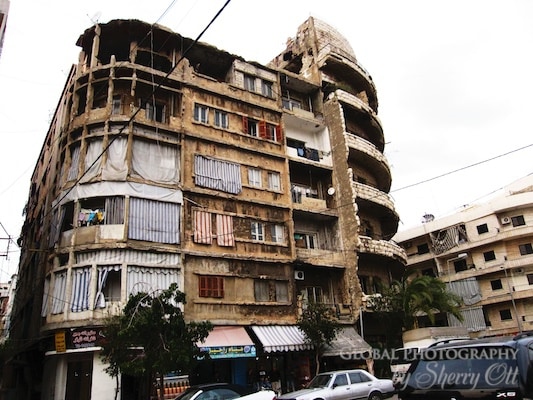 Yola's family home - top floor corner - yes, the one that is destroyed.

I also went and met with a Shia Muslim family. This family grew up in East Beirut and was hard hit by the war and the frequent bombings near the airport. As we talked about political views, religion, and international relations (all very normal topics in Lebanon) it was clear that in their eyes the whole country had digressed backwards since their childhood. As children prior to 1975 there were no divisions of religions â they played with Christian children and were oblivious to the difference. The neighborhoods were mixed. However, modern day Beirut is still extremely geographically divided by these imaginary lines of religions.

One person asked me how Americans ever elected Obama considering he had a Muslim background. I sat and thought for a bit and then I realized â it didnât really matter in America. Overall America separates religion and politics and even though at times it seems to play too much of a roleâ¦itâs nothing like the role it plays in this part of the world. It shapes the decisions, geography, politics, and lives in Lebanon. Like the man that asked me this question, most of the Lebanese arenât able to imagine a world in with religion wasnât intertwined with politics.

Normally when I travel to a new country I love to focus on the unique pieces of culture the country has to offer which I havenât seen before. Or a piece of culture which really is far away from my western culture. It was clear that for Lebanon my focus would be the war culture. After a month of taking all of this history and war culture in, I was exhausted; but equally intrigued and impressed with the Lebanese. Today Lebanon seems to me that it is still divided; yet united in some weird way.

View all photos of War-torn Lebanon:

9 Responses to "The Culture of War"