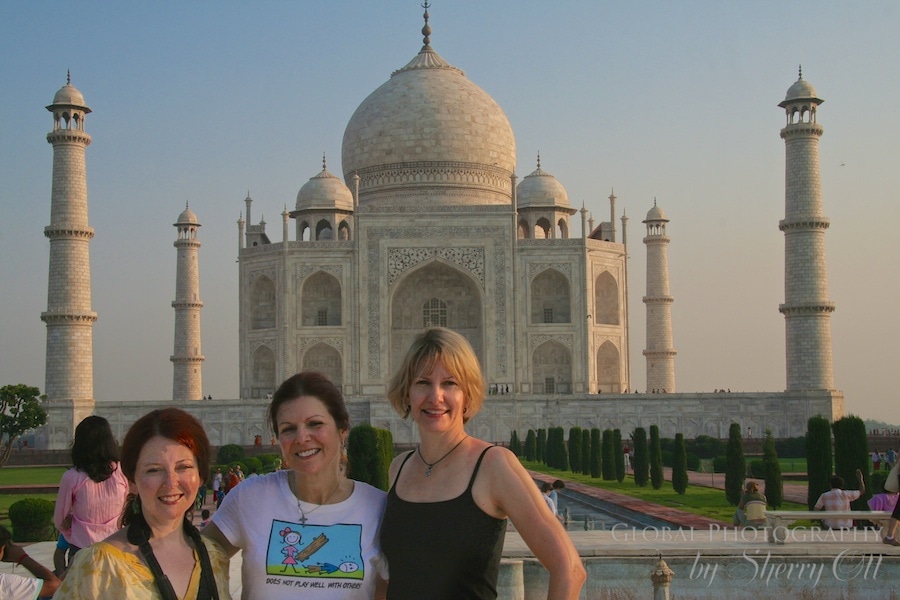 Youâve all heard about my wonderful experience teaching â however I havenât really spoken much about my living arrangements in Delhi. Sure the flats were livable, nothing spectacular, but livable. It was a good location, it had air conditioning, we had people cooking for us, we usually had hot water, we had cable (yet we rarely watched TV) â but the best thing about my living arrangement was that I loved my roommates. Sometimes Iâm amazed and a bit overwhelmed how well things work out when I seem to be the most vulnerable â but they do. The new friendships I formed with these 3 women will be life longâ¦I know that.

We were all different ages (35 to 47), and came from different parts of the US. Catherine was a lawyer in Michigan, Lynn was a nurse and grad student in Tampa, and Cate was a former HR Director turned jewelry designer in Boston. We were all single. However â interestingly enough Lynn and Catherine were both in long term relationships without the vows. The new trend of single, independent women we have no need to get married. None of us had kids, we all had/have good careers, are comfortable being on by ourselves, and were searching for something here in India. Maybe it was those traits that really brought us all together. Whatever it was â we were definitely in it together. This was one of the most effortless roommate situations Iâve ever been in â we all just clicked. We would sit around and talk about kids, social pressures, getting older, becoming wiser, marriage, relationships â itâs a good thing no men were rooming with us as they would have hated it!. I felt at complete ease with these women, and they knew not to talk to me in the morning until I had been up for an hour or so â for me â that is the sign of someone who really knows me.

Each of them had a unique, amazing quality in their personality that made me realize how lucky I was to know them. Catherine was a saint. She was placed at Mother Theresaâs Home for the Destitute and Dyingâ¦yet she quickly realized that it was really simply a home for the mentally ill. Her patience and tolerance was unshakable. Even when she would come home and tell us stories about working on puzzles with the patients and how one of the patients would come in the middle of the circle and squat and pee as the rest of the people scrambled to pick up the puzzle pieces â she still told all of this with a smile on her face. Her ability to get up and go back every day amazed me. She has a huge heart packaged with a lot of catholic guilt! If it wasnât for her, we never would have become friends wit our neighbors, or friends with anyone in the market. She broke down barriers because she would go talk to anyoneâ¦as if she was in the Midwestâ¦just meeting new people like normal. Not me â I had my guard up all the time, as you learn to do when traveling alone. Truthfully though, her thoughtfulness and concern for others was astonishing.

Lynn was placed at a slum to teach womenâs health to the locals. She would work so hard every day preparing talks for them, researching topics, and like me â she was rather attached to the people at the placement. I went with her to her placement one day to see her group. She was talking to them about tubal ligation. These women all had too many children and didnât want any more mouths to feed â so this was a very appropriate topic! I was taking photos and playing with the kids in the room when I heard Lynn ask the translator how much it cost to have a tubal ligation done here in India, the response was 40 rupees ($1 thanks to government hospitals). Lynn then told her translator â tell them that I will pay for it if anyone wants to get one. I perked up, looked at her and smiled. I think the authorities at the airport will have to check Lynnâs bags very carefully as she was trying to physically figure out how to take home a kid without anyone knowing!

Cate was on a journey of change, one that has endless possibilities for someone of her talent. Like me, she has left her long time corporate job and decided to come to India. She has been designing and making jewelry as a hobby and now she wanted to explore having it take more of a priority in her life. She knew what I have come to know â work should be something you love â not something you have to do. We bonded on many levels â religion (or lack thereof), corporate life, single, and even though she dressed like Charlotte from Sex in the City â she has a sarcastic, untrusting side that I loved. She was placed in a slum teaching women how to make jewelry so that they could eventually start to sell the products themselves and make money for their family (that is if they could keep any profits away from their alcoholic husbands). She was giving these women a skill, a way to fend for themselves â the feminist in me loved the work she was doing. I also accompanied her to placement one day to take photos and see her slum. After all, one day Lynn had taunted her âMy slum is worse than your slumâ â so I was going to be the judge of that little contest I guess. Even though it was hot, thick, and dark in the little school room that Cate worked in, she still looked like the vision of beautyâ¦her hair nicely pulled back, beautiful jewelry, colorful pressed sulwar and kameez â while I sat there having a heat stroke and sweating through my already wrinkled clothes and wiping my brow with a crappy red bandana that I have been carrying with me for a year. She sat there patiently and worked with each woman on their creations â giving them direction, helping them use the tools, and even teaching some of the young kids. I imagined her in a few years down the road starting her jewelry business with the assistance of women like these in India, providing them jobs and futures.

The 4 of us also traveled together â to Agra to see the famous Taj Mahal. The fun thing about being with established, successful women was that we could all splurge if we really wanted to â and let me tell you, in India â you get quite a lot for your splurging! We decided to hire a driver to get to Agra and stay in one of the 5 star hotels there for some pampering and the possible opportunity to be able to actually flush toilet paper down a toilet for the first time in weeks. The drive to Agra was like a 4 hour amusement park ride. I swear they could charge admission. The amount of vehicles, the types of vehicles, the conditions of the road, the dodging of cows that were crossing a 4 lane highway, and the groups of 50 people crammed in the back of a tractor wagon were all entertainment for us. However â we were happy to arrive at the Sheraton hotel in Agraâ¦an oasis of 5 star hospitality. We checked in and found that they had upgraded us to a suiteâ¦the Presidential Suite. It was truly Presidentialâ¦.3 bathrooms, about 1500 square feet, a kitchen, living room, dining room, and two bedrooms. As they showed us the suite we tried to act sophisticated, but as soon as the manager left, we giggled with joy and surprise at our posh surroundings. We also did learn that President Clinton actually stayed in this suiteâ¦see â I told you it was Presidential.

We ordered room service, had booze (for the first time in weeks), watched the international news, and enjoyed wireless internet in our suiteâ¦.truly heaven based on what we had been living in for the last 2 weeks. Lynn and I hired a guide and went out to check out the Agra fort. However, first he suggested that we go across the river and get a great landscape photo of the Taj Mahal. Of course we were up for it. We had to cross the river by the âlocalâ bridge â the one covered bridge in the area. Else â we would have bad to swim with the water buffalo and there were plenty of those in the river! The âlocalâ bridge turned out to be my highlight of the trip to Agra. It took us about 30 minutes to get across a 1000 ft. bridgeâ¦yes, we could have walked faster â and many did. We had a SUV and the bridge was jam packed with bikes scooters, tractors, rickshaws, cars, trucks, cows, dogs, and peopleâ¦plus us in our big SUV. Lynn and I stared out the window with our nosed practically smooshed against the windows watching all of the color, and the mayhem. The locals stared back with the same intense curiosity. This was the definition of cultural exchange.

The next morning we all got up at sunrise to go see the Taj in the early morning sun. I could tell you all about the Taj â but letâs just say that itâs beautiful breathtaking, and very symmetrical. It was definitely worth the trip to see it â an amazing building made from love. I thought that Catherine was going to break down in tears when she first saw it â as she had a picture of the Taj on her desk for the last few months â waiting to get there! As you can see â I took plenty of pictures â I always find it photographically challenging to take such a well known photographed monument and try to photograph it yet againâ¦and be different â so youâll see some of my attempts at thatâ¦some work, some fail.

Being with these women made me actually proud to be 37 and proud to age. I have felt like Iâve aged this last year quite a bit â but now I think that it was more that I have just grown into my age more. I look at this whole experience in India in wonder and amazement. At dinner our last night I told my 3 roommates, that I honestly couldnât have painted a more perfect experience here in India â from my volunteer work, to the friendships that I made â it was perfection.

See all of my India Photography from my trip

India Photography
Back to Blog