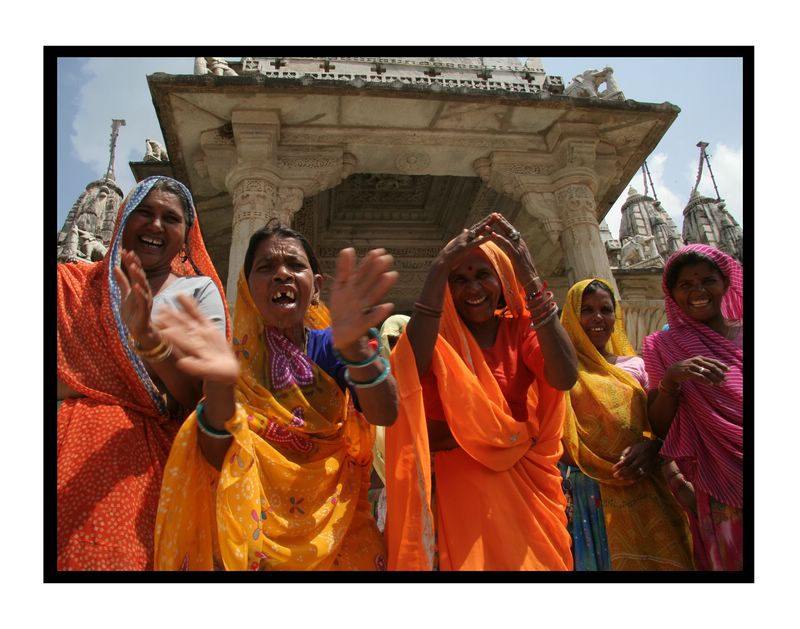 Women singing to me at the temple

For all snapshots of Udaipur and surroundings – click here!

My India visa was such a pain in the ass to acquire, I felt like I should use every ounce of it. My visa ran out on Sept. 15th, and my volunteer work was completed on Sept. 7th. I decided to take an extra 6 days to travel around India and see something besides he crowded streets and pollution of Delhi. When I was in Morocco earlier in the summer I traveled with a woman that had lived in India as a tour guide for 2 years. I told her about my free time on my visa and asked her where I should go â without skipping a beat she said âUdaipurâ. She proceeded to write down all the places I should go in Udaipur, the people I should meet, the hotel I should stay at, and the sites I should see. Considering I really hate trying to plan the details of travel, here she had laid out a whole itinerary for me, one that included rest, relaxation, good food and drinkâ¦I was set!

I had no idea that James Bond had been to Udaipurâ¦but he has. Just watch the movie Octopussy and you will see the Monsoon Palace and the City Palace transformed into a Bond-esq playboy setting. For me Uadipur was supposed to be less Bond and more R&R yet somehow it turned out to be neither, but a combo of both.

Udaipur is in the âstateâ of Rajasthan. It is known as a pretty lake town with many palaces surrounded by rolling hills of green in the monsoon season. This was a welcome change from the concrete of Delhi. Granted â there were still too many people to fit in the actual town, it was still loud, still cows roaming the street, still poorâ¦but it was in a smaller, greener setting!

I stayed in the old town called Lal Ghat at a beautiful old hotel that overlooked the lake and the palace in the middle of the lake. It had stunning views and inviting little window seats and cushions where you could sit, drink and widdle away the day looking over the lake. Of course, if you really looked at the lake â focused on it â then you would see that it was filthy with garbage and stagnant water, but after being in India for 5 weeks, I have learned not to look at anything too closely as you will just be disappointed!

I decided to go and meet the people that my friend, Karina, had told me see. As I walked out of the hotel I was met with a wave of the familiar âHello mam, where you from?â which always ended in âcome see my storeâ. Strangely in Delhi I hadnât been exposed to much of this â maybe due to the neighborhood we were living in. I had to pull all of my old tactics out of my memory bank againâ¦how to be nice, but clearly blow them off. Sure â there was tons of great shopping, and I did my share in 6 days, but before befriending shopkeepers, I thought I should take a look around.

I had decided that I wanted to take a cooking class that Karina recommended. I sent to the store and met Shakti. When I went in and told him that I was a friend of Karinaâsâ¦.the town of Udaipur opened up to me. Soon I was having chai (tea) with various people, hanging out on the shop stoop as if I was a long lost friend. Shakti continued to not only help me plan my cooking class with him â but he also helped me plan my entire 5 days in Udaipurâ¦I loved it! I continued to walk around the old part of town meeting Karinaâs friends and being welcomed with open arms. I felt fortunate to be traveling on my own, but to be so well taken care of.

I mentioned to Shakti that I wanted to see some of the countryside since I had been in Delhi for 4 weeks. He helped me arrange a day trip out to Kumbalgarh Fort and Ranakpur Temple. It was a full day of driving, but it was worth it. I was able to get out into the green countryside and see the villages. In Delhi I had seen the slums, but the countryside villages were different. The people were more adorned with piercings and bindis, and bangles. They actually worked the land for a living to survive as opposed to begging at the stop lights. The roads were strewn with barefoot men, women, and children carrying huge piles of sugar cane on their head, or herding cows across the road, carrying large water pots for a trip to the local well. Even though it was a 2 hour drive to the fort, it was entertaining to simply watch the rural life go by.

The other thing going by was my life before my eyesâ¦.many times. This was one of those car rides that I spent more time with my eyes closed out of fear than my eyes open. Sure â there werenât as many cars as Delhi, however there was one very small single lane road. My little tourist taxi sped down the road laying on the horn to try to get the cows to move. But cows never move fast enough â so the horn vs. cow battle always ended with us slamming on the break hard to let the cow pass. As I looked out the window at the cows, I did come to the conclusion that it was much better to be a rural cow than a city dwelling cow. The rural cows at least had lots of green grass to eat â a feast of sorts. However the Delhi cows just had garbage dumps to feast through. Besides the cows, the people and the goats to dodge along the road â the scariest site was when we met a bus or truck coming the other way. This was a single lane road â so when you met a bus â that meant you met it head on. My driver was fearlessâ¦if I were 13 again and playing âchickenâ in my back yard â I would want this man on my teamâ¦he never gave up. However â as a taxi driver playing chicken with an oncoming bus â well â I canât say that I was too happy about that. I would see the bus coming straight for us â my driver wouldnât flinch â he would simply lay on the horn and at the last minute he would veer off to the side narrowly escaping death. We encountered this situation frequently, and all I could do was clothes my eyes and wonder if this would be the last day of my life.

When we arrived at the fort â it was stunning. It had 36 km of wall surrounding it, undulating through the green countryside. This was Indiaâs version of the Great Wall. The fort was built in the 15th century. There were very few tourists at the fort â so I just slowly strolled around the grounds and the wall taking photos. However â as I was leaving I noticed there were more and more villagers coming to view the fort. I noticed this because they were starting to surround me. All of a sudden I was like the pied piper â I had a whole following of locals surrounding me â just staring. Some of the braver ones came up and said âHello Mamâ in their best English and extended their hand to shake. This was normally the only person in the group that new a couple of sentences of English. I would shake his hand and then everyone would smile in delight. They asked me my name. In my best Hindi â I said âMera naam Sherry haiâ â they erupted in laughterâ¦and talked amongst themselves repeating what I said in delight. They were completely entertained that I spoke Hindi to them. I continued to have groups follow me around, not talking to me â just looking at me. A very common occurrence in India.

Next we drove another harrowing life threatening leg to the Ranakpur temple. This temple is known for itâs secluded location and the 1, 444 marble columns. Each column is unique â carved differently. As I entered the temple I was taking pictures of the colorful locals that were coming out of the temple. Unlike the fort, the temple was filled with tourists â but mainly local Indian tourists from the villages. A group of women were coming out of the temple singing. Upon seeing me snapping photos, the women came over and started singing to me. I joined in clapping and snapping pictures periodically â they were tickled that I would participate.

As we were driving back to Udaipur for the afternoon, we did finally reach a larger highway â 4 lane divided hiway â a proper road finally. We were tooling down the road in the fast lane as there wasnât much traffic. I was dozing off a bit â until the driver slammed on the breaks. I looked up and saw a car coming directly toward us – going the wrong way on the wrong side of the road. My driver calmly slowed down and moved to the other lane as the crazy person passed. I thought to myself â this is the epitome of India drivingâ¦when I say there are no rules â I mean it. What fascinated me was that during the one time that using the horn was completely appropriate in a driving situation (when someone is coming towards you on the wrong side of the road/median) â the driver didnât use his horn at allâ¦not one peep. Thatâs India driving â functioning anarchy.

The rest of my time in Udaipur was spent exploring the City Palace, Lal Ghat, and exploring the shops! City Palace was a large complex of mirrors, colored glass windows and more people staring at me. The town was full of great trinkets, tailors, shoes, and the pashminas. I also spent a great deal of time hanging out with Karinaâs friendâs who included me as if I were a long lost friend. I was even treated to an Indian birthday partyâ¦complete with Bollywood music, dancing, and Indian Rum! After 3 days in the town â I think the whole town knew me â they simply called me America. âHey, America, come see my shopâ, âAmerica, let me take you for a ride on my bikeâ, âAmerica, come have chai with meâ. I very carefully chose what offers I was accepting â and most of them I kindly refused.

I enjoyed my trip out of Delhi â it was a chance to dip my toe in the rest of India. It made me realize what had been rolling around in my thoughts â I will come back to India. There is so much more to see here and Iâve only scratched the surface. On my last night I simply had a date with myself, celebrating my one year anniversary, at my hotel. It was a great way to end a relaxing stay in Rajasthan.
Photo:Me eating breakfast at my hotel Jagat Niwas Palace…a gem.