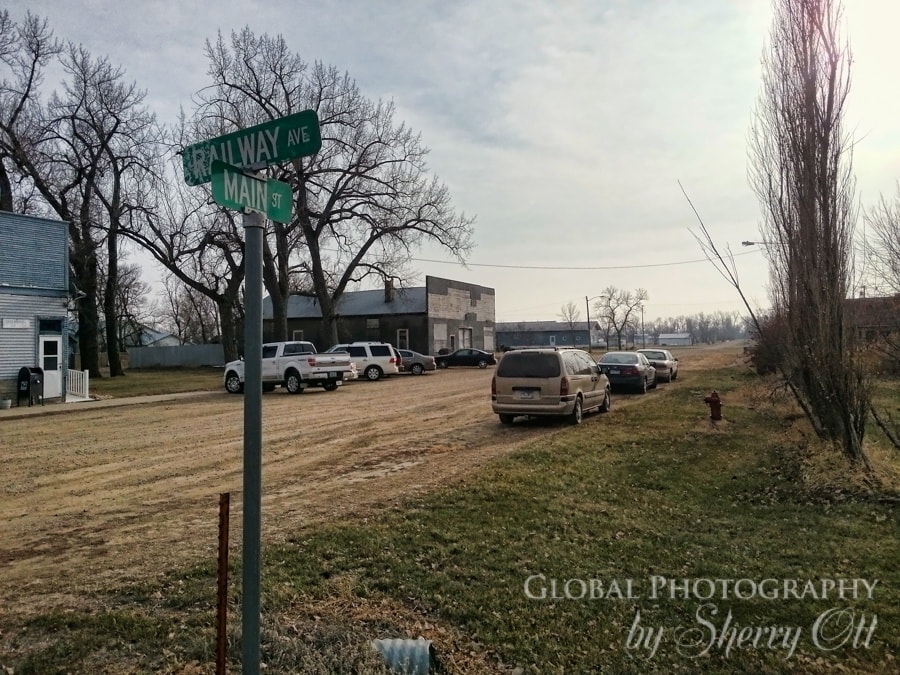 When I told my parents that I was coming to stay with them for a month, they seemed excited. Maybe itâs because then they donât have to talk to each other as muchâ¦or maybe I just provide entertainment, who knows. However my mother was particulary excited and started filling up her calendar with things that we could do in and around their small town community. The standard lunches were booked, church clubs, visiting with neighbors, but one of the items on the calendar stuck out. June 15th – Male Revue at Olâ Gunslinger in Twin Brooks. Yes, thatâs right â my mom had booked my calendar with a male strip showâ¦on Fatherâs Day. 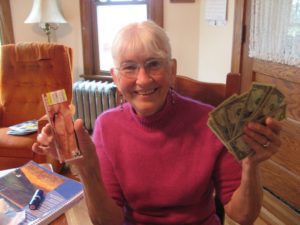 Mom with tickets and singles ready to go!

Granted, I did willingly agree to go, but from a journalistic point of view. The chance to see a traveling male strip show coming to a small town with a population of less than 50 people â how could I pass that up as a blogger. I knew my blogging audience would be interested in Midwestern America â and this was definitely a side of it worth sharing! Seriously â you all would have done the same. When my mom asked me if I was interested â I said âof course!â I told her that if I wanted to see men in underwear, I could just go to a gay club in NYC and watch them dance for free, but this opportunity provided much more than scantily clad men. I wanted to see the women from rural America that were going to this show. Plus, I wanted to see the men that were traveling the rural cities performingâ¦I was intrigued to say the least. I personally think that my mother had come to grips with the fact that I wasnât going to provide her with a wedding and a son-in-law, so this was her way of getting to go to the bachelorette party that sheâd never normally get to do. 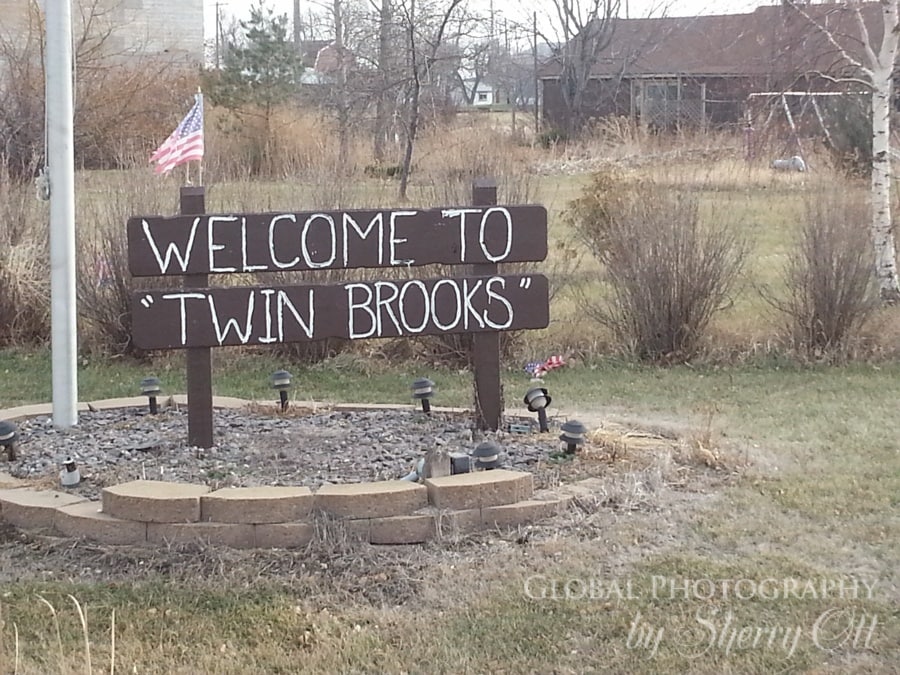 On the day of the big âshowâ, my dad and I went for a drive in the country to do some photography. Plus, it was Fatherâs Day and it was a nice way to spend some time with my dad looking at cows. Yes, I know, many of you went to brunch with your dadâ¦I went to go look at cowsâ¦not glamorous, but fun in its own way. We decided to drive through the town of Twin Brooks where the big âshowâ was that evening. I had never been to Twin Brooks, so I wanted to get a good look at it by day so I could get a feel for the place. I was utterly stunned when I saw it. Iâve been to small towns beforeâ¦but this place took the cake. Photo: Ol’ Gunslinger in Twin Brooks. Twin Brooks was flanked by railroad tracks that ran through the town and consisted of a post office (that also doubled as the town restaurant), a church that was closing itâs doors forever that afternoon after itâs service, and a barâ¦the Olâ Gunslinger. Iâm seriousâ¦that was it. They had a road called Main street which the post office and Olâ Gunslinger were located on â it was gravel. In fact, all of the roads in Twin Brooks were gravel. I thought to myself – what traveling ârevueâ show in their right mind would come here to perform?!

After our more traditional Fatherâs Day dinner, we cleaned up and my mom and I put on our Manolos and headed out to Twin Brooks. I was hoping it may be a bit livelier at night than what I saw that afternoon. I was also hoping that the permanent closing of the church had nothing to do with the male revue! We armed ourselves with 1 dollar bills, waved goodbye to my dad, and pointed the car towards hedonism.

A sign outside the Gunslinger warned us that it was Ladies Only. Iâm sure all of the men in the town were rather disappointed that we had taken over their one and only watering hole, but they werenât my concernâ¦I was here to see flesh! We walked inside the dimly lit bar and I immediately knew that I wasnât in NYC any longer. The walls were lined with animal headsâ¦big ones. Neon Bud Light signs were placed between the antlers of Bambi and the juke box was blaring Achy Brakey Heart.

I swear to you that Iâm not embellishing.

With our $15 tickets came a free drink â so I decided to forgo what everyone else seemed to be drinking (Bud Light bottles) and provide some class to the place â we went for the good liquor. There were 3 long tables arranged in a horse shoe with a backdrop for the âstageâ at the open end of the horseshoe. There were more colored lights than a middle school dance. We looked around in a bit of amazement â not due to the dÃ©cor, but because we were two of 10 people in the bar. This was going to be a long night. We sat down and surveyed the âcrowdâ. My mom said, â There are 3 gray haired women, 1 pregnant woman, and 4 fat women.â I was hoping she wasnât including me in the fat count. It was a rather sorry crew â but we were a part of it â so we really couldnât judge. My mom was one of the three gray haired women. The other two sat across the horseshoe from us sipping White Zinfandel. I was intrigued with them. Pretty soon a platter of jello shots were passed around. Apparently in addition to one free drink, we also got free jello shots. What exactly were they preparing us for? 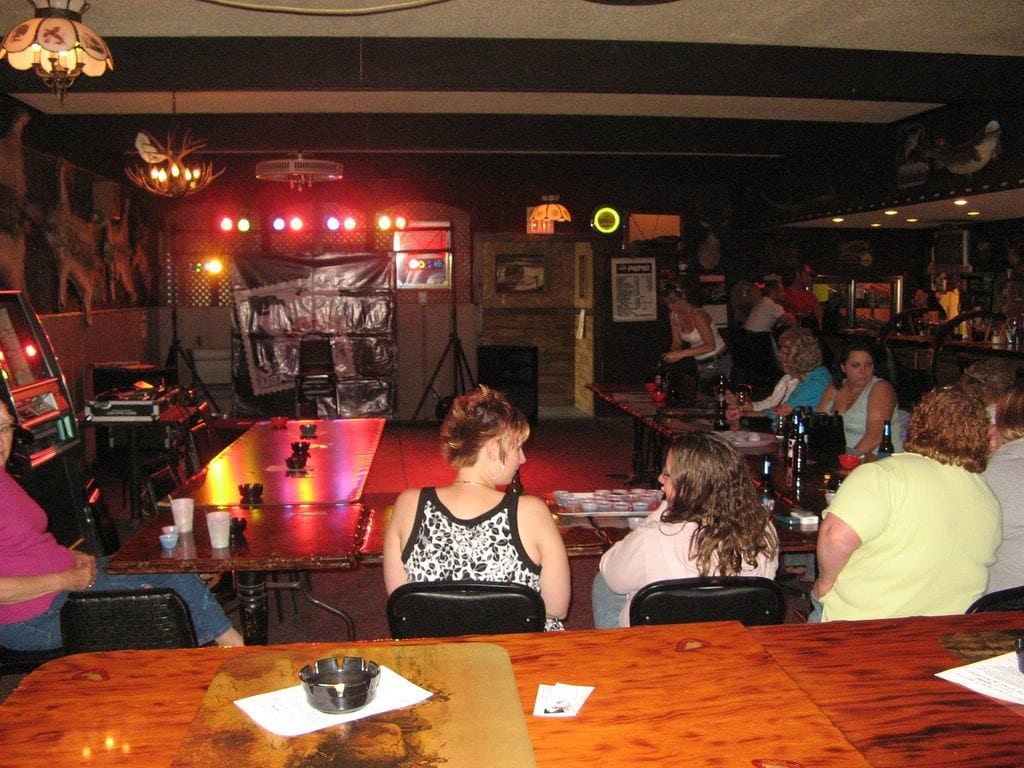 Inside the Gunslinger waiting for the show to begin…

Now Iâve made my share of jello shots. Those of you who have attended my parties are very familiar with my jello themes. However, these were hands down the strongest jello shots I had ever had. One more of those and I was going to get up and strip. Two more women showed up with gave us a whopping total of 14 in the crowd including us â the show was ready to start. I wondered just how desperate these men were who were coming out to strip for 14 women in a small town in the middle of nowhere. Iâm sure there is a reality show pilot somewhere in this.

There were 3 men and none of them had mullets, thank God. In fact â they were all pretty decent looking. My expectations were already exceeded on their looks â or maybe it was the jello taking hold. They were all big muscle men; they clearly spend hours in the gym. The question was â could they danceâ¦and were they straight? One was really youngâ¦looked like they pulled him right off the farm in Iowa, another was older and also served as the MC, and the third was a black guy that they calledâ¦take a deep breathâ¦Hot Chocolate.

I swear to you that Iâm not embellishing.

I was a bit hung up on the Hot Chocolate name â I wasnât sure if I should laugh, be offended, or feel badly. Regardless, he was hot. The night was filled with some goofy dance routines, lighting snafus, tons of lap dances, more jello, crazy kama sutra positions (I should have been taking notes), and my mom and I screaming and laughing through it all. A great mother-daughter bonding moment over jello and dancing men. No, photos of the show were not allowedâ¦sorry, no hot chocolate for you.

After the show, we went over and introduced ourselves to the other two gray haired ladies. We found out that my mom and they went to the same church; the joy of small town life. I liked those gray haired, Zinfindel drinking women. They were spunky in their sequin trimmed jackets. They were brave and progressive. They were a model of what I wanted to be like when I get old. However, I think my mom impressed me most. After all, she knew how to do a jello shot. Did I mention that my mother is 72?

Photos: Me and my mom enjoying the free drinks and jello shots

The show was pretty much what I expected. For those of you who donât know me personally â I donât normally have very high expectations when it comes to men. But it was a great night out; fun to watch and be a part of a once in a lifetime opportunity.

A slice of middle America; a far cry from Sex in the Cityâ¦but just as entertaining.

4 Responses to "Sex in the City – Small Town Style"