“Was he a big one?â the waitress asked.
“Ohhh yes, he was beautiful,” the older man said as he paused slightly as if to reminisce about the image in his head as he went on telling the story.

Edgar, works at the Churchill waste management facility and had reported the bear to the Polar Bear Alert Hotline the night before. Everyone in town knows the Polar Bear Alert hotline number; itâs necessary when your town is in the path of a polar bear migration to the sea ice.

This season thereâs been 263 calls to the hotline; people like Edgar call in bear sightings around the town. For Edgarâs bear, the Polar Bear Alert officers came out and scared it off (with loud gun pops) out of town. However, at 10AM the next morning they had another call; the same bear was near town. This time officers hazed it out and across the river. Normally when bears go across the river they donât come back, so everyone felt pretty good this bear/human interaction had been resolved. I could hardly believe all this happened while I sat in my hotel room this morning oblivious to the situation. 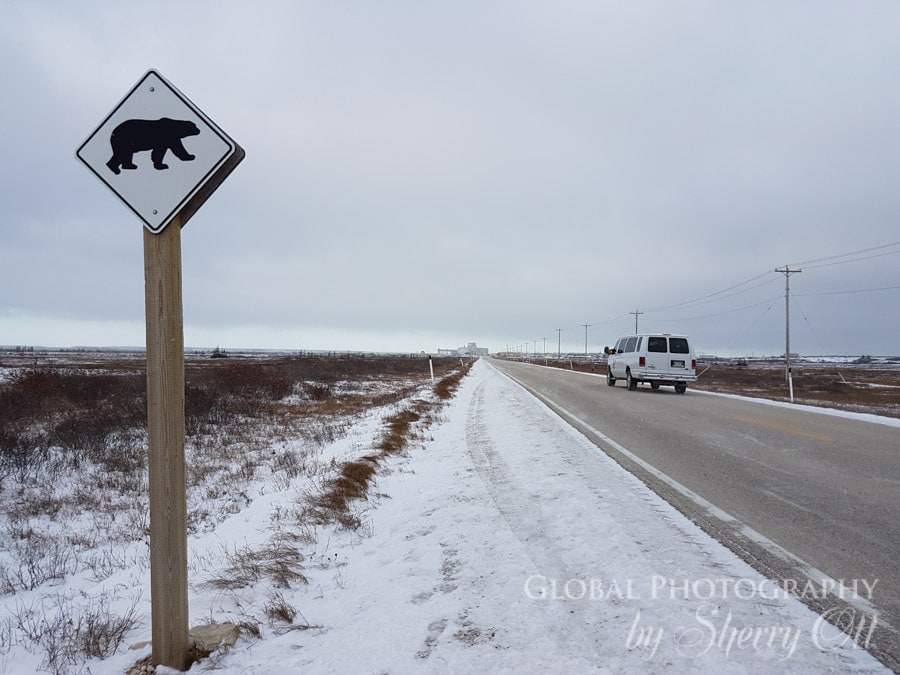 This is completely normal for the little town of Churchill in October and November. Bears get eager for the ice to form so they can hunt and eat again. Instinctively the bears know ice forms first near Churchill on Hudson Bay and gather there to wait. There are said to be approximately 1,000 Hudson Bay polar bears, and Churchill has a population of 800 people. This is a region where bears outnumber people.
Itâs also a town whereâ¦.

This is not your typical town.

I could tell you all of these things are because they live among polar bears in the region, but honestly that would be a hyped up lie. It does have to do with that, but itâs also simply because itâs a small town community, and thatâs what small towns do. Itâs the kind of town where if you stay 3 nights and walk into a cafe or bar on the 4th night, youâll know at least one person there youâve met previously. Yes, that happened to me.

“If we let humans and polar bears get together – the polar bear will always end up on the short end of the stick.â â local resident

In the past, the bears that were threats or near town were simply shot; 10 to 15 bears were shot a year in the 60âs and 70âs. It was a different time then, conservation wasnât really a big part of peopleâs vocabulary, and the easiest way to keep people safe was to shoot the bears.

âWhen the military was here it was a different attitude about the bears. Polar bears werenât considered an endangered species. We all had bear rugs,â said Sandra a native of Churchill.

Things have changed pretty drastically since that time, Churchill believes in conserving their bear population – and they have put a huge amount of effort into it. In 1969 the Polar Bear Control Program (now called Polar Bear Alert) was created. The program had three main objectives: to protect human life, to protect personal property from damage by polar bears, and to ensure polar bears were not unduly harassed or killed. 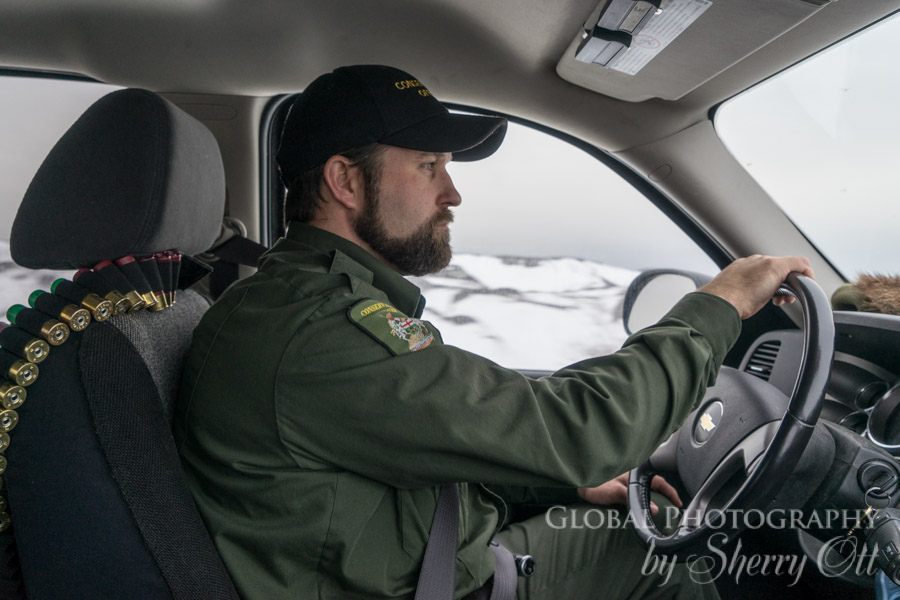 On patrol with Conservation officer, Jeff Chuchmuch around Churchill

They built a holding facility where they could keep bears that had come too close in contact with town and humans. The holding facility has 28 air conditioned âcellsâ and it sort of runs like a jail, even though they donât like to use the term jail! Bears are weighed, given an id number (tattooed), and âprior convictionsâ are checked to help them determine how long they will be held. They are given no food during their âsentenceâ. The bears rarely eat during this time anyway as they are waiting for the ice to form on the bay. Jeff, a conservation officer, explained they donât want to get bears used to being fed; else theyâll have a much larger problem on their hands.

But this begs the question â how do you catch a 1,200 pound problem polar bear? And how the heck do you release it?

Me sitting in a polar bear trap

Polar bear holding facility near the airport. While i was there 19 bear were being held inside

So far in 2016, 41 bears have been in the facility. Most bears are caught in large polar bear traps baited with seal meat in popular bear violation areas near town. Some are tranquilized from the ground or helicopters depending on the situation. The bears are then brought into the holding facility while they are âsleepingâ. They are taken out the same way.

No one is allowed in the holding facility except for the officers and researchers; no, I couldnât even flash media credentials and get a peek inside. However, most town tours will take you by the facility near the airport. Itâs weird to stand outside and know there are 19 hungry bears inside those walls.

Churchill has embraced the polar bear as their town âmascotâ â youâll find signs all over the town honoring their beloved bears. Even Gypsyâs bakery, the best and only bakery in town, makes polar bear donuts that look so temping thereâs no way you can pass one up.

A cement polar bear welcomes you into town

Street signs even have bears on them

Even the fire trucks have a polar bear!

The town does a great job of educating tourists about polar bear safety â maybe too good of job. I was on edge the entire time I was in Churchill. In fact one morning I walked back to my hotel alone in the dark and was pretty sure I was going to be a victim of a bear attack as my nerves got the best of me. Surprisingly though there are very few human fatalities caused by bears in Churchill. In fact the last one was 1983. However, there was a pretty horrific attack one Halloween night a few years ago, but thanks to quick thinking neighbors and community, everyone survived.

As a visitor, itâs hard to grasp what itâs like to live among polar bears.
âHow can you live here itâs so dangerous?â – a woman from New York City asked Sandra a local resident.
“At least our predators are a little more predictable,” said Sandra

The locals are used to taking precautions; like not going out walking at night, or not going down dark alleys or between houses where there is ample places for a sleeping bear to go unnoticed and be startled. Residents know where the âproblem areasâ are for bears and they stay away. In some ways it felt no different than New York City. You have to be smart and aware at all times. Itâs common sense.

During polar bear season, residents know not to roam the town at night. After the sun goes down, the small town even feels smaller. But there is one exception to the ânight curfewâ rule â Halloween.

Halloween Must Go On!

At 3PM, a helicopter lifts off near Churchill. But this helicopter doesnât have tourists in it for flightseeing, it has volunteers in it who are scanning the town perimeter for bears before kids take to the street for Halloween. It starts with a helicopter and then the ground patrols go on all night. Halloween patrols started in the 80âs in an effort to give the kids a chance to have a normal Halloween and not have to worry about bears.

I joined the Cook family in their Halloween preparations.

âDo you have rules like you can only eat so much at the end of the night?” I asked.
âNo,â Max said in an annoyed tone. âWhy would someone do that, itâs Halloween?â
Max clearly had a point of view and wasnât afraid to share it at 12 years old. Max and Kara, his 6 year old sister, were born in Churchill, and loved living there. Kara was not going to miss out on trick or treating and getting her bounty of candy. Little Kara was buried beneath 4 layers of long underwear and her rainbow unicorn costume. Even though most Churchill kids wear their costumes over the outside of their winter coats, Kara insisted on no coat, so her mom compromised with multiple layers.

It was a cold night, but it didnât seem to faze Kara, she bounded from house to house gathering candy with her dad. Neither one of them worried of bears thanks to the efforts of the community to keep the town safe on this special night.

Halloween patrols on the streets…and giving out candy

The patrol is a community effort including the Polar Bear Alert team (5 units), EMTs, Royal Canadian Mounted Police (RCMP), Fire Department, Town of Churchill, and volunteers from Manitoba Hydro; about 25 people total. Some of the teams are in cars patrolling the area and some are stationed in specific areas where bears are likely to wander into town. I joined one of the volunteer fire department teams in their warm fire truck, sitting with them for a short time to get a feel for their evening.

âPeople should be bringing you guys candy,â I said as I got in the warm idling fire truck.
âDid you bring any with you?â Mark asked.
âNo,â I answered sheepishly. I wasnât off to a good start, but luckily they gave me a second chance.

One of the volunteer fireman, Mark, had been volunteering on Halloween night for the last 10 years. When asked why they do it, they all agreed that it was important to give back when you live in a small community. Everyone has to work together and it doesn’t just occur on Halloween.

Churchill may be cold, small, and full of bears â but it has a vibrant tight knit community that welcomes nearly 12,000 tourists every year. You may come for bears, but donât overlook the people that make up this town!

Beyond the Polar Bears

I stayed 3 nights in Churchill as part of a Frontiers North Polar Bear Tour.Â  The town not only embraces their bear culture, but also their Arctic culture in many ways. For a town that only takes 15 minutes to walk end to end, they also have a great museum, Itsanitaq museum, that highlights not only polar bears but Inuit art and various carvings. In addition, there is a Canada National Parks office there that offers great insight into the history of trading and the area parks.

I was a guest of Travel Manitoba and Frontiers North during my time in Churchill, however all opinions here are my own.