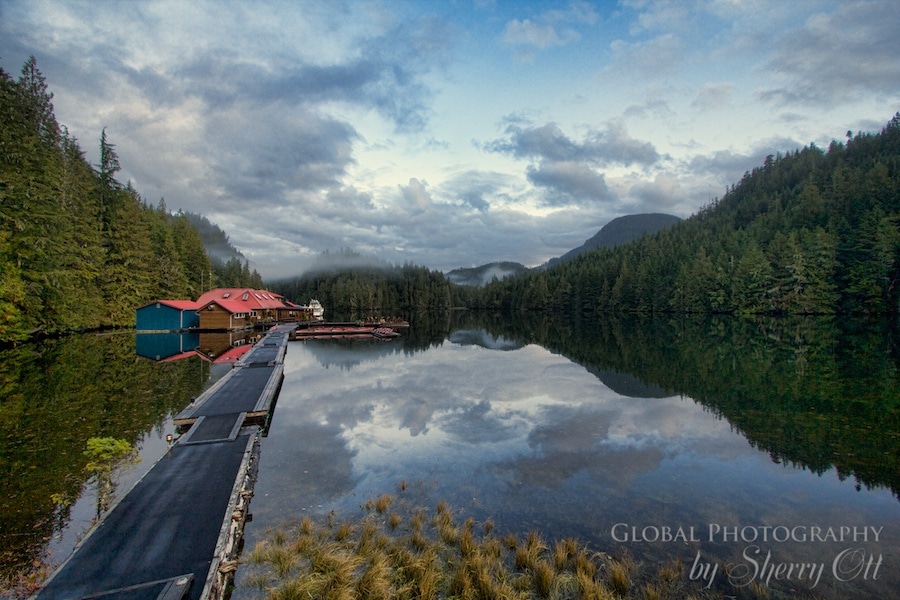 My shoes squeak against the rubber âno-slipâ mat of the Nimmo Bay Resort walkway, the air is heavy and the walkway sways ever so slightly reminding me Iâm not on solid ground â Iâm actually floating.

Heavy mist and fog blanket the area in the morning making you feel like the trees are somehow magnets collecting the low hanging clouds in their magnetic field and beckoning them to stay.

Then is hits me, the smell of maple syrup, itâs like a wall of flavor that smacks you in the olfactory nerves and immediately reminds you that you are in Canada. The maple smell is not coming from the millions of trees surrounding me; itâs coming from the floating bakery where Chef Dustin is busy making homemade granola with maple syrup. How can you not love this unique little resort floating in Nimmo Bay?

How to Get to Nimmo Bay Resort

I arrived at Nimmo Bay the night before by a series of planes that reminded me of Russian stacking dolls; each getting smaller and smaller the closer I got. The last plane was a float plane. The are no roads in this part of British Columbiaâs Great Bear Rainforest, so the only way into Nimmo Bay is boat, float plane, or helicopter.

Soaring above the islands and inlets from Port Hardy was mesmerizing. Rainbows graced us with their presence, the sun broke out of the rain clouds and I practically expected a unicorn to appear. 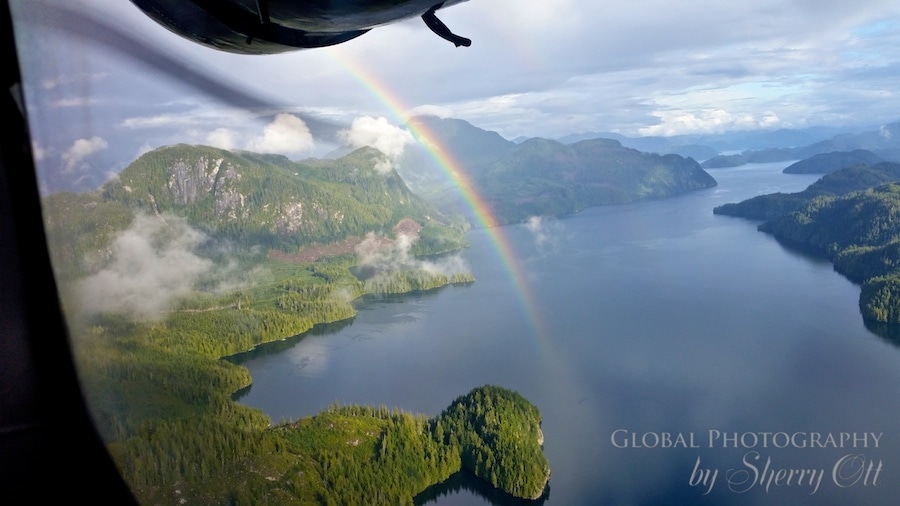 Rainbows from my float plane window!

Smiles everyone, smiles! As the plane pulled up to the dock, a whole team of smiling people were standing on the dock ready to great us. As I looked out of the little plane window, I had childhood television flashbacks of Mr. Roarke. It was as if we were arriving on Fantasy Island however, there were no white tuxes â but there was plenty of fleece.

It takes a unique group of people to work out on a remote resort in the rainforest. First, it takes a love of the outdoors, and second you have to be able to work âoff the gridâ in a way for 6 months at a time.

The family-run resort started back in the 80âs. Floating platforms and raised docks created this small community among the trees. Fraser and Becky run the place with an amazing crew of dedicated nature lovers. Fraserâs parentâs started the Nimmo Bay Resort and are now semi-retired, living nearby in a bit less remote community.

Fraser has taken over the business and continues to build onto it. New cabins are being built this off-season to accompany the yoga/massage room, bakery, lodge, staff living quarters, hot tubs, gift shop, and dry room filled with gear. 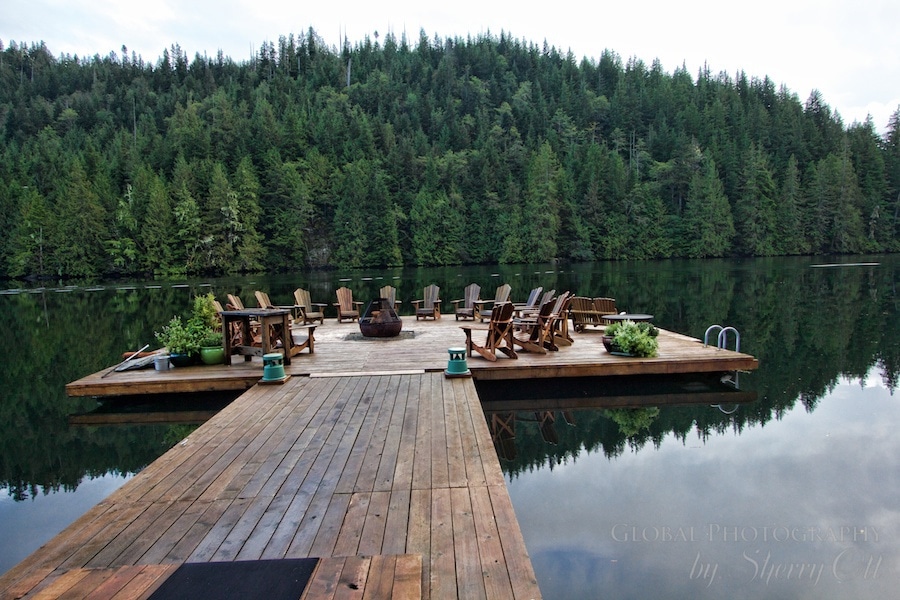 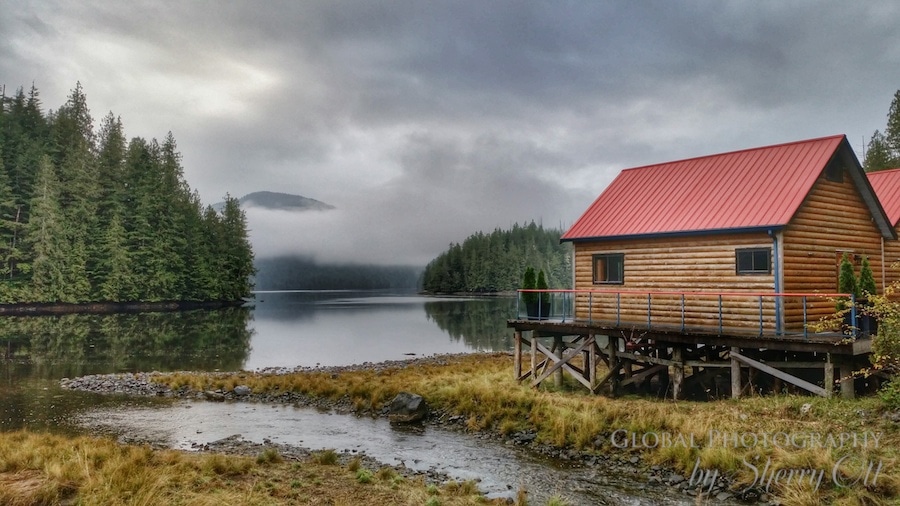 Cabins with a perfect view

What to do At Nimmo Bay Resort

The hardest part of each day was just deciding what to do in this wilderness wonderland. I personally could have just stayed at the resort all day or gone hiking and been happy, but the resort is actually set up to get out via boat and view the wildlife during the day and then come back together in the evenings.

The area is known for itâs fishing, whale watching, sea lions, and bear watching; Nimmo Bay Resort is the perfect hopping off point for all of these activities. Plus they had 3 helicopters at their disposal, which made getting even more remote easily possible.

Upon returning at the end of the dayâs activities you had more choices. Stand up paddle boarding, kayaking, hot tub, massage or drinking wine on the floating dock by the fire pit all before dinner.

I chose to relax and soak in the hot tub sipping wine. The sound of the waterfall was mesmerizing as I sunk deeper into the hot tub – it was hot, but it felt good. I closed my eyes and imagined all of the stress oozing out of me in little droplets of sweat forming on my forehead â by wiping my brow I was in essence wiping away the stress. Life was pure and good in the Great Bear Rainforest.

Suddenly there was a commotion in the hot tub next to me as two of the Texans who were on a fishing holiday were causing a ruckus, splashing about getting out of the hot tub. I opened my eyes and made eye contact with them as they were running down the stairs towards the waterfall.

Upon making eye contact, one stopped and came back to me and said in a southern drawl, âCome on â come in the waterfall with us, â he yelled urgently, âyou have to come nowwww!â His words trailed off as he seemed to hook me like a fish and tug me along towards the powerful waterfall down the wooden steps.

I took the bait and just followed not knowing what else to do. My feet went into the water and it took about 4 steps for the reaction to hit my brain â holy shit itâs cold! But now I was committed, I had to continue.

I got close to the spray slowing down with each fanatical step. I quickly dove under the spray and came up under the backside of the waterfall where the other Texan was. We both stood there shaking in cold excitement with big grins on our face. He then gave me the thumbs up and down we went again under the spray, running out of the water on the slippery rocks as fast as we possibly could.

Now I was awake. Really awake. Every neuron was firing, every little hair follicle on my body felt like it was rejoicing – it was completely invigorating â the quickest jolt to the system Iâve ever had. 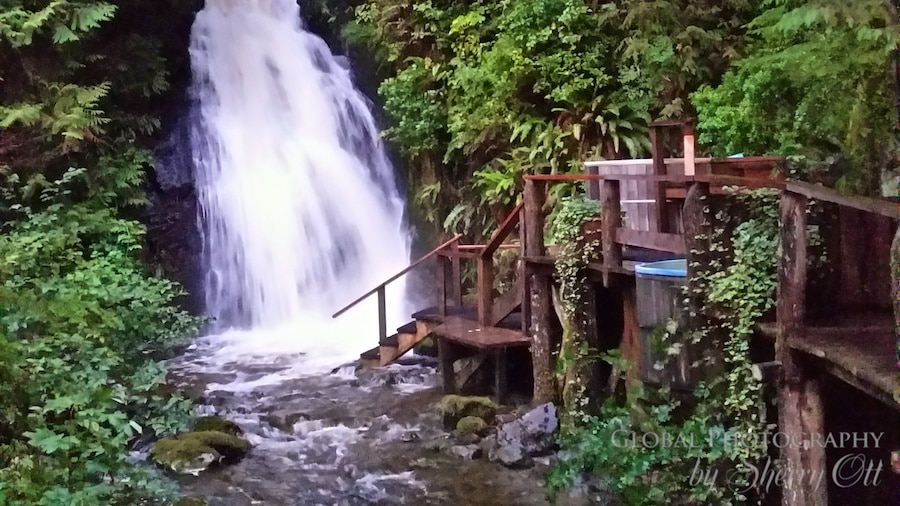 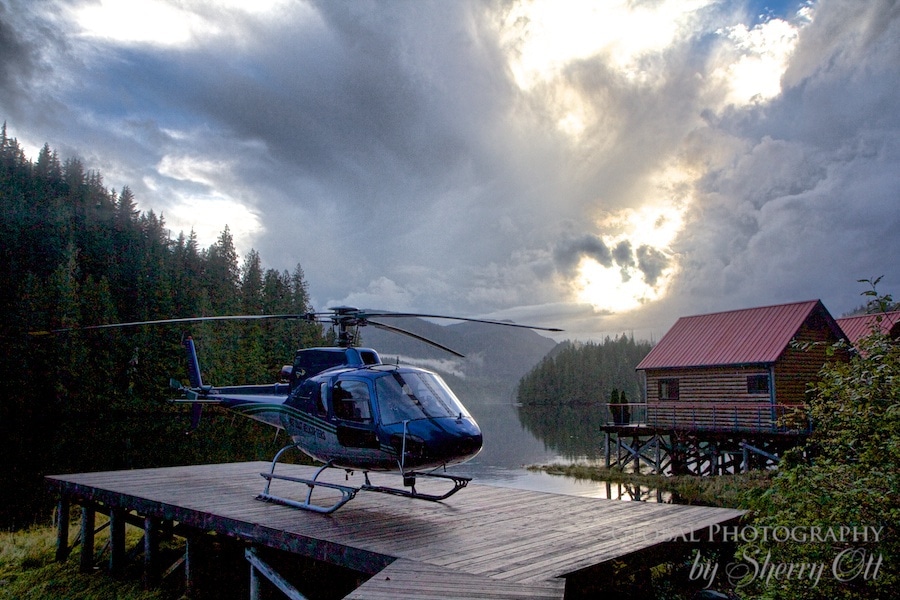 Resort Food – From Bay to Table

Chef Sandi must have the nicest view out of a kitchen Iâve ever seen. Her kitchen has a big picture window that looks out on the water and the floating dock. She was always found working in front of it talking to people as they pass by and providing the general vibe of the lodge.

She worked tirelessly to provide 2 big meals a day for about 20 to 30 guests during the season. While we were there she whipped up incredible meals highlighting the local seafood such as smoked salmon. In fact â we had some sort of seafood every night with the last night ending in a crab feast â pure decadence. 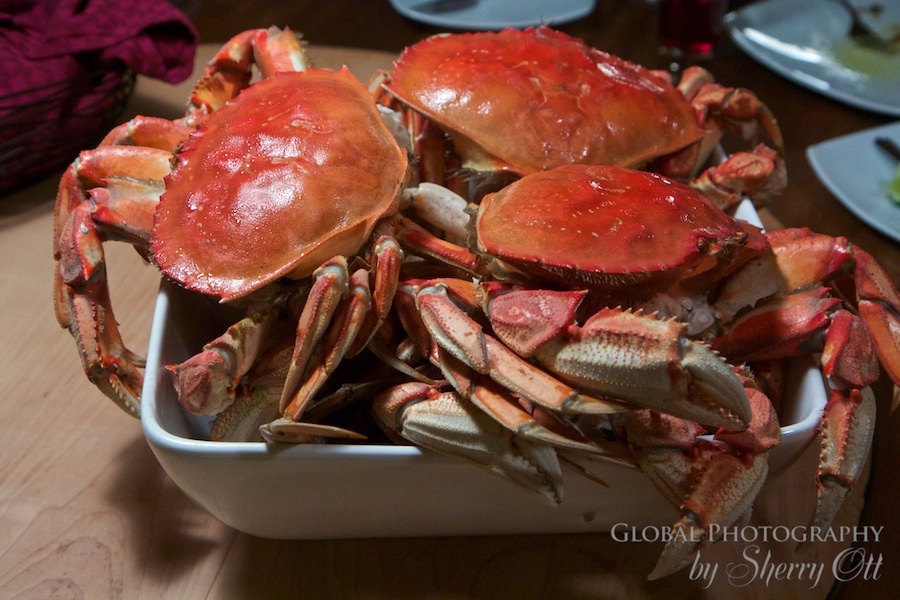 The sound of the waterfall is always present at the resort â varying in sound and strength depending on whatâs happening miles away in the rain forest. This morning it was roaring after a night of rain.

The waterfall is actually the heart of this wilderness lodge. The majority of the lodge is powered on hydroelectricity using the waterfall as the source. In addition, it provides all the water for the facility.

That waterfall that I stood under also powers the light bulbs and allowed me to brush my teeth â talk about multi-purpose. And considering we are in a temperate rainforest â thereâs plenty of water to keep things going.

Yes, staying at the Nimmo Bay Resort is a splurge at $1500 to $2000 per person per day (all inclusive), but it will be one of the most memorable places youâll ever go. In fact, itâs the sort of place where all of your fantasies may come true as you float in on de plane, de plane! 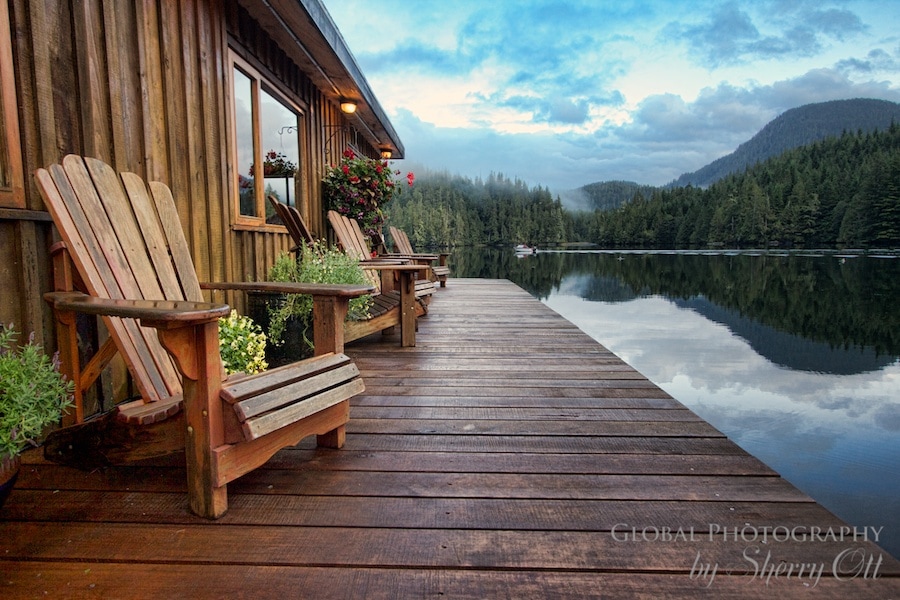 Take a seat and enjoy the silence. 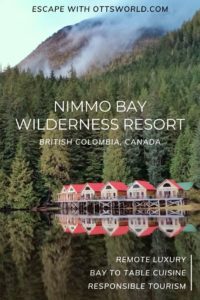 Disclosure:  For this trip to the Great Bear Rainforest, I am a guest of BC Tourism.  However all opinions expressed here are my own.