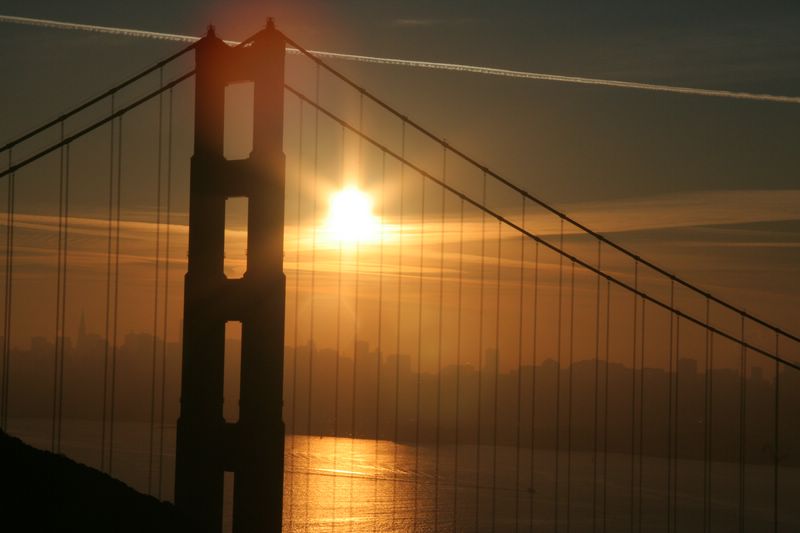 Believe it or not, Iâm not writing this post about China, Iâm writing it about America. If you may remember â I had a post not too long ago while I was in China about the lack of fortune cookies â what I thought was a Chinese tradition. Well, along with the great myth of being able to see the Great Wall from outer space, you can now include the fortune cookie birth. Fortune Cookies are not Chinese â they are American specifically Californian.

My first stop on US soil was in San Francisco. My home from 2000 to 2003 â a place that I never thought I wanted to leave. I still do believe San Francisco to be the most beautiful city in the US based on sheer beauty and size. You really canât beat the hills, surrounded by the bay and sweeping vistas, dotted with brightly painted houses and green parks. As I rode into the city from the airport, it felt like it was still the same city I left years ago.

One of the great things about living in San Francisco as opposed to visiting San Francisco is that you saw the other sideâ¦the non-tourist side and in my opinion â the much more interesting side. Sure â if youâve never been there before â I highly recommend riding a cable car, walking over the Golden Gate Bridge, tour Alcatraz (one of my favorite audio tours ever!), taking a day trip to wine country, seeing Haight Ashbury, and walking up the steep hills taking in the views and the colorful Victorian houses. However if you want to get off the beaten track a little bit more â then I would spend an afternoon in Golden Gate Park people watching and taking in the smell of eucalyptus trees, explore the old buildings of the Presidio, spend a day in the Mission eating a burrito and looking at a grittier side of San Francisco, head to Marin and hike in the headlands, or find the coastal trail that takes you from the Golden Gate Bridge to the Cliffhouse to enjoy stunning views or the Pacific Ocean. San Francisco is about being outdoors, so thatâs where I like to spend my time.

Since I was returning to San Francisco, most of my week was spent freaking out about being back in the US, and the rest of it was spent reconnecting with old friends answering the popular questions â âSo what are you going to do now that you are home?â, along with âWhat is your cell phone number?â It was great to see friends however the whole experience was a bit taxing on my brain as I never had an answer for either question. My friends threatened to disown me if I didnât get a cell phone soon â yet I must admit â I liked being inaccessible â it reminded me of being in another country âno one could get a hold of me, no one knew my whereabouts every minute â I wasnât ready to be found just yet.

However I was able to steal away a day or so to be a tourist in this familiar city. A friend of mine, Scott, who also has an enthusiasm for photography and the less traveled path picked me up early one morning and we went out to shoot some areas of San Francisco that I had never really seen before. However â first we had to stop at the familiar site of the Golden Gate Bridge. The sun was rising over the city and there are not many other scenes like it â I wanted to capture it in photos. We went across the bridge to Marin and took the first exit into the headlands â basically setting ourselves up for a spectacular view of the sunrise over the city and the Golden Gate. We drove deeper into the headlands and to some of the beaches that were all but deserted â and to our surprise closed due to the recent oil spill in the San Francisco area. We drove back into the city and made a breakfast stop at the famous brunch spot, Mammaâs in North Beach. Even though it was âfamousâ, I had never been there before, so it was a treat for me – well worth a stop for a few thousand calories.

Next we swung into China town amongst the cable car museum and Chinese restaurants. Scott knew of a place in a little alley that made fortune cookies. Finally â I would get to see where it all started! Actually, I have since done a little research on fortune cookies and came across the following history:

The history of fortune cookies dates back to the 13th and 14th centuries when China was occupied by the Mongols. The traditional lotus nut paste moon cakes were used in which to hide secret messages regarding the date of a popular uprising against the invaders. The moon cakes were distributed by the patriotic revolutionary Chu Yuan Chang (disguised as a Taoist priest) who was safe in the knowledge that the Mongols had no taste for lotus nut paste. The uprising was successful and so the basis of the Ming Dynasty was formed. The transition from moon cakes to modern-day fortune cookies was born out of necessity in the hard days of the American gold rush and the railway boom. When the Chinese 69’ers were building the great American railways through the Sierra Nevada to California they put happy messages inside biscuits to exchange at the moon festival instead of cakes, and so fortune cookies began in the US. Fortune cookies became common in North America in Chinese restaurants after World War II. Desserts were not traditionally part of Chinese cuisine, and the cookies thus offered Americans something familiar with an exotic flair.

Leave it to Americans to add calories to our meals! As Scott and I walked through the streets of China town, I felt at home in a way, my surroundings were familiar at last. Since I had arrived on US soil, I found that I wasnât used to the pristine look of the US yet, and the Asian culture seemed more comfortable to me. Down a little alley, we came across an open door where there were a couple of women seated folding fortune cookies by hand. The old machine was a joy to watch â the batter automatically pouring into the little round plates that would swing around on the âconveyor beltâ cooking the sweet batter so that it was soft. The women would then pick up a fortune, pry the round cooked batter off the conveyor belt, and pinch it all together, placing it in a cooling rack. It was everything I thought it would be â a local operation, little English spoken, bad fluorescent lighting, and to top it off you had to pay them a dollar to take their picture â I felt like I was back in Asia! The only thing missing were the little white face masks that people normally wore for germ and pollution warfare.

We continued on our trail for the little-known and absurd that afternoon. We next drove to the city dump where Scott had recently discovered a strange collection of lawn ornaments worth photographing. In my 3 years in San Francisco, I had never visited the dump before, so I was rather excited about exploring the new areaâ¦albeit smelly new area. To my surprise the dump was rather nice. It was located in South San Francisco, and like most everything in San Francisco â it was clean. I had always joked around about the big difference between San Francisco and New York City was how the garbage was collected.

In San Francisco the garbage men had a key to your building and would collect the garbage stored in a back alley of your apartment â stowed away so no one could see it from the street â giving this illusion of Disneyworld. However, in New York City â the garbage bags sit right out in the middle of the sidewalk for dogs to pee on, homeless people to shop in, and pedestrians to hurdle over it. So I guess it shouldnât have surprised me that the San Francisco dump was actually nice â and it even smelled goodâ¦donât ask me howâ¦but it did. We pulled up and parked at the lawn waste area and immediately our eyes were drawn to the little hillside surrounding us. It was full of old lawn ornaments â all set up on proudly on display! I chuckled as I scanned the area and found a Jesus, next to a grave stone, next to a Santa Clause, and a big plastic can of Red Bullâ¦I mean really â what a combination! Iâm not sure which one I should put my faith in! There was even a little area of old, yellow toy dump trucks displayed on the hillside.

After getting our fill of the dump we continued South into Burlingame to find the Pez museum. In a suburban setting next to a gas station and Honda dealer we found the worldâs only Pez museumâ¦colorful and sugaryâ¦just as you would expect. It was a small room, but it only cost $3 to enter and see the large collection of Pez containers. They had everything imaginable there including the worldâs largest Pez container. We listened to the Pez enthusiast provide us the Pez history, took some photos and drove back north towards Ocean Beach and the Sutro Baths. The Sutro Baths were a large privately owned swimming pool complex built in the late 19th century. The building housing the baths burned down in 1966 and was abandoned, but there are some ruins that remain â but take your imagination with you as the ruins are few. Regardless, there are stunning views of the ocean and this is also near where the coastal hiking trail is located.

At Ocean Beach we found daring surfers willing to jump in the icy, rocky waters of Ocean Beach heading out to catch a wave â the epitome of California. As I sat there slightly chilled in the typical San Francisco weather, I was taken aback at how it all seemed as if I had never leftâ¦everything felt the same. However I was most impressed with the fact that I had traveled all over Asia, and finally, I could find a fortune cookie â American Made!