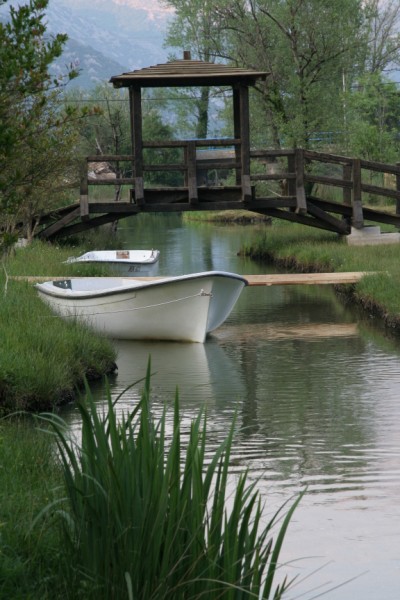 My best travel moments are the unplanned ones. I spent most of my corporate career planningâ¦budgets, delivery dates, resource needs, tasks on a project plan, and I even planned what I was going to say – my work life revolved around planning. So when my taxi driver in Dubrovnik suggested that he can take me and my friend on a day driving tour of Montenegro â I was intrigued. The taxi drive from my hotel in Lapad to Old Town Dubrovnik only took 10 minutes, but it was impactful. Honestly, I had NO idea where Montenegro even was â or that it was an independent countryâ¦but it sounded exotic, unusual, and unplanned so I was ready to take the bait.Â  Plus it would be another country that I could add to my ever growing list. In fact, this would mean that I have traveled to 6 countries in one monthâ¦a new record for me! However, I did have to think about my travel partner, David, who was arriving that afternoon. As much as I like to make quick gut decisions, I though it best to discuss this unplanned adventure with him first. I told Mio, my taxi driver, that I would think about it. He said that he would discuss it also with my boyfriend when he picked him up from the airport that afternoon.

When David arrived and we got through the excitement of seeing each other, we discussed Montenegro â it made me feel better that he too didnât really know where it was or anything about it! Apparently we both needed a history and geography refresher. We discussed the fact that Mio seemed like a good guy, he spoke English well, and he was from Montenegro â the makings of a good guide! The price seemed high, but we both agreed that if we could negotiate a lower price, then weâd go. I felt as if I were back in Asia at a market trying to negotiate the âbest priceââ¦how fun! Mio was obviously not familiar with the Asian negotiating game as he accepted my first suggested price. It was set â he was to pick us up the next morning at 9AM.

We knew nothing more than to bring our passports as it was only a 50 km drive to the border. We didnât know where we were going within Montenegro, how long weâd be gone, or if weâd stop for lunch. Luckily, Mio was a complete professional which just goes to show that you have to trust your gut sometimes. He picked us up outside the Old Town walls, drove us to a fabulous lookout point to get out and take pictures of Old Town and then he proceeded to tell us exactly what to expect out of the day. He had a map and showed us where we were going to visit, where weâd stop for lunch and started explaining the history of Montenegro. From the moment we sat in the car, he started educating us â it was wonderful â like a Lonely Planet Guide come to lifeâ¦but better as we could ask him questions about anything!

Photo: Mio, David and I at lunch…beautiful setting!
Sure we learned a ton about Montenegro, but in a 10 hour tour, we also learned about him. He grew up in Montenegro, was on the Yugoslav Olympic judo team and traveled all over Europe competing for Yugoslavia. He met his un-athletic wife in Dubrovnik as he was competing â it was love. Now heâs settled down with twin teenage sons in Dubrovnik. Throughout the day we learned about his view on politics, raising kids, and marriage. I liked Mioâ¦I liked him a lot. He had a great view and perspective on the world, family values, competition, and athletics, and I was amazed at how similar our views could be halfway around the world. He was just a good, solid, moral guy.

Â On the map he explained that we would drive around the fjord and visit the towns surrounding it â Budva, Kotor, and Sveti Stefan. I searched my memory bank for my last fjord experienceâ¦New Zealandâ¦but apparently this one was different. The Montenegro fjord was the only warm water fjord in the world.

The other amazing fact that we learned is that Montenegro only became a recognized independent country last year on June 28, 2006. They became the 192nd member state of the United Nations at that time. Up until then, Montenegro and Serbia were a state (combined) and the people voted to separate from Serbia and go it on their own. However, youâve probably heard of Montenegro from is warring, relatively recent past. In the early 90âs, as the Yugoslav Republic crumbled into independent states/countries Montenegro (as a part of Serbia) was involved the Bosnian-Croatian-Serbian War. It was the typical clash over borders, religion, and ethnic cleansing.

Technically it was off season along the Adriatic Coast â but it didnât feel like it as we had amazing, warm weather. It made it even more confusing when these beautiful little resorts, towns, and beaches were completely empty. They were some of the nicest beaches and vistas that I had seen throughout all of my travels â yet they were empty. The beaches and resorts looked like they could have been backdrops for movies setsâ¦truly stunning.

One of the first things we noticed was the trees in Montenegro and Croatia. The hills were dotted with these dark green Cypress trees jutting up above the other foliage. It looked like pinnacles rising from the hills.Â  Mio took us down the less traveled road and we went through the border crossing with no issues. In fact â it felt as if we were the only car that came through that border crossing all day! Since I have become a world traveler, getting stamps in my passport is like cocaineâ¦you want more. So I was happy to get my fix regardless of how big or small the crossing was! We drove around the fjord amazed by the scenery. The cypress trees disappears and it was tall rocky mountains that melted into the sea. It was hard to get a real perspective on the height of the mountains until you saw a little village at the bottom.

It kind of reminded me of the Sounds of Music! We road a ferry across the fjord and eventually stopped in Budva. Mio explained that during the summer months Budva was filled with young tourists as it had quite a party reputation. Now, it was full of locals and tons of ongoing construction getting ready for the influx of visitors. We walked around the Old Town walls â which was much smaller than Dubrovnik, but a similar feel â narrow streets, and little cafes. We had a snack there by the walls and then took of for a unique little area called Sveti Stefan.

Sveti Stefan started as a little fishing village on an island. Eventually they built a man made peninsula to the coast line , so I guess it can no longer be considered an Island. It was small and completely closed off. The whole island is now a resort and has become popular with many celebrities. The gates to the village are the actualy hotel reception desk…swanky. Princess Di and Charles even honeymooned there for a while! We also stopped at an old Palace turned into a swank hotel. It too was all closed up just waiting for the summer season. David and I hiked around the area a bit and wished that we would have brought our swim suits!

Next we stopped in Kotor â a small village with a big wall. It wasnât like any other walled city I had seen yet. It was built by the water, into the hillside, and the wall extended us high into the rocky, steep hillside where there were no buildings. In fact, the wall kind of blended in with the rocks of the hillside like a chameleon so it was hard to even notice it there. But when you did notice it â you were in awe of itâs constructionâ¦similar to looking at the temples of Angkor Watâ¦it was an engineering miracle. Apparently they had to build the wall that high into the mountain as there was threat of attack over the backside of the mountain. I have no idea how anyone could have gotten to that pointâ¦but they must have been able to as no one in their right mind would carry rocks up there that high if they didnât have to!Â

We continued our way around the fjord and finally stopped for a late lunch. Mio had told us that he would take us to a wonderful place for seafood at an old Mill along the fjord with a natural spring. He told us that it was a little more expensive â but definitely the best seafood in the area. We pulled up to Catovic Mills to an adorable little setting with a natural spring, rowboats, the old original mill, and a stone house.

It felt as if I had just entered a nice restaurant in Napaâ¦.it was quite surprising. The Mill itself was originally built in 1670. We had Mio join us for lunch and we continued to chat the whole time about the area, life, love, and anything else that entered our minds. We had him pick out the whole meal for us as we trusted him completely at this point! They brought out a platter of fresh fish larger than I had ever seen! I thought David was going to screamâ¦not from his amazement at the fishâ¦but because he was squeamish seeing the fish with itâs head still on it! Mio picked out the top quality fillet of John Dory. I had no idea what John Dory was, until David tried to explain that they had a John Dory fish on Finding Nemo. Yeahâ¦and he says that heâs not similar to Jack from Will and Graceâ¦whatever. We had a dinner that could compete with some of the best meals I ever had in NYC in a beautiful setting â a perfect ending to a long day of new sites!

Overall it was an educational, chill-out day â just what the Dr. ordered. He dropped us off at 8PM and we ended up giving him the original price as we were both so satisfied with the day and his services. It was a great gut decision, no planning necessary.