The Amazing Tree-Climbing Goats of Morocco 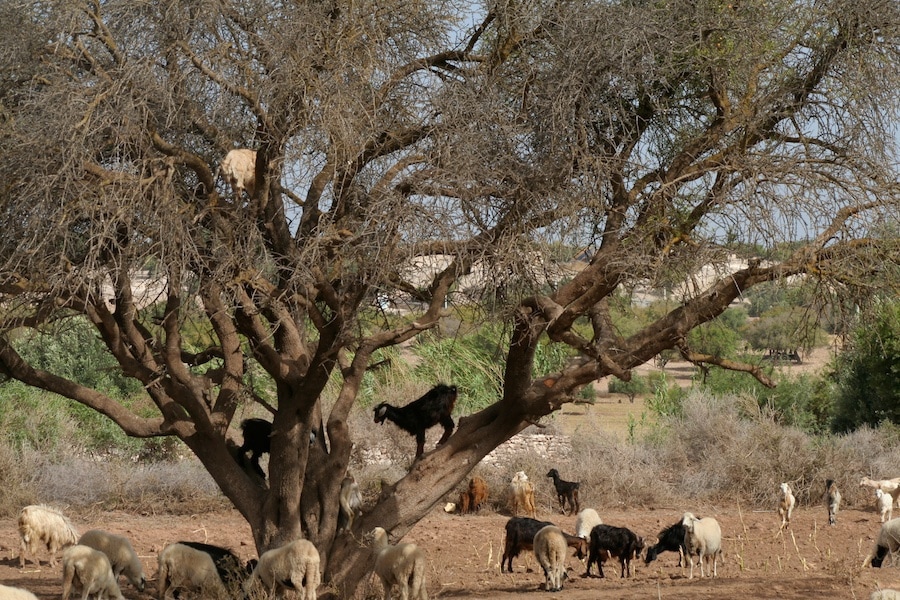 Since I really didnât have a book about Morocco, I was learning things as I was experiencing them, as well as learning about things through my other travel partners that had ample books on Morocco. After the first week, someone in my group mentioned in passing something about the Moroccan goats that climb trees.

Me: “What?, What did you just say?”
They: “In southern Morocco there are goats that climb trees to eat the fruit. Wouldnât that be cool to see?”

They proceeded to show me a picture in their travel book of about 14 goats hanging out high in the branches of a tree – and I was astonished that the rest of the people in my group werenât as utterly amazed about this as I was. They all kind of looked at me, surprised that I was this worked up about the topic.

Me: “What??? They canât just walk up, they donât have opposable thumbsâ¦how do they grip onto a branch?”

This was the beginning of my pilgrimage to see this âwonder of the animal kingdomâ. I couldnât get it out of my mindâ¦like the time I heard that the Russian Cat Circus was performing in Tribecaâ¦I HAD to go and see these crazy Russian housecats perform tricks! I was obsessed with the goats, my brain would sit and chew on it and I just couldnât come up with any feasible explanation on how they climbed the trees. Sure, mountain goats are definitely nimbleâ¦but climbing a mountain and climbing a tree seems totally different to meâ¦.I meanâ¦how do they get up the tree trunk to the first branches? I sort of rallied everyoneâs interest in the goats and they too started questioning the goats in trees. I talked about it all the time â and we all came up with a number of theories on how the goats got up in the trees.

How do goats climb trees?

I thought that they were maybe like reindeer, flew up in the trees somehow. Rob thought that maybe the goats just grew on the trees and when they matured enough, they just fell out of the tree and started walking on the groundâ¦kind of like a childbirth of sorts. Janelle thought that they took a running jump. Sara thought that they hopped up in the trees and from branch to branch. Someone also threw out the possibility of retractable, special hoofs that would enable them to grip the tree better, and then of course there was the Spiderman theoryâ¦sticky stuff on their hoofs. None of them seemed to make senseâ¦but we had no better explanations.

Apparently the goats climbed specific trees, Argan trees, mainly found in the southern part of Morocco. They are a thorny evergreen variety that grow in drought-ridden areasâ¦they are hearty. The Argan trees have fruits on them that the goats like to eat â actually, I think the goats are driven up into the trees in order to find food to graze on since it is so dry in these areas, the true definition of adaptation! People actually use these fruits to make oils that are very healthy and nutty tasting. Plus they make lotions, and other cosmetic products out of the argan oil. Many of the local women have formed a cooperative to manufacture the oil by handâ¦a painstaking but prosperous job for women in the country.

For some reason I kept on having the vision of a Monty Python movie in my headâ¦The Quest for the Holy Grail. It seemed like some little goofy cartoon that they would use in such a movieâ¦goats in the trees and then have them fall out and start walking around. Maybe I should talk to John Cleese about this.

The only problem with the goats in trees is that on our 21 day tour of Morocco, we werenât heading to the south where the goats supposedly hung out in trees. We seemed to go everywhere else in Morocco and experience every bit of cultureâ¦but the goats werenât on our itineraryâ¦damn. I really was hot on the idea of seeing these goats â it was my singular focus â I would pay large sums of dirham to someone that could take me to them! Karina did mention that the closest weâd be to that part of Morocco was when we were in Essaouria. She went on to say that she would ask around and see if there was any way that someone would take me to Agadir to see the goats. I was so excited at this prospectâ¦I had to see these amazing goats!

Searching out the elusive tree-climbing goats

When we arrived in Essaouria, Karina contacted one of the local guides that they use to see if she could get any info on the goats. In a matter-of-fact manner he said “Yes, you can see the goats â they are around this area too, about 25 km away” I was jumping for joy as if I were 5 years old and I had just woken up Christmas morning and saw my Barbie Dream House sitting under the tree! Since I had talked about the goats throughout our trip, I had peaked everyone elseâs interest tooâ¦and they also wanted to come see the amazing goats. I asked the guide if we were guaranteed to see goatsâ¦.and I got the answer, “Inshallah”â¦Arabic for âIf God wants itââ¦a popular saying among Moroccans â throw it at the end of any sentence and you will feel like a local.

Hmmm â the inshallah answer dashed some of my hopes â what if God wasnât on my side for this pilgrimageâ¦instead I may be wandering in the dessert for 40 days looking for goats with a taxi driver. However, I still felt like I should gamble and take the pilgrimage â Moses didâ¦so why shouldnât I?

We all agreed to hire a grand taxi to drive us out to the areas where you can spot the goats â we were to leave at 9:30. However, that night we had a call from the man that organized it telling us that a 9:30 departure would be too late as it will be too hot at that time and our odds of seeing goats in the trees would be decreasedâ¦.we should leave at 8:30 instead to increase our odds, inshallah. It did give me hope though as I was assured that the taxi driver knew what he was doing when pilgrimaging for goats. At least he was more educated than me!

I armed myself with all of my cameras and lenses that morning, and all 6 of us took off at 8:30 cramming into a little 4 door old Mercedes grand taxi. It was a painful, cramped ride, but I was willing to live through the fact that my right butt cheek had fell asleep and it was sweltering already at 8:30â¦it would all be worth it to see the miraculous goats. I felt like Dorothy heading off in search of Oz and the Wizardâ¦heckâ¦.she saw flying monkeys, that didnât seem so different from goats in trees if you ask me.

As we made it deeper into the country we turned down roads lined with Argan trees and we started to peel our eyesâ¦searching for goats. We saw donkeys standing by trees, we saw camels hanging out in bushes, and we saw goats on the groundâ¦but none in the trees. After about 15 minutes down one road, the driver turned around as he said it was too windy here for the goats to be in the trees. Once again I was impressed with the taxi driverâs knowledgeâ¦that certainly had to be a good sign, inshallah. Who knew that the goats were so finicky about the weather.

After another 15 minutes we saw plenty of goats, just none in the trees. I was starting to feel like I had lead everyone on a wild goose chaseâ¦we were sardines in the grand taxi, we were sweaty and hot, and none of had eaten breakfastâ¦and there were no goats. Just when I was giving up hopeâ¦we rounded a corner and saw a goat herder with a big group of goats, they were huddling around the bushes, and a big tree in the center of a field. I scanned the tree quickly and then I saw itâ¦a white furry shape in the tree, then a black furry shape in the tree, and then another, and anotherâ¦.goats in trees!!! It was a miracle! We all screamed in excitement and the taxi driver pulled over and quickly got out of our clown car to cross the road and get a closer look.

I was outfitted like the paparazzi, I had my telephoto lens and tried to get as close as I possibly could without scaring them out of the tree â I honestly werenât sure how jumpy they were (no pun intended). We stayed there watching the goats for about 20 minutes â I took about 60 pictures. We watched them climb up, climb down, jump from branch to branch, and loose their footingâ¦but none fell out of the tree. They were nimble! . It was easy to see how they got in the tree initially, a child could do it. They simply climbed up the trunk of the Argan tree which was normally low to the ground. However, to get at the fruit the young, agile ones would climb high up into the small branches as if it were a tightropeâ¦they were fearlessâ¦ and hungry I guess. Lord knows that I can understand what hunger will drive you to doâ¦just ask any of my close friends! They would actually leapâ¦getting their front or back legs airborneâ¦it was quite a sight. I tried to look closely with the telephoto lens at their hoofs, they didnât appear to have any special hoofs, and I certainly didnât see any thumbs! We stood there watching the goats as the goat herder and some other locals were watching us. They were probably about as amazed at seeing us there with our cameras as we were to see goats in trees.

The herder had to move the goats along so we thanked him (Iâm sure he was confused as to why) and we all crammed back into the grand taxi to head back to Essaouria. I was so excited about our find that I was giddy all day. My trip felt complete now, and it would be one of my highlights of the 21 days I spent in Morocco. My pilgrimage was a success â next, I may part the Red Sea!
Humdulilah! (Arabic meaning Praise God!)

6 Responses to "The Amazing Tree-Climbing Goats of Morocco"