I stared at Arenal shrouded in clouds; it looked the same as it did when I visited in 2003. However, the town around it – La Fortuna – had changed immensely. It was more established and ready to handle tourism. The restaurants all had English menus, and served cappuccinos. Humans and society change fast, while nature seems to change slowly.

I love revisiting countries I went to before I was a writer. I enjoy seeing how theyâve changed, and developed from a tourism perspective. Plus â I think when I travel as a writer I tend to take much more in and really experience the place in a different way than I did when I was escaping for my annual vacation.

Me hiking near Arenal

I first went to Costa Rica in 2003 with my girlfriend Angie; we traveled independently. I was a novice traveler, but Angie and I made our way through the country hiking, zip-lining (I question the safety of that now in 2003!), enjoying wildlife, drinking lots of cerveza, meeting boys, and working on our tans at the beach (likely with spf 10)! Travel was different back thenâ¦and apparently so was my metabolism and waistline.

âIâve never taken a small group tour; I normally travel independently.â Thatâs the normal reaction I get when I tell people Iâm going on a small group tour. Itâs as if all they hear is the word âgroupâ and they immediately get visions of coach buses and following a guide with a flag. I get it â it makes me cringe too. But donât overlook the word âsmallâ. Small groups are normally around 10 people; my Costa Rica tour only had 5 on it! There is no coach bus and flag-carrying tour guide herding you up. Instead, itâs actually a lot of fun! 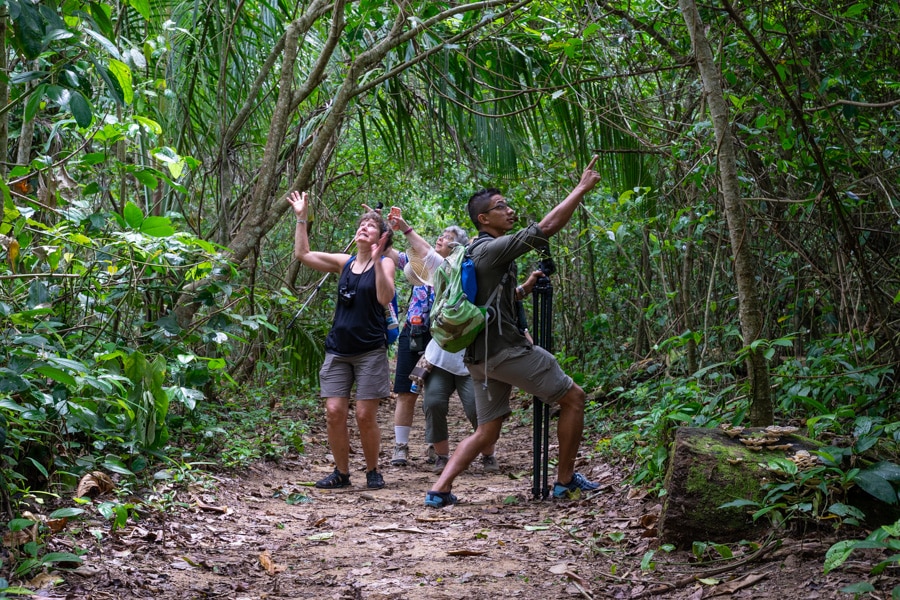 Our group spotting animals in the rainforest!

I understand the trepidation though â as I too like to travel independently and have done a great deal of travel that way. However, I have found small group tours to be just as fun and immersive as my independent travel. The key is that the small group trip still allows you time to be individual and make your own script. And the recent trip I took with Club Adventures was a good example of how small group tours can be an incredible way to see and be immersed in a country, while still remaining an individual.

This return trip would take me back to some of the same places, but this time there was more local interaction, local experiences, and of course more spf, less beer and boys.

Costa Rica is in a prime location; think of it as the little, narrow center of an hourglass â where the sand squeezes through and connects the two primary parts. That is Costa Ricaâs role to North and South America; the land bridge. When the land bridge formed it provided a way for all animals to pass from one area to the other. Because of that, itâs left with an incredible amount of biodiversity. It may only have 0.03% of the surface land in the world, but that small area packs a big punch.

My stops this time included La Fortuna (Arenal Volcano), Tortuguero National Park, and Puerto Viejo. This was a perfect diversity of locations; inland volcanoes for hiking and rugged adventure, canals and wildlife viewing, and a stop in a laid-back beach town.

Never too Old for Adventure

One thing that hasnât changed in the last 15 years is my love of being active when Iâm on vacation. This trip to Costa Rica was full of adventures in each region we went to.

How does it feel to hike on some of the newest land on the planet? Well – it doesn’t have that ‘new car smell’, but it was pretty cool knowing that the soil beneath our feet was the result of a 50-year transformation from lava rock to soil to forest. Arenal Volcano last erupted 50 years ago and lava flowed down the side forming the land that we hiked on!

With a Local Insider we took off on a beautiful hike up to a great viewing point of Arenal Volcano. When I first went to Costa Rica this was an active volcano that occasionally had lava seeping out of it; that was the big draw. However, the lava stopped in 2010, so now itâs the hiking and hot springs that draw people in!

Ziplining has come a long way since I went back in 2003! While at La Fortuna we did a ziplining tour that had us flying through the rain forest at great speeds! I think it’s so important to push yourself into things that scare you, and that’s exactly what I did while ziplining in Costa Rica. It seems that ziplining companies are now adding âextrasâ and somehow I got talked into an âextraâ on something called the Tarzan Swing. While in the zipline harness, you basically jump off a platform (short free-fall) and then swing super high in the tree like Tarzan! I’m scared of heights and was totally freaking out prior to being let go and falling off the platform! But I did it…and after the initial loss of my stomach, the screams turned to laughter!

We also got some beautiful time on the water kayaking at Tortuguero National Park. The Park is full of little canals that wind back into the forest where you can see birds, monkeys, caimen, and more. I loved all of the wildlife, but I think what I loved the most was maneuvering the kayaks back into the narrow canals where regular boats couldnât go. It felt as if you had entered a whole other world with vines hanging down and trees draping overhead.

Iâm pretty sure that the only locals I met back in 2003 were my guides or driver. Presently, one of my goals when I travel is to always get a feel for what itâs like to live in that country. This is mainly accomplished by meeting local people and doing more local experiences. Luckily, we had a lot of opportunities to do just that while in Costa Rica giving me a better understanding on the day-to-day life of locals. 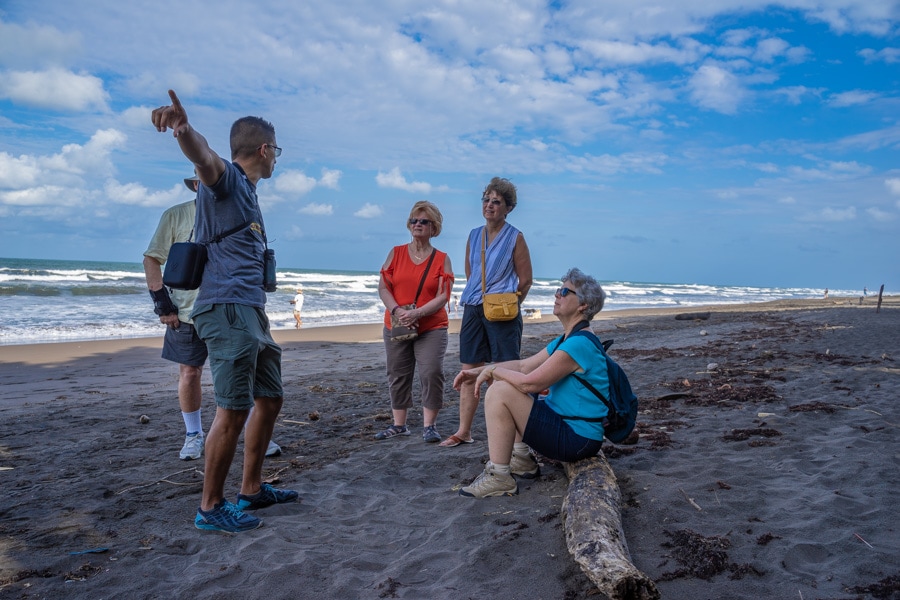 Our Local guide, Edgar, was phenomenal at bringing us deeper into his culture; and he was genuinely excited to share it! It started simply with a fruit stand stop where we were able to touch, feel, and taste all of the different exotic fruits in Costa Rica. This wasnât a part of the itinerary; it was a surprise stop. In addition, Edgar would take us to places he ate at and frequented in his home town of La Fortuna; he always chose places off the main tourist squares and heâd even go as far as inviting his friends to lunch with us so that we could meet more locals.

In addition, as we traveled from one location to the other, we had a number of on-the-road lunches that were unplanned. Edgar took a lot of pride in bringing us to places where locals eat showing us that the cuisine was much more than just rice and beans. My favorite stop was at a âsoda shopâ (very local outdoor cheap/fast cafes). There wasnât another tourist in site as we sat at the little bar seats in the outdoor setting. Part truck stop, part cafÃ© and juice bar â it was delicious!

While in Puerto Vieja we were invited into Veronicaâs kitchen and home to learn how to cook Caribbean flavors of Costa Rica. We met her whole family, learned how to make fresh coconut cream (starting with opening the coconut!), and we learned about rural life and organic farming. It was a lovely night of fresh, healthy food, and wonderful company!

The unplanned things that happen on a trip are always the most memorable to me. Itâs important that you find an itinerary where there is time to let those things develop and happen. If you are go, go, go with every activity and moment planned the vacation loses something if you ask me. One thing I immediately noticed from the Club Adventures itinerary is that they leave you free timeâ¦and plenty of it. You were able to let adventure happen!

We had free time to explore La Fortuna on our own and I chose to head into a local grocery store. Going to food markets is one of my favorite things to do to get a deeper glimpse into the local culture â and local snack food! As I walked down the aisles, I got a feel for different food, and what locals cook with. In addition, I learned about the price of items; something you canât tell from eating at a restaurant. It was there that I learned if you want to take coffee back with you as a gift then buy it in the grocery store. Itâs half the price of what they sell in tourist shops! In addition to coffee, I picked up a couple of great new chip styles I had never heard of before to try!

âCan we stop and look at the banana fields?â This was my favorite thing to ask as we drove through the Costa Rica landscape â âCan we stopâ¦â. Our itinerary had a lot of driving included in it as we made our way from location to location. But we had built in free time and a guide who loved to teach us about local culture, so Edgar always was excited to have us stop and get a closer look at things. I find this to be the ultimate in freedom when you are traveling, to be able to stop when you want to. We stopped and observed the banana packing plants, we checked out the cool living fences much closer, and we even stopped along the roadside to see a coffee field close up! This was a great way to get closer to the local culture and not just simply watch it from the window of a vehicle!

The âgroupâ in small group travel is always the âwild cardâ that you never really know how it will goâ¦but I hit the jackpot on this trip! We had a small group of 5 people; I was the youngest. I always find that when I travel with people older than me, I tend to learn more. Maybe they are just more inquisitive – Iâm not sure. But one thing that did surprise me about our little group of 5 was that everyone was up for trying new adventures. I was so proud of Nils and Linda for ziplining; they were in their late 70âs/80âs and they were up for trying anything! It was a reminder that you are only as old as you act. The group definitely was a big part of why I loved this trip so much â we were all young at heart.

Pura Vida were the first words Edgar taught us when we arrived. Itâs the backbone of the Costa Rican culture meaning good life, pure life, or simple life. Itâs used as an answer when someone asks how you are doing. Thanks to the people I traveled with, and our guide Edgar, my revisit of Costa Rica was pura vida!

In the past 15 years, Costa Rica had become more developed and travel savvy â and so had I.

How You Can Book This Trip

Club Adventures has done the research, sorted the logistics and made the connections. But, the narrative that unfolds is entirely yours to create.

I was a sponsored by Club Adventures on this trip, however all opinions expressed here are mine.

4 Responses to "Experiencing Costa Rica the Second Time Around"