Best Way to Travel New Zealand is Hopping On and Off 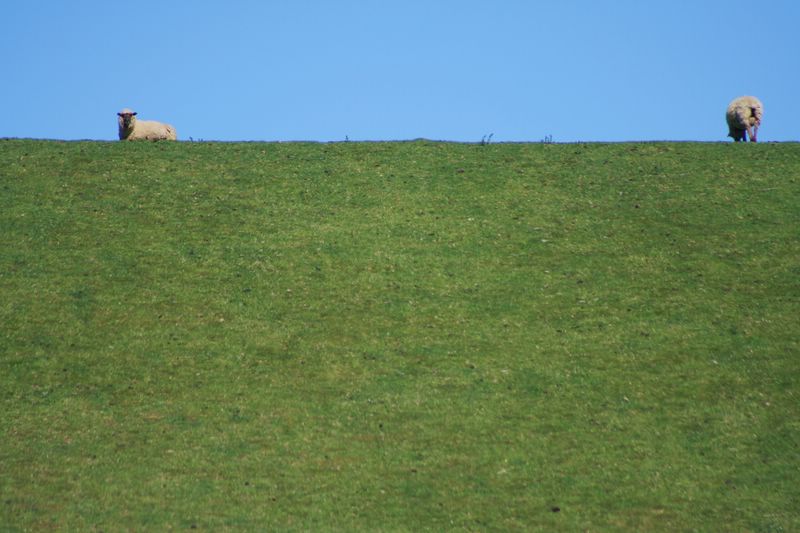 Note: Updated in 2017 – Magic BusÂ  no longer operates, however providers like Stray Bus and Kiwi Experience still do operation a hop on hop off option. Still a great option for solo travelers in New Zealand!

My last days in New Zealand and I feel as if I was looking through a kaleidoscope for 3 days. The colors were so powerful on the South Island – plus – the sun was out so we had bright blue skies…yeah!! I left a very cold Queenstown (it actually snowed there all day and was 1 degree C when I left) and hopped back on the Magic Bus to finish off my tour of the South Island.

It was weird to re-integrate myself back on the Magic Bus as all of my friends had moved on the past week -that is the downside of hop on/hop off buses I guess.Â  I found myself back in the business of making new friends again! With a new bus, came a new driver, Mark. Mark really left something behind…like a personality…but he had his weird quirks and generally got us to where we were going safely! He loved to use the term ‘wee little town’ and the word ‘keen’. It was cute for the first day – but after the 3rd day I was about ready to jump out of the moving bus if I heard the expressions again!

During this leg I met some new friends on the bus from Canada. A mother and daughter traveling together for a couple of months – Terri Ann and Lois – they were so cute and full of energy it was wonderful to see! The mother, Lois, even went sky diving…my idol! We spent time talking about all of the funny Magic drivers and playing cards – they really were fun to see and it made me miss my mom.

We headed to Dunedin – a cute little college town and home of Speights Beer. I decided to skip all of the touristy stuff that afternoon and instead treat myself to a movie in a theater as opposed to a plane movie.Â  I also stopped at the world’s steepest street.Â  Surprisingly San Francisco doesn’t own that title – it’s in Dunedin New Zealand! I have to admit, I was skeptical at first, but it was really steep! Pictures really don’t do it justice – but I tried.

As the bus left Dunedin, we stopped at the beach to see the Moeraki Boulders – they were these amazing limestone boulders that were shaped by the sea…much like the Pancake rocks of the West Coast. However – these were perfectly round!

Next we headed into sheep country again – the vistas were beautiful as ever. There were these fluffy clouds that looked as if an artist just painted them on a canvas. We then rode into a flat area where we had an amazing view of snow covered Mt. Cook – the tallest mountain in New Zealand. We stopped at a Lake Pukaki to take some pictures.

I think it was the most beautiful blue lake I had ever set eyes on.Â  The color of the water was such a perfect blue because it was glacier water. Once again – I felt as if someone had painted this view on a canvas, it didn’t even look real in the pictures! We were so lucky to see it on such a clear day!

We arrived in Lake Tekapo late afternoon and I hopped on a horse and rode around the lake for a a short time. Having never really spent much time on a horse – it was more like I gingerly got on an old horse named Jimmy and we slowly followed the other horses in front of us around a trail for an hour. It doesn’t sound quite as glamorous that way though! 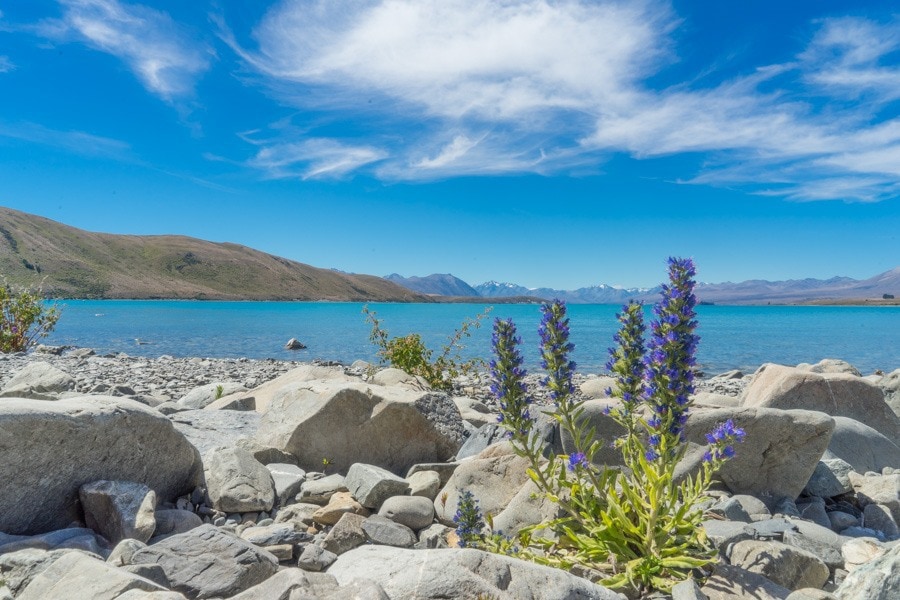 We were off for Christchurch the next morning. Christchurch was a great town full of art and architecture! I was only going to be there for 3 hrs before I had to catch a plane – but I had a great time taking pictures on the sunny day. I wish I would have had more time there – but I had to hop a plane that evening back to Auckland.

So – I’m back in Auckland now reflecting on my Magic Bus tour of New Zealand. My time was too short here – I needed about 2 more weeks. Even though it’s a small country – it has some much to offer. I toured both islands in a matter of 3 weeks and there were so many places I wanted to stay longer!

Overall – I can’t seem to find the right words for the hills, mountains, and the color that surrounded me. Some of the words that come to mind are Mighty, Presence, Pure, Vast, and Vibrant. The hills were so green – like a golf course fairway – but for acres and acres. The green against the blue sky, and the white clouds and sheep seems too perfect at times. Everywhere I went on the bus I thought that it couldn’t get more beautiful than where I am presently – but I was constantly overwhelmed by a new breathtaking landscape. It actually at times didn’t even feel real. In this world of digital artistry and retouching I felt as if someone created these views for me. I half expected to see the Dreamworks logo on the bottom corner of the mountain view!

Am I Really a Backpacker at 36?

This New Zealand adventure wasn’t just about beautiful views, it was about testing myself. I wanted to see if I could do the backpacking thing. I felt like I missed out on the ‘backpacking life’ in my 20’s – so I wanted to try to experience it in my 30’s. I will admit – at first it was a bit challenging. I was really not comfortable with sleeping with strangers (no laughing), sharing showers, and trying to live on the cheap – it was so different than my regular life that I have come to love!

However – I adapted – I grew to embrace my budget lifestyle again. I got used to sleeping on the top bunk and not falling out. I even enjoyed eating PB&J every day until I got through a whole loaf of bread! I proved to myself that when I needed to – I could be thrifty again. I never did get used to coming home from the bar to a dorm room full of people sleeping, trying to be quiet – and use my flashlight to find my way around in a drunken stumble! I missed my past life of simply getting a cab home, having my cat greet me at my apartment door, turning on the TV, grabbing a bowl of cereal, and sitting on the couch in my pj’s trying to sober up before I went to bed! Having to be considerate of others in a drunken state was not my forte!

But hands down traveling by hop on hop off bus was the best way to travel solo through New Zealand!Â  I made so many friends and was never alone!

This trip wasn’t about immersing myself in the local culture – in fact – I met very few local except for the guides. If you want a trip that immerses you in the local culture – try this. However I did learn some of the local sayings – my favorite was ‘Sweet As’ – used to express something that was ‘cool’ or ‘awesome’. For the first few days here I thought they were saying ‘Sweet Ass’…but alas…they weren’t complimenting my bum…they were just saying ‘cool’.

I feel like my creative side has been allowed to come out. The good news is that I feel like I have a creative side again! I feel like I’m looking at the world through new eyes…the color is so intense – and the thoughts are so intense. I constantly carry a little note pad around with me and write down thoughts just so I don’t forget them. I don’t really know what I’m going to do with all of this new vision…but I hope to God I do something with it. I know I will do something with it!

I guess I am a backpacker at 36!Â  And the best part is that I felt like I really SAW New Zealand – my wayÂ  – but never alone – by hop on hop off bus. Sweet-As!!