Traveling When the World Hates Your President

In this current era of President Trump, we seem to forget that back in 2007  no one liked our US President, George W. Bush,  either.  I recall the hardships and learnings of what it was like to travel when the world hates your president, like this trip I did to Rome in 2007.

Nine months out of the country. Nine months of not having to deal directly with American politics. Nine months of questions from foreigners about the war, our president, the next campaign, Hilary, and the ever popular topic of how wonderful Bill Clinton was. I have been rather astonished traveling to different, remote countries and how they still seem to love Bill Clinton everywhere, and they are continually baffled by George Bush.

Since Iâve been out of the country, I have to admit â Iâve taken more of an interest in American politics and certainly world politics. I now buy Newsweek and get rather excited about reading itâ¦as if it were In Style or Lucky magazine (my old favorites!). I also like to read the local papers and see what they decide to print about Americaâ¦which stories they choose to share with their population and I consider the picture that it paints about America in general. Itâs all a fun pastime for me, until June 9thâ¦the day that President Bush came to Rome. I must admit â I was pretty pissed at first. I had been pretty proud of myself for escaping American politics in general and enjoying it on my terms as opposed to being bombarded every day by it in the States. 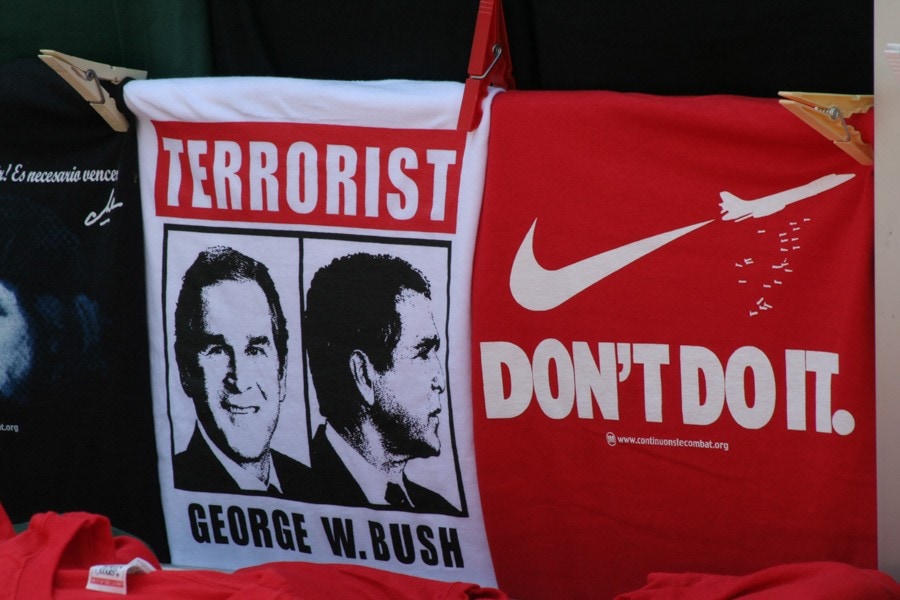 When Italians talk to me about George Bush, they always refer to him as âBooshâ. No George, no President, no W, just Boosh. When they say itâ¦it comes out like Boosh..and sounds like any other Italian word. In fact â there have been many times that I have asked â Boosh?…what does that word mean? They look at me and say Boosh againâ¦louder as if I didnât hear themâ¦Iâm still puzzledâ¦thinking that maybe itâs some kind of pasta or somethingâ¦then they finally say George Booshâ¦.ahhhhâ¦.the lightbulb comes on and I finally understand that they are actually speaking English to me â and Iâm just so dim that I didnât understand it! Or maybe subconsciously I had tried to forget him!

The first I heard of President Bushâs trip to Rome was from my friend Micah. Micah is a wonderful friend of mine from San Francisco. We met through running and have remained friends ever since. He was a very close friend in San Francisco, and like most of my male friendsâ¦heâs gay. We would always joke about being each otherâs âfall back planâ for marriage. If I wasnât married by 40, we would simply marry and throw a fabulous wedding partyâ¦well, that was the plan at least. However Iâm now 37 and I think heâs getting worried! Sure âit was a great idea when I was 33, but now at 37â¦I donât think heâs as excited about it.

We had planned to meet up for a vacation in Rome and Siena. On pure luck he happened to choose the week to join me in Italy that Rome was celebrating Gay Pride.

A Presidential Visit in Rome 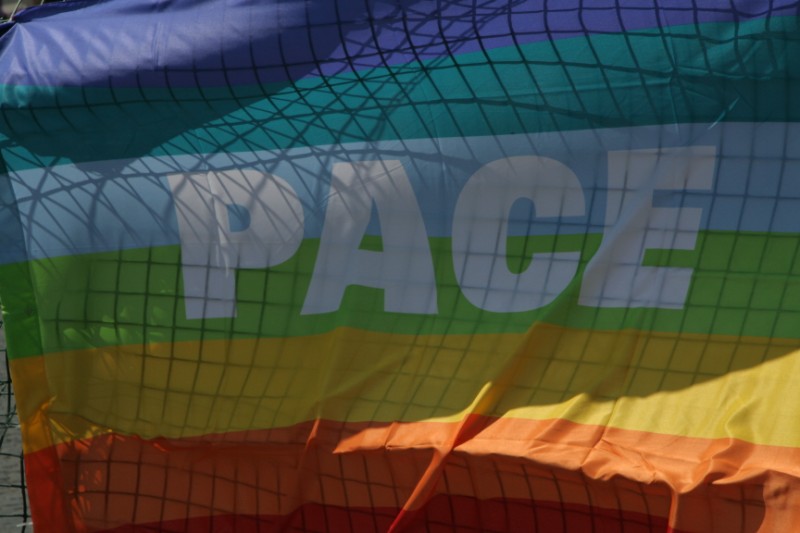 Flag for Peace (Pace in Italian) displayed at the protests

However, last month Micah e-mailed me to let me know that Gay Pride in Rome had been moved back due to George Bushâs planned visit for that same weekend. Apparently the officials of Rome were worried that there would be too many demonstrations in Rome if Bush and the Gays were in Rome at the same timeâ¦sad but true. They didnât have enough police force to go around. So, they moved Gay Pride celebrations back one week and Boosh took precedence.

On June 9th, Micah and I awoke to the sound of helicopters hovering everywhere. Bush had arrived in Rome to meet with the Pope, and the Prime Minister of Italy as a quick stop on his was from the G8 summit. Iâm really not sure why else he was hereâ¦maybe he was hungry for some good pasta. The whole country was buzzing about it â not necessarily in a good way. As New Yorkers know, when Boosh travels, the whole perimeter shuts down creating gridlockâ¦and the Romans were not happy about that. The Polizia were dispatched in the thousands, ready for skirmishes. Micah and I walked around Rome admiring the good looking policemen, trying to steer clear of the Vatican. We came across a poster about a Anti-Bush demonstration in the Piaza de Popolo at 3PM. I was intriguedâ¦very intrigued. I like the idea of seeing an anti-Bush demonstration in another country â I wanted to see what it was all about. In addition, Micah had never seen the Piaza de Popolo, so we could also do site-seeing at the same timeâ¦perfecto!

The World Hates Our President 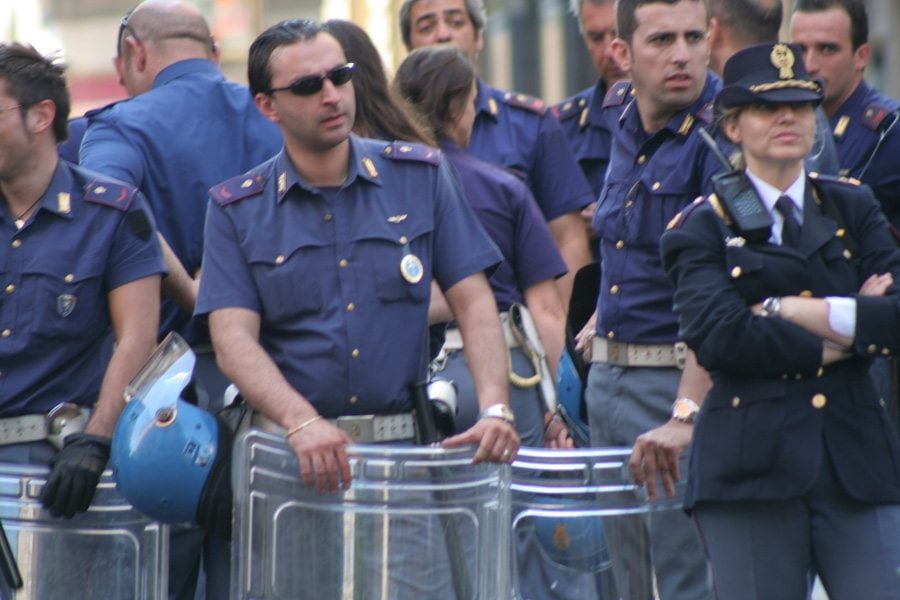 When we arrived at the Piazza there were Peace (Pace in Italian) flags everywhere, and television reporters. The reporters were perched high on scaffolding to be above the crowd with a birdâs eye view. We walked around and looked at the different booths, and took it all in. There were posters, t-shirts, bands, and banners. It was attended by anti-war protesters, and the Refoundation Communist Party, the Italian Communist Party and the Green Party. There were also a number of Palestine posters â so they were in the mix too. It was all rather peaceful and harmless âbut interesting to see.

As we continued to walk around the city that day there were still a sea of police officers keeping peace, ready for a riot. I did read in the paper the next day that there was a small riot and tear gas used at one point during the demonstration. It always amazes me how much the rest of the world cares about what America is doing, and most importantly what Bush is doingâ¦and it scares me a bit too. They know much more about American politics than I do, heck â I donât even know who the Prime Minister of Italy isâ¦thatâs terribleâ¦Iâve been here 2 months. I have to admit though, in every place in Italy that I visited I never met one Italian that was a fan of President Bush. This didnât come as any huge surprise to me as the rest of the world has been like that too I suppose.

I survived the Presidential visit, but I was upset; upset he brought this piece of American politics here to Rome, and to my traveling.  It’s not a great feeling to travel the world hates your president.  I was hoping to escape this during my travels.  However, I suppose it was inevitable that Bush and I would end up in the same place sooner or later in the world. The only good part was that it brought a bunch of great looking Poliza out on the streets! Micah and I enjoyed our sight seeing all day!