Roughing it in the Outback 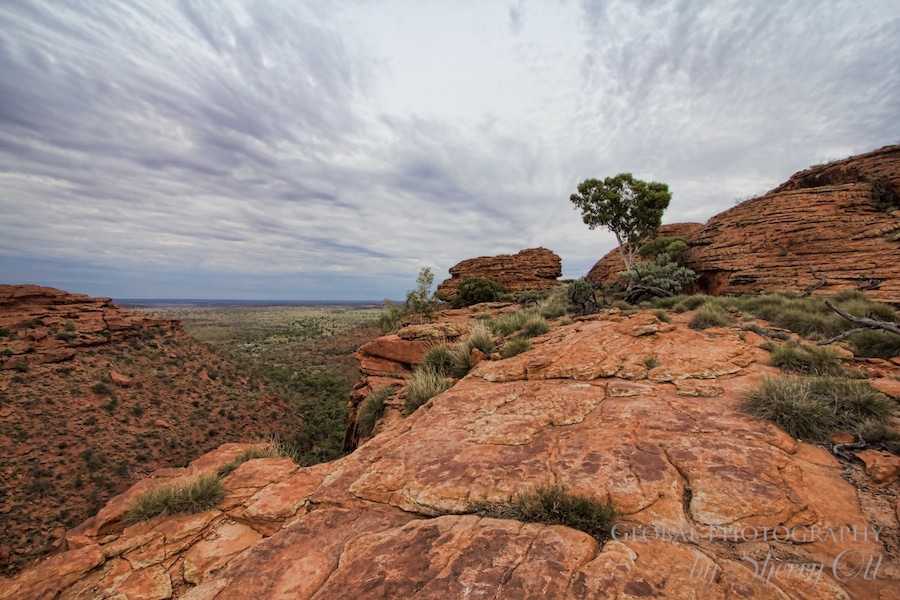 I heard the howling as soon as I lay down to go to sleep. Dingoes. The sound came from my left; it felt as if it was far away. I hoped it was far away. I dozed off for a few hours, however it felt like minutes when I woke up again to more howling. I could also hear a slow whistling hum. I lay there with my mind churning on the whistling sound. What was it? Then I realized it was the wind blowing through the tough, scrubby brush trees in the outback. I wanted an Australian Outback experience, and now I was getting it – complete with a pack of howling dingoes. Howling again. The pack was closer, but I felt safe and secure in my tent. My brain, satisfied with identifying the unknown noises, was now free to go back to sleep. I fluffed my pillow, pulled my duvet cover up to my chin and settled back into a fetal position in my big fluffy bed.

No internet, no cell or mifi signal â this camping is the real thing. Never mind that inside the tent is a queen size bed, electricity, and separate tented bathroom with shower and hairdryer. Ok â itâs just about the real thing. Itâs my kind of camping. This glamping experience was a bit ârougherâ than the others I experienced in Australia but there is a reason itâs called glampingâ¦it still was glamorous. The tent was completely canvas and built on a decked platform. It was simple compared to some of the high-end glamping I had done recently. It had 5 zip up windows, a separate tent bathroom, and even a little back âdoorâ and patio to sit and look out on the scrubby bushes of the red outback. 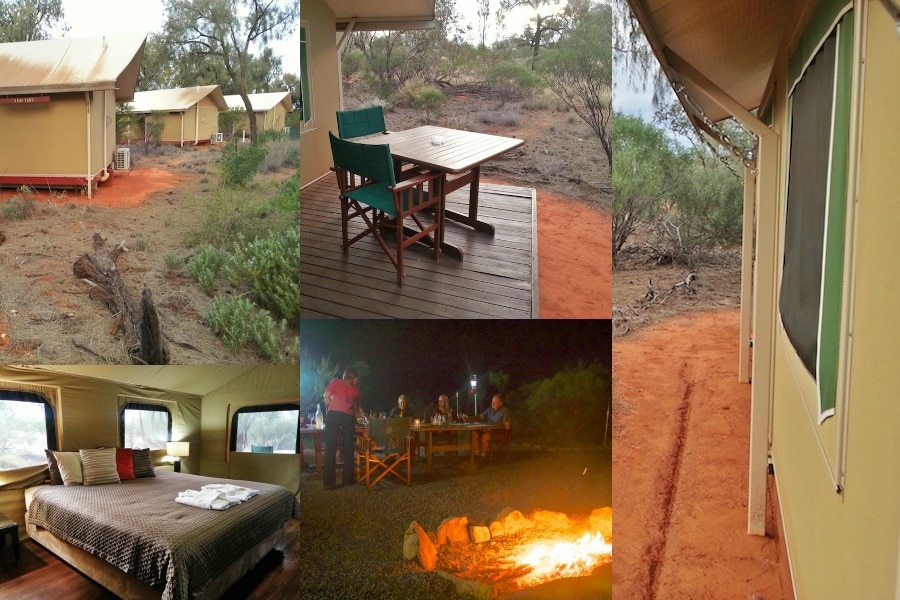 When I arrived in Kings Creek station via bus, Lily from Kings Canyon Wilderness Lodge was there to pick a few of us up. She was petite and in her 40âs with a sly smile. She drove an old dirty SUV, perfect for this desert environment. The Australian desert was not at all what I was expecting. I had expected this red wasteland – flat, red, and barren. But instead I was surprised with green plant life all around. Short, bushy, vibrant trees filled the landscape and seemed to glow against the red landscape. There was plenty of red sand and even sand dunes â but with the green trees and plants they looked like rolling hills instead of sand dunes. I was told things were greener than normal due to a very wet summer. I had arrived in the fall in the Northern Territory of Australia and I quickly determined that itâs the best time to be there â the temps were pleasant, and the flies werenât as bad as the summer (I was told).

The outback doesnât really have towns – they have stations. The stations (what we could call ranches) were the only things really on this land. Kings Creek Station was a camel farm and tourist bus stop. Most of the stations herd cattle and they are normally about 1,000,000 acres and can have upwards of 8,000 to 15,000 head of cattle on them. The areas are so vast that they herd them with helicopters (sounds fun huh?). Kings Creek Station was the only semblance of civilization I saw since leaving on the bus 4 hours earlier from Uluru.Â  The station was as simple as they come – a little cafÃ©, tourist shop, camels, and a place to hire helicopters and ATVâs.

Lily didnât have us waste too much time at the station and instead whisked us away in the SUV to Kings Canyon Wilderness Lodge. After settling into our tent accommodations I joined others for a communal dinner under the stars. Lily had transformed into a little black dress and was serving us drinks and canapÃ©s of smoked kangaroo, cheese, and avocado around the campfire to get things started. The juxtaposition of upscale dining with the smell of a campfire was a bit surreal, but the dinner and company was great.

Lily was our entertainment, putting logs on the fire and serving food and stories up in an equal amount in her black dress. The people who live in these remote communities fascinate me. She said that she hoards newspaper and magazines and reads them on special occasions. They get one mail delivery a week and one truck comes through a week which means that word from the outside world is minimal. This made me wish I hadnât thrown away my newspapers before leaving Uluru. I have a hard time understanding how people can work here; Kings Creek Station and surrounds is a whole new level of remote. I donât think I could last more than a few weeks, yet the environment seems to fit Lily perfectly.

Despite my restless dingo filled night, I had to wake up early the next day for the real reason I came here to Kings Creek Station; the Kings Canyon Rim hike. Graham was our tour guide and drove us to Watarrka National Park where we began the 6km rim hike. The hike winds around the top of the canyon providing you vertigo type views over the sheer sandstone cliffs and into the valley 150 m below. The only taxing part of the hike was the initial 10 to 15 minute uphill climb/slog, but it weeds out the unfit people from the trail! Once you get to the top you have 3 more hours of walking and enjoying the lovely views. We had cloud cover else I was told that it can get quite hot â so itâs a good idea to go in the morning.

One of the most stunning parts of the hike was the Garden of Eden, a little valley in the canyon where water pooled and there was an abundance of green plant life. Steep wooden stairs were built along this part of the trail to get you down and back up from the Garden of Eden. It was a lovely spot to stop and enjoy a snack and thankfully there were no snakes or apples. Graham pointed out various plant life and trees during the hike – some of which was over 600 years old. I sort of fell in love with all of the old gnarly trees â itâs a weak spot for my camera and me! He also shared stories about the aboriginal culture from this area, which was quite different from the tribes around Uluru. However, overall the morning was more about hiking and less about culture. 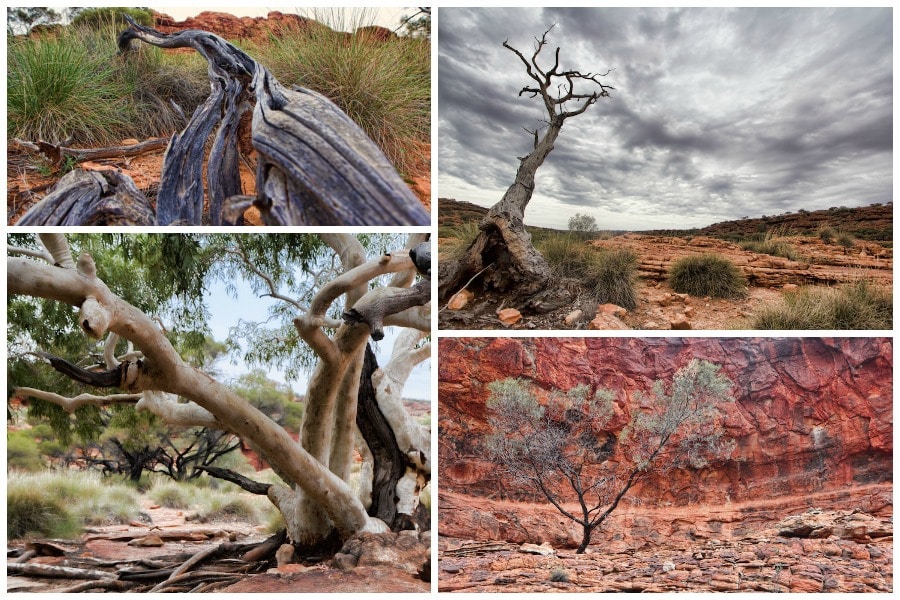 Trees in the Outback Kings Canyon

I only stayed one night/day in the area, but I was able to get a small feel for the outback and the life around the remote stations. Graham deposited me back at the station to pick up the bus to Alice Springs. I took the opportunity to try the camel burger that Lily recommended at the station cafÃ©. Camel meat is a staple out in these parts â so I figured what the heck. It tasted like a burger, however the only odd thing about this burger was the Aussie toppings. Get the true Aussie experience and order the deluxe and youâll find a lettuce, tomato, cheese, onions, fried egg, AND a pineapple slice on your burger. After lunch I looked around the small, dusty station at the helicopter and camels and soon our bus pulled up in a cloud of dust. My short time in the outback was done, but it left me wanting more. As much as I loved the glamping at the wilderness lodge, the next time I go back to the Northern Territory, Iâd love to really immerse myself in the station life without the tourism and learn more about their day to day lives and work. And yes, I want to herd cattle in a helicopter! Iâm fascinated with the remoteness and lifestyle of the outback of Australia, minus the packs of dingoes. 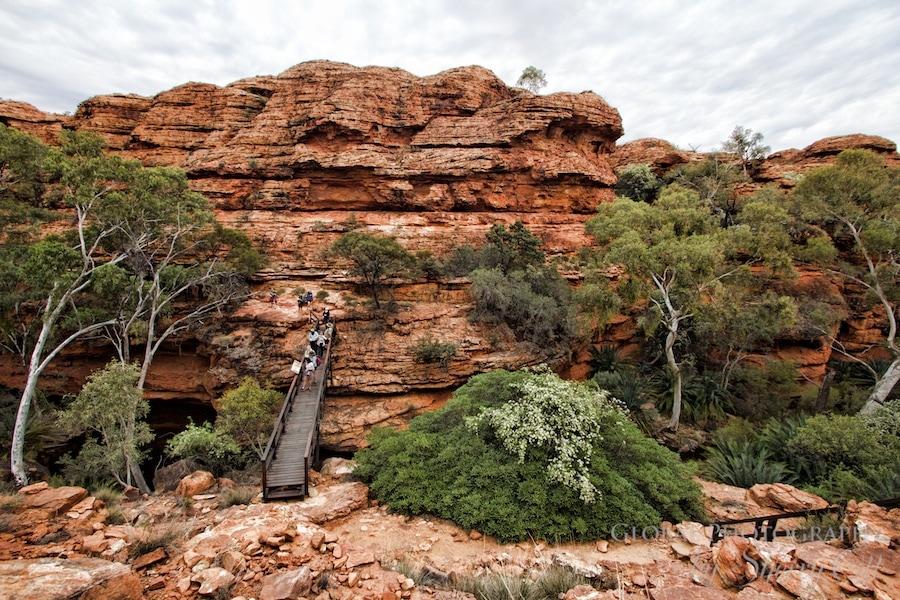 Hiking the Rim and crossing over into the Garden of Eden 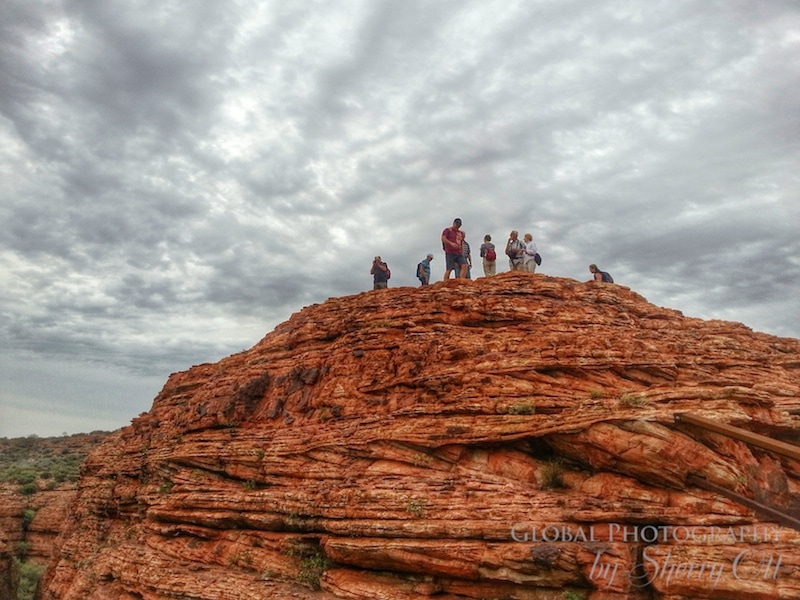 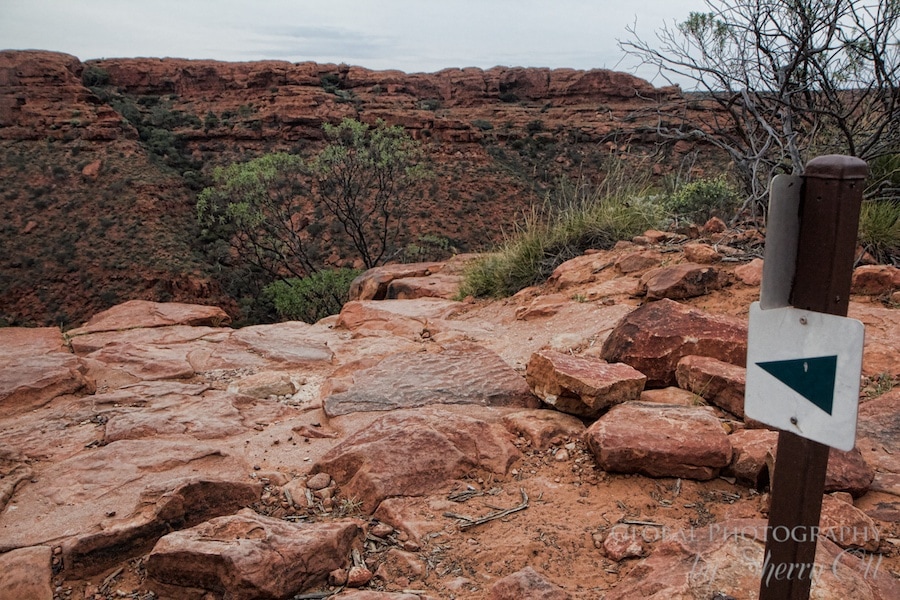 Don’t go too close to the edge! 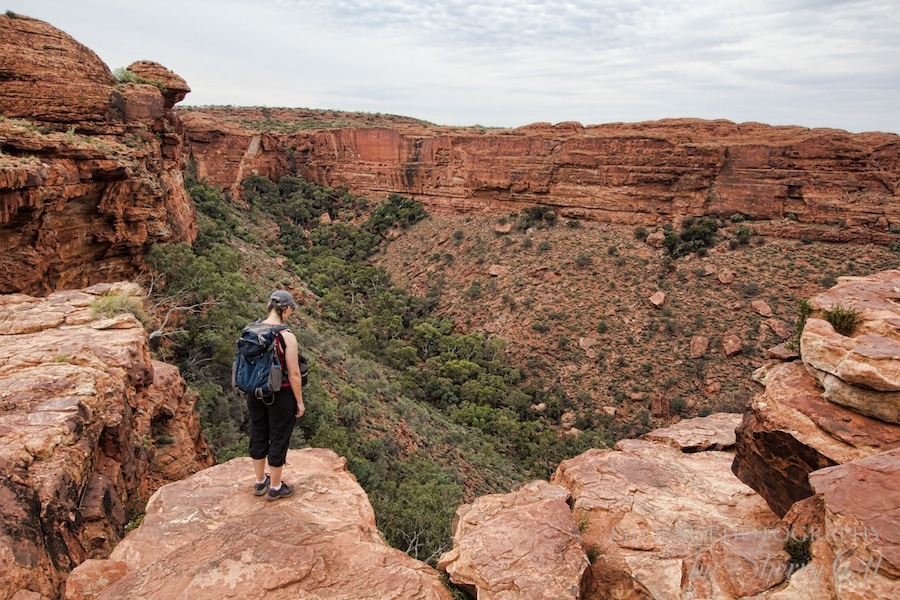 I peer over the ledge to the canyon floor 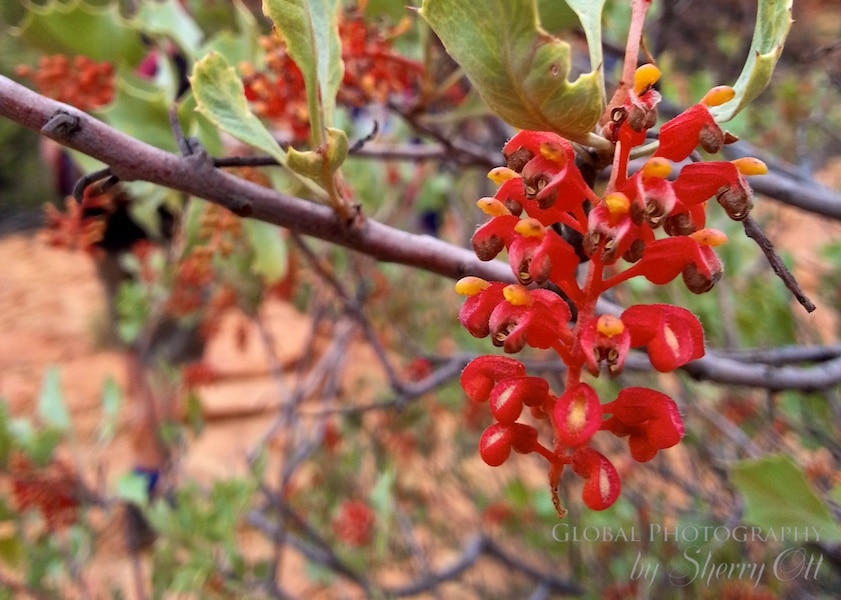 Some rugged plants survive in the harsh Outback environment 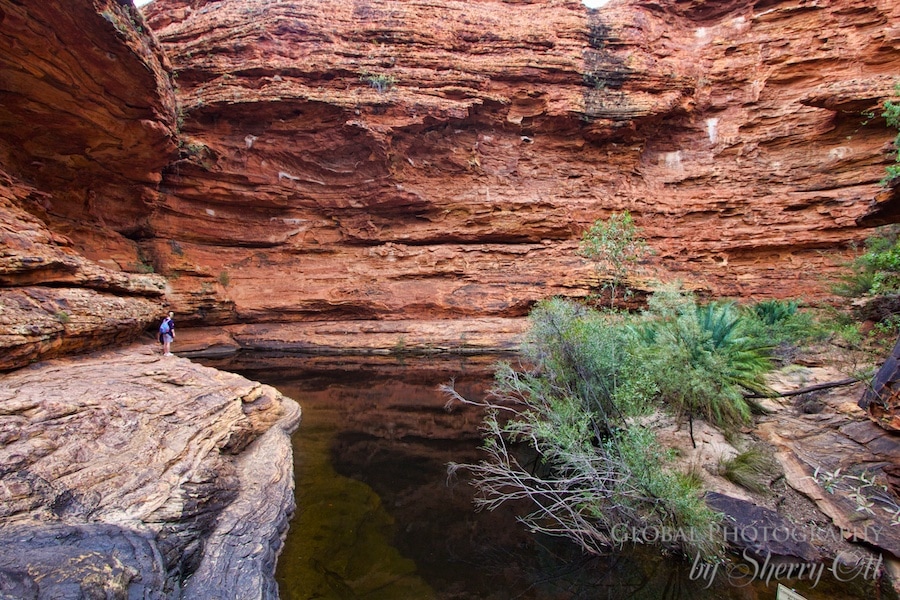 The water hole at the Garden of Eden 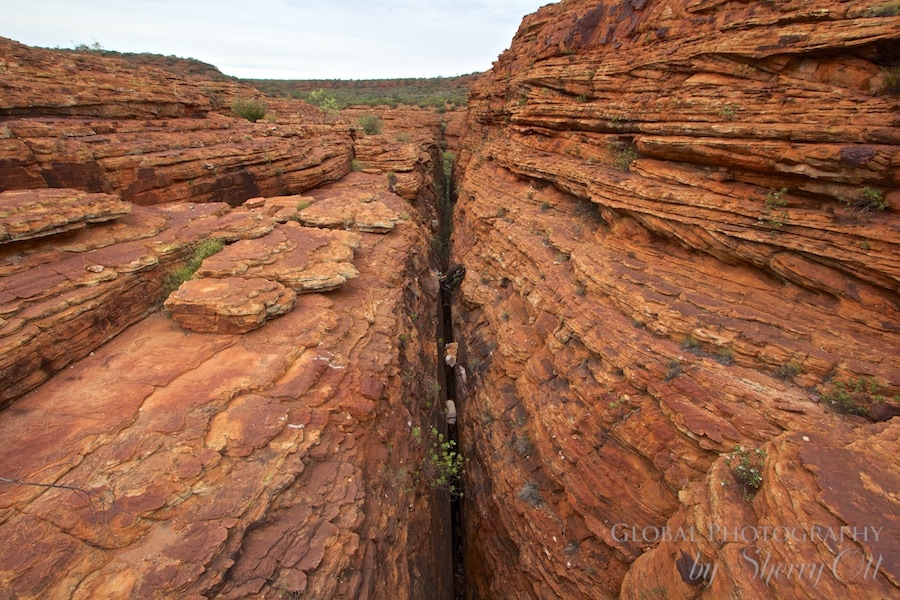 It all started with one small crack…and millions of years later you have a canyon! 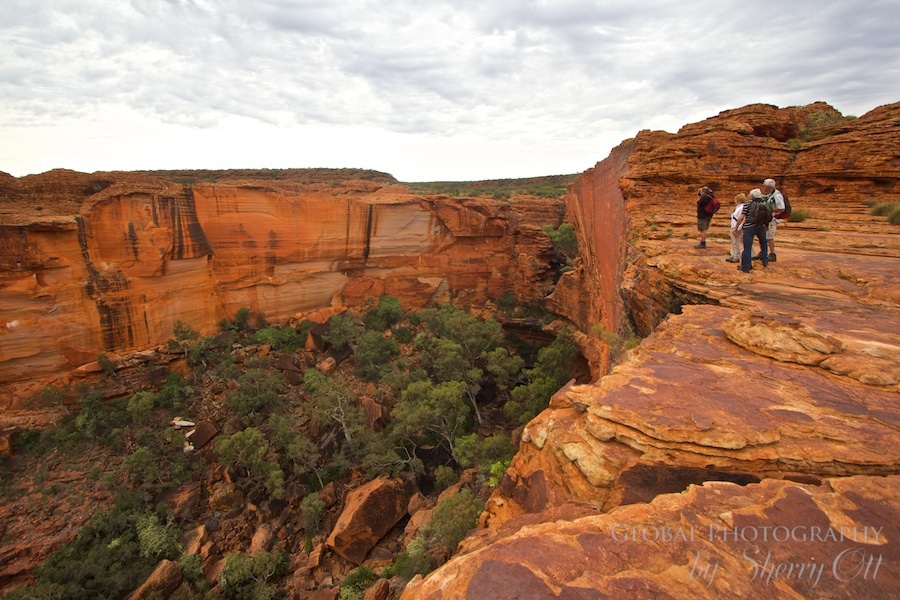 Peering over the Garden of Eden

Disclosure:Â  I was a guest of the Tourism NTÂ during my time in the Northern Territory of Australia.Â  However all the opinions expressed her are solely my own!

7 Responses to "Roughing it in the Outback"