Tartan Power at the Highland Games in New Brunswick 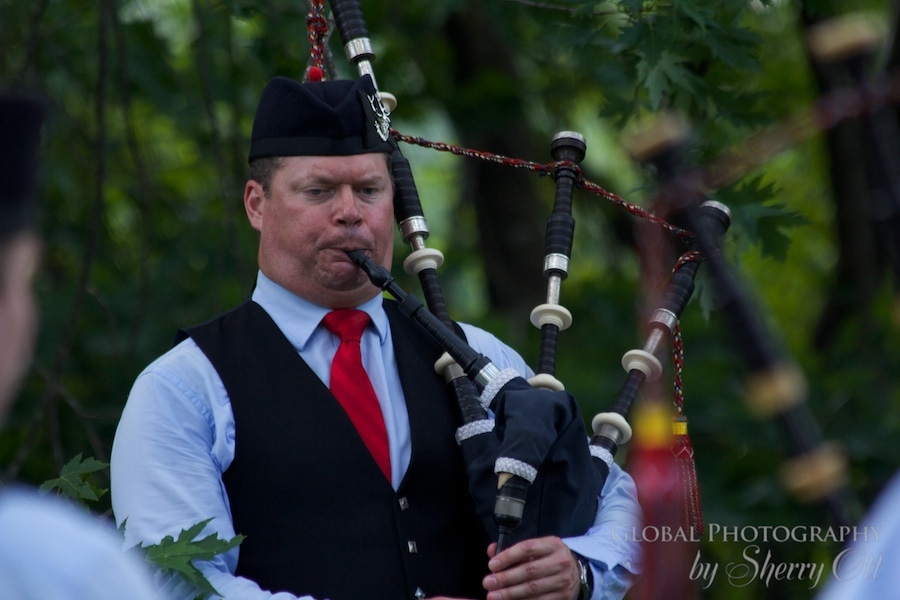 Bagpipe competitions at the Highland Games

âWhiskey makes the bagpipes sound better, â said Frank our whiskey tasting MC for the day. I laughed, but I actually like the sounds of bagpipes, however I had never heard them played for this long of period before. You could hear them echoing through the park all day as the music competitions seemed to be never ending.

Festivals are a great way to understand the culture of a country or area. When I arrived in Fredericton with my parents for our New Brunswick holiday, I was excited to find out that one of New Brunswickâs big festivals was being held â New Brunswick Highland Games. The Highland Games Festival is made up of two equally important halves – the Highland Games (piping and drumming, highland dancing and traditional athletics) and the Scottish Festival (entertainment, clans and workshops) . The event draws 7000 visitors and hundreds of competitors/performers from across Atlantic, Canada, Ontario and the Eastern seaboard.

Be a Scot for a Weekend at the Highland Games

Not only was there constant music around the festival grounds, but I was surrounded by tartan plaids, men wearing kilts and socks with tassels, and haggis was being advertised at the food tents. I had been transported to Scotland, yet I hadnât left North America. After all, my mother hates long plane rides â so this was a way she could visit âtwo countriesâ in one short plane ride! 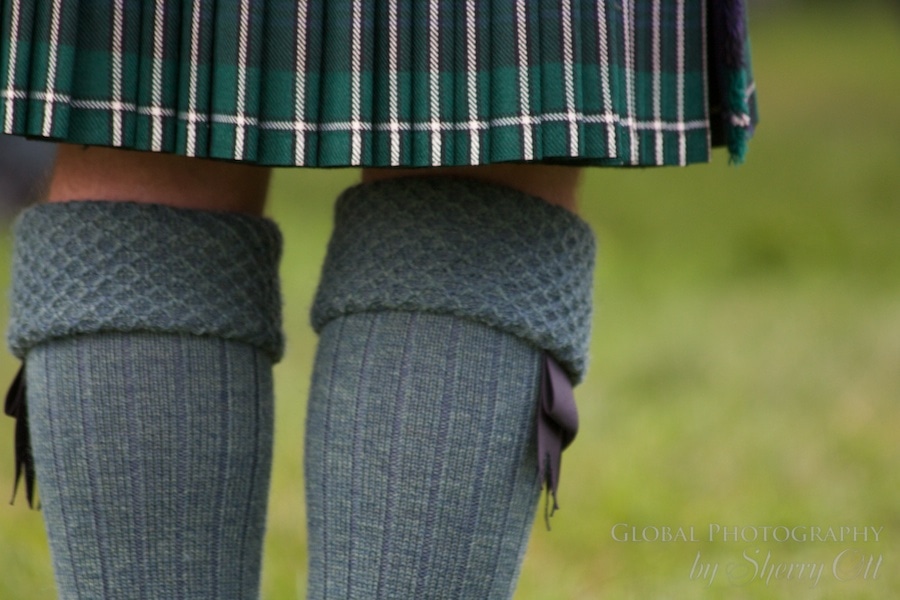 Get out your tartans for the New Brunswick Highland Games

Drum teams practicing in the park

The festival was full of competitions to view – so many we couldnât even see them all. We did take time to watch the drum and pipe teams compete, there were individual and team competitions. In addition to the competitions, you could order your family tartan there, do whiskey tasting, and have haggis for lunch â seriously it was little Scotland in New Brunswick. I had even been to Scotland before and this felt more Scottish! I was just missing the fried Mars bars.

My parents and I meandered around the grounds taking in the different competitions, however there was one competition we were all quite excited to see â the women’s heavy events competition. Ever feel so mad at times that you could throw a tree? Well â you can do that at the Highland Games.

Women had always competed in the Highland Games, but originally as dancers or musicians. The womenâs Highland Games heavy events were a fairly recent addition 5 years ago. Apparently it was never really a question of âallowingâ the women to compete, it was an issue of trying to find enough women who wanted to compete.

The ancient Heavy Events date back early in Scottish history originating during the reign of King Malcolm Canmore in the 12th Century. The Heavyweight Athletes compete in traditional events over two days. At the end of the second day, the points are totaled, the winner being the one with the most points. 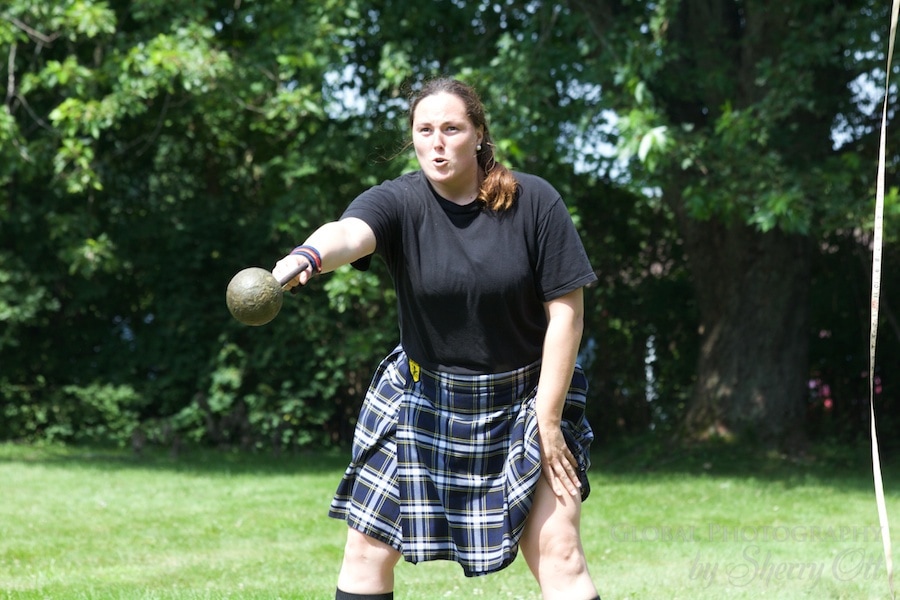 The Womenâs Highland Games Heavy Events include all of the same events as the men but slightly lighter:

Stone Toss:Â  Like a shotput but a 8 -10 lb stone is used
Heavy Weight for Distance:Â  A 28 pound lead ball on a chain is thrown with one hand for distance.
Light and Heavy Hammer: Â  A ball is mounted on a 50 inch rattan handle and the athlete must throw it as far as they can without moving their feet.
Weight for Height: Throw the heavy weight over a bar as high as you can.
Caber: Â  Turn a log (15 ft. and 48 lbs) end over end.

And itâs not just about throwing or tossing heavy things willy-nilly â thereâs definitely technique to each competition. In order to get women to sign up, the association offers a training workshop for women before the festival. The workshop is hands on and is taught by a former heavy events world champion. Most of them come from an athletic background already so itâs just a matter of learning new techniques.

Mom, dad, and I took a seat in the lawn area in front of the competition and were amazed at just how much strength some of these women had. And surprisingly many of them this was their first ever Heavy Woman competition. As we watched them compete in the various throws, my mother chimes in that she used to throw shoes as a competition at their family reunions on the farm. Then Dad had to one-up her and said they threw fence posts at their family reunions. Apparently throwing things is a popular form of entertainment in Nebraska and Scotland. 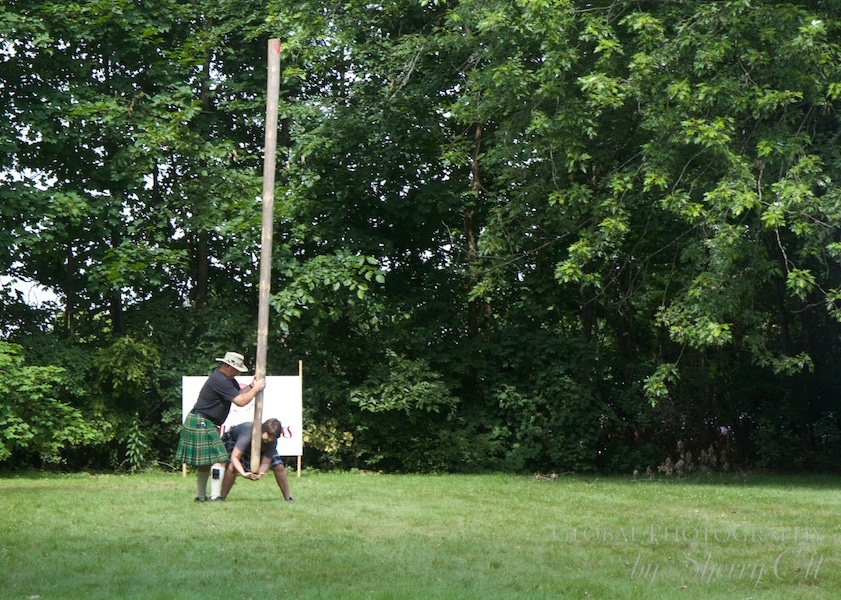 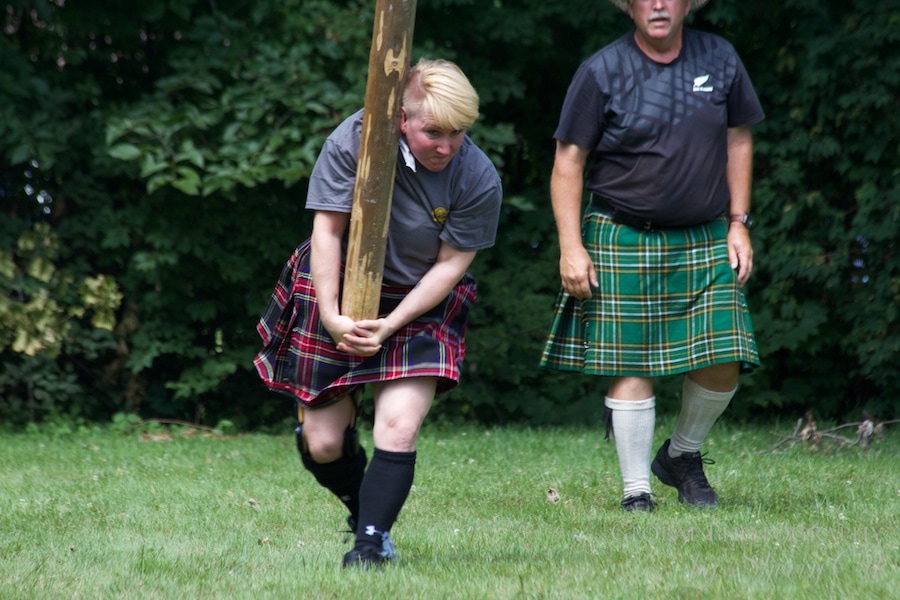 The height and weight of the caber makes it hard to control.

Of course they had these events for men too â but I found myself fascinated with the womenâs competition – It was fun to watch and of course a little part of me wondered how far I could throw the heavy objects. After all, I throw my 40 lb backpack around all the time â there has to be some similarities! The Highland Festival was a great way to get to know Fredericton and a way to travel to two countries in one.

Disclosure:Â  I was invited to enjoy New Brunswick by Tourism New Brunswick.Â  However all the opinions expressed her are solely my own!