Visit the Best Chocolate Houses in Paris on this Tasty Tour 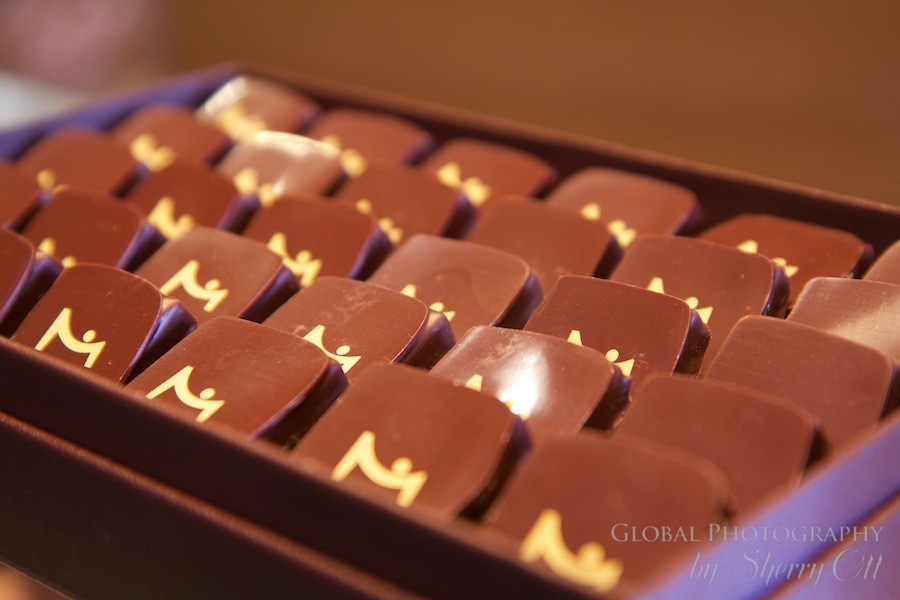 Paris Chocolate – you can’t have just one.

Youâve heard of all of the famous fashion houses in Paris – Chanel, Pierre Cardin, Dior, Givenchy, Jean Paul Gaultier, HermÃ¨s, Vuitton, Yves Saint Laurent to name a few. But have you heard of the great chocolate houses in Paris? My love for fashion may be about equal to my love of chocolate â but chocolate tastes better.

So I set out with our Viator Tour guide and chocolate expert, Caroline (who – fun fact – used to work in the fashion industry), to get to know the Paris chocolate shops and taste the best chocolate in Paris. Iâm pretty sure that after this Paris chocolate tour which visits 9 chocolate houses in neighborhood of Saint Germain des Pres, I no longer fit into my fashions.

This Paris chocolate tour was a chance to not only meet some of the chocolate makers, but also taste the best chocolate in Paris. Be prepared to be on chocolate overload after this half day tour through Saint Germain des Pres!

Itâs new and sleek â established in 2010. They were very innovative in their products and design giving classical pastries and chocolates a modern twist. They focus on 2 or 3 flavors each season and only feature these. It was grapefruit and citrus when I visited in the fall. We tried the covered chocolates filled with ganache (chocolate and cream mixture). The molded chocolate concoctions were nearly too cute to eatâ¦nearly. They make the molds first and then inject with the creamy liquid filling â meant to be eaten in one bite. Each piece has a different flavors of filling. This was certainly a high end place â and had a slightly uncomfortable atmosphere due to it. 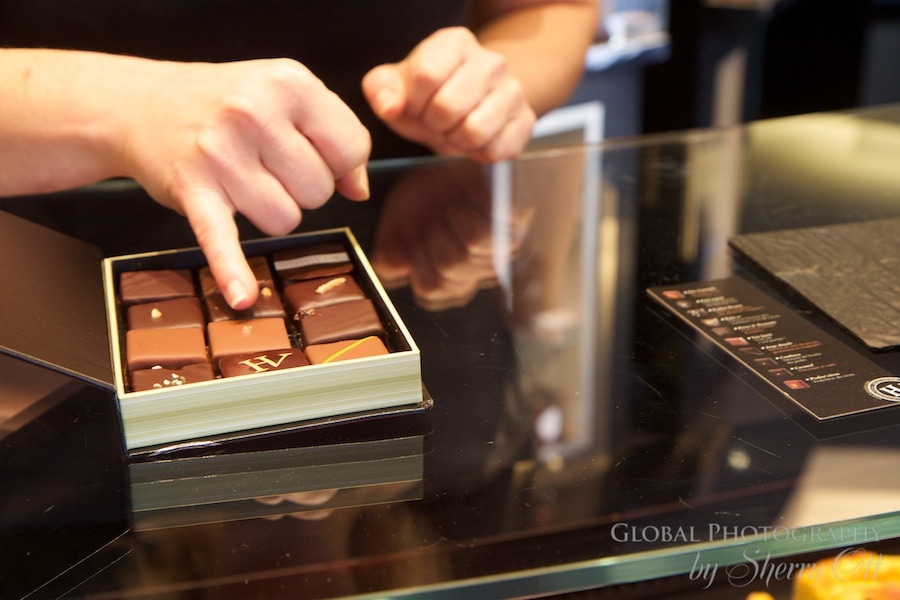 Learning about the chocolate flavors at Hugo et Victor

Started in 1977 and known worldwide for their ganache. This is chocolate for adults. Even their macarons are made with ganache and a butter cream mixture â a signature recipe for them. They use 3 main fillings for their chocolates â ganache, praline, and mousse â plus some specialty alcohols. I tried a cinnamon ganache which was delicious and a crepe praline. The crepe praline reminded me of an inside out crepe with nutella â the crispy crepe pieces that made it taste like nuts and gave it a great texture and crunch. 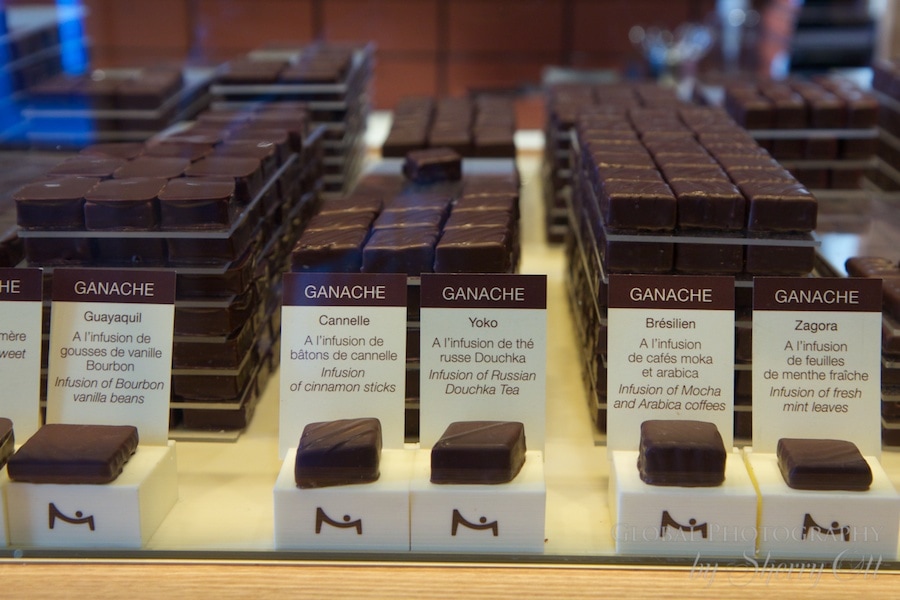 The chocolate house of Pierre Herme is definitely in fashion â as evidenced by the big line of people outside waiting to get into the impeccable and tiny show room. I felt a bit claustrophobic, as a few minutes inside as not only was there a long line of customers â but behind the tiny counter there were 8 employees trying to serve the customers. They all looked like Robert Palmerâs backup girls if you ask me â a mix of chocolate, fashion, and rock and roll.

Pierre is known for his large pastry cake that looks sort of like a giant macaron. And yes â his macarons are to die for. He definitely gets the award for being the most avante guard of the chocolate houses we visited in Paris.

He was a master of flavors putting together flavors of his macarons that no normal person would typically consider such as foie gras and chocolate â the one I tried. It was surprisingly delicious. It had just a hint of foie gras taste to it, but it was mainly light and creamy â practically like a mousse. He was also showcasing seasonal flavors such as truffle in his macarons.

Each flavorful masterpiece was 2Euro each â a high end price tag for high end pastry. 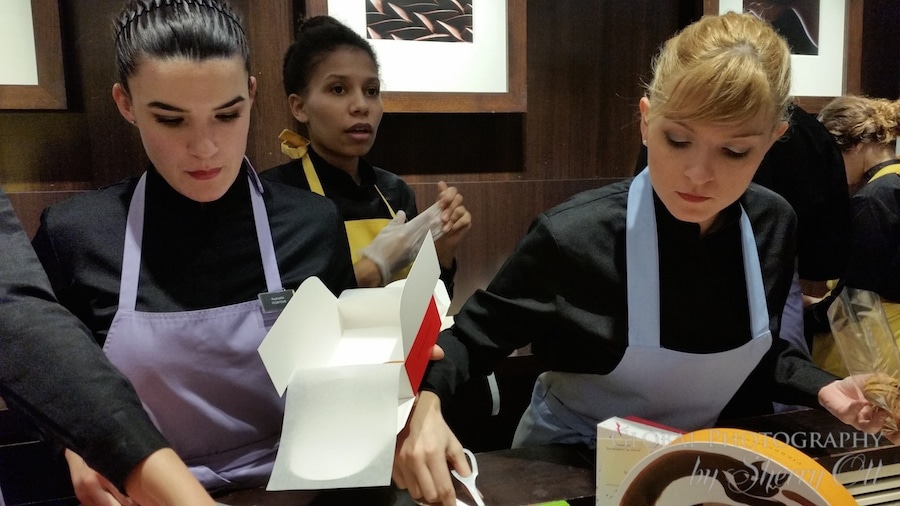 The Robert Palmer chocolate girls at Pierre Herme in Paris 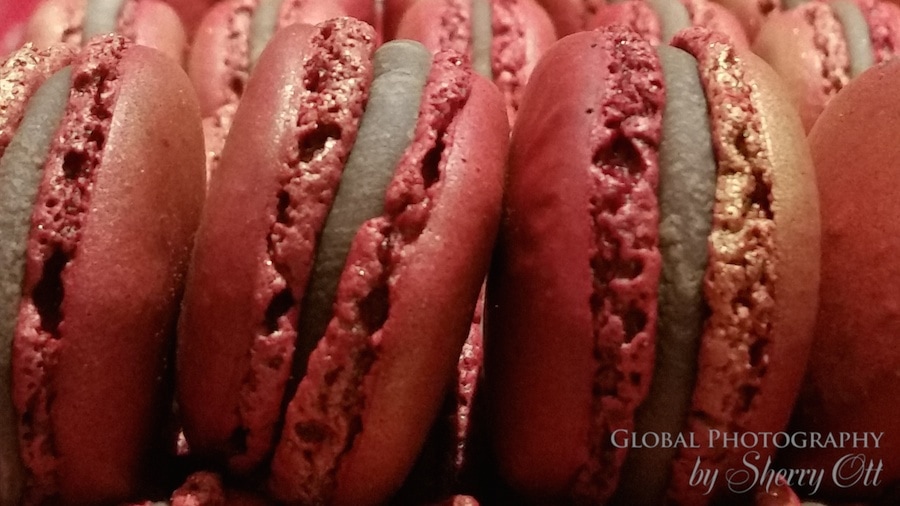 The traditional powerhouse and elder of the group. As soon as we came to his corner store and peered in the windows I immediately knew I was in Paris â his store was exactly what I would have expected from a Paris pastry shop. Beautifully showcased items in the windows, welcoming neighborhood vibe and a crowd of people inside.

Gerard is an older pastry chef – Caroline thought he was nearing 60 years old and trying to get ready for retirement. However heâs been baking his traditional loved recipes now since the early 80âs and hadnât really named a successor according to Caroline.

He still mixes his macaron batter by hand each morning. Itâs a precision process and apparently by the looks of the crowd inside he has the right precision. I had a salted caramel macaron as I oogled the beautiful fig and berry cakes which were like works of art. 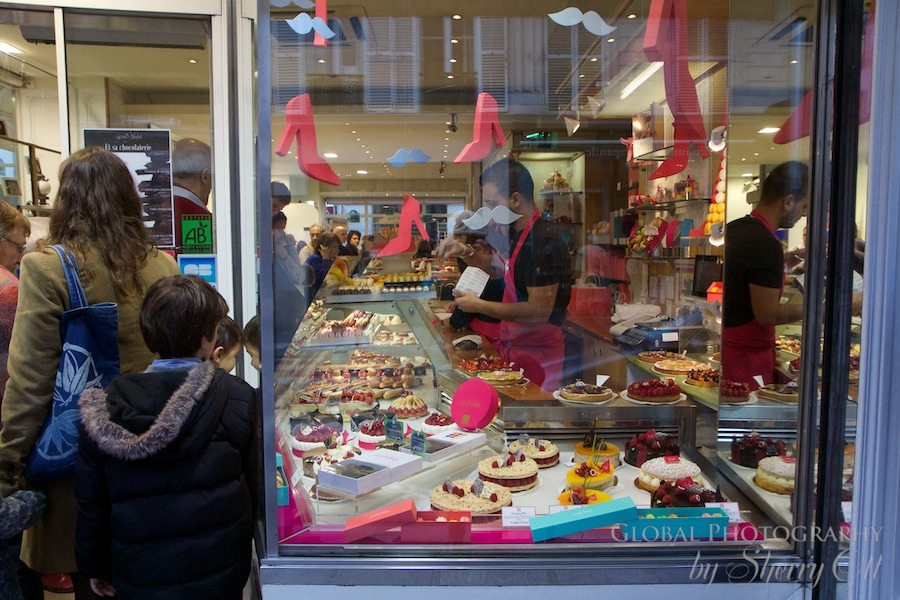 Pierre appeared to be more of a scientist than a baker. He is all about where the chocolate comes from â starting with the cocoa farms. He works very closely with the plantations and seems to approach his business from the scientific side. It was the first chocolate house we entered that had a vast variety of chocolate bars for sale.

The packaging on each bar was amazing to read. It read more like a wine label than chocolate label; talking about aromas and tasting notes in addition to where the beans came from. It was really refreshing to see this side of the chocolate industry.

He also sold little filled chocolates â small bite sized pieces that looked practically like trays of makeup rather than chocolates! I tried the pink peppercorn with dark chocolate â one of my favorite combinations. 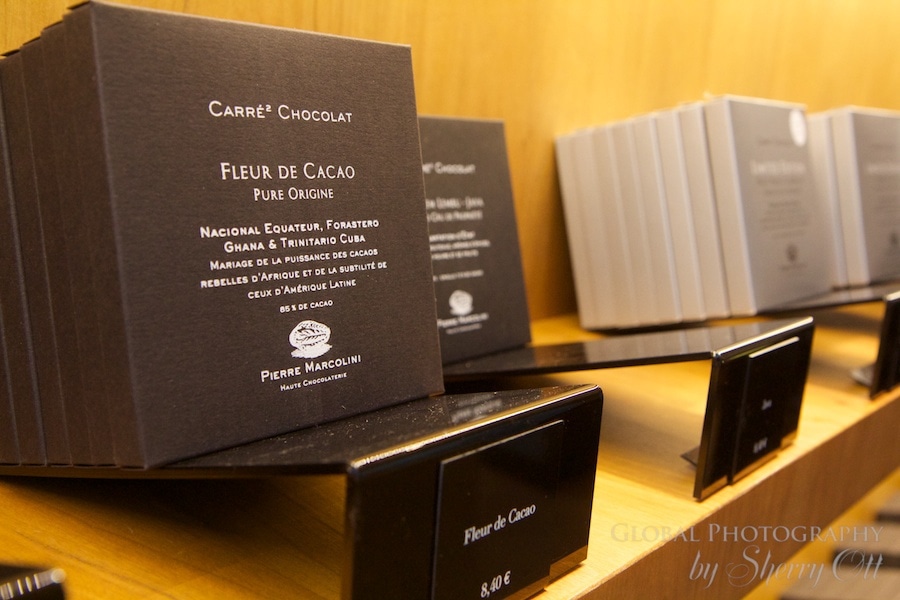 The science of chocolate at Pierre Marcoline

Chocolatier et Caramelier â A French name, but a Japanese twist. The Henri Le Roux brand was bought a few years ago by Mr. Ishii from Japan. We had the pleasure of actually meeting Mr. Ishii while in the store. I was surprised to find out that he didnât come from a pastry or chocolate background â but instead he came from a fashion background.

However, clearly he had put years of research into his products. He took the traditional French styles and gave them an Asian twist which I loved. I tried the sesame filled chocolate as well as the green tea chocolate and loved the uniqueness of them.

He also had a great variety of colorful caramels, which was a really nice change from chocolate. I had never seen so many flavored caramels – I tried the cherry cardamom one and was pleasantly surprised with the tartness after the excessive chocolate we had all afternoon. 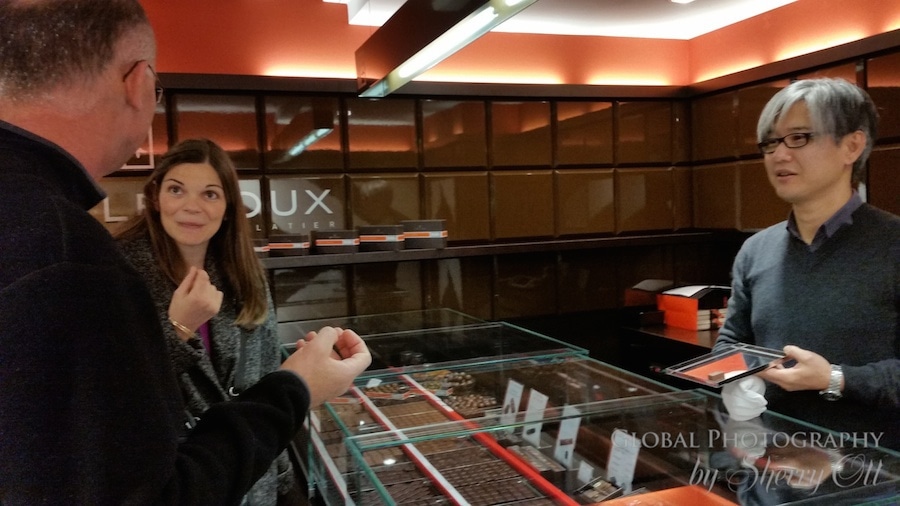 Paris chocolate with an Asian twist 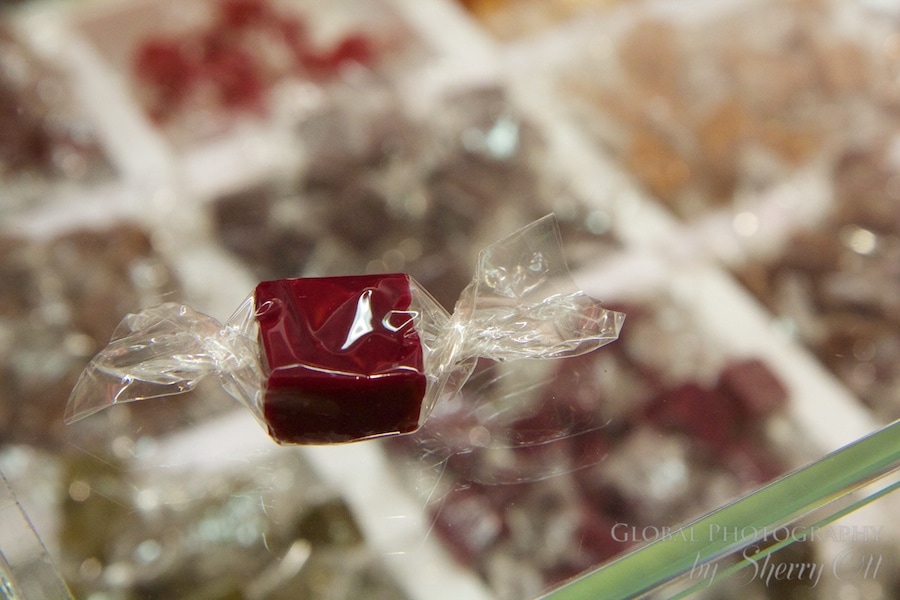 Focused on the gastronomy of chocolate. They not only had a little show room, but also a cafÃ©. The cafÃ© kitchen was enclosed in glass so you could see the chefs at work preparing pastries and chocolate. This shop had some different chocolate products that I had never seen before as well as thick hot chocolate that might just put you into a chocolate coma.

I was most impressed with the little chocolate spice beads. Spices such as rosemary, pepper, or basil were coated in chocolate and then could be eaten for a blast of spicy flavor or used for adding to your cooking. I was really intrigued by this new way to cook with chocolate and pleasantly surprised by the flavor of these little chocolate pellets. 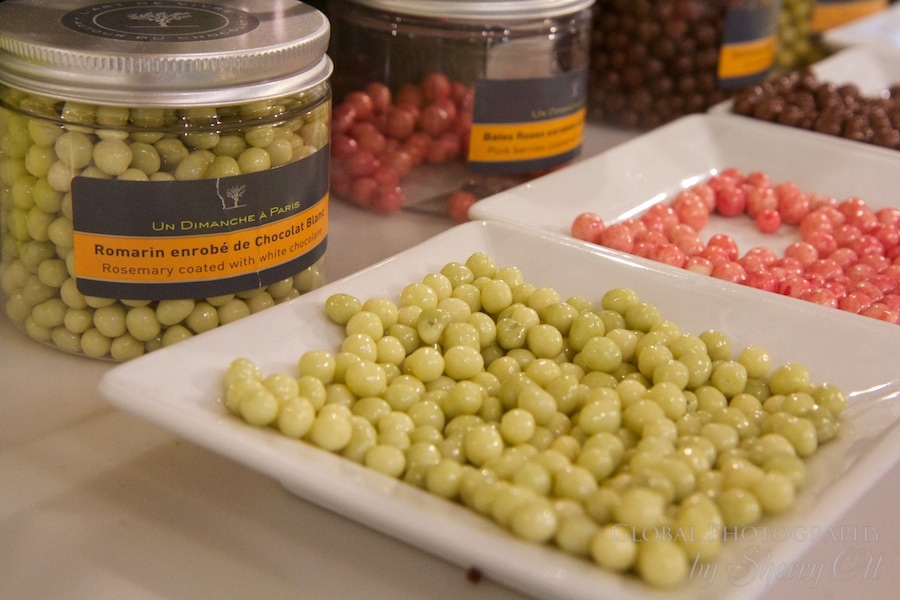 Cook and flavor with chocolate!

The sculpture. A life-size tiger devouring chocolate lie in the front window of Patrick Rodger chocolate house. The tiger was made of milk chocolate by hand and gave the whole store an amazing chocolate aroma.

The store design was very minimal with a bright turquoise coloring. There were no labels on anything requiring you to strike up a conversation with the women who worked there to learn more about the flavors. I asked the woman what her favorite was and she handed me the citron basil chocolate. Probably the most surprising and intense flavor I had all day! It was so zesty with an aftertaste of light basil â delicious! It was the perfect ending to this chocolate afternoon as it sort of served as a palette cleanser. 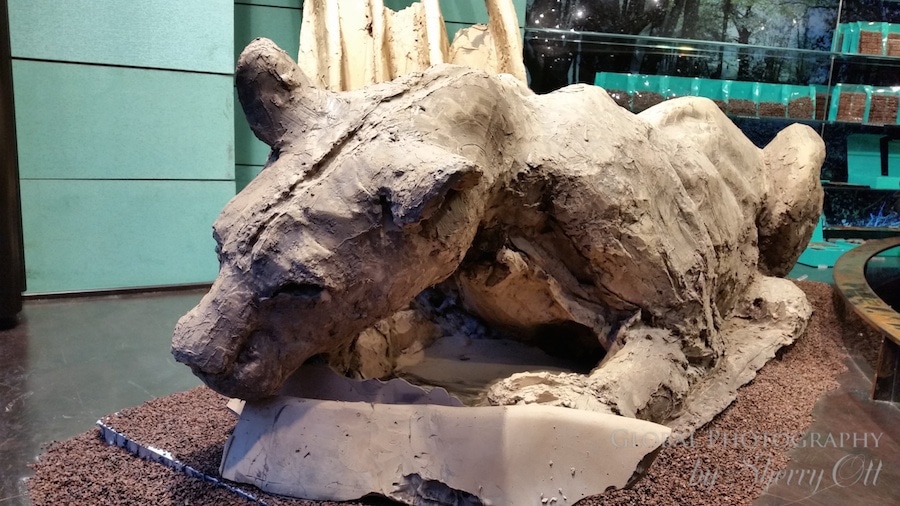 I never knew there were so many Paris chocolate houses in the small area of Saint Germain des Pres â one would think that it was too many â but then again each were so distinctly different from the other.

Plus â can there ever be too much chocolate?

Chocolate Tour Information:
Paris Chocolate and Pastry Food Tour
Come with a sweet tooth – stops at 9 places and have samples at each one!

Disclosure: I was a guest of Viator Travel on this Paris Chocolate Tour, however all opinions here are my own.