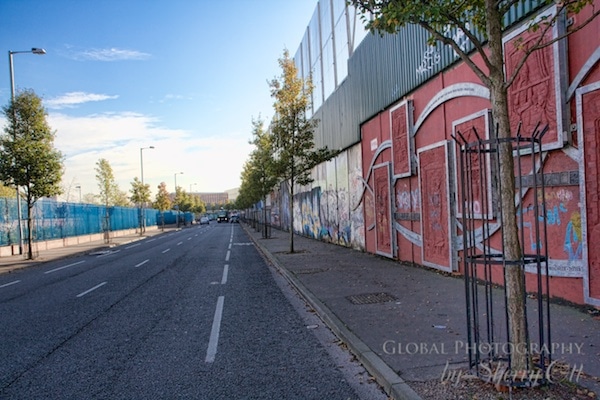 I looked at my Google Maps serving as my GPS on my dashboard and was completely confused. The numbers made no sense. The GPS voice started talking to me as she always did, âin 2 miles turn left onâ¦.â Wait a minute â miles? My brain had been trained to kilometers for the last 2 weeks on the Wild Atlantic Way and now all of a sudden everything was in miles. Then slowly the veil of fog was lifted from my brain â I must have crossed over into the UK/Northern Ireland and they use the metric system. I drove the rest of that afternoon in disbelief as I hate to admit this next sentence â but itâs true. I had no real idea that Northern Ireland was still a part of the UK â until now.

The world is big, I was young when all of this Irish civil unrest happened, and I was too busy caring about what to wear to high school rather than what was going on in Europe â a place I never thought I would go to in my lifetime. I wasnât interested in the world, history, current news (except for what scandalous thing Madonna was wearing or doing), and I certainly didnât care about travel. However, now as an older, wiser adult much has changed â yet Madonna does still fascinate me. But I digress, for me travel is about learning, so my trip to Northern Ireland took on a new goal now â to learn as much as I could about this Irish history, and to better understand the current state of relations today.

After finishing the Wild Atlantic Way in Donegal Ireland, I headed for Northern Ireland and Belfast sightseeing. Unbeknownst to me at that time I crossed countries, currencies, and metric systems yet I didnât even cross a border â nothing â nada. No passport, no stern looking officer, no gates, no nothing. No wonder I was confused!

I decided to take a guided tour in Northern Ireland via Viator Travel in order to get more educated on the area, specifically Belfast.

âWe have a complicated government here.â Our Black Taxi guide Gerry said as we stared at the one of the 22 remaining Peace Walls that still divides the city between traditionally Catholic and Protestant neighborhoods. Let me just restate that â âthat still divides the cityâ â this echoed through my head. He went on to tell us that the walls were erected to minimize the communal violence between the groups during Belfastâs troubled past â yet they still stand today because people feel that they need them. Yes Gerry â you do have a complicated government and society here. 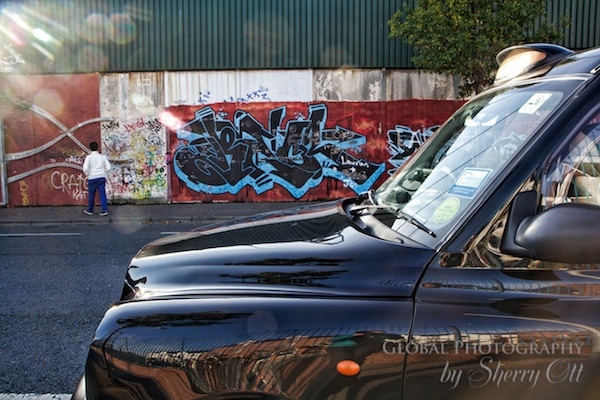 Black cab tour in Belfast shows you the murals and informs on history around the city.

The Black Taxi sightseeing tour was eye opening, as we learned more about the history of the conflicts, and the current state of the city, which to me was the most disturbing part of the tour. Yes, Belfast has gotten better, but there was still this raw uneasiness about it that I couldnât shake. As Gerry took us around the peace lines pointing out and explaining murals and martyrs I had the same feeling as I did when I was in Beirut â a troubled city that could go off at any time. As I walked around these key âhot areasâ of Belfast, I felt like angry people from the dead were staring at me; everywhere we went were surrounded by murals of martyrs. 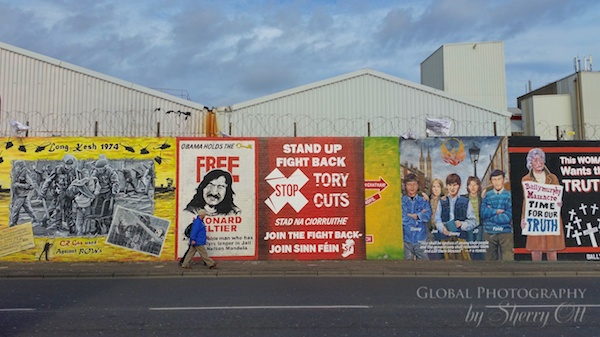 The peace walls are from a few hundred yards to over three miles long. They may be made of iron, brick, and/or steel and are up to 25 feet high. Some have gates in them that allow passage during daylight but are closed at night. Yes, the gates are really closed every night at 7PM still today in 2015. I couldnât even begin to comprehend a city where gates close due to Christian differences. For some reasons itâs easy for me to brush off the Muslim Sunni-Shia conflicts as I am still rather removed from the Islamic culture. But Christianity â well, thatâs how I was raised and I somehow had trouble grasping this division â today in 2015. In fact I kept thinking about the Middle East and how itâs easy for us Westerners to look down upon the Muslim conflicts from a far, but here in Western Europe the same thing happened/is still sort of happening with Christians. Seems like maybe we weâve got a little pot and kettle situation. 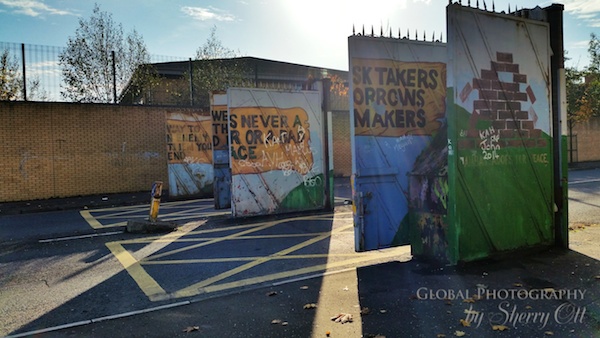 Gates close at 7PM in this neighborhood every night.

Gerry explained the timeline â the Troubles, the inequalities in voting/education/business, and how Belfast is attempting to move forward today. He took us to the Clonard Church and monastery where secret peace talks took place, and finally he drove us to the peace wall on the Protestant side to sign it. This part of the wall has become the worldâs peace petition in a way, starting when both Bill Clinton and the Dalai Lamma signed it poignantly. 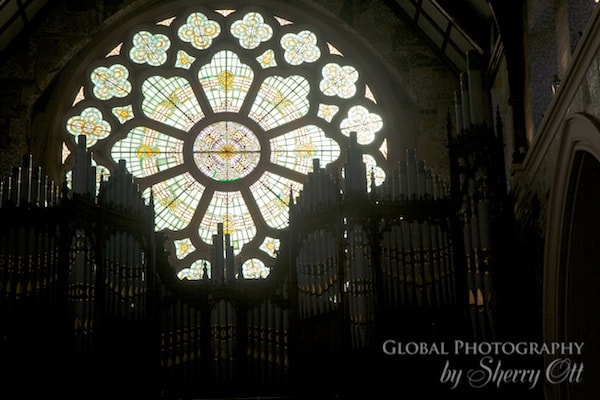 I spent time reading all of the moving messages on this wall and left my own. Northern Ireland has come a long way and is moving in prosperous direction, yet in the back of my mind all I could think about were those gates we passed through in the Black Taxi and that they would be closed at 7PM that night. It still makes me shudder.

I openly admit that before this Belfast tour, I knew and understood very little from the conflict in Northern Ireland. I vaguely remember the IRA and bombings in the news â but I was a teenager and honestly I didnât really care. But this trip to Belfast connected me once again with what I love about travel â itâs a learning experience. 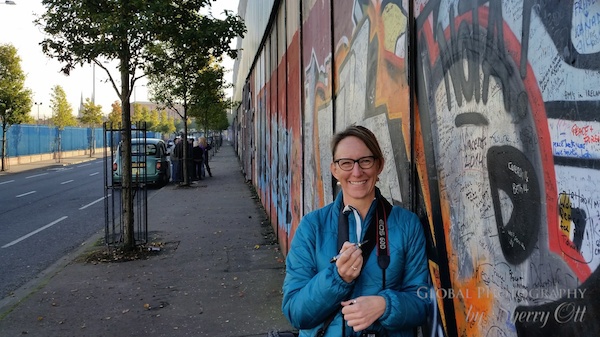 Leaving my message of peace in Belfast.

Check out the Belfast tour in Northern Ireland here!