The Mother of All Project Plans â Ancient Egypt 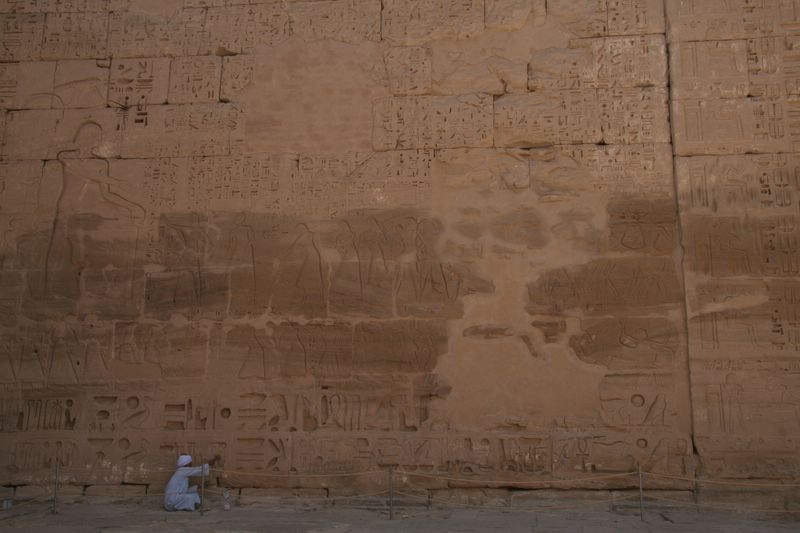 I must confess â Iâm not really into ancient sites, itâs just not my thing. I was bored by Pompeii, disinterested in the Parthenon, and I skipped the Roman Forum altogether â for some reason â these places just arenât as interesting to me as simply going and sitting in a cafÃ© and people watching present day culture, or trekking to a village and meeting the locals. However â when you travel around the world, I canât have people saying to me, âWhat do you mean you didnât go to Pompeii?!!â in shock and horror. Theyâd look at me as if I was an idiot. In fact â Iâm not real sure if it was a good idea that I admitted to never going to the Roman Forum – but you can lecture me later on that. So when I arrived in Egypt and realized that one of the big draws to Egypt is all of the ancient temples, and sites â I didnât exactly jump for joy. Sure, I really wanted to see the Pyramids, but beyond that, I honestly really didnât care too much. However â a portion of the tour was about visiting all of these ancient sites. We visited Abu Simbel, Valley of the Kings, the Pyramids, Luxor Temple, Philae Temple, Kom Ombo Temple, and Edfu Temple, Medinat Habu Temple, and the Sphinx. For someone who isnât a temple personâ¦this is overload. However â I did try to enjoy it â I tried to find ways that I could get excited about it, I tried to walk into the site and think about what it was like when it was bustling with people and functioning as a temple. I was rather impressed with how well preserved all of the sites were â so well intact â it seemed almost fake. However â I found that the most intriguing thing for me about temples â is simply, how the hell they got there and how long it took them to build it.

In my old life I was a Project Manager. My job was to understand what the customer wanted, and break it into hundreds of achievable little tasks that when done in the correct order would yield the final product. This also meant that I had to acquire and assign the resources to the tasks, deal with delays and budget overruns, and provide constant updates to my customer. Some projects were harder than others, some took a couple years, some took a couple months. So, when I started touring around the temples and tombs of Egypt â the one question that kept coming to mind was â âhow did they ever put together a project plan for this?â Think about it, something like Abu Simbel took about 20 years to build. Lifespans in Ancient Egypt were short. So that means that there was turnover during those 20 years, plus, itâs a good bet that the original project manager assigned to the Abu Simbel project also died before it was completed â so a new person had to take over. Hell, the customer didnât even live long enough to see the finished project normally. Your project team for a site like the Pyramids may have included about 50,000 men. My typical project team consisted of 20 people â and that was hard enough to control! Someone might not be pulling their weight, someone doesnât get along with the next person, someone thinks they deserve a better position, someone always shows up to work late â the list of people issues could go on and on. Dealing with those issues with thousands of people â well, that takes an immense amount of patience and organization.

We live in a society today that is all about immediate gratification. I think thatâs why I struggled so much in understanding how these temples were ever finished. How in the world did you motivate people to keep working for years, and years, never really seeing the finished product. Or â better yet, when the king who backed the project died, how did it still get completed â especially when someone else was now in power. After the 5th temple I finally had to seek out some answers â so I went to Connie, the high school history teacher in our tour group to ask her how this all worked.

Once a King took power, he would decide upon how many âstructuresâ he wanted built â this normally consisted of a few temples (for he and his queen) that displayed his might and generosity, and a tomb for his afterlife. He would then discuss this with his appointed priests and provide them with the authority (papers with his seal on it) to get the job done. The priests were really the project managers in this ancient org chart. They were given this job because they were the only people in the community that could read and write, therefore they had a high up position in society and a close relationship with the King. The priests would go away for a couple of years and draw up the architectural plans to share with the King and get his final sign off. After this, the Priests real work began â he was responsible for gathering labor and making it all happen.

You would think that acquiring labor would be one of the hardest parts of the project â but it wasnât. Many people wanted to do the work – especially in the flood season when there were no crops to tend to. Working on a project for the King meant free food and lodging, people took pride in working on a royal project and showing off their workmanship/skill, and finally it gave you some good karma â because in Egypt â itâs all about the afterlife. The issue of turnover due to death or old age wasnât really an issue either as in those times, kids were trained in their fatherâs skills â so the child just took over where the father left off. By this theory I would have ended up an Engineer working for Catepillar all my lifeâ¦that would have been a site!

So, that leaves the question of what happens when the King dies before the work is done â does the work stop – or does it carry on. I think the real answer is , âit depends on how much the new King liked the old oneâ. However the Kingâs seal is supposed to be good after his death â therefore that approval that the priest got 40 years ago â is still valid and the project should be finished.

Like any good project manager â you always have to have a contingency planâ¦because something ALWAYS goes wrong. I wonder if the priests had contingency plansâ¦what if they ran out of herbs to make blue paint, what it the king died, what if there was a hieroglyphics strike, or what if centuries after you finished the temple, they build a damn on the Nile in Aswan Eygpt and you end up flooding the very temple that you worked so hard to create? This is exactly what happened to the famed Abu Simbel Temple. In 1960 a damn was built, it flooded the area and sent the Nubians fleeing to higher ground. It also threatened the existence of Ramses II great masterpiece. Luckily a team of architects from all over the world sponsored by Unesco embarked upon a huge plan to actually move the massive temple to higher ground. This would seem like an impossible undertaking as the temples are huge and intricate- but they did successfully move the temples to higher ground â cutting it apart and then putting it back together like a jigsaw puzzle. The temple now looks out over the waters of Lake Nasser.
By considering how they planned and executed these massive projects helped me visualize it and respect these temples. The Priestâs work was hard â but it demonstrates to me that Project Management is actually an ancient jobâ¦.and it was a good one to have back then! I still would have liked to see the Priests work breakdown structure, critical path, and gant chart for one of the temple projects. However â Iâve heard that the old version of Microsoft Project they were using was highly unstable â next time they should install the service pack!