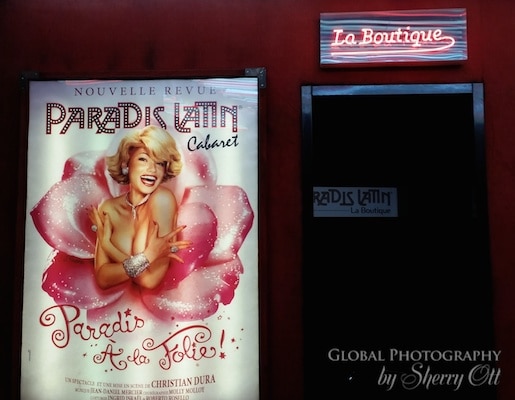 The entry for Paradis Latin – pink and glowing.

Somehow I have found myself in the odd situation of attending a Paris dinner theater cabaret show solo. I have done a lot of things in my life solo and it normally doesnât phase me â however I must admit I was slightly self conscience as I was seated at my table for one at the Paradis Latin Cabaret theater.

The good news was that I was going to get loaded â I had a bottle of champagne and a bottle of wine all for solo me. The bad news – I only had 3 hours to drink it and I knew I probably wouldnât even be able to make a dent in it. 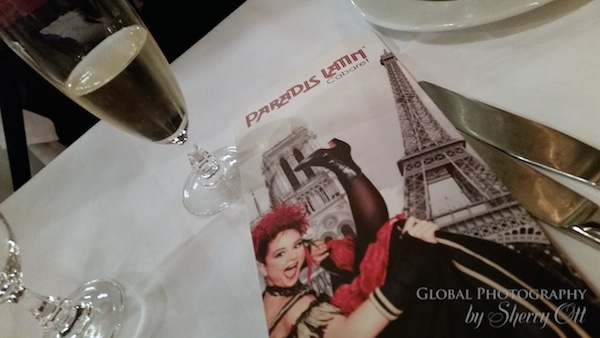 I was at the show for two reasons â I was there to do a review of the Paradis Latin Cabaret show, and second I am a dance voyeur.

Yes, if you want to make me very happy, tell me thereâs a new season of Dancing with the Stars or So You Think You can Dance. Iâm kind of obsessed with dancing shows, so I was pretty excited to get to attend one in person in Paris â even if I was without a date.

The Paradis Latin Cabaret is not About the Food

The food was nothing special, but it was as good as you would expect for a dinner theater where they are used to having big coach buses pull up with people piling out of it and into the theater. Serving the masses is never easy. But I enjoyed my foie gras, chateaubriand steak, and apple tart as much as any typical dinner. And the bottomless bottles of booze helped. 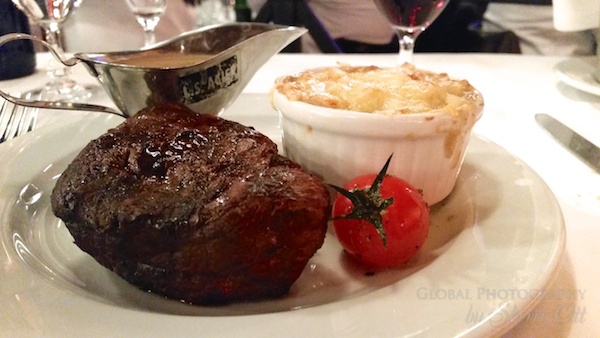 My meal was sort of secondary to the main attraction…dancing.

A photographer was roaming around taking the standard âLove Boatâ photos of the couples in attendance so they could take it home as a souvenir. As part of my ticket I too got to be photographed. Yes â just little ole me all by myself. Iâm sure this shot will go up on my motherâs mantle next to all of the wedding and family photos of my brother and sister.

âThis is my single daughter Sherry at a Burlesque booby show in Paris,â I can hear my mother say to her friends. Just furthering my relatives’ theory that I’m a lesbian since Iâm 44, unmarried, and boyfriendless.

Lets Get This Cabaret Started!

An hour and a half after I arrived, the show finally started. I was halfway into the bottles of champagne and wine by now â so I was ready for the quirkiness of Paris Cabaret â I was ready for boobs.

I looked around the audience as the lights dimmed and the music started.Â  I saw a family intently waiting for the show to begin.Â  You know youâre in Europe when a 12 year old boy is attending a Paris cabaret show. This is going to be a night heâll remember for a while as he goes home slightly tipsy and dreaming of boobies. 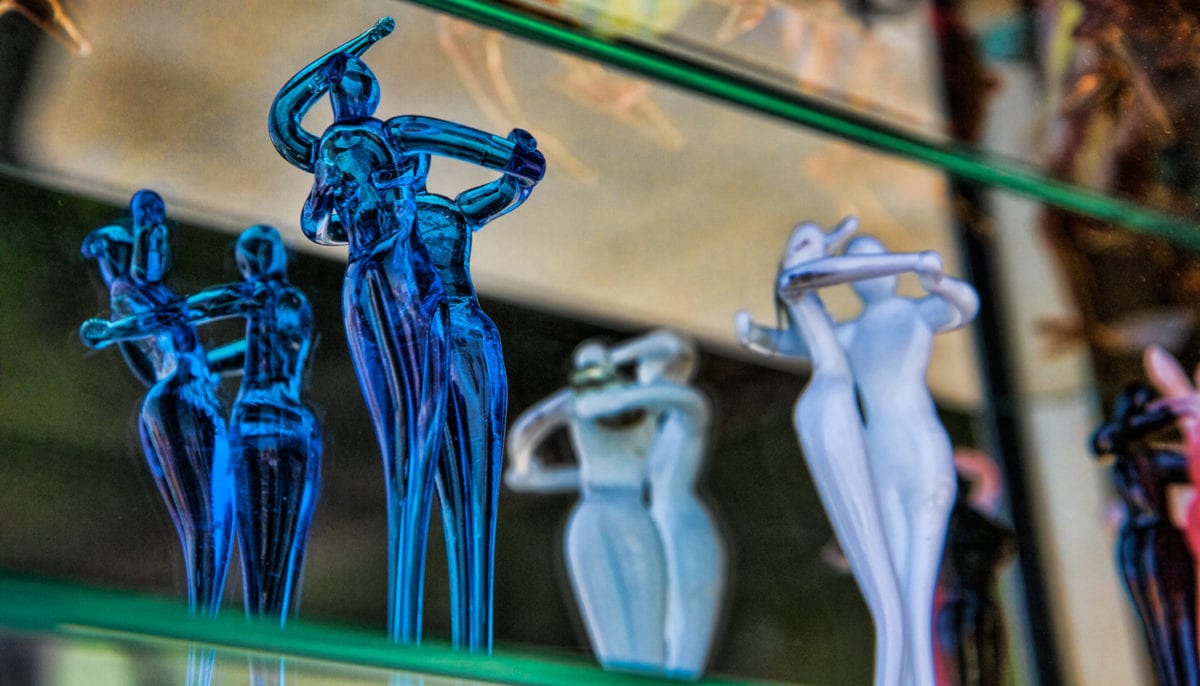 I was amused by the dance numbers in an equal mix of âthatâs coolâ and âthatâs strangeâ sort of way.

There was one number they called âTrainingâ which was basically a bunch of women dressed in Jane Fonda outfits doing sexy jazzercise. It even included a steamy locker room scene with an â¦âoh {wink wink}, I dropped my towelâ moment. Sadly no pictures were allowed during the show, so you’ll just have to use your imagination.

There were a number of times that the dancing and the sets reminded me of the movie Flashdance. Specifically the motorcycle carousel where the women got very up close and personal with their Suzuki Speed Bikes slithering all over them slowly taking off their motorcycle leathers revealing g-strings and nothing much more. Think Alex the welder from Flashdance does a strip tease with She’s a Maniac playing in the background.

Ballet at the Cabaret?

Next the evening looked like it was turning up the refinement level with a ballet. However it of course had a twist in it â they ended up getting practically naked. As I watched the two dancers do lifts and pirouettes topless with little g-strings, I thought that there were probably a lot of men out there that would like this version of Parisian Cabaret Ballet.

Lest you just think that there were only dancing boobies at the cabaret â there were other things too â such as the acrobats (who were fully clothed â whew).

âHeâs going to try something a bit dangerous now,â said the MC. I let out an audible laugh as I thought that the tricks he was already doing were plenty dangerous!

My favorite part of the show by far was the jaw dropping acrobat performances; an incredible juggler/unicycle rider and then a gasp-worthy trapeze artist who dangled above the audience with no net in sight. The man swinging just feet above our heads was really exciting to watch â even more than the topless dancers!

The night wound up with a traditional Can Can number which was my favorite dance number. Seriously â how can they kick their legs that high? And I’m talking about the men!

I wasnât the only one to leave the show with a smile on my face â the little 12 year old boy was grinning ear to ear. However, Iâm pretty sure his grin wasnât due to the bottomless champagne like mine was.

Â Paradis Latin Cabaret ShowÂ  Tickets and information
Need a place to stay while in Paris – then check out my favorite place I’ve ever stayed in Paris here!

Disclosure:Â  I was a guest of Viator Travel attending the Paradis Latin Cabaret Show.Â  However all of the opinions here are mine…and no I wasn’t influenced by the champagne or the boobies.