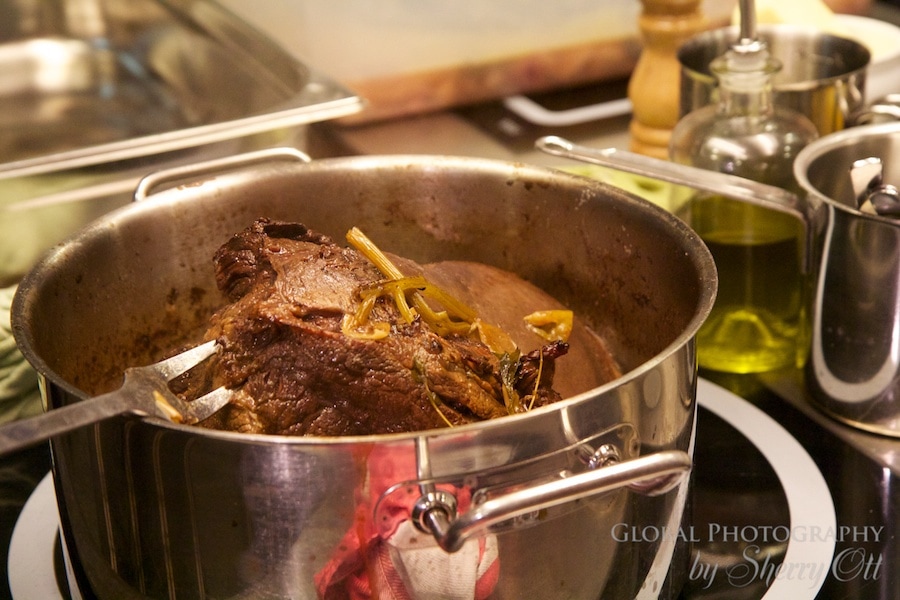 Sometimes you have to wait for the best…sauerbraten takes patience.

One of the best things about Berlin is the vast amount of ethnic food choices you have in the city. However â what about the German food â where is it hiding? Iâm happy to tell you that I found it – Sauerbraten and spÃ¤tzle! I was so happy I felt like polka dancing â in my lederhosen! After being in Berlin for 2 weeks and eating Indian, Mexican, Ethiopian, Thai, Vietnamese, and Russian â finally â I was going to eat German food. And I wasnât just going to eat it – I was going to learn how to make it.

Karina, my friend and Berlin expert, had suggested that I try out this cooking class in Kreuzberg in order to learn about some classic German dishes. Since she was also a closet sauerbraten lover â she invited herself long. Smart lady.

Together we entered Coledampfâs and Companies store/classroom. As I entered and started looking around the shop, my eyes focused in on the details â the space was industrial, metallic, and beautifully designed. This wasnât just a cooking classroom â it was more of a creative space for food lovers and chefs. The cleverly designed store section sold high quality pots/pans and cooking accessories to restaurants and uber foodies. However the space also included a lunch cafÃ©, a coffee bar, and a cooking âclassroomâ. Somehow this all fit together seamlessly as a shrine to food.

As I oohed and ahhhhed about the tables made out of doors and saw horses, the chairs, and the store design, Chef Ralf ensured we all had some coffee and instructed us to site down for a little sauerbraten history before we started the hands on work. 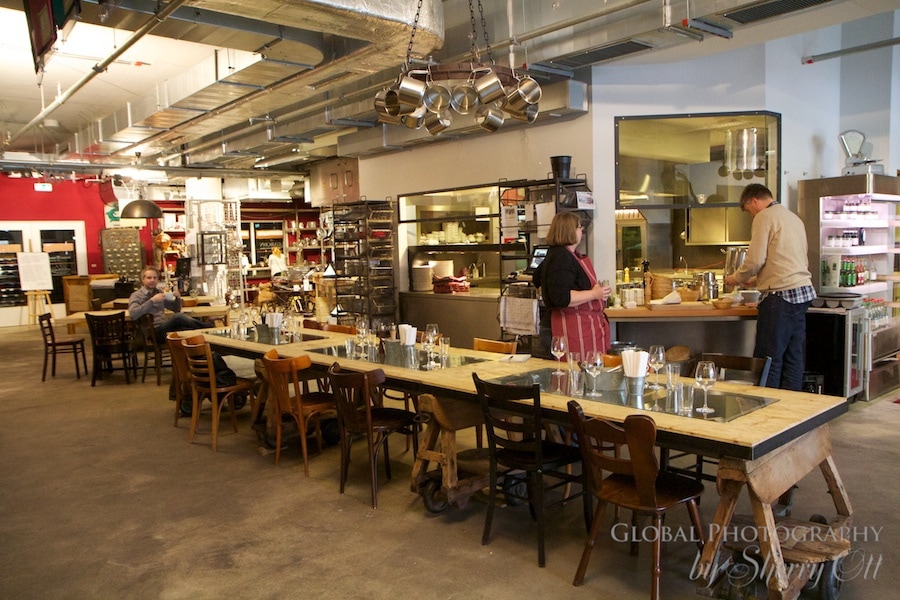 Sauerbraten has been around for over 1000 years and was originally a way to preserve food without refrigeration. It became a popular way to keep meat and Ralf told us that originally it was made with horsemeat. It is of utmost importance that the marinade ingredients be of high quality and that you provide ample marinade time â 48 hours minimum. The sauerbraten weâd be cooking today had been marinating for 4 days!

He pointed to a little chalk board full of diagrams and loads of German words â yes â this class was in German â so I was at a slight disadvantage. But my secret weapon was Karina who tried her best to translate for me â so forgive the lack of detail in this post â I will let the photos do most of the talking for me. Karina did say that the quality of questions being asked had her a little intimidated â the people in this class were pretty serious about cooking! This was definitely not a little tourist class â the class was full of locals who were part of a longer cooking series that Coledampfâs offered. However individuals like Karina and I can join any single class at any time too. 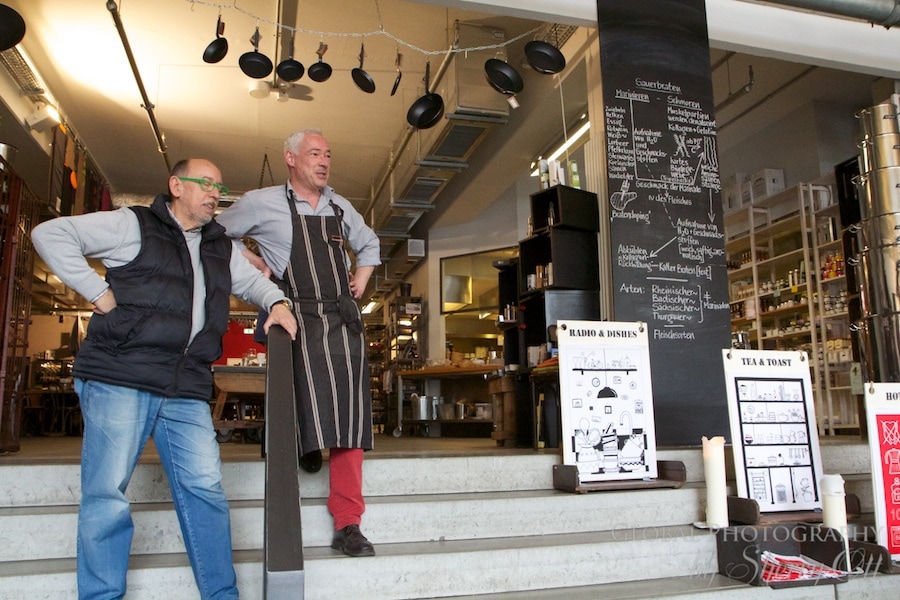 Chef Ralf and co-owner/win expert explaining the history of sauerbraten. 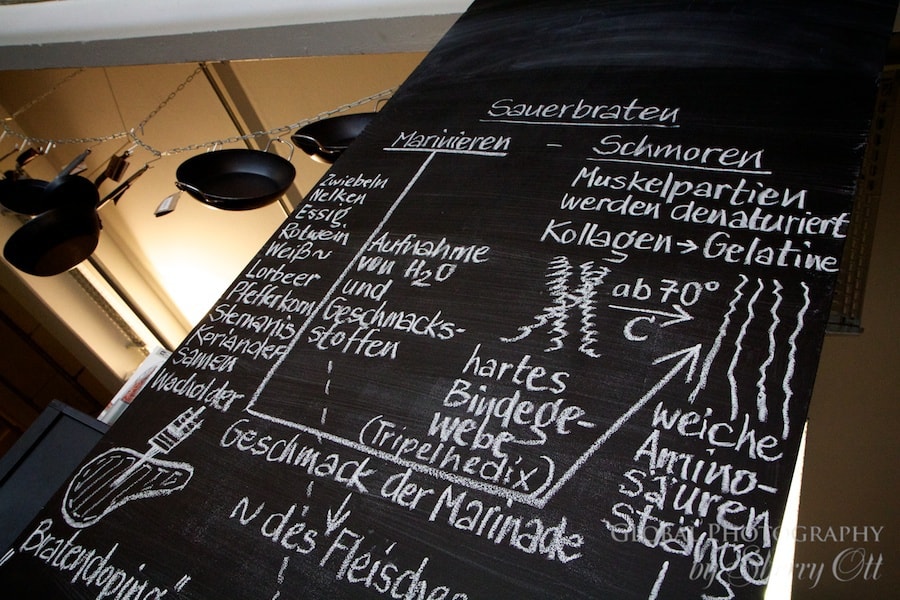 A sauerbraten diagram…in German – luckily I had Karina to translate!

Our German Chef and Instructor

Chef Ralf handed us an apron and we entered the metallic kitchen. I felt as if I had walked onto the set of Germanyâs Next Top Chef! We didnât really get recipes and it wasnât a step by step type of class â instead we all served as sous chefs helping out Ralf and his real Sous Chef did pieces of the meal. We were making not one, but FOUR type of sauerbraten â one of which Chef Ralf himself had never made before â fish sauerbraten. We also had rabbit sauerbraten, lamb sauerbraten and the traditional beef sauerbraten being marinated. I was happy I had a very light breakfast â this was going to be a day of eating.

Learning how to make SpÃ¤tzle

The chefs all decided upon the side dishes on the spot and started us chopping up squash, cutting onion, and creating the spÃ¤tzle dough. I have a little confession â I love spÃ¤tzle â LOVE it. I had never seen it made from scratch â so I was pretty excited about this process. However â after seeing the effort that it took to make it from scratch â I promptly decided that ordering it at a restaurant was much more enjoyable!

SpÃ¤tzle dough is a very hands on process â it literally has to be slapped around with your hands for about 30 minutes until it gets to the right consistency. Luckily I was not the one âhand-pickedâ for this effort as I hid behind the my camera as Chef Ralf took volunteers. However I did get picked to form the dough into noodles â a complex process to master as I quickly found out! 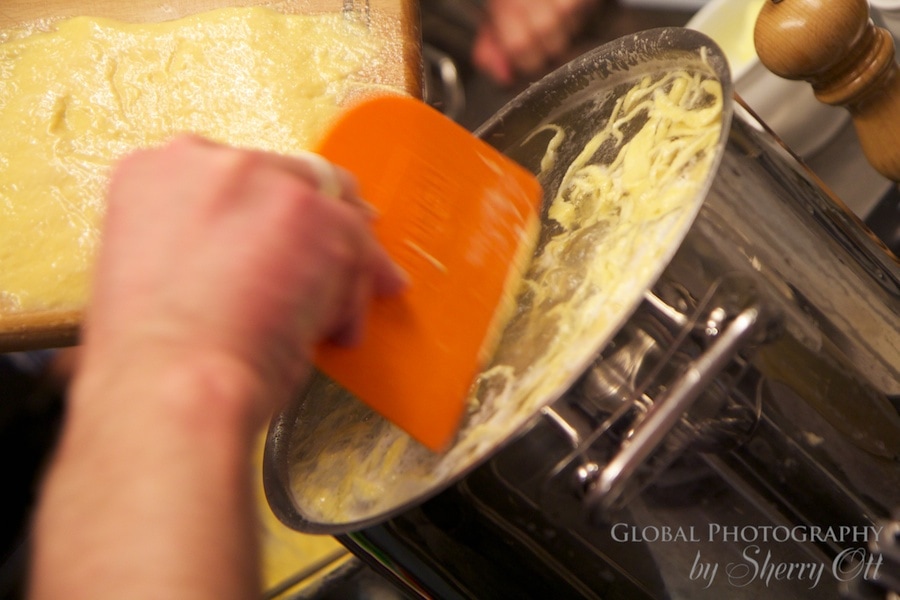 Making spatzle like your German grandmother would do it. 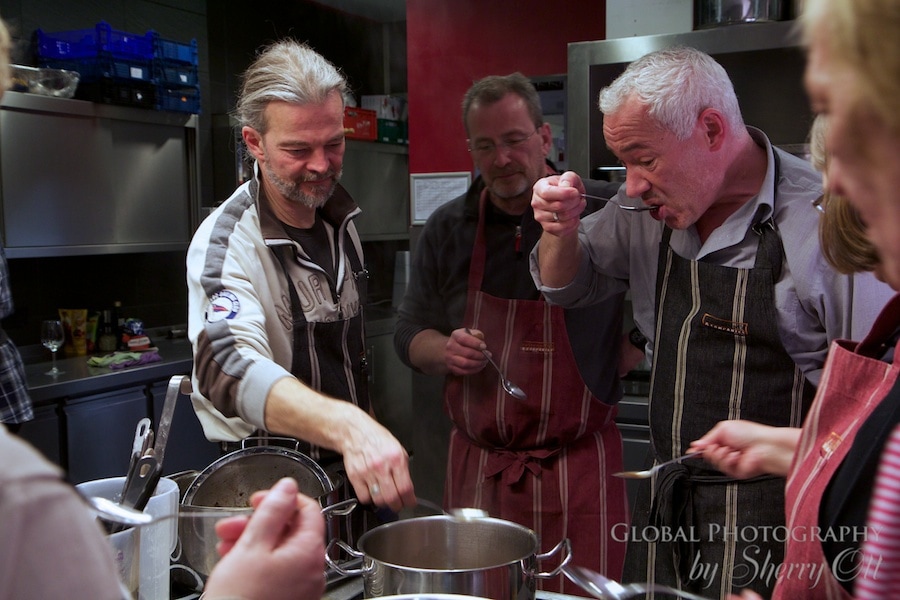 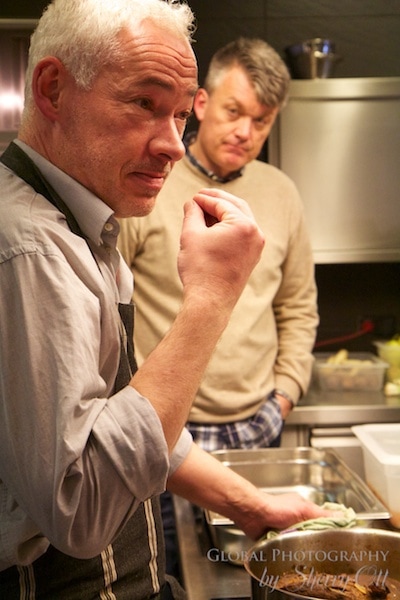 Nothing was measured â The chefs cooked to taste â this was the cooking big leagues. Slightly intimidating for me who typically cooks with a recipe and measuring cups! We all helped prepare the dishes and as each dish was ready we plated it up nicely and then all sat down at a communal table and ate it. Each sauerbraten had a side dish â so basically I ate 4 main dishes that afternoon â yes â I was sauerbraten stuffedâ¦and very happy. For each course one of the other owners picked a beautiful wine to go with the course â so it really was a complete food experience.

The Perfect Space for a Cooking Class in Berlin

I sat and talked with one of the owners to learn more about this innovative concept for a creative cooking studio. He said that the store was based off the saying âI know who made my shoes.â Meaning it was a community based business and they wanted a âfaceâ to the product. They wanted to create a relaxed atmosphere â even down to the silverware – you pick your own flatware out of the middle of the table â they want an inviting feel – not pretentious. 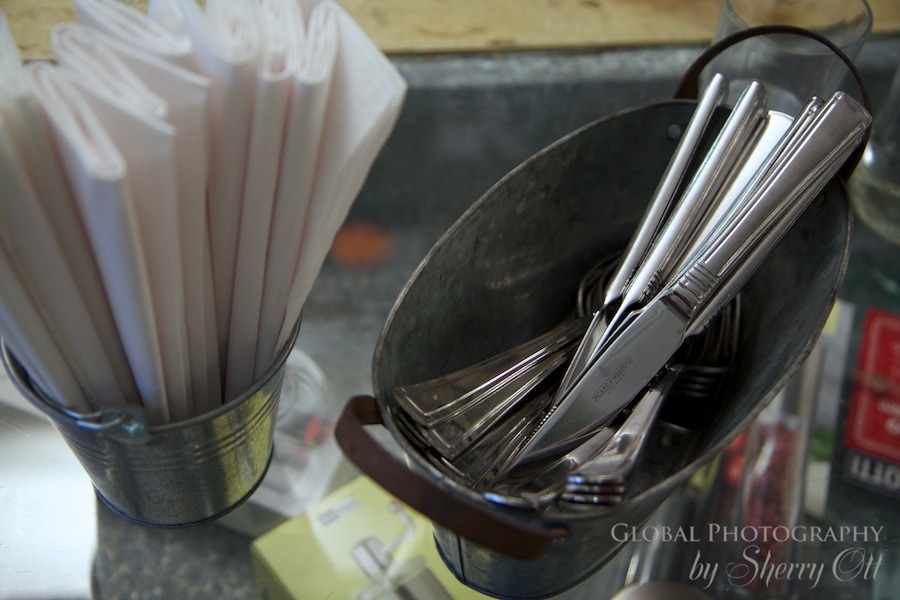 Help yourself to utensils! 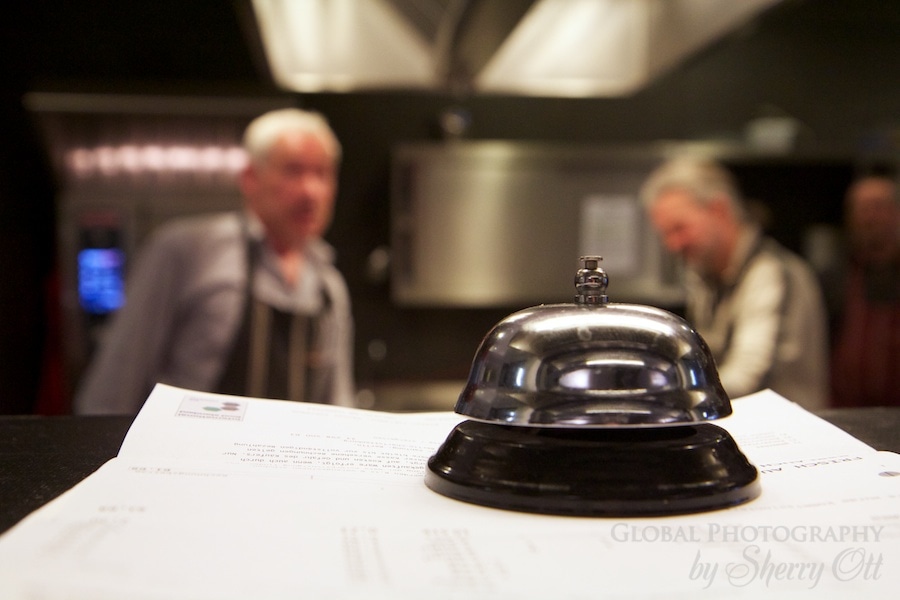 The 3 partners started the store/space/cafÃ© 1 Â½ years ago in this lesser known Kreuzberg neighborhood. They went into this neighborhood because it wasnât pretentious â it had more of a hard edge and they wanted to bring community to it. They are integrating into the area by working with the other businesses surrounding them and providing an inviting atmosphere.

They of course use local food sources. As I talked to him I was impressed that everything has a personal, local connection in a way. Whether it be the partners who run it together or the people they work with â it feels like a close knit group of people who enjoy what they do â it gives off a great vibe of energy and familiarity.

Five hours, a bottle of wine, and 1000âs of calories later we had finished our class. It was a fabulous day of cooking and meeting new people with innovative ideas. Plus â even though I was the only tourist in the class â everyone knew how to speak English and I was able to converse with the other students learning more about them, Berlin and Coledampfs & Company. 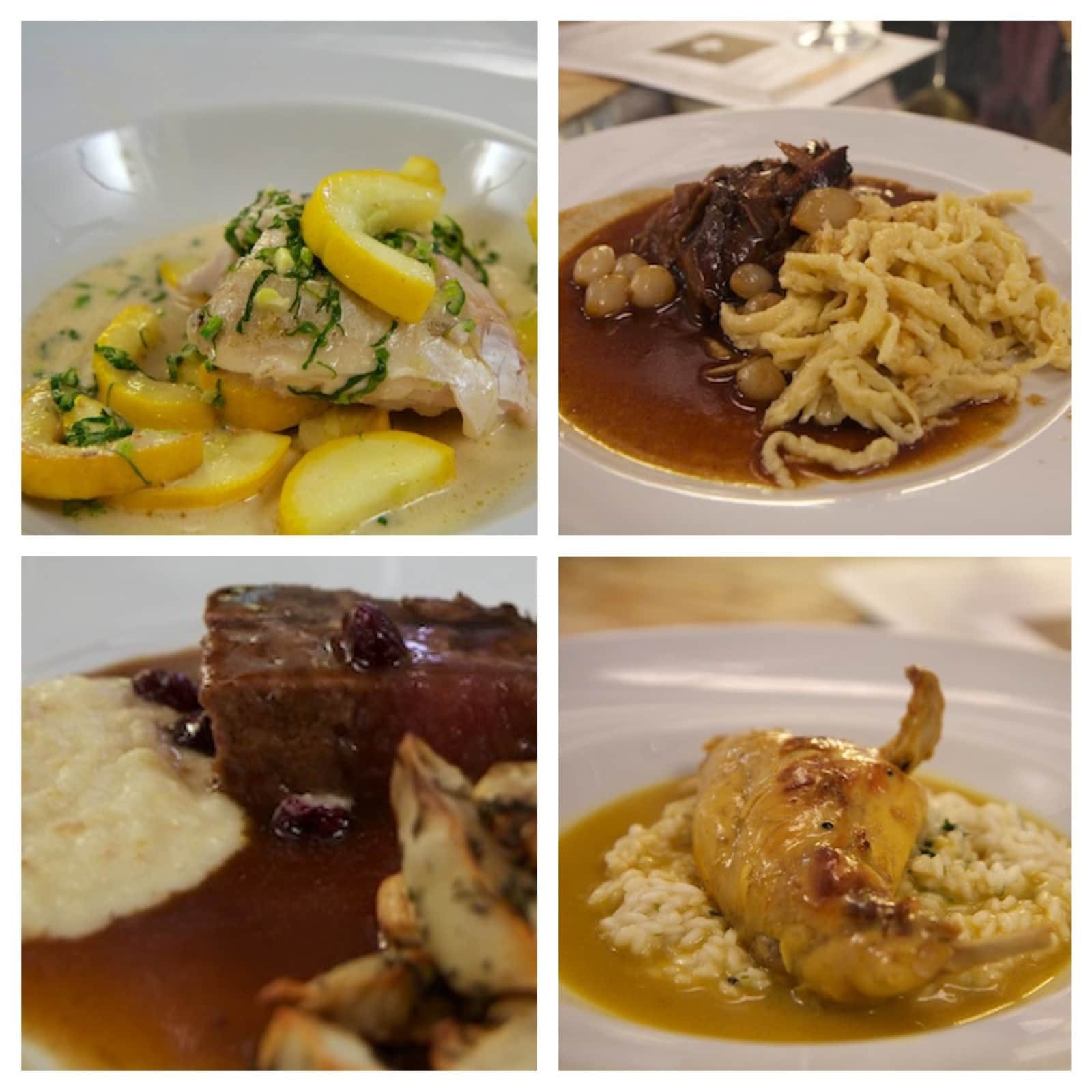 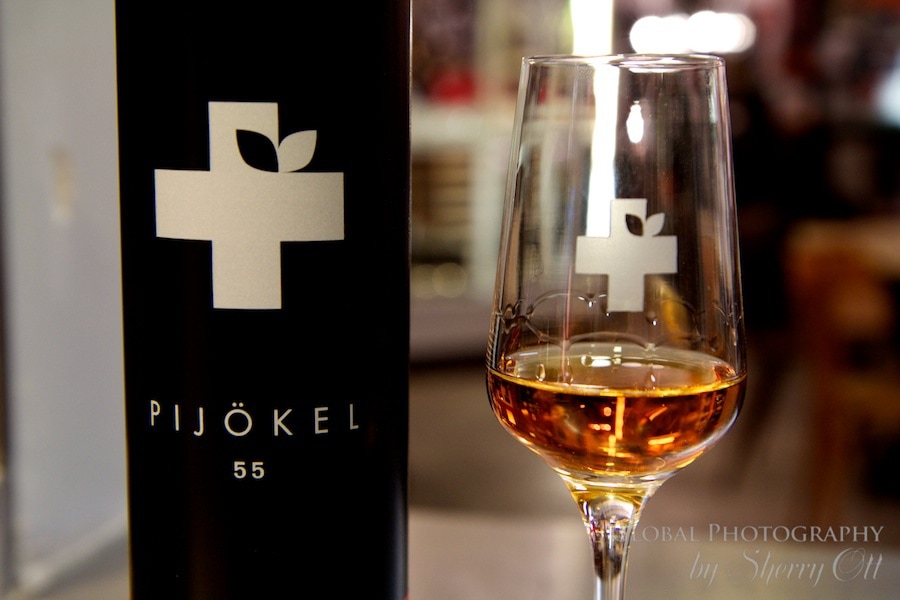 A new spiced liquor we were able to taste – yum!

More Info:
Coledampf & Company –Â https://www.colecomp.de/
Serve breakfast, lunch. Lunch is 6 to 16 Euro â try to make great food accessible.
Coffee bar and snacks open until 8PM
Culinary Friday â the restaurant has special themes and the feel is simple
Also includes a wine shop.
They also run events with their kitchen crew or you can bring in your own. 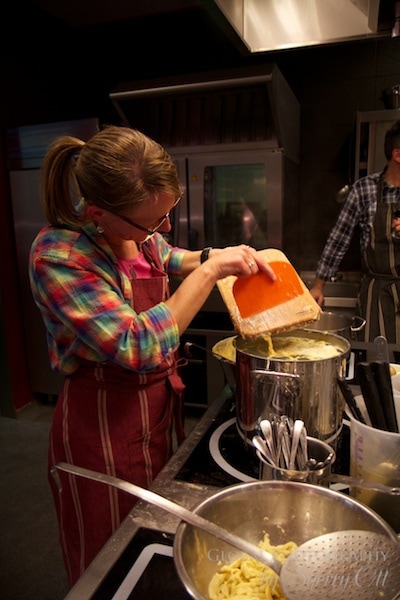 Me – trying my hand at spatzle! I did it!

Disclosure: Â The Living la Vida Local experiment is in partnership with Go with Oh. Â However all opinions expressed are my own.