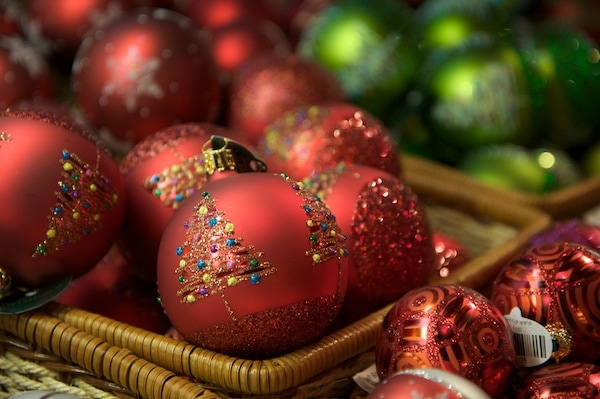 Sometimes I feel so fragile. Ready to break at any moment and last night was one of those nights. A night where I was confronted with my own solo culture, family culture, my religious culture, and my country culture. As I walked the streets of NYC on Christmas Eve my mind swam in confusion.

I chose this life because I’m damn well not going to wait around pining away for a significant other; but having said that…the solo life can be challenging at times.Â  Especially on major holidays. When I lived in Vietnam I told myself never again would I spend a Christmas alone again…it was torture for me.Â  Yet two years later I’m back, but it seems even a bit more pathetic because I’m in my home country, my old city…and I’m alone.Â  At least in Vietnam it was somewhat justifiable.Â  I take responsibility for my solo Christmas in NYC – not blaming anyone.Â  I chose this schedule since I was going to be leaving the country again right after Christmas and it made the most sense to do it out of NYC.Â  Plus – even though my family urged me to come back and spend the holidays in the Midwest, it didn’t make sense for my nomadic (don’t have a real job) budget. 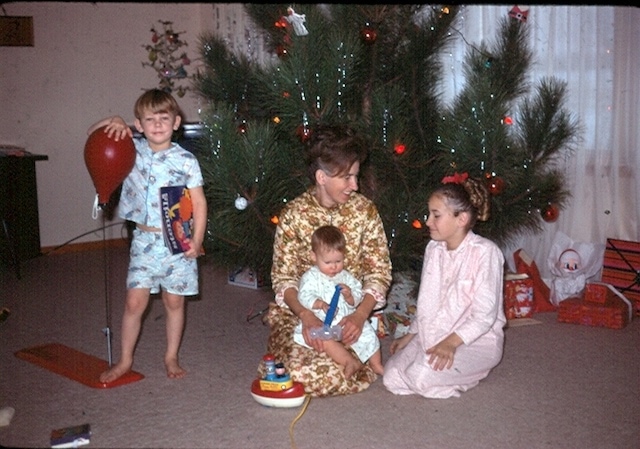 I’m the baby if you were wondering…

I realized tonight that I find it hard to be solo on Christmas due to my strong family culture around Christmas.Â  It floats back to my childhood mainly. Remembering Christmas celebrations with my family;Â  Christmas Eve meant church, singing silent night hold a flaming candle in my hands (always a stressful moment for a worrier like me), then we’d drive home counting Christmas trees in the windows, and enter the house with the smell of turkey wafting through the house. This smell meant a feast down by the fireplace were afterwords we’d watch the black and white version of a Christmas Carol on television and then try to go to sleep while overwhelmed with excitement.Â  This was our tradition and it is burned in my brain forever. Sometimes I wish it wasn’t so vivid; especially tonight.

This time of year reminds me of how much I long to be a kid again. It makes me yearn for youth and the traditions in my memory. Where I was never alone. It didnt matter if my brother and I fought that night because never once do I remember being unhappy.Â  When I was a kid I don’t ever think I thought about what my Christmases would be like as an adult. I certainly know I never imagined them like this. Vulnerable, questioning, fragile.

On a night like tonight, when memories float through my head and tug at my heartstrings, it’s hard not to question some ofÂ  my life decisions.Â  Even if they are fleeting questions that will disappear tomorrow when these holidays blues pass by me and I resume my normal life.

I’m not a super religious person.Â  And I hate saying this as it’s so overused…I’m spiritual rather than religious (ugh – felt like a dork even typing that).Â  Yet this time of year my old religion calls to me.Â  I think it’s more about the tradition and the family culture than it is about the message.Â  I went to a Christmas Eve service alone tonight and that’s when all of fragility confronted me.Â  Damn Church – maybe that’s why I don’t normally go!Â  I won’t lie…there were some tears shed.Â  I think they were shed for the memories of my childhood more than anything…and a few questioning moments about my life in general.Â Â  Silent Night is the trigger…it’s always the trigger…flaming candle in my hand or not.

After the church service I walked up the 5th Ave. by myself with my camera, amazed at what Christmas Eve in New York City was really like.Â  At 10 PM people were eating at Burger King, people were still working, and the streets were still bustling with people.Â  The subways were crowded, yet everyone was in a cheerier mood than normal.Â  The one thing that you can’t help but notice is that most of the people out still working were foreigners. I wondered what this holiday means to them. I also wondered about their own culture and considered what holiday in their culture is comparable. Then I came across a Gap store at 10:15pmÂ  that was still open and customers were going inside. It made me sad.Â  I just couldn’t stop thinking of my old Christmases past.Â  That’s when I decided to call it a night.Â  I had to get back to the warmth of the apartment I am staying in so that I could simply digest all of this and quite frankly end this torture I was putting my mind through.Â  I needed to sleep off the memories and emotions that were so tangible for me tonight. 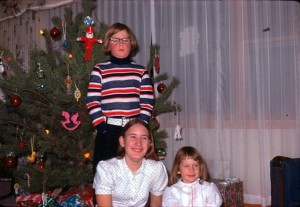 My brother sister, and I on Christmas Eve

It was a tough night.Â  But it was just that…a night.Â  Woke up feeling much better.Â  I think at times we need to have those fragile moments.Â  My solo strength was tested…but it survived in tact.Â  It also led me to many other learnings.Â  This holiday more than any other is about family for me. Put religion and consumerism aside- it is about family and relationships. I realize that currently my family members are my strongest relationships I have; thanks to travel I have become much closer to my family.Â  So there ya go – this fragile package is now all tied up in a pretty bow…ready to proceed…to overseas – more resilientÂ  than ever.

10 Responses to "Fragile – Handle With Care"