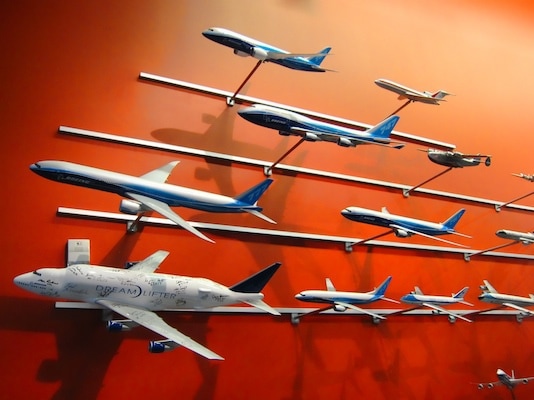 Boeing models come in all shapes and sizes

At one time I was going to major in Engineering. But as much as my father would have loved me to follow in his footsteps and choose a responsible career, I decided to pass up Engineering for the exciting career of Accounting. Whoo! Obviously accounting wasnât really my calling either, and neither was Information Technology, which was my career for 14 years. Iâm still not sure if I found my calling in traveling blogging â but I do know that I love the travel industry more then anything Iâve encountered yet!

Instead of becoming an Engineer (which I would have been horrible at), Iâve decided to write about Engineeringâ¦and travel. Yes â the two go hand in hand. In fact, you canât really travel without engineering. I recently visited the place where travel and engineering intersect at Paine Field outside of Seattle; the home of Boeing.

Paine Field and the Boeing manufacturing plant is located about 30 minutes outside of Seattle. Itâs hard to miss since itâs the largest building in the world by volume coming in at 4.3 million a square feet and 472 million cubic feet. To put it in terms everyone understands 75 football fields could fit inside.

Sunrise at Paine Field with Mt. Ranier in the background

The plant offers tours through their Future of Flight Aviation Center. The tour is kept under strict privacy; no cameras or notebooks allowed. After seeing a short video providing inspiration about the power of flight and subsequently travel, our small group all boarded a bus and drove around the runway to the behemoth manufacturing plant.

We were able to see 3 manufacturing lines on the tour, each operate a bit differently. The 747, 777, and the new 787 Dreamliner. We drove up to the plant and entered through the underground tunnel system (2.33 miles of pedestrian tunnels are located throughout the plant), and took an elevator to a catwalk-like viewing area above the assembly line. As I peered over the railing and took in the multiple planes and thousands of people below me, thatâs when it hit me; the sheer complexity of what was in front of me. 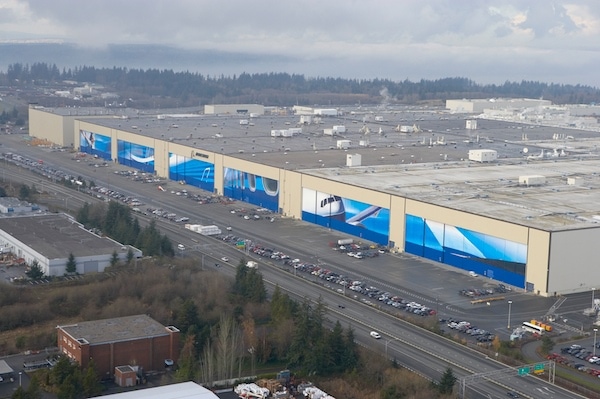 Learn How an Airplane is Made

Iâve flown around the world twice and been on countless airplanes, and not once had I thought about how the planes were made. Airplanes start from simple materials that when pieced together turned into something intricate, complex, and mind blowing. I think thereâs a reason why I never really thought about how a plane was manufactured before because itâs about impossible for me to grasp! Even as I peer out watching the planes being pieced together in front of my eyes I still have a hard time comprehending the big picture in front of me. 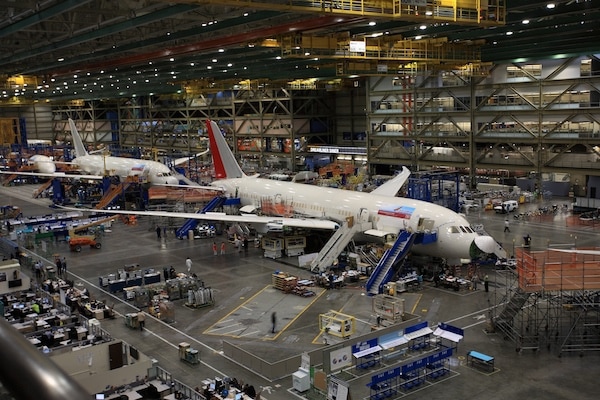 The tour guide provided us a multitude of information regarding each plane and manufacturing line. But I just leaned over the railing, rested my chin in my hands, and took it all in. It was hard to figure out where to look first; people seemed to be moving in every direction and the sheer size of the planes made everything a weird scale in my eyesight. I sort of felt like I was watching a complex honey comb with people flitting around doing their one piece of the process that was for the greater good of the hive. The site is home to over 30,000 workers, which is bigger than many towns in middle America.

I watched some groups of employees huddle around computer terminals looking at drawings and entering data, I watched some people solder pieces together, I watched a man individually pick out small parts (Iâm assuming screws and fasteners) from a parts inventory bin one by one. I must admit, that last vision kind of freaked me out. I think I could have stood there and stared for hours and hours there was so much to take in. There was a big screen at one end of the line showing how many planes were being worked on at a time and which companies they were for.

In the plant the plane was assembled, but once assembled then it gets wheeled out and sent through the painting process which places the company logos and colors onto it. The painting process takes 4 days to complete. However while in the plant you could easily see what companies the planes belonged to because each plane in progress had a big banner on it that said United, Delta, or Emirates.

The tour guide moved us briskly along to each assembly line and described how each process differed. It was exciting to see some of the first 787 Dreamliners being finished. The manufacturing process is fascinating as all of the parts and massive pieces of the plane are flown in daily on a special airplane called a Dreamlifter. While we were there the Dreamlifter took off to go pick up more parts; it looked like a whale trying to take off and fly. 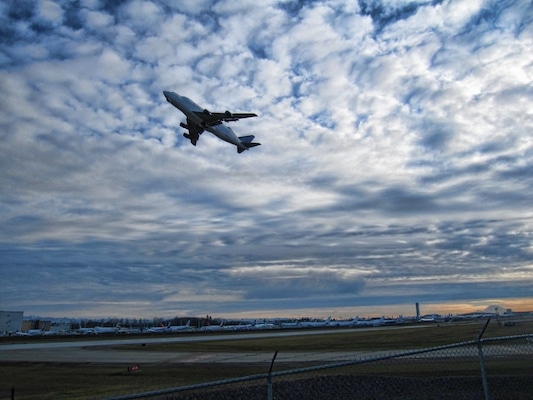 The Dreamlifter taking off at Paine Field

The tour ended and we were all bussed back to the Future of Flight Aviation Center and deposited in the gift shop. However this was just the beginning, the Aviation Center is full of history and interactive exhibits that will blow your mind and keep you entertained for a while. Thereâs even an observation deck on top where you can watch the Dreamlifter and other airplanes taking off to be tested. I spent the whole morning surrounded by Boeing planes and engineers; my father would have been super jealous!

As I took off the next day on my flight back to the Midwest, I experienced it with a whole new respect for the planes I have taken for granted. 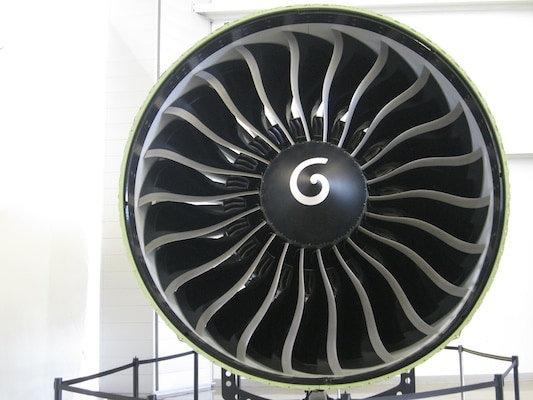 A jet engine on display at the Aviation Center

â¢ The site has 20,000 parking stalls
â¢ The massive manufacturing plant has no climate control. In the winter the machinery, body heat, and residual heat from lights keep it warm. In the summer, the doors are open to cool the building.
â¢ There are one million light bulbs in the ceiling.
â¢ Paint adds 600 to 1200 pounds of weight to a plane.
â¢ Up to 15 rail cars a day deliver parts to the factory.

Would I recommend it?

I thought it was a wonderful tour and would recommend it. You will learn an immense amount, but most importantly you will be in awe of the manufacturing process in general. If you are a manufacturing buff then this is a must see. Even if you simply like to fly and travel, this tour is a must see. It will make you look at flying differently.

Disclosure: Expedia (did you know they provided Expedia Activities?!) hosted my Boeing Factory Tour. However, all of the opinions expressed here are my own â as you know how I love to speak my mind!