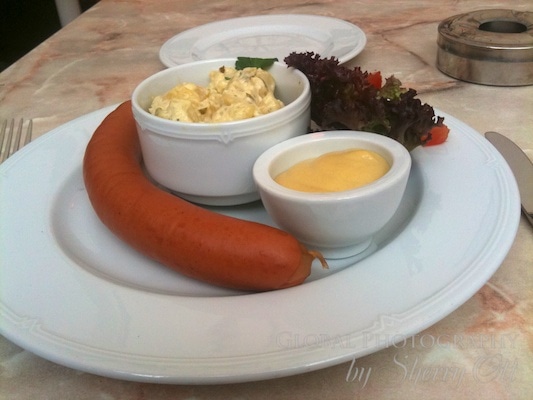 Put the words German and Food together and you think about hearty, heavy food â with visions of sausages, sauerkraut, potato dumplings, spaetzle, and cabbage dancing in your head – and sitting heavily in your stomach. Being my first trip to Germany this is exactly what I was expecting, however my first night in Berlin landed me in a Vietnamese restaurant eating Pho and spring rolls. Â  This is the first lesson Berlin taught me. The city is diverse, artistic, rough around the edges, and is certainly not predictable. If Berlin was a man I would marry him.

For me, food is one of the top things that defines a city’s culture â with transportation coming in a close second. The first thing I noticed while walking down the streets in Berlin is that food and drink is a very social experience in Berlin.Â  I guess that’s why they have beer ‘gardens’.Â  There were the number of outdoor cafes with rows of tables and chair lining the sidewalks with blankets invitingly draped over the chairs to welcome people even in the cool Spring weather (I’m being kind here – it was actually damn cold to be sitting outside – but a blanket would help!).Â  As I explored my neighborhood I saw Indian, Vietnamese, beer gardens, sushi, bratwurst stands, pizza, and kebab restaurants of all sizes and levels of sophistication. The diversity of the food reminded me a lot of NYC. I was excited to sink my teeth into Berlinâs food scene, and Karina from Oh-Berlin.com Blog was my guide. Hereâs a few of the places I went to which left an impression on me.

Zum Schusterjungen – Danziger StraÃe 9Â Â 10435 Berlin
Karina made sure that I got a taste of the standard fare. We went to Zum Schusterjungen, a small restaurant inÂ Prenzlauer Berg for potato dumplings red cabbage and sauerbraten (Sourbeef).Â  This was the hearty food Germany is made of – as if your German mother was in the kitchen cooking it up and you were outside sitting impatiently in your lederhosen ready to eat.Â  The restaurant was one of the busiest on the street and we were lucky to slip in before the rush.Â  The whole atmosphere sort of made me want to polka…but I refrained…this time. 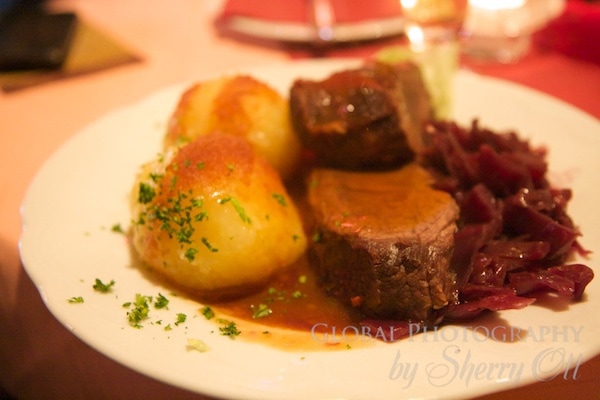 Curry66 – GrÃ¼nberger StraÃe 66, Friedrichshain, 10245 Berlin, Germany
Whatever you do, donât ask a Berliner how Currywurst originated unless you are ready to hear a long and passionate story about how Berlin is the originator of Currywurst and no other German city can produce it better. The concoction is attributed to Herta Heuwer in Berlin in 1949 after she obtained ketchup, Worcestershire sauce and curry powder from British soldiers and mixed it together to sell as a snack. I had heard a lot about Berlinâs currywurst and honestly had no idea what it even was, but I was up for trying it.
Currywurst is simply a sausage (wurst) served with a red sauce made of ketchup and curry â and maybe a few other secrets ingredients. Itâs sort of like cheap street food, something to be enjoyed quickly â like a hot dog in NYC. Karina took me to her favorite Currywurst restaurant â Curry66 – where the two men behind the counter gave the place itâs personality. Two big guys with bellies made of currywurst and a love for American music. There was singing, laughing, and plenty of spicy sauce to ensure you have a good time. The even convinced me to try the spiciest curry sauce which left my tongue numb and tears streaming down my face. 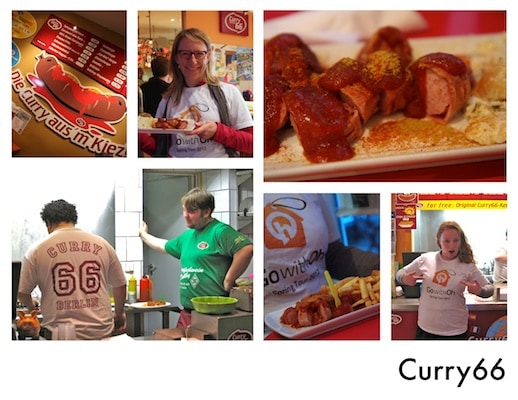 Factory Girl Tasting Lab – – Simon-Dach-Str. 10, Friedrichshain, 10245 Berlin
In the graffiti filled, hip neighborhood ofÂ Friedrichshain exists a strange new dessert that defies words. Karina kept on describing it to me as a place that serves just the frosting to a cupcake.Â  Factory Girl calls it Magnolia and describes it as a pudding like dessert.Â  Of course the word “dessert” was enough to intrigue my sweet tooth and we stopped to try a sampling of Magnolia and wash it down with Berlin’s best lemonade (as voted by…ummm…someone).Â  The Magnolia was a wonderful mix of frosting/cream/pudding and it was delicious! It was served on a simple rectangular slab with a spoon and you can try a variety of flavors sort of like ice cream – ones with fruit, chocolate, andÂ  coffee. 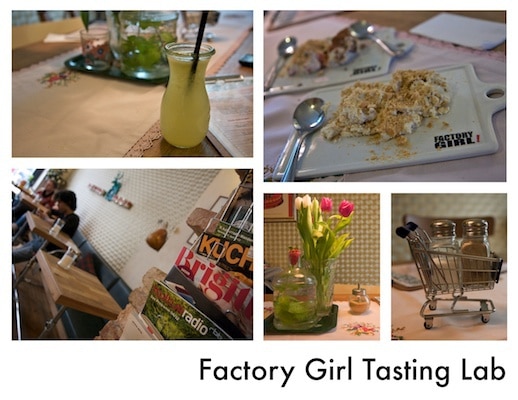 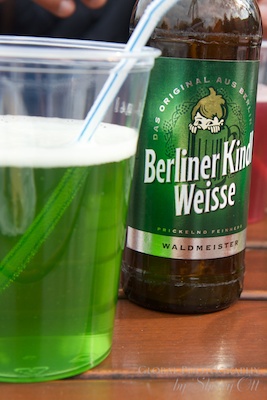 Perfect for St. Patty's day...but in Berlin they drink it year around

Mixed Beer â found all over Berlin
While strolling along the river we stopped for a bratwurst and beer. The bratwurst was exactly how I expected it, however the beer wasnât. Karina brought me a Berliner Wiesse â a colorful, light, fruity tasting beer that seemed a bit like a wine cooler. This is when I learned that Berliners have some odd habits when it comes to beer â they as well as the rest of Germany drink beer mixes â theyâll pretty much mix anything with beer. I saw and tried various mixes with coke, lemonade, banana juice, and mineral water. However when I mentioned to a native German that I used to drink tomato juice and beer in college, they thought THAT sounded absurd.

One of my big surprises was the amount of ethnic restaurants Berlin had to offer. All of my various food cravings could be satisfied â which in my opinion is quite rare in European cities. The two big cultures represented were Turkish and Vietnamese. I thought this odd at first, however I was told that when Berlin was divided, the Turks came pouring into Western Germany for work, and relocating their families and culture in the process. While in East Germany the Vietnamese were welcomed for low wage jobs since it was another communist country and if you lived in one of those countries, there were only a limited number of other countries you would relocate to within the communist block. Now the edges of east and west are blurred and so is the cuisine. Youâll find Turkish kebob stands and Vietnamese restaurants throughout Berlin. I even found some great Turkish food at the Sunday Nowkoelln flea market. 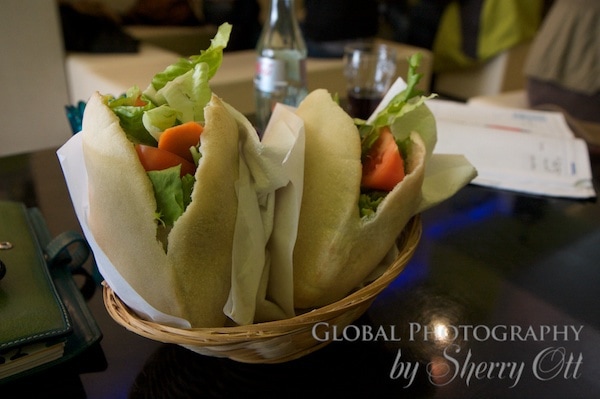 However, not to be outdone, there are plenty of Indian restaurants in Berlin too. My favorite was a weird sort of Indian fusion called Derimbiss – Kastanienalle 49, 10119 Berlin
This was also in my apartment neighborhood (Prenzlauer Berg). Â  It seemed to be a melting pot of ideas, personalities, and mixes of food all with a bit of an Indian twist. They served Naan pizza which was divine – and also a complete Thali menu if you are really hungry!

I highly recommend trying out one of the food tours in Berlin to get a feel for the different neighborhoods and what they offer. Plus, if you take a food tour early in your stay, then youâll walk away with lots of great new places to try for the remainder of your stay. I went on a tour of SchÃ¶neberg neighborhood with Eat the World Food Tours. We learned about the neighborhood and history in addition to trying a variety of different ethnic and traditional German food. The tour lasted 4 hours and my guide provided a âguideâ in English and German which described each restaurant and the location on a map so you could go back during your stay.Â Â  The tour was mainly conducted in German, but she would translate in English.Â  However – if you are looking for traditional German food tastings, this probably isn’t the tour for you as much or it was about the diversity of the Berlin eating scene.
Eat the World Food Tour photography

Or check out the recent list of hot cafe’s Oh-Berlin reviewedÂ  – and make sure you come to Berlin hungry!

Disclosure: Thanks to Oh Berlin apartment rental and Go with Oh for hosting me on this eating extravaganza.Â  However, all of the opinions expressed here are my own â as you know how I love to speak my mind!