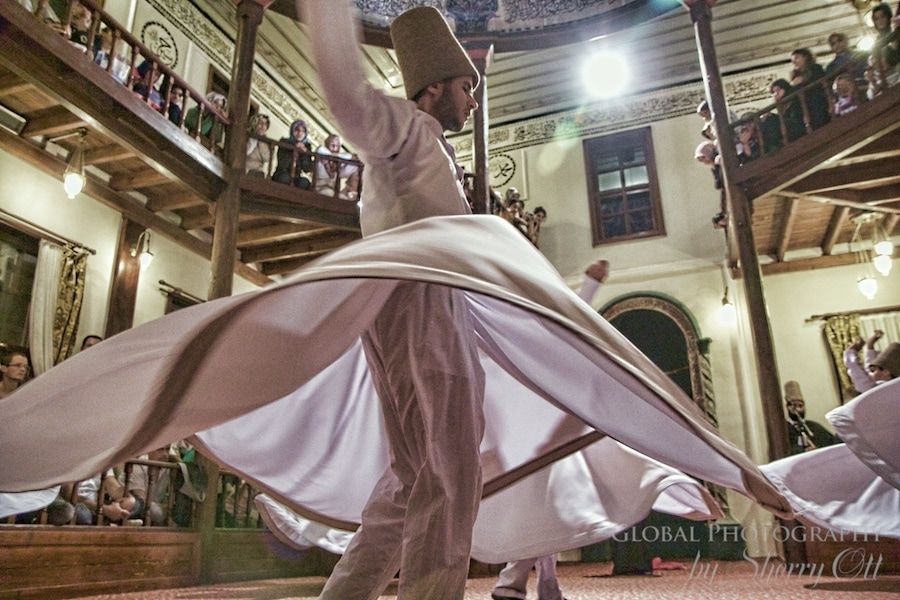 Getting a different perspective on the whirling dervishes

We arrived at theÂ Dervish Lodge of Karabash-i Veli and I was full of anticipation. Intrepid Travel had arranged for us to see a very local experience of Turkeyâs whirling dervish culture. I was busy trying to arrange my scarf over my head in order to be in compliance with the cultural norms for this religious ceremony. Our guide started to explain the evening ceremonies and what we should expect and thatâs when I heard him say it.

âThe women will have to sit upstairs and the men will sit downstairs.â

My bubble of elation quickly deflated. I had visions of taking photos at ground level of the spinning and hadnât even considered the fact that this was a religious ceremony that would bring into play the gender differences present in Muslim religion. 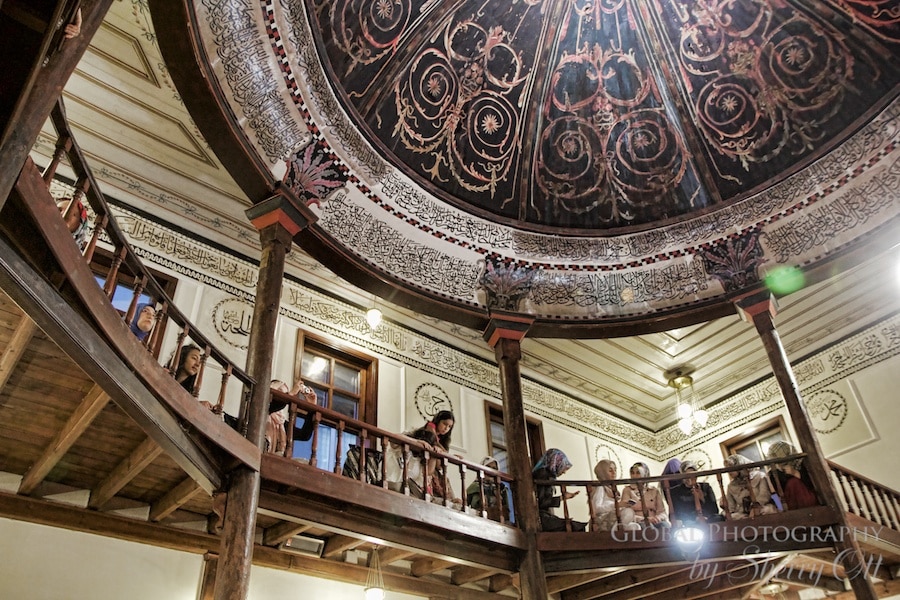 Women sit above and watch dancing from a different perspective

Many of the Whirling Dervish ceremonies you can attend around Turkey are put on specifically for tourists and even though they are still a religious ceremony and meditation, the religious side of it takes a back seat to the âshowâ aspect of it for tourismâs sake. This gender rule I was being confronted with was a good reminder that I was not at the tourist performance.

What is a Whirling Dervish?

Whirling or spinning is essentially a physically active meditation which originated among Sufis, and which is still practiced by the Sufi Dervishes of the Mevlevi order according to Wikipedia. It is a customary dance performed within the worship ceremony, through which dervishes aim to reach the source of all perfection, or kemal. This is sought through abandoning one’s egos or personal desires, by listening to the music, focusing on God, and spinning one’s body in repetitive circles, which has been seen as a symbolic imitation of planets in the Solar System orbiting the sun.

I approached Yenner, our guide, and asked if there was any way I could take photos at ground level or at least take a few photos at ground level and then go upstairs with the women. He at first said no, but then he must have seen the disappointment in my eyes and put up his finger and said wait here and walked off. He chatted with an older man drinking tea and soon came back to me and said â itâs ok, you can sit downstairs. Sometimes having a blog and a big camera has its advantages.

As all of the women filed in and went up the stairs I tightened my scarf around my head and tried to sit inconspicuously in the entrance on the ground floor. No one seemed to mind my presence there and I really thought that I would just take a few photos and then go upstairs where I belonged. 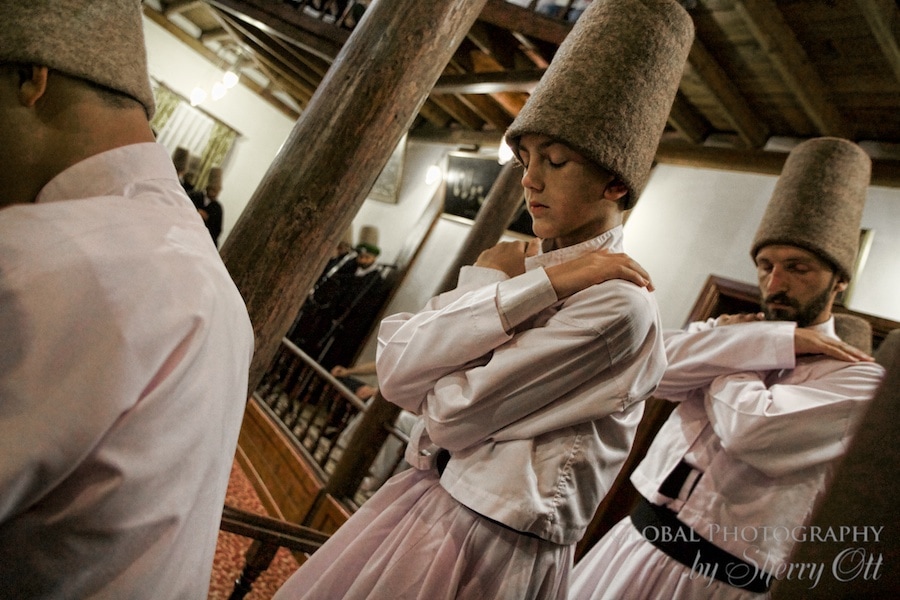 However, as the ceremony started I was mesmerized by the dervishesâ (made up of men and boys) concentration, and technique. This was not just a dance – it was a spiritual ceremony of motion in which they clearly were operating at a different level than all of us watching.

The head of the Dervish Lodge and Cultural Center provided me with more explanation about the ceremony which was crucial for me to understand further what all of this spinning was about. The ceremony began with the dervishes walking in with their arms crossed about them which represents the number one, and testifies to Godâs unity. There is a short eulogy and then music begins. The dervishes begin by greeting each other and walking in a circle around the room 3 times and suddenly the whirling begins.

Whirling Is a Spiritual Balance

I felt a rush of air as my scarf was nearly blown off from the wind that was created from the whirling of the heavy dervish skirts. Their arms, now unfolded, were slowly and perpetually performing one of the four salutes to God during the entire ceremony.

I was able to concentrate on their feet and see how they used one leg as a solid balance while the other pivoted around it.

Watch my YouTube Video of what goes on underneath the skirt!

Then after about 40 minutes the twirling wind on my face suddenly stopped. And there they all stood with their arms wrapped tightly against their body again in their unity position. I watched each of them stand solid as a rock, no dizziness, no swaying, nothing. I was shocked. I could see the beads of sweat drip off their faces reminding me that even though it looked like fluid easy movement – it wasnât.â it was work.

I had stayed the entire time downstairs mesmerized by the movement, the wind, and taking photos. 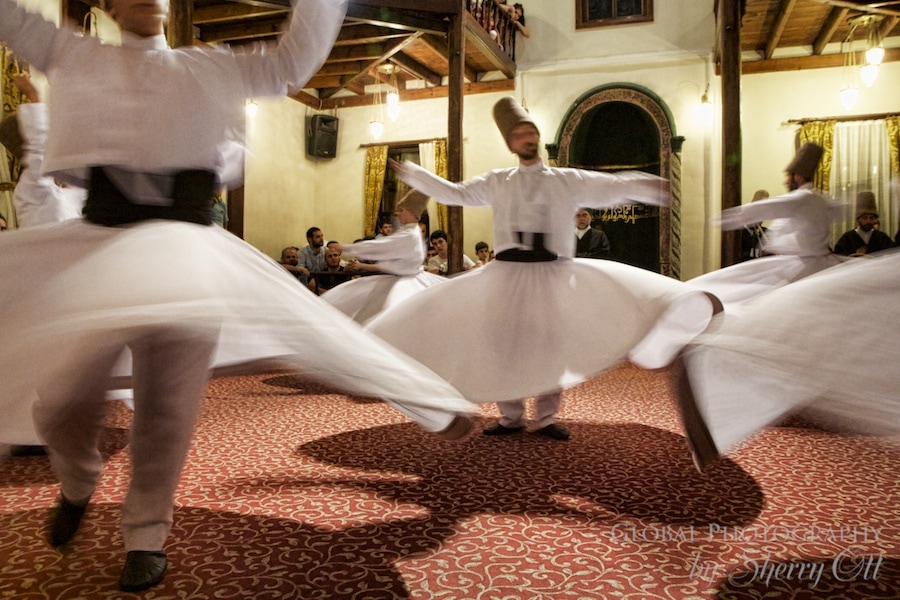 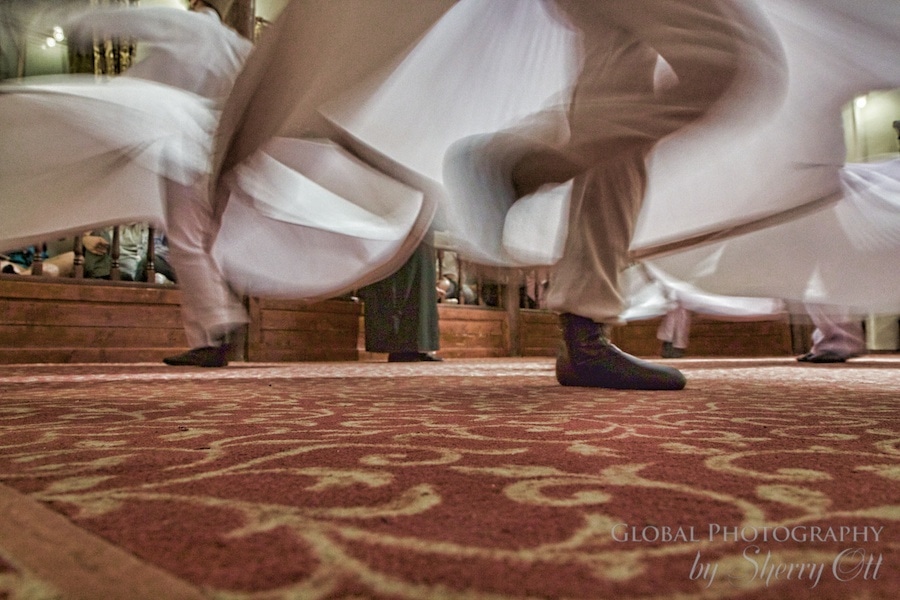 The footwork under the whirling dervish skirt 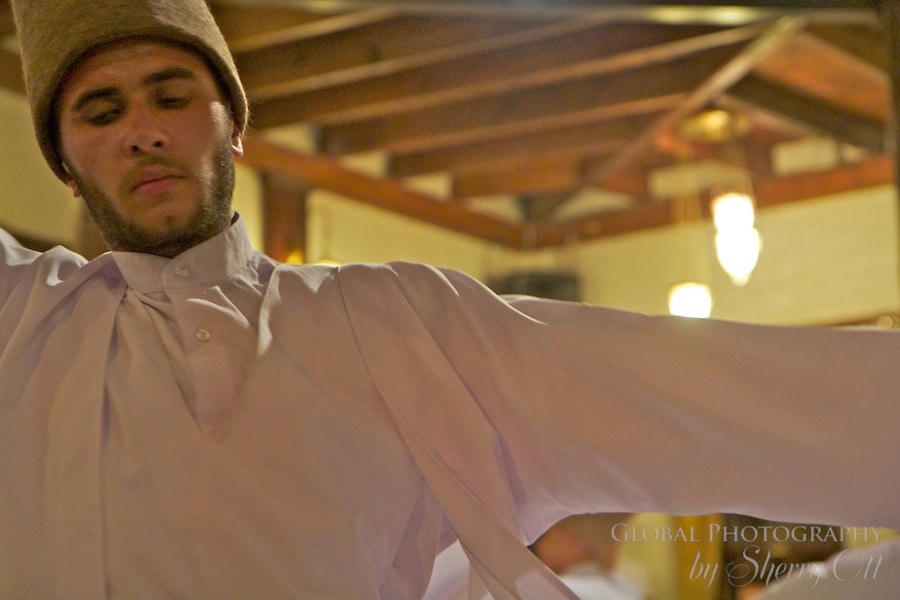 A whirling dervish in a meditative state 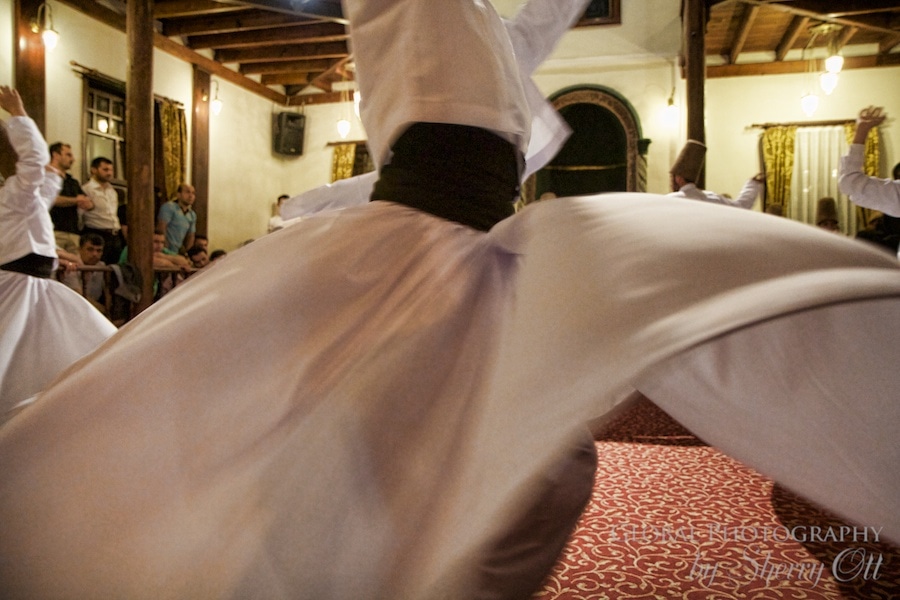 A skirt whirls by me on the floor 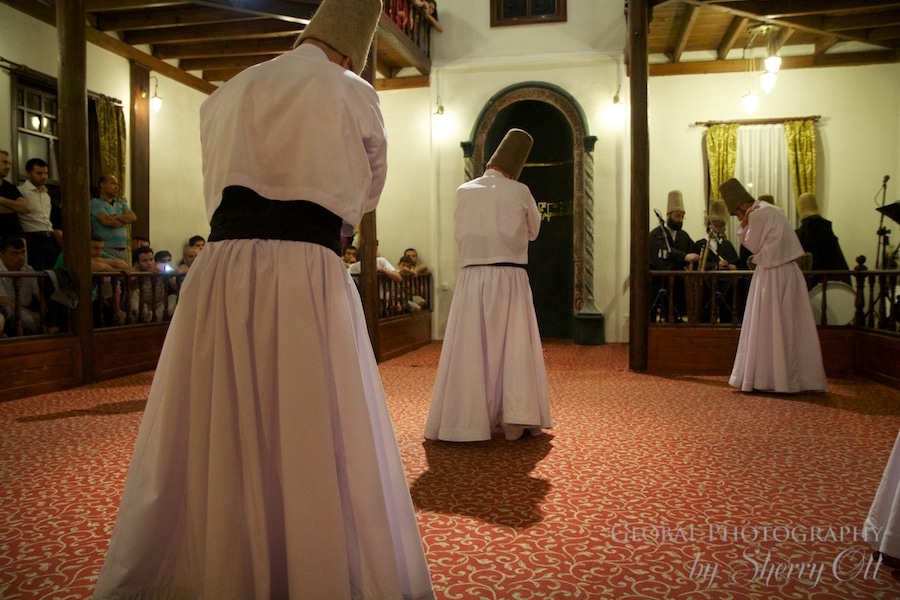 The ceremony concluded with a reading from the Quran,

âUnto God belong the East and the West, and whither over ye turn, you are faced with Him. He is all-embracing, all-knowing.â

A beautiful thought in any religion.

Disclosure: As I traveled through Turkey I was a guest of Intrepid Travel – however all of the opinions expressed here are my own.

13 Responses to "Whirling in Religion"