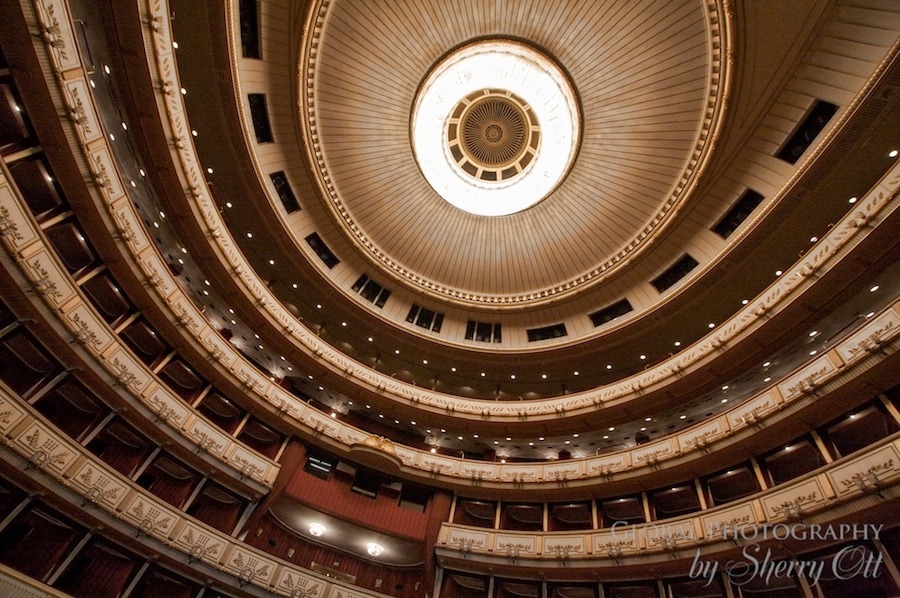 The layers of seat in the Vienna Opera House

Some people drink a Diet Coke a day, or have a daily piece of chocolate, or a daily route they take to work – daily routines can be a good thing.Â  Even the Vienna State Opera House has a routine – they put on a production every day – yes, every day.Â  It’s like a factory pumping out musical culture at an alarming rate.Â  To make it even more unbelievable, the don’t put on the same shows every night – they frequently change from night to night.Â  And are you ready for the final ‘blow your mind’ piece of information – they aren’t always putting on operas, sometimes it’s ballets.Â  Can you imagine how big a stage has to be to deal with a production schedule with this kind of variety?

Well, I couldn’t either – so I had to go see it for myself.Â  I took the one hour English tour one afternoon which allows you to see the inner workings of the Opera House, arguably the busiest opera house in the world,Â  in addition to getting all of the facts and trivia that your mind can handle.Â  We were able to go onstage and watch as crews changed out sets for the performance that evening.Â  The complete stage was bigger than the overall seating area which holds 2,200 people.Â  It felt as if I were standing in an airplane hangar.Â  Each day the crew doesn’t get to the work on the stage until after the daily rehearsal is over at 2PM.Â  From 2PM to curtain call that night the crew is busy changing out sets.Â  I could have simply stood around and watched the crew set up and been entertained for an hour – but there was much more to see in this massive structure.

From intermission rooms, to private seating, to the grand lobby – we saw it all.Â  And now you can too!

If you are interested in purchasing any of these photos, simply click on the image for more information. 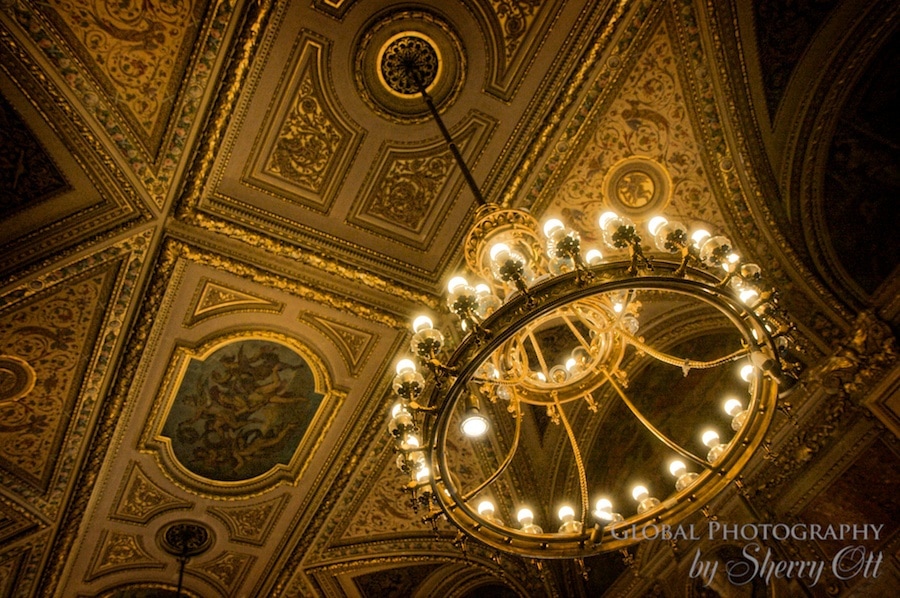 Lighting in the grand entrance 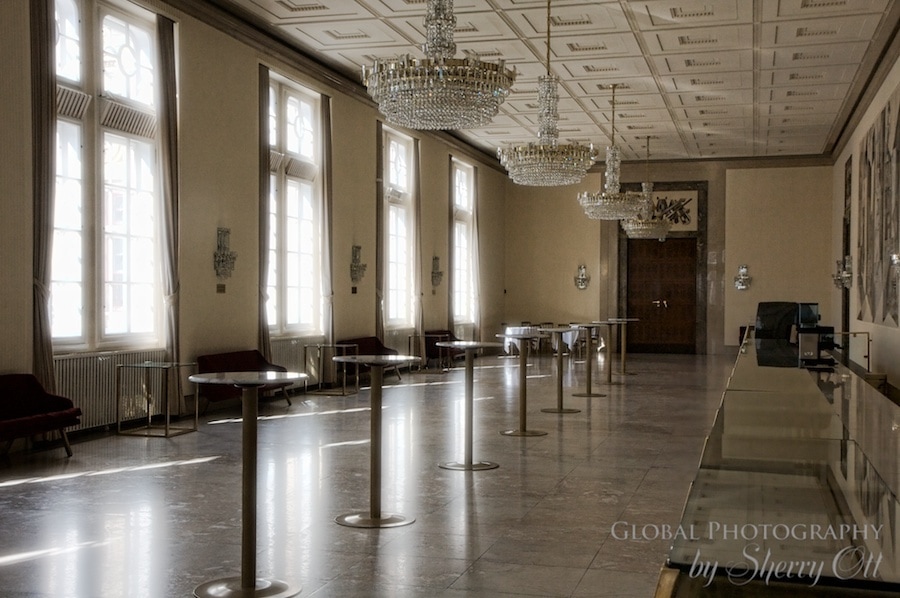 One of the intermission rooms 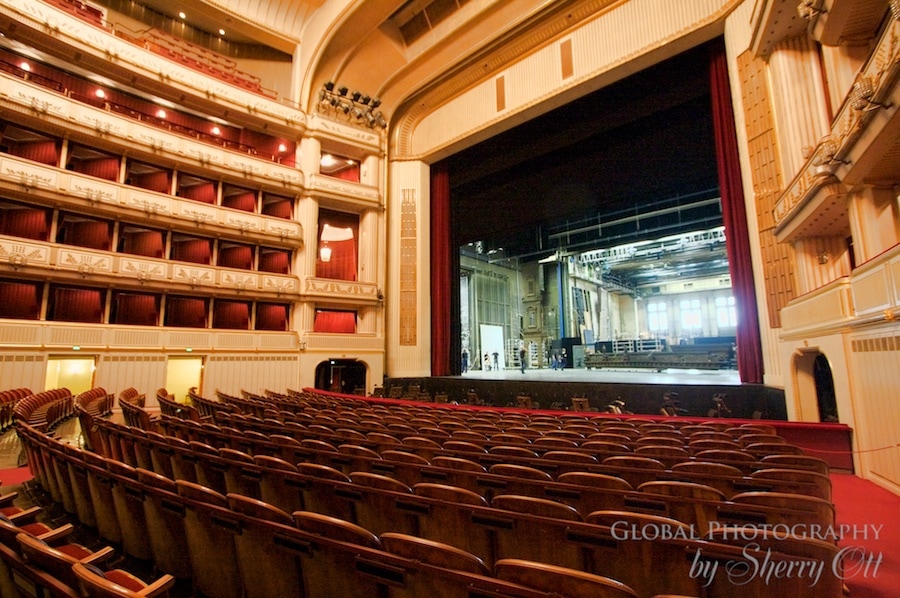 Seating and the open stage - see how far back it goes! 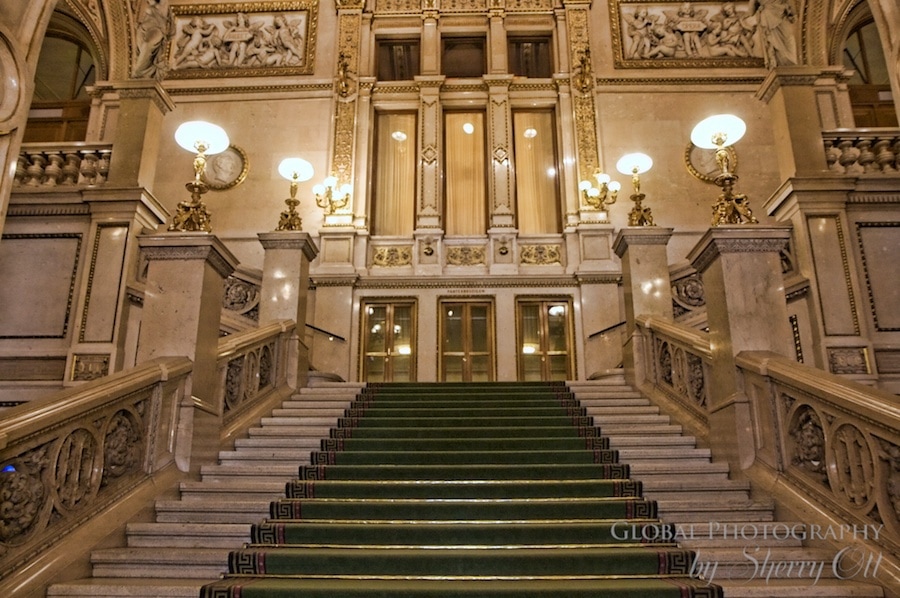 The grand staircase in the entrance 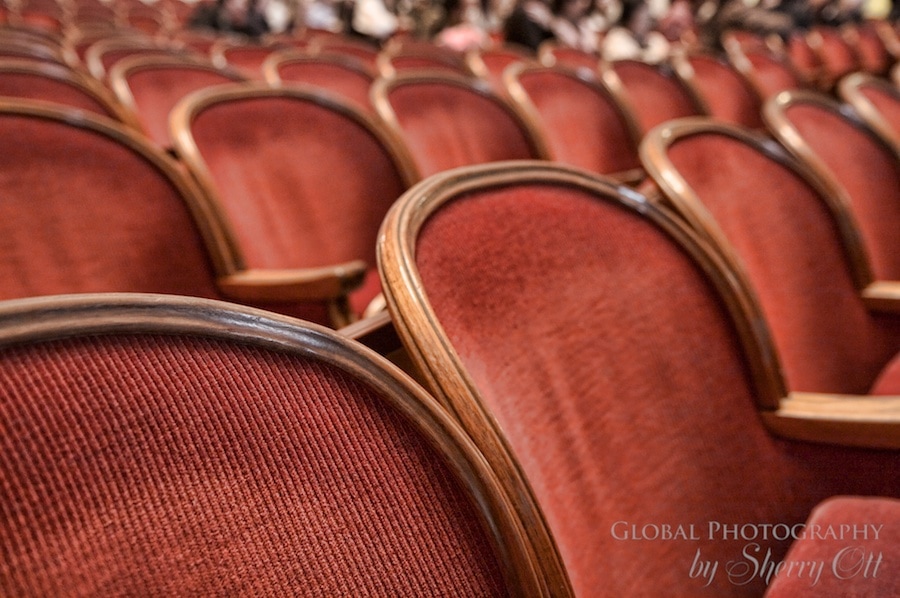 Seating for the show 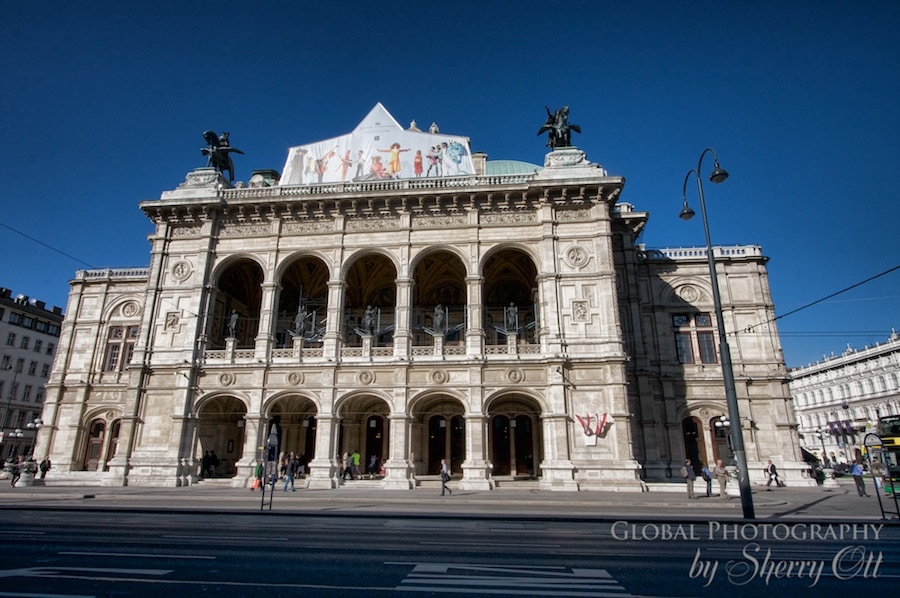 The outside seems somewhat plain as compared to the inside 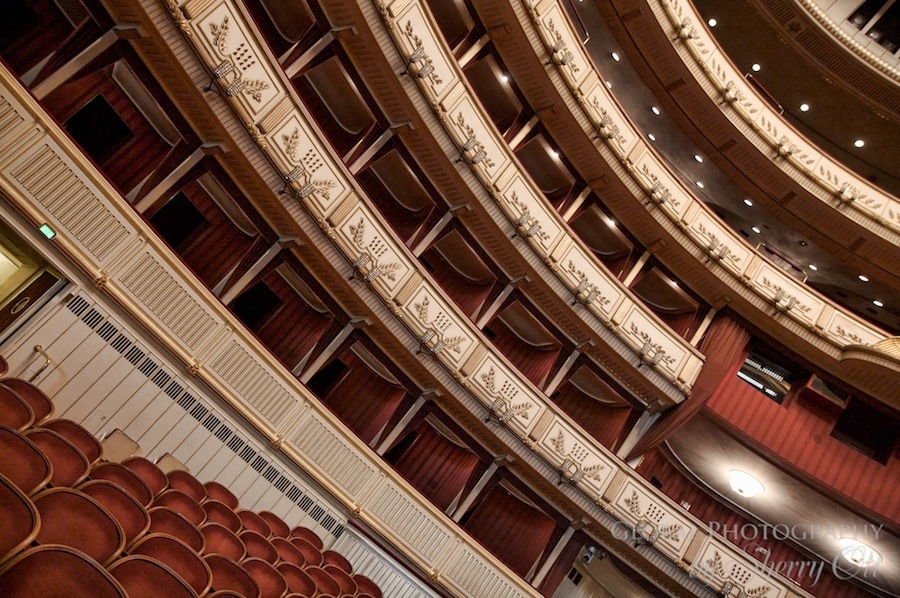 Levels of seating stacked to the rafters! 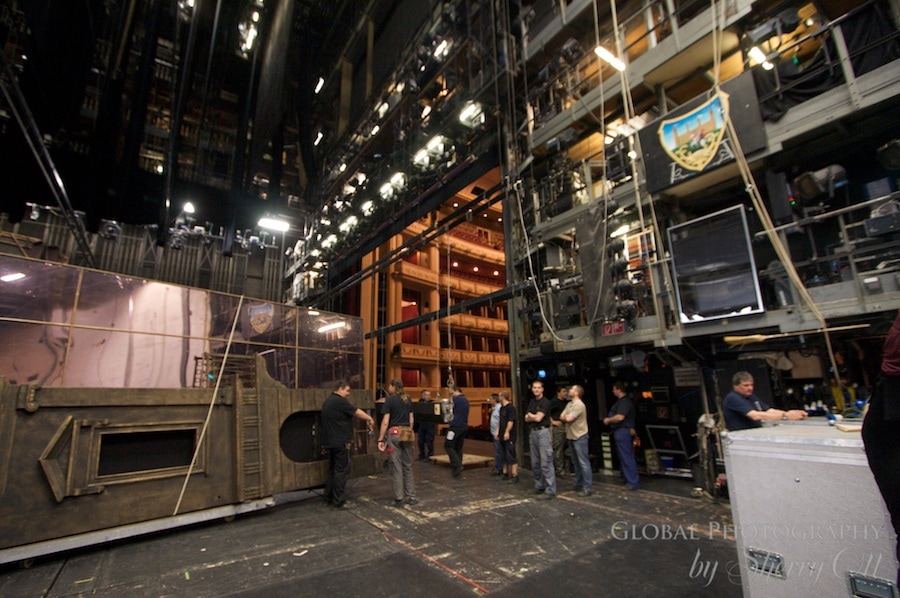 Back stage with the crew setting up for the night's performance 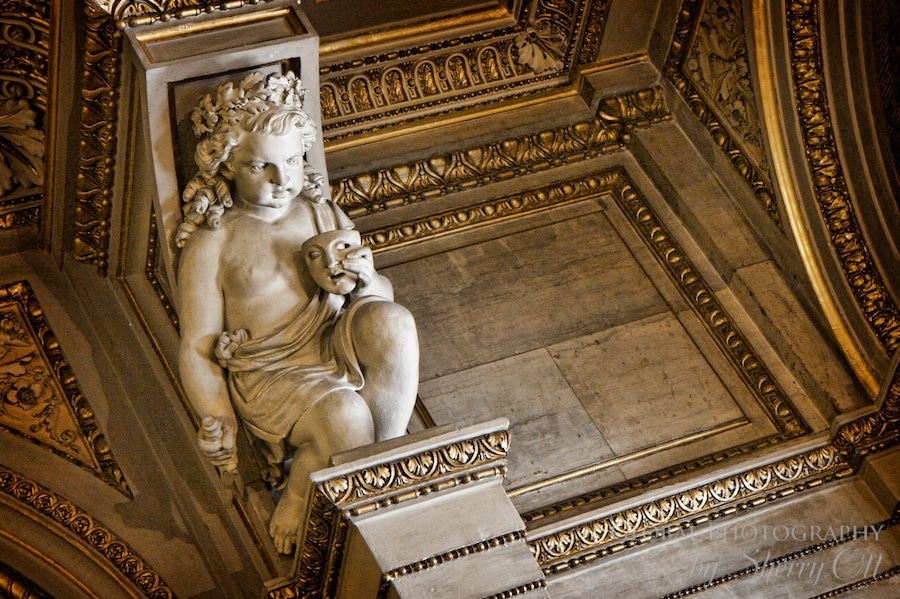 Detailing inside the lobby 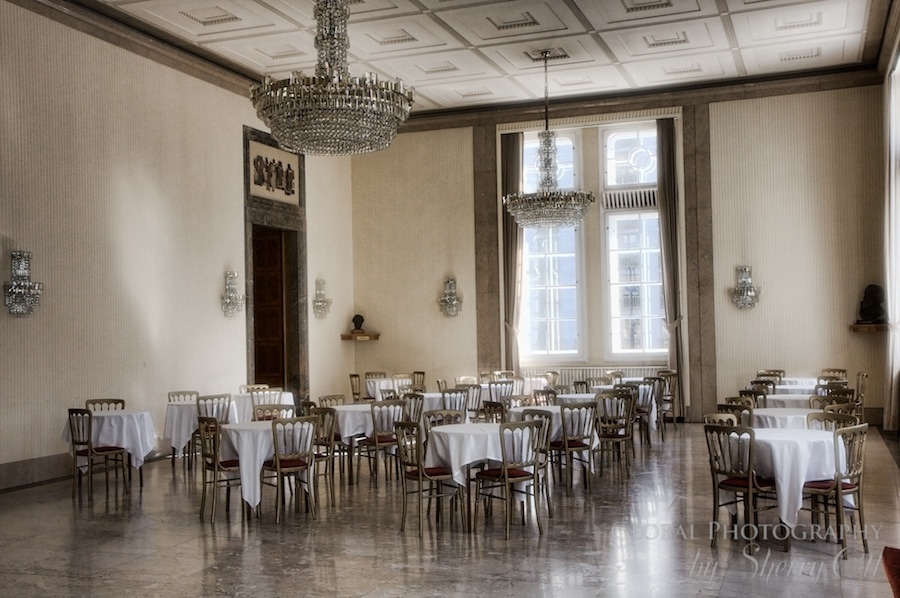 Cheap ways to see the opera performance:
Standing Room tickets for 4Euros sold the day of the show
In the summer months the opera is broadcast live in the square, so just sit out side of the opera and see the show under the stars!