Warning – these pictures are not for the faint of heart! If you have any aversion to needles or piercings – then move on to my Orchid post instead. The Orchids are completely zen. A special note to my high school friend, Audra…considering you fainted when you got your ears pierced in high school, I think you would much prefer the Orchids! Read on at your own risk!! 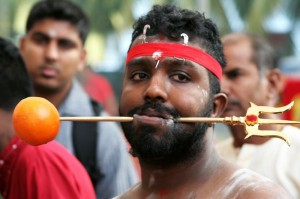 This week I attended a unique religious festival in Singapore. This festival only occurs a handful of places in the world, and luckily Singapore is one of them! I was so excited to go see this event, as I had seen footage of it on Globetrekker (my favorite tv show and dream job) in the past and have always been fascinated by it. When Cyndi told me that she got us tour tickets to go view it – I was ecstatic! I even treated my camera to a professional cleaning with the Cannon Service Center in Singapore in order to get the best possible shots!

Thaipusam is an ancient religious festival of great significance to Tamil speaking Hindus. This version of Hinduism is one of the oldest religions going back 5000 years! The word “Thai” refers to the Tamil month of Thai (Jan – Feb) during which the festival is observed. “Pusam” refers to the star of nakshatra. The festival falls on the day when Pusam star is descendant, generally coinciding with the full moon day of the month. Now, I could go on and on about the history and stories of Thaipusam, but you can just as easily read that on wikipedia. Instead, I will give you my brief cliff notes based on my understanding of the festival. I can’t guarantee that all of my facts are checked, but it’s how I saw it, through my eyes and my lens. I know that most of you who read my blog would rather just get the cliff notes on it than read all the facts…so here goes…

The festival is basically a pilgrimage from one temple to another. They carry offerings to the destination temple to give to the Gods as an act of penance and provide an offering to the God, Murukan. To Hindus, Murukan is the personification of wisdom.

The offerings they carry with them are in the form of milk pots, dozens of various fruits, Kavatis, and Chariots. The milk pots range in size, and the large ones (the size of a gallon of milk) are normally carried by women on top of their head. Men also carry numerous tiny pots of milk and various fruits. When the festival originated, milk and fruit were considered precious commodities, so it was quite a sacrifice to give offerings of milk and fruit to Murukan. The Kavatis are large structures that resemble a tower of sorts, they normally contain peacock feathers and other god-like images attached to them. Â The Kavatis can weigh around 30 to 40 kg.

Finally, the chariots have various gods on them and resemble a parade float of sorts and probably weigh about 60kg. The distanced between the temples can be any amount of distance – in Singapore it was about 5k. For you runners out there…you are probably thinking…”5k, that’s not so bad. I carry Gu, and water bottles with me all the time and run 10 miles.” Oh yeah…one more thing I forgot to mention – the offerings these people are ‘carrying;’ are pierced to their body. All of a sudden a simple little 10 mile run in the park is sounding pretty good right now!

We started the tour by going to the first temple to watch the families prepare their offerings. Each family unit normally carries their offerings as a group. Women do not get any piercings, they simply carry the heavy milk pots. The family unit normally pick a younger member of the family (maybe in their 20’s or early 30’s) to carry the heaviest offerings (the Kavati). Most every family has someone carrying a Kavati, however not all families pull a chariot. However, there are some uber-faithful families that have the chosen male carry both a Kavati and a chariot.

The ‘chosen’ male also normally has been fasting for the last 5 to 8 days – so I have to think that they really aren’t in a sane state of mind at this point (which is probably good). The family gathers around as a holy man from the temple conducts the piercings. The family loudly chants to gods as the ‘carrier’ is being pierced. I can only think that this is to distract the man from the pain in some way. The fact that they are hanging oranges off of a starving man is enough of a distraction in my opinion. I personally think that I wouldn’t notice them piercing my skin, but instead I would be focused on that orange and ripping it open and eating it!

They attach the Kavati to the person by piercing a number of metal rods into the torso skin to hold it in place. In recent times, many of the men wear waist belts in order to carry the the weight of the kavati on the waist instead of on the piercings. Photo: Man with kavati and no waist belt

However there are some old-schoolers out there that like to do it the traditional way…no waist belt and carry the whole weight through the body piercings on the waist/stomach. Often while the chosen male is having the piercings conducted amongst the chanting, he is also standing on wooden shoes/thongs of sorts…the shoes are made of nails….nothing is ever easy for this guy…really.

See, you think that you are having a bad day…just consider that you could be starving, standing on a bed of nails, and getting your body pierced in a hundred different places – your day is looking pretty good now! Some of the men even decide to walk the 5k while wearing the shoes of nails – needless to say, they kept a slow pace.

Finally, most of the chosen men also had a large piercing done through their mouth, forehead, and tongue. The piercing rods ranged from a small diameter like a fork tong, to a large diameter the size of my finger. To top it all off, they would then hang an orange or a lime off one end of the mouth piercing for extra weight. All of this self infliction of more ‘pain’ was to show their dedication to Murukan. The families often thought that the more they could burden themselves, the more devoted they were. They even went to the lengths of having family members pull against the chariot creating more weight for the chosen male to pull.

However, there is a light at the end of this painful tunnel. The religion has stepped in and has frowned upon the excessive acts of piercing and self inflicted pain – therefore banning some of these things. However, like any good rule out there, there are always ways around it and there are always people breaking them.

Are these people in pain?

Is there blood everywhere?

Why in the world would they do this to themselves?

It certainly appears that the men are not really in much pain. They are said to be in a semi trance state so they don’t feel it. I honestly think that the fact that they have been fasting for 8 days plays a big role in this whole piercing business. They are probably already hovering between reality and trance due to lack of food. Then you have family members chanting in your ears, therefore making you even more delusional. Finally, the fact that they have been fasting means that they have lost weight – their skin is already hanging loser than normal, therefore the lose skin is being pierced, which may be less painful. There is no (or very little) blood that we saw. The people doing the piercing do know that they are doing, they find the right pieces of lose skin and pinch them and pierce the hook through the skin, they stay clear of any veins – they are professionals!

However, I will admit that I never did see any sterilization of the hooks being conducted, so that was a bit disturbing, but no one really seemed to care. As to why they do this…my only answer is why not? Â Every religion has their odd beliefs, and customs, who are we to judge a 5000 year old religion. Everyone was there of their own will, and honestly seemed to be enjoying themselves. I was quite honored that they let us mull around and shoot pictures like the paparazzi….they were very open to letting us view everything.

During the 5k pilgrimage, the whole family would walk together and support the chosen male by singing and chanting. There were certain points along the route that would pass other temples and they would then all stop and dance there for a while and then move on. Kind of like the Macy’s Thanksgiving Day parade when the groups perform at the entrance to Macy’s for national television. Hmmm – come to think of it, maybe next year instead of people simply carrying the balloons down the street, maybe they should pierce them to their torso…just hope that it’s not a windy day!! I digress…

At the end of the pilgrimage they gave their offerings at the temple and there was much more dancing and rejoicing, and sometimes screaming and fainting. At one point we heard loud shrieking screams and it was a lady that was having an averse reaction to giving up her milk pot. A few minutes later, 3 other women were carrying out this teenage girl limp and unconscious – she must have fainted. Don’t worry, she came to shortly thereafter.

Bells worn around the ankles

After giving their offerings, the families were ushered into another large tented area where they could celebrate and remove all of the piercings and EAT! I thought that the removing of the piercings was harder to watch than the piercings themselves. Once again, this was a family process. The women normally prepared some food, or handed out food to people, and the eldest member of the family removed the piercings from the chosen man. As soon as a piercing was removed, the elder would put white powder on the open ‘wound’ – this seemed to stop the blood in some way.

We later found out that the white powder was actually burned cow dung…it was basically ashes of cow shit. I’m not really sure how sterile that is, or how good it tastes when put in the open wound in the mouth…but it seemed to do the trick. The Kavadi was slowly broken down and put away in a special little carrier to be ready for next year. The chosen men were often congratulated with hugs and hand shakes from the family and they seemed to be euphoric…I can only compare this to finishing a marathon I guess… happy that it was over!
Video: Removing piercings

The whole experience was eye opening, and hopefully the pictures and video help you visualize all of this, as it was really a one of a kind experience to be there in person. The festival/parade goes on for 24 hours, and thousands of families participate. I could have stayed all day and watched and took pictures…I think most of the time I was simply wide-eyed in awe. It certainly gives me something to think about next time I’m on a run and feeling crappy, like I can’t go on. I will simply think about the guy that I saw with 2 coconuts hanging off of his back onto his butt-cheeks. Many days when I run I feel like I’m carrying a couple of coconuts with me on my ass…but this guy really did it…he was my hero!!