Beyond the Mountain – Zanzibar 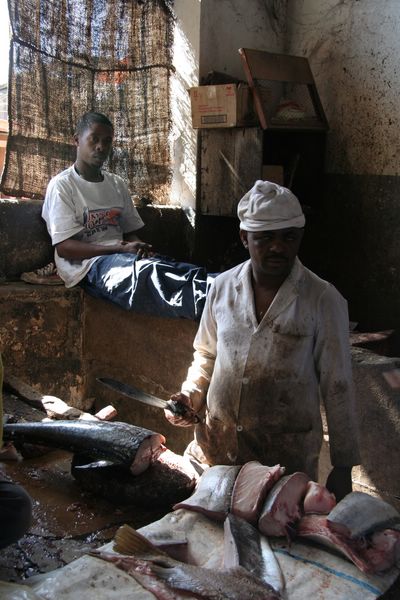 Tanzania was similar to Kenya in many ways – people were still walking everywhere, agriculture was the main ‘industry’, tribal life was the norm and the heavy meat diet was the staple. However, Tanzania had some additional issues around electricity. When we arrived in Tanzania, we were told that the electricity would come on at 7PM – until then we were SOL.

Apparently the whole country didn’t have electricity as there was some problem with the abundance of water for energy. I’m not sure what it was all about, but it was rather disturbing that a whole country didn’t have power. The hotels and businesses had generators they used during the day and everyone seemed very unphased with the situation. I could wait until evening to take a shower with hot water…I could adapt. However, once we came down the mountain it was now Ramadan – and due to the large Muslim population the Tanzanian government made an exception during Ramadan and allowed electricity all day since most Muslims stayed inside during the day during October. So – things were back to normal…electricity for all!

Cyndi and I flew out of Kilimanjaro airport directly to Zanzibar – the Spice Island. What a change to go from rugged mountain life to island life in the matter of an hour. In addition, we had the additional learning curve around the Ramadan holiday. Zanzibar has an extremely mixed religious culture due to its place in history as a main port on the Indian trade routes. There is a mix of Christian, Hindu, and Muslim religions. The predominant is Muslim, so this was my chance to learn more about it.

Hammer-head shark at the market

We arrived in sunny Zanzibar surrounded by the turquoise waters of the Indian Ocean. The main city on the island is Stone Town and it is full of history. We quickly got settled in our hotel and took a tour of the city. The streets were narrow – no cars – just scooters, bikes, and the ever present walkers. We learned about the various Sultans who ruled the island as well as the slave trade of which Zanzibar was a hub. Slaves would be abducted from villages and brought to Zanzibar to be sold at auction. These slaves were not going to the US – but to India, Brittan, Middle East, etc. We walked all over the town and unfortunately we hadn’t had any lunch yet. During Ramadan it is considered extremely rude to eat in public as they are fasting all day – so herein lied the problem. Many of you who know me well have felt the wrath of my mood swing when I don’t eat – be happy you weren’t with me!! I had a Cliff bar in my pocket – but I couldn’t take it out to eat it so I suffered along all day as food was in my pocket!

We went to the market area and I was astonished once again by the variety of produce, an infinite variety of bananas, green oranges, and tons of different varieties of rice. However – my favorite stop was the fish market/auction. We were walking in and our guide – Mr. Mohammad – was telling us that just recently women were allowed to sell at the fish market when this guy literally drags a huge hammerhead shark past us and puts it in the auction area. It’s quite stunning when you see someone dragging a shark down the street and definitely a first for me!

Mr. Mohammad took us to museums, churches, everywhere – we were exhausted! Finally he showed us a great ‘sundowner’ place (a.k.a happy hour for sunset) and finally we were allowed to eat…and drink of course! 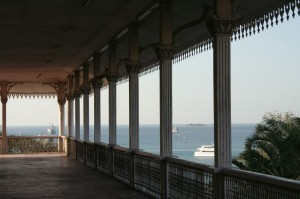 We watched the sun set on the Indian Ocean – a busy day! Since we were still fresh off the mountain – we continued to marvel on how wonderful it was to sleep in a bed and get up to go to the bathroom in the middle of the night! I think we would get up and pee in the middle of the night just because we could! The next day we went to a Spice Plantation north of Stone Town. Prior to this – I had no idea where many of these spices came from – so it was really educational. So many of the spices we know grow on their trees, and shrubs on the island. It makes you wonder how did the US get such boring trees like the elm or the oak – what do they produce besides some nuts and a nice looking leaf? Every plant or tree had some useful purpose on Zanzibar.

Photo – Nutmeg at the plantation

Next we visited a local village and had lunch prepared by the local women. We sat on mats on the floor without shoes and ate lunch full of the spices we had just learned about. We visited a Sultan bathhouse (including the ever popular long drop toilet), we then went to a secluded beach to nap and back into Stone Town before sundown – ahhhh – I love this new life of mine! As we drove around the island – I was completely intent on watching the world outside the van window – it was far better than any reality TV show that I’ve ever seen. We saw so many little mud houses and so many kids! They were always excited to see the white people and would often come running after the van waving. Seeing how people lived amazed me – it’s such a far cry from what we are used to.

At our hotel (Clove Hotel) we talked to the owner, Lissette, and she informed us to not go outside from 6:30 to 8:00PM as that was sundown and all of the Muslims would close their shops and go in and eat and pray. She told us that the only people that would be outside at that time were the tourists and the thieves. I wasn’t about to go against her advice so we sat up on the hotel balcony as we watched everyone on the streets go inside and soon you could hear the familiar chants/prayers ringing through the city. It was really enchanting and you wondered as you drank a beer on the balcony – “why can’t we just all get along?” Once our ‘curfew’ was over we went out at 8:00 and had dinner at a restaurant called Monsoon that required you to have no shoes for service…and they made you sit on cushions on the floor – a typical type of way to have dinner in that part of the country.

The next day Cyndi shopped and I made friends with the local boys on the streets who were budding young salesmen. I think they knew how to say “beautiful lady”, “My friend”, and “special deal” in about 10 different languages! One of them proposed marriage to me – he was probably 18 years old at best and he openly was looking for a white wife as “all white people are rich”. He was disappointed that I didn’t want to have any kids – so he was trying his best to talk me into having just one. I told them that kids were too expensive – he said – yes – but they are small and don’t take up much room. He obviously didn’t know who he was dealing with! All this time Cyndi kept bargaining for handicrafts – she was working hard at a good deal. I passed on the young boy’s marriage offer and that afternoon we sadly left Zanzibar. I guess if I’m ever really shopping for a husband – I know where I’ll go to find one.

We took a 2 1/2 hour ferry to Dar es Salaam. We lugged all of our stuff onto the boat and Cyndi was the smart one who took a Dramamine. I figured that I had been on many ferries like this one before without getting sick – no problem. About an hour into the trip I was green – along with 75% of the other passengers. I could swear that the ferry was completely airborne at times the waves felt so rough. A guy came around giving everyone plastic barf bags – that was my last straw. I woke up Cyndi who was napping peacefully and asked her for a Dramamine. I didn’t have any water to even wash it down – so I worked up as much saliva as I could and swallowed it. There was no way I was getting up to buy water – no more movement else I would have re-lived my kili puke fest! I really didn’t want to vomit in public twice in one week. I laid down and prayed to the gods of the Indian Ocean to give me a break. Thank goodness for older sisters – she only said “I told you so” twice – so that seemed acceptable. 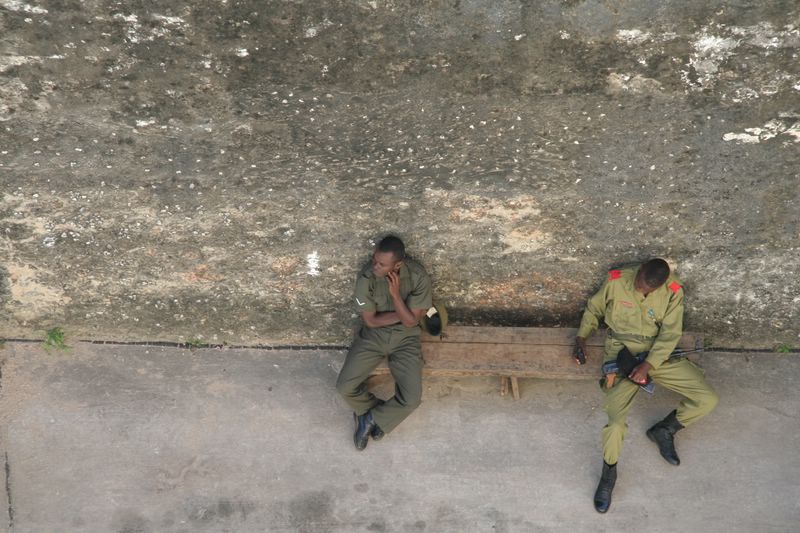 We made it to Dar es Salaam without using our barf bags and found a driver to take us to look for a hotel. We were racing against the sun and Ramadan. We said yes to the first place he took us with availability . The Peacock Hotel was a nice little business hotel containing everything we needed for one night. We organized for our new taxi driver to pick us up in the morning to take us to the airport. Important travel tip – when you find a suitably safe taxi driver – you keep him.

We went to one of the most entertaining dinners I’ve been to on this trip so far. We ate at the Peacock restaurant – a normal hotel restaurant – but that night they had live music. This consisted of an electronic keyboardist, guitarist, and a female vocalist. It sort of reminded me of Karaoke as they sang anything from Barbara Streisand to Shania Twain to Patsy Kline to Lionel Riche. It was like a tacky wedding band – but this was better because they had an African accent which gave these songs some personality! I wanted to request ‘Walk the Line’, but Cyndi wouldn’t let me! We stayed on after our dinner just to hear them sing more…it was one of those “I can’t believe that I’m doing this” moments.

That night I started worrying about my pending solo travel. I haven’t been alone yet on the trip so far – and Cyndi only had one more day with me. I was a bit distraught over this thought. Over the past 2 weeks I had such a great time with Cyndi – we really had a chance to bond again and that meant more to me than getting up that damn mountain. She’s been in Singapore for 2 years now – email contact is great – but not the same as face to face bonding…especially around long drop toilets! It strengthened my faith in family again – it was comforting. We arrived in South Africa with no issues except for my concern over my impending loneliness – but it had to happen sometime. I’d see Cyndi in Singapore in December. The next morning I checked into my backpacker hostel – tearfully said goodbye to Cyndi and started a new chapter in the adventure…solo.

One Response to "Beyond the Mountain – Zanzibar"