Snowmobiling in Quebec as a Beginner

Snowmobiling in Quebec as a Beginner

The world moves pretty fast. I am often stunned when I think of all of the changes weâve gone through in the last 12 years since Iâve started traveling. Smart phones, social media, smart watches, Airbnb, ride sharing apps, and streaming television all appeared spearheaded by computer-based change. Technology seems to move at the speed of light sometimes. But it wasnât that long ago that the gasoline engine was the change agent that had everyone all riled up, making horse drawn transportation extinct. The engine also brought a new way to travel through snowy terrain once only accessible by dog sled.

The challenges of cross-country transportation in the winter led to the invention of the snowmobile, an all-terrain vehicle specifically designed for travel across deep snow where other vehicles floundered. However, snowmobiling has morphed from a necessity to a hobby or adventure pastime these days. And thereâs no place where itâs more utilized than in Quebec.

Why You Should Go Snowmobiling in Quebec

There are plenty of places you can go snowmobiling for fun. However, few places are as good as Quebec for snowmobiling, and hereâs why. 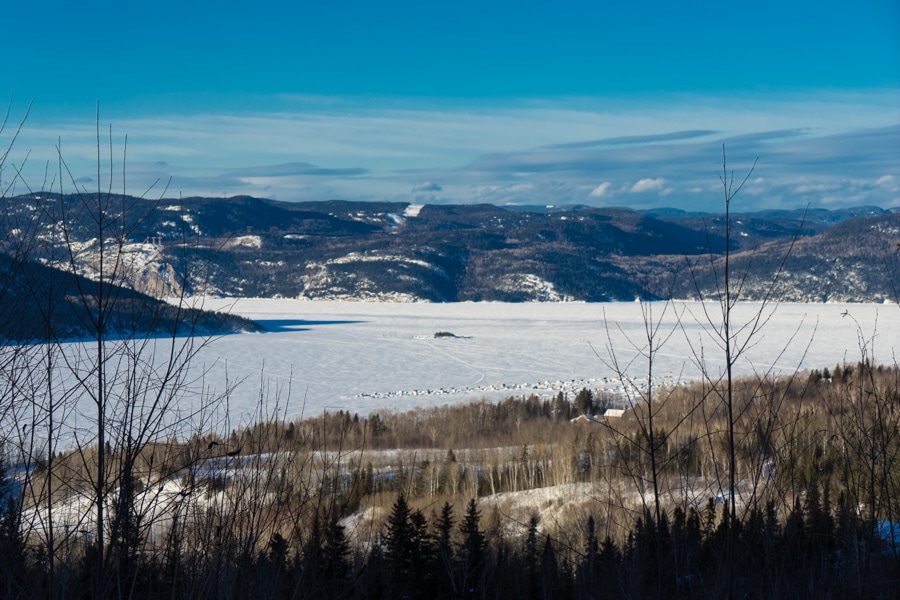 I was surprised to learn that the snowmobile was actually invented in Quebec. No wonder why it seems to be in their blood. The first Ski-Doo was launched in 1959. It was a new invention of Joseph-Armand Bombardier of Valcourt, QuÃ©bec. The original name was Ski-Dog, but a typographical error in a Bombardier brochure changed the name Ski-Dog to Ski-Doo. 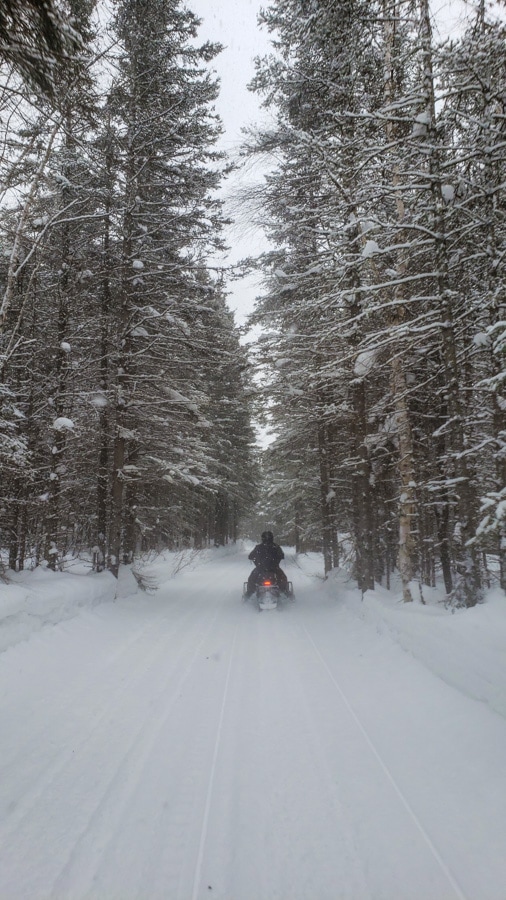 In order to snowmobile you must have snow, and lots of it! The snow in Saguenay-Lac-Saint-Jean lasts approximately 5 months; From mid-November to mid-April. Itâs practically a guaranteed winter with an average or 275 inches of snow each season.

The region has 2,300 miles of snowmobiling trails; it’s basically a whole road system to get around in the winter. Youâll also find many options for hiring guides, doing multi day tours, and snowmobile friendly bars, restaurants, and hotels in the region.

I went on a 2 day snowmobile outing with Simon, a guide from OrganisAction – QuÃ©bec Hors Circuits. I had been on a snowmobile before, but only for a few hours at a time. This would be the first time I would spend multiple days snowmobiling and covering long distances. I was excited to have a more in-depth experience and see more of the region via the back country trails.

The first day we had sunny skies for our 60 mile ride from Chicoutimi to LâAnse Saint-Jean. Simon gave me a quick run through of how to turn it on/off, use the throttle, brake, and put it in reverse. I took off with a jolt reminiscent of the first time I hit the accelerator of a car; it was pretty choppy at first! I started slow and cautious as any new beginner. But as I started to get the hang of being on the snow mobile, I eventually found myself going faster and faster trying to keep up with Simon. The entire first day was a learning experience and I loved every moment as we glided through the woods and along the riverbanks and eventually out to the fjord for some incredible views. I learned that I loved to go fast, but that wasnât the only thing I learned on my first multi-day snowmobile tour.

7 Surprising things I learned as a Beginner Snowmobiling in Quebec

I was initially worried about being on a snow mobile all day out in the bitter cold and snow. I wondered how in the world I would stay warm outside all day riding. What I quickly learned is that the people who manufacture snow mobiles have thought of everything. These machines had all kinds of built in perks to keep you warm and comfortable for hours and hours. The handles had warmers on them, there were boot warmers where you put your feet, and they even had a heated throttle for your thumb! You could easily control the temperatures so that there was never a time that my hands or toes were cold.

In addition, the whole machine seemed to be designed to keep you safe from the wind. When you are going 50mph itâs important to have good aerodynamics, and snowmobiles today are just like cars, every little thing has been tweaked and perfected to make it as comfortable as possible.

The gear also plays a big part in staying warm. Not only did I wear snow bibs, big boots, an arctic coat and mittens, but I also had a great helmet that was designed to not let cold air get in at all. I felt like the abominable snowman, but I never got cold â not once.

There is No Power Steering

When you watch people snowmobile it looks quite simple and easy. However, I quickly learned it wasnât quite like driving a car. A car turns easily thanks to power steering, but to turn this massive heavy machine, you had to put some muscle into it. In fact, the more you put your whole body into the turn and practically hung off the side like a pro motorcycle rider the better the snowmobile maneuvered â and the faster you could go. And of course, the goal is to always go faster!

Thanks to all of that muscle I used, I was pretty worn out when the day was done, and my shoulders and arms were sorer than I ever expected!

With 2,300 miles of trails, there has to be some rules else it would be pure chaos. The trails pretty much mimic the rules of the road. There are signs, speed limits, and rules to follow. However, I never did encounter any snowmobile police â Iâm not really sure how the speed limits are enforced! 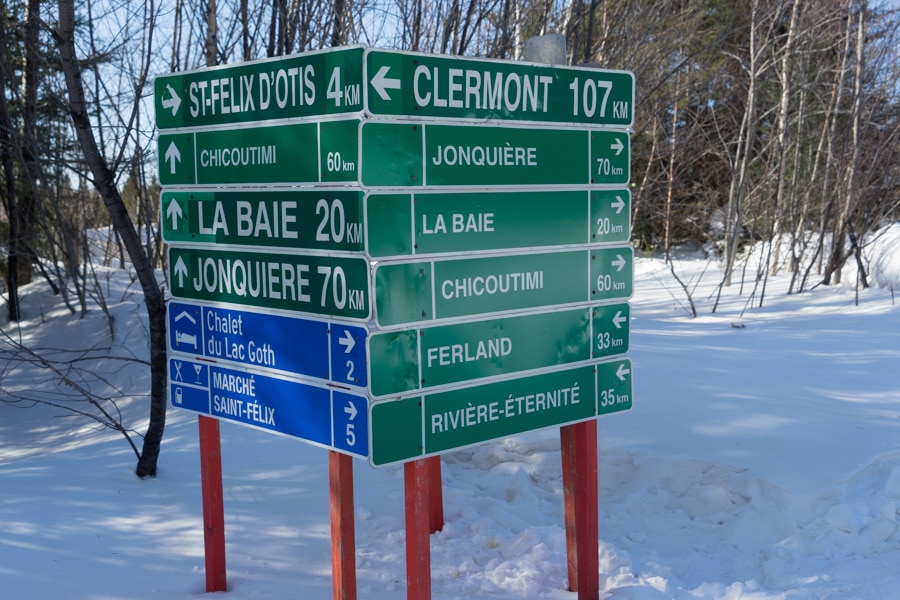 In addition, this extensive âroadâ system also has amenities like lodging, food, and bars along the way. In fact, there would even be advertising for these amenities along the trails, just like an interstate and billboards. Most of the time when you went by a hotel or restaurant, there were more snow mobiles than cars parked in the lot!

As I traveled along these perfectly groomed trails, I marveled at how much work it must be every year to put them together each year and keep them groomed. I learned that all of the trails are maintained and groomed by the 13 clubs in the region. Simon said that they groom the trails at least once a week. Itâs all done on a volunteer basis too! I entertained myself thinking about how we have a whole government body that normally maintains our roads, but somehow snowmobiling trails are all maintained with volunteers! Thatâs how much people love snowmobiling in Quebec!

One of the first things Simon taught me were the standard hand signals. Since snowmobilers normally travel in groups, itâs really helpful to understand how many are in the group following each other and what the end of the group is. This tends to keep the trails safer. To communicate this, the first person who passes you will hold up fingers for how many people are still coming behind him/her. That way you have an idea of the oncoming traffic. Then the last person in the group will hold up a fist when they pass indicating they are the last person. At first, I was surprised that hand signals were necessary, but it turned out to be really very useful. 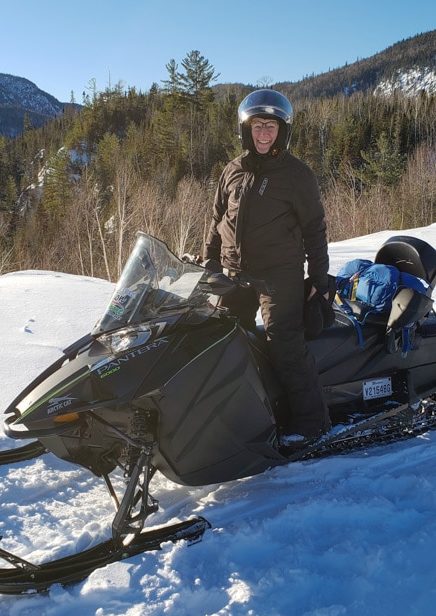 Me in my rented gear

You Donât Need to Invest in Snowmobiling Gear

Snowmobiling can be an expensive sport since you need high quality warm gear. However, you donât have to run out and invest in arctic gear immediately when you first start snowmobiling â instead you can rent it! I not only rented a snow mobile, but also all of the gear I needed right down to my balaclava and boots! This was super as I never would have been able to afford the super warm mittens or bibs, and this is something you donât want to cut corners on!

Plus, if you do a snowmobiling tour, this cost is normally assuming in the tour and they will provide gear if you need it.

Snowmobiling is More Fun When you Have Lots of Snow

This may seem like common sense, but when I woke up the 2nd day to 7 inches of new powder, I didnât know what to think. As I took off following Simon after breakfast, I quickly learned that fresh powder = more fun! This pretty much holds true for all winter sports â right? ! I felt like the fresh powder made it even easier to turn and handle curves. Plus â itâs just darn prettier too!

Having a Guide Allows You to Enjoy it More

As I kept Simon in my sights, I thought about how nice it was to simply follow him for 2 days and not have to worry about maps or reading signs, etc. Since he was a local, he knew all of the trails so well and didnât slow down once! Simon was also there to answer questions, take pictures, and teach me more about the snowmobiling culture and etiquette.

However, the biggest bonus to having a guide for me is that it allowed me to go faster than I ever would have been able to on my own. As long as I kept Simon in my sights, I was able to see the upcoming turns and curves which allowed me to be more fearless and cautious while anticipating my next curve/move. If I wouldnât have had him leading the way, I would have had to go much slower in order to make sure that I could see all of the turns coming up.

This was my first multi day snow mobile trip, but I know it wonât be my last! I loved staying overnight and having more time on the snowmobile and with Simon. I was able to see a more remote part of Quebec than I ever could have in a car! By the end I was going faster than ever and having fun trying to keep up with Simon. Itâ rewarding to keep pace with change and try new things. Apparently, I like my technology to move fast, as well as my snowmobile.

Organisaction will help you organize your snowmobiling trip in Quebec if you are a beginner or simply want a local guide! Half day and multi day itineraries are available.Â  Pus – they offer other winter adventures too!Â  Check them out here.

I was a guest of Quebec Tourism for this trip, however all opinions expressed here are my own.

4 Responses to "Snowmobiling in Quebec as a Beginner"