How Does a Polar Bear Safari Work

How Does a Polar Bear Safari Work

Imagine a fish out of water, thatâs pretty much what a polar bear is when the sea ice disappears for the summer. Itâs a huge, furry marine mammal on land, not where they belong. They arenât eating, they are roaming around for 4 to 5 months until the ice forms and they can get back out and eat again in their preferred marine environment. These big, beautiful animals are astonishing and thatâs why people want to see them.

Viewing polar bears in the wild is a pretty standard bucket list item â like seeing the âBig 5â in Africa. However, there are very few places you can actually view polar bears in the wild accessible to people, and Churchill is one of them. Every year as the bears wait around for the ice to form on Hudson Bay, people come north to have a âPolar Safariâ and see huge marine mammals roam around on land in the protected Churchill Wildlife Management Area.

It starts with the Tundra BuggyÂ®

“Welcome to buggy launch!â Luke, our buggy driver announces as he puts the big vehicle in gear, the engine rumbles, and he gets ready to take off. Buggy 14 is our home for the day complete with bathroom and furnace, and outdoor viewing platform. These are really inventive vehicles; half school bus, half motor home – but much wider. They sort of look like a Mars Rover, but instead of going over the red planet, you are going over frozen snowy tundra. And Luke is sort of like Matt Damon, but with a burly beard. Iâm pretty sure he could grow potatoes if he had to.

Luke our drive…loving the beard!

Me by the tundra buggy before launch.

A polar safari, requires a safe, rugged vehicle and a guide. Frontiers North provided both. In fact, we had two guides, Luke our driver, and David our polar bear and Arctic expert. I was full of adrenaline as we took off from the buggy launch area. I always get excited and equally anxious about wildlife viewing where you really have no control, and you hope and pray that the wildlife is going to show up. In Africa, you drive around in rugged safari vehicles getting tips from other drivers and racing off to see the pride of lions. All of the rushing around adds to the excitement. However, in Churchill I realized pretty quickly that this was a slower form of excitement. The tundra buggyâs top speed if 28mph, but I will be willing to bet a plot of potatoes on Mars that we never got above 10 mph the whole day; a slow motion safari relying on patience, strategy, and placement.

“The goal is to position us to have the bear come to us. We won’t chase the bear,â Luke explained. Even if we wanted to chase a bear we really couldnât as the buggies go nowhere fast.

The tundra is protected and very rough to navigate necessitating a slow, careful speed. You are only allowed on the âapprovedâ Wildlife Management Area roads. I became anxious when I would see a bunch of buggies parked somewhere in the distance looking at a bear and realizing you canât just put the pedal-to-the-metal and get there quickly to see the action.

We went through a particularly icy water section where we spun our big 5 Â½ feet tall wheels for a while. Luke patiently backed up a bit re-positioned a few times and finally got one of the wheels up and out of the slush and eventually we were able to get out of the slushy hole. I asked Luke if he’s ever gotten a buggy stuck. He smiled sheepishly and said, “not bad enough that I had to get a tow yet.â

At dawn you start the safari!

Itâs pretty amazing that you can even be out on the soft tundra in such a heavy vehicle to see the bears at all. It all started in 1979 by Leonard Smith, as a hobby and for his own enjoyment. Smith built Tundra Buggy #1 as a means to further explore the military trails and tundra east of town. Soon he was taking curious adventurers and photographers out on the buggies with him to view the bears and theyâd even stay overnight in the buggies. It was a National Geographic crew in 1979 who put the idea of viewing polar bears on land out into our media and minds. From that point on, Churchill was on the map for something other than the Hudson Bay Company and fur trading. It soon became known as the place to view polar bears in their habitat.

How Close Can You Get to the Polar Bears?

Like any safari â the answer is – it depends. You are dealing with a wild animal that you have no control over, so if the bear is curious, it may come close to the buggy. Else it may not even give the big vehicle a second look. One thing that was evident to me was that the bears were unfazed by the tundra buggies.

I found that the cubs tended to be more curious than the adults. The closest we got was a few walking within a feet of the buggy. One even startled all of us as we were driving by and it suddenly bolted up out of some brush/bushes and crossed the road. Itâs hard to believe that giant animals could go unnoticed, but they blend into their environment well.

Of course weather also plays a role in how close and curious bears are. And of course once the ice forms (typically in mid November), the bears leave and the viewing season is over. 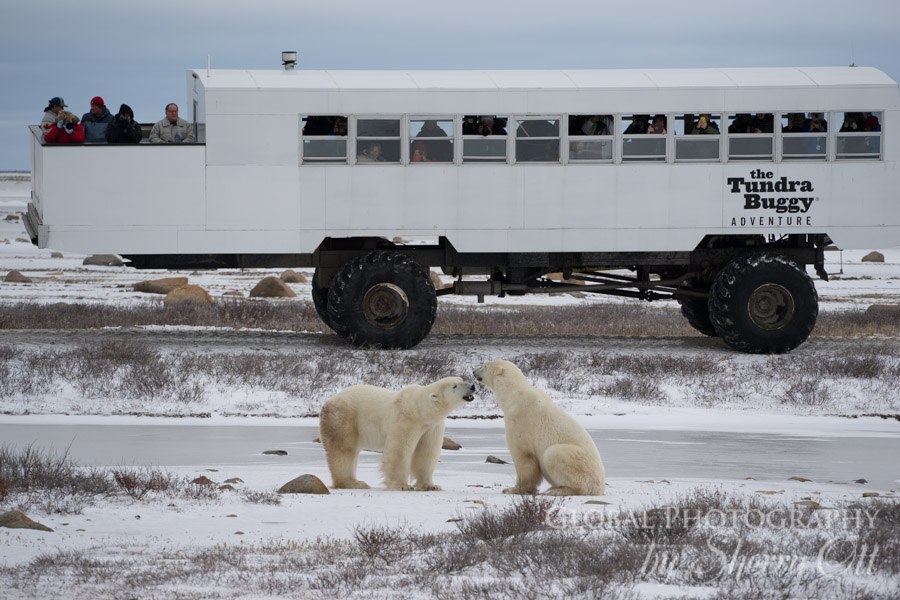 The best seat in the house!

Buggy Love is when a polar bear rubs up or stands up against your tundra buggy- bringing you within a few feet of this white giant.

A male passing by our tundra buggy

Bears sniffing around the buggy

Staying Warm on the Tundra

The weather changes fast on the tundra, one minute you have sun and blue skies and 20 minutes later you are in a blizzard with 25 mph winds and white out conditions. I jokingly refer to it as bi-polar weather. However, with the heater always going in the buggy, it was toasty warm inside. It also helped that there was warm soup and hot chocolate served at break times.

Frontiers North had really thought of everything to make your polar safari experience comfortable, they even rent out Arctic gear so that you donât have to pack bulky coats and boots.

I had a little separation anxiety when I had to turn back in my Canada Goose coat at the end of the trip. It was like living in a super comfortable sleeping bag for 2 days! And no matter how hard the wind blew â I was always warm.

Learn as You Idle Along

As we drove around the tundra on the lookout for bears, we also were getting educated about bears and the area. David provided lectures about the region and the lives of bears, while a volunteer from Polar Bears International joined us and provided more information about conservation as well as current research being done on the bearâs lives. It was like a moving classroom. And instead of a book, all you had to do was look out the window. And yes, lectures would abruptly pause when we spotted more bears.

David teaching us about how polar bears hunt on the ice.

Getting the big perspective on polar bears

Why Go to Churchill to View Polar Bears?

Why Churchill? Because the bears are here and itâs one of the only places you can relatively easily get to (with a flight or train from Winnipeg) to view polar bears in the wild on a polar safari. Of the 25,000 polar bears experts think to be on the planet, this is probably the closest polar bears get to actual civilization.

The bears are here because of its proximity to the Hudson Bay coast, it has a great summer off-ice habitat and good denning environment. The Hudson Bay current flows in a counterclockwise direction causing the western shores (where Churchill is located) to start to jam up with slush and ice first. In addition, there are 3 rivers that flow into the Hudson Bay near Churchill which also have an effect.Â  Since fresh water will ice over faster than salt water (the Bay), ice starts to form on the western shores in this region first. The bears know this and they come off the disappearing ice here in July and wait until the ice forms back in November; itâs the shortest time theyâd have to be on land. As November approaches, the bears start to hang out at the coast to check the ice conditions, making bear viewing possible. As soon as the ice forms, they are gone.

Itâs not as warm as an African safari, but itâs just as exciting, even in a slow tundra buggy! Make sure you get to Churchill to see this unique environment.

How You Can Go on a Polar Safari

Frontiers North runs a number of different polar bear viewing trips.
This is what I did, a few days out on the buggy, but stay in the town of Churchill to get a complete cultural experience.
Churchill Town and Tundra Enthusiast
Or you can also stay overnight on the Tundra in the Buggy Lodge
Tundra Buggy Lodge Enthusiast
If you want a unique slow travel experience take Via Rail train service from Winnipeg and Churchill, a 2 day train trip over the tundra. I also took the train back to WinnipegÂ  – a great experience.
Churchill Town and Tundra Via Rail
Donât worry about being cold as Frontiers North will even rent you Arctic gear which I was super happy I had.

I was a guest of Travel Manitoba and Frontiers North during this trip, however all opinions expressed here are my own!

3 Responses to "How Does a Polar Bear Safari Work"