I had spent the day in the heart of Germanyâs Danube country (Donaubergland) where moments ago I was paddling through the gentle ripples and waves of the Young Danube River, and now I found myself trying to simulate that wave design as I pushed cherries into a cake batter. My inner artist was awakened and I felt as if I were creating a wavy, chocolaty masterpiece. Should I depict ripples, or a tidal wave, or should it be still like it was sometimes as we were canoeing on it? How did I want to depict the Danube River with all of its quirks and surprises?

Chef Gertrude did the fist row of cherry waves pushing the cherries into the pound cake batter, and then instructed me to finish the rest following her wave pattern. I donât think she was putting as much artistic thought into it as I was, but thatâs probably because sheâs made hundreds of Danube Wave cakes in her lifetime.

I had come to a local hotel/restaurant/farm, Brigel-Hof, in the tiny little town of Messkirch to get a German cake baking lesson from Gertrude, a local baker whoâs been mastering the Donauwelle cake for 30 years. Apparently the cake was very popular in the 80âs, and then like everything, it fell in and out of fashion. However, currently the Danube Wave cake is on an upward âwaveâ again â yes that pun was entirely intended. Itâs a simple sheet cake made with two layers of batterâ plain and chocolate â with some added cherry schnapps. The locally grown cherries are the key to the wave as when the cake bakes, the cherries sink down deep into the batter and create a ripple effect that appears like waves when you serve the slice of cake. 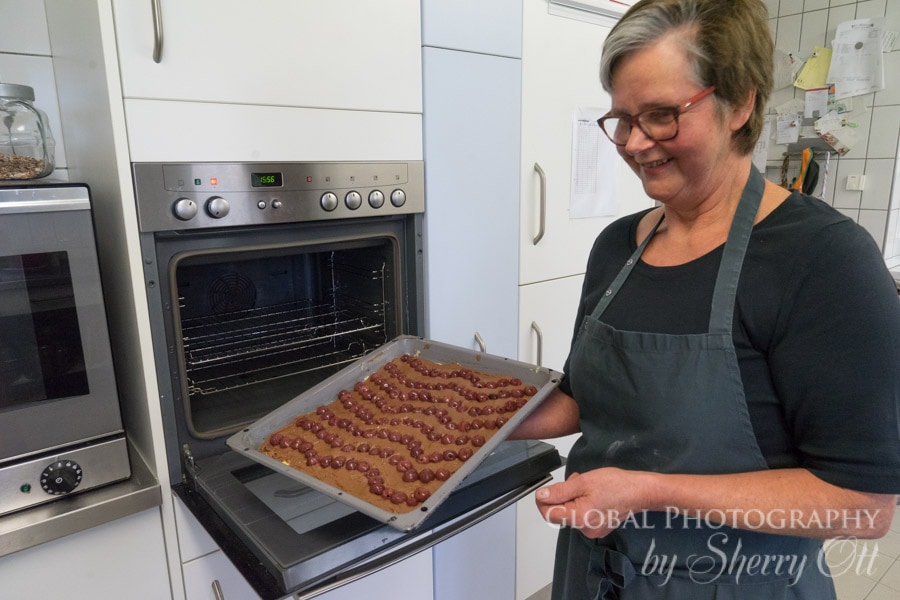 Gertrude showing off the wave pattern of Donauwelle Cake 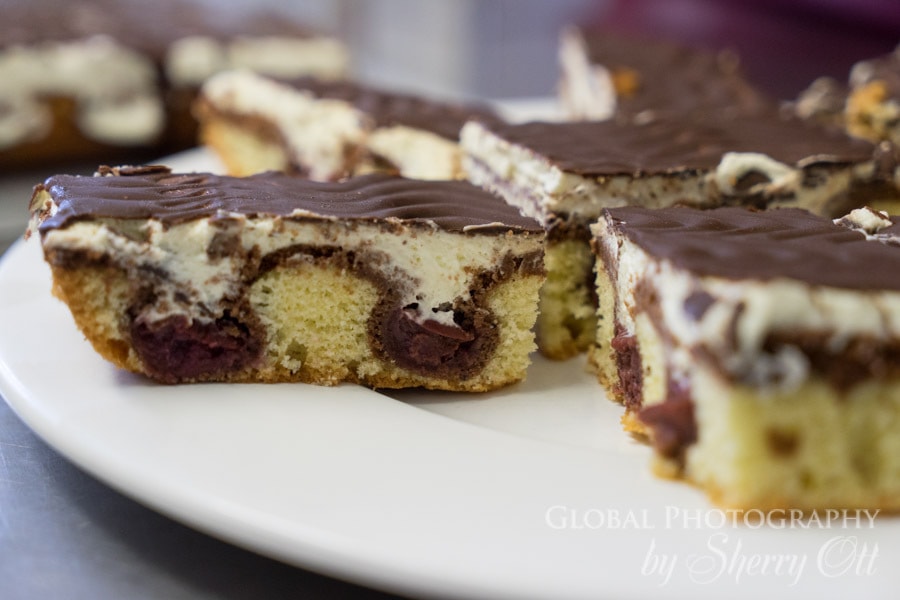 See the waves of the Donauwelle Cake

I watched as Gertrude lovingly made the layers of the Donauwelle cake explaining each step as she went along. As I saw each ingredient Gertrud added, I couldnât help but travel back through time one year to when I watched the Black Forest Cake being made with practically the exact same ingredients.

While in the Black Forest town of Triberg, Chef Josef showed me how to make Black Forest Cake. I remember as he showed me all of the ingredients he said that the cake came about because they could easily get all of these items from the farm â so it was a cake developed out of necessity that had grown into an international favorite. 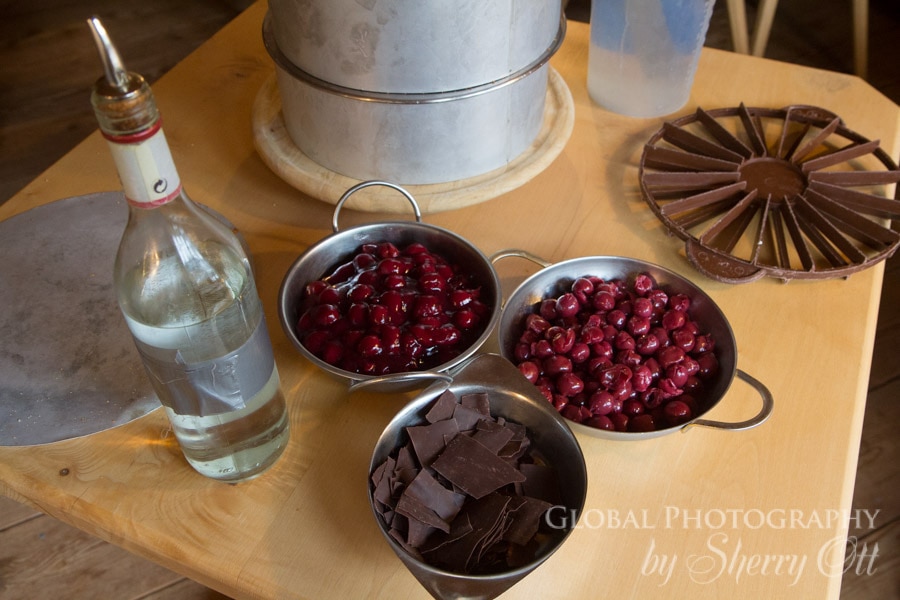 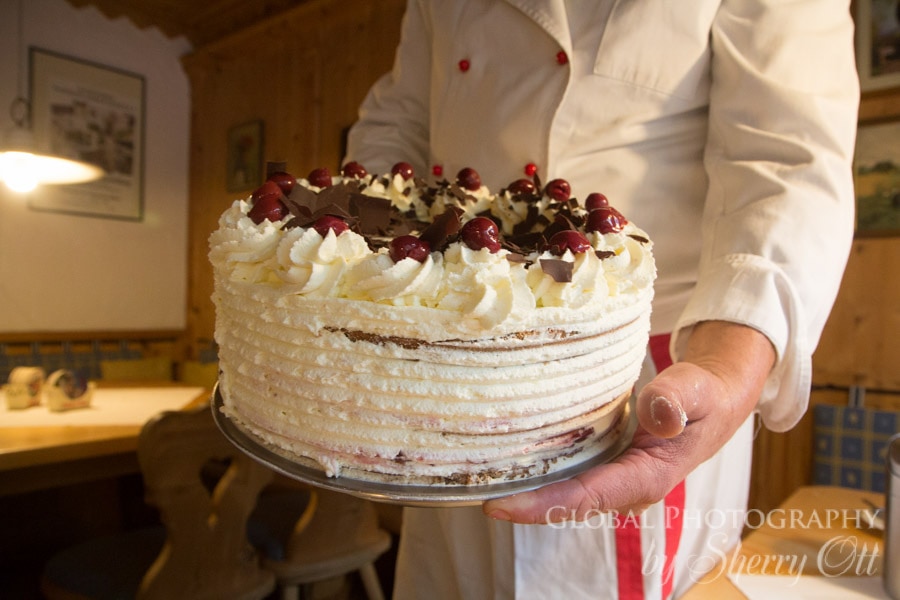 Much like fraternal twins, the Donauwelle cake and the Black Forest cake have a lot of genetic similarities.

The Black Forest cake got its name many centuries ago from how thick and wooded the region used to be with fir and pine trees. Donauwelle translates into Danube Wave â also describing the traits and nature of the region.

This is the most strikingly similar. Each cake is made with a pound cake batter, however the Donauwelle does have a plain cake batter included too in addition to the chocolate batter. They each have cherries, fresh cream, chocolate, and cherry schnapps.

From a color perspective they look similar â layers of chocolate, red, and white make up both cakes. However the Black Forest cake is made in round layers (normally 3), with a cream and cherries in between layers. Itâs a sexy looking cake no doubt. The Donauwelle cake is a single layer sheet cake where all the ingredients are pressed into each other and are more intense and thinner.

How can two cakes be so similar in two nearby regions and why did they take different forms, but use the same ingredients? I asked bakers, I asked locals, I scoured websites but I found no answers or explanations. There was only one thing left to do then – come up with my own conspiracy theories!

Two sisters grew up eating and making Donauwelle cake. They were in love with the same man from the Black Forest. However the man chose sister B, married her and they moved to the Black Forest to live their lives. When Sister A, still jealous that she wasnât chosen, heard that B was making Donauwelle cake for her new husband, she became enraged. She forbid sister B from making their regional cake in another region. So to spite A, B decided to make a similar cake using the same ingredients, stacking it into layers, and giving it a different name â Black Forest Cake.

Black Forest Cake became wildly famous in other regions and countries. However the Danube River region was jealous that the Black Forest Cake was getting the spotlight and all the visiting tourists when they had an equally beautiful area to show off to tourists. They sent a spy to the Black Forest to steal the recipe. So they decided to make their own cake to compete with the Black Forest cake to help lure visitors to the region. They decided to simply use the exact same recipe and make it a sheet cake. Looking at how it baked into waves, they called it Donauwelle cake in the hopes of attracting tourists to the region. However the plan never really gained the momentum they had hoped for.

Maybe for some reason the people along the Danube River had bigger/wider ovens than the people in the Black Forest, allowing a whole sheet cake pan to fit in. But in the Black Forest they had tiny little narrow ovens that werenât wide enough for a sheet pan, but instead had plenty of room for round cakes that would eventually be stacked.

Much like crop circles, itâs simply not explainableâ¦Aliens clearly had something to do with it.

Or maybe, just maybe, what Chef Josef said about using local ingredients that are easily found in the region is the answer. The regions are right next door to each other, and one would guess that they would have similar crops or agricultural backgrounds. Maybe it was just the availability of ingredients in the region and two people miraculously used the same ingredients to make similar cakes in different shapesâ¦.that seems plausibleâ¦.

Nawwwâ¦.it couldnât be that simple. 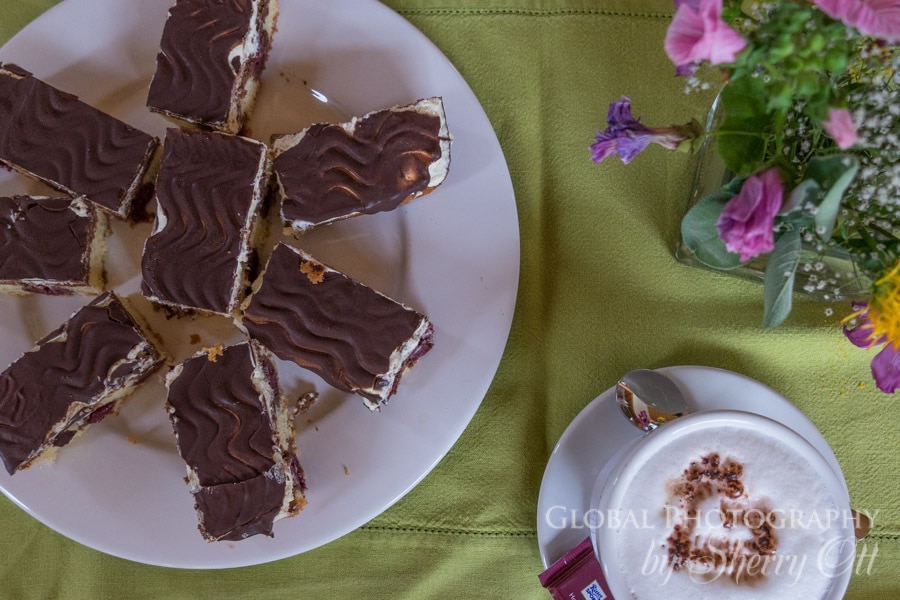 Letâs face it â something is weird about Germany and their cakes. When I researched these two cakes I also found a THIRD variation – Schneewittchenkuchen (Snow-white Cake), which is essentially the same thing and shape as Donauwelle cake. However in East Germany they called it Snow White cake, and in Western Germany thy call it Donauwelle cake.

AND â are you ready for thisâ¦German Chocolate Cake isnât even German!

Itâs complete cake anarchy! I give upâ¦and Iâm just going to eat it and not think about where it came from any longer! Unless of course you have any good theoriesâ¦

What’s your theory on why the two German cakes are so similar?Â  Share in the comments below!

I was a guest of Germany Tourism as I ate all of my slices of cake, however all opinions expressed here are my own.