When the Unexpected Happens While Traveling

When the Unexpected Happens While Traveling

I had dozed off on my early morning Atlantic Airways flight from Iceland to the Faroe Islands. Fighting jetlag from my previous dayâs US flight,Â  it was all I could do to get up and get myself to the airport in time this morning. There arenât many flights going to the Faroe Islands from Iceland, so I knew I couldn’t miss this one.

âM’am, your breakfastâ¦your breakfast is here,â the flight attendant said as I groggily turned and looked at her confused. I was tired, and I also didnât understand why I was getting breakfast on this flight when no one else was getting breakfast. I later learned that the tourism board booked a special fare that included a meal and a drink. This was a press trip, and often youâll get special experiences as they want to show you the best time they possibly can. 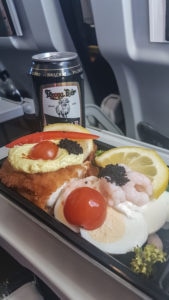 She put the tray in front of me and then asked what kind of beer Iâd like. I looked at my watch, it was 9AM. âBeer?â I questioned her.
âYes you get beer with your ticket,â she explained.

So thatâs how I ended up eating a Faroese breakfast of fish and caviar on bread and drinking a beer on my Atlantic Airways flight to the Faroe Islands at 9AM. I figured I might as well just go with it. It was my first introduction to the Faroe Island beer – a decent pilsner with a cute sheep on the can.Â  The beer was actually pretty great once I poured tomato juice into it, this was the way I would drink it in college.

The Question I Never Expected To Hear

I was sort of waking up as I enjoyed my breakfast and the flight attendant suddenly was back. She leaned down to the other journalist in my row I was traveling with and looked at us both. In a low voice she said, “The Captain would like to invite you into the cockpit for our approach and landing into the Faroe Islands. Would you like to go?”
Ummm – what? Did I just hear that right?

For a moment I wondered if I was still dreaming. Or maybe it was a joke that Mark, the other journalist a few rows ahead of us, was playing on us. Iâm sure he put her up to this. Or maybe I was already drunk?

Jill and I looked at each other trying to make sense of this request and both looked at the flight attendant, smiled and said âYes!â

âGreat, Iâll come back and get you when we start our landing,â she said

Jill and I were stunned. I was still in a weird state of shock, jetlag haze, and a bit tipsy. In my 12 years of traveling around the world, A captain has never asked me to join them in the cockpit. This wasnât a small plane; this was an Airbus320 – a proper big plane with 3 seats on each side of the aisle.

There was a part of me that was still skeptical, but then the attendant returned back, âLadies, are you ready?â And with that Jill and I got up and followed her to the front of the plane, she knocked on the cockpit door, and it opened. This was really going to happen!

Two smiling pilots greeted us as we walked in to the small space and the attendant shut the door behind her. They turned around, introduced themselves, shook our hands, and showed us where to sit and how to put on the seat belts and headsets. Note – seat belts in the cockpit are infinitely more complicated than passenger seat belts! I wondered if one of them should be watching out the front instead of helping us, but the plane seemed to be cruising along just fine as we got situated.

The space was small, and I was amazed at everything you could see â there were windows all around me. Currently we were in the clouds cruising along, but it felt so strange to be at the nose of the plane, I felt out of balance. Iâve never even sat in the front of a plane in a first class seat before, so I wasnât quite sure how to feel about this new position.

The first order of business was the safety talk. Just like in the passenger section of the plane, we had to know how to get out of our seatbelts and out of the plane. They showed us where the fire extinguishers were and how to use them to break out the window if necessary. I felt like a kid again on my first ever flight â everything was new to me.

Captain Kurt and Co-pilot Joe were incredible âhostsâ; they multi-tasked flying the plane, talked to us about Faroe Islands culture, pointing out places to see on the islands, and communicated to air traffic control! I had the song Danger Zone running through my head as I thought this was probably the closest I would ever get to my ‘Top Gun’ moment.Â  Kurt and Joe (aka Maverick and Goose) wore their aviator glasses, transporting me back to my teens. I learned that Captain Kurt actually did his pilot training in Colorado which explained his excellent English.Â  He tried to teach us some Faroese words – but I was too busy watching for MiGs. 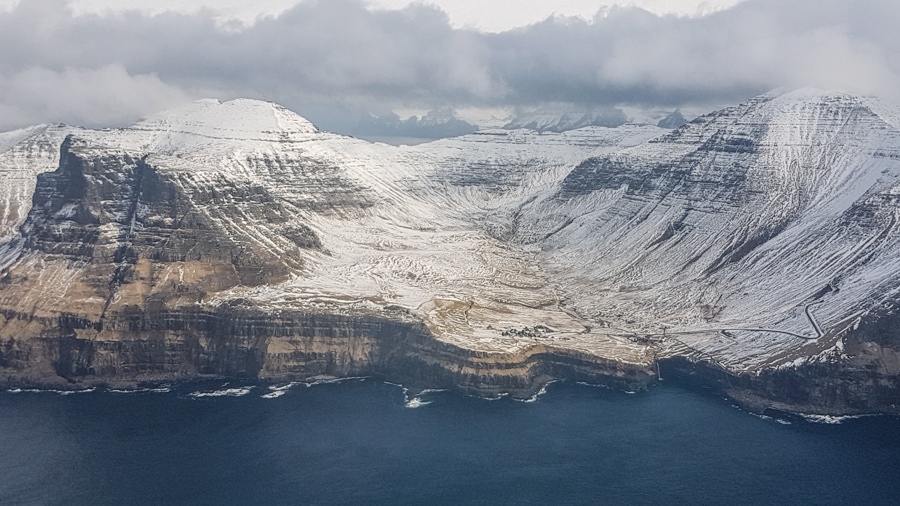 Arriving in Vagar Airport – View from the cockpit

Pretty soon the nose pointed down, and we slowly emerged from the clouds. I watched Captain Kurt give his landing announcements to everyone in the normal cabin. It felt surreal to be on this end of the plane. But then just when you think things canât get any better, they did. We got our first glimpse of the islands and they were spectacular. Landmasses jutting up out of the Atlantic Ocean covered in light snow as if someone had shaken powered sugar above them. Joe pointed out waterfalls, and various roads and villages that we should check out while Captain Kurt pointed us towards the runway. We had an incredible vantage point in the cockpit.

The island chain has only one airport in Vagar, with only one runway, and it was a beauty. We approached between two islands that felt more like fjords as we glided between the cliffs. I could see the one runway and the pavement quickly appear under us as Captain Kurt gently laid the big plane down and engaged the breaks. I just sat there with a permanent grin on my face wondering if I was still in a dream.

We taxied to the end of the runway, and did a 180 turn to turn around and go to the gate. We sat and talked to the pilots as the rest of the plane disembarked. It was weird to still be sitting there talking after the whole plane had emptied out. We took pictures and continued talking to the pilots as the flight attendants brought us our bags. As I got off the plane, the cold air hit my face. I looked around at the mountains and breathed in deeply, making sure that this wasnât a dream. I took one last look at the plane and saw Captain Kurt and Joe in the window of the cockpit waving.

No, this wasnât a dream; instead it was most certainly one of the most exciting travel days of my life. Sometimes this job of mine has perks.Â  I had just made a grand of entrance into this new destination and wondered if anything could be better than this. But within 15 minutes of being in the Faroe Islands, I realized that everything here was spectacular. I knew I would be in for a wild ride on these remote 18 islands in the middle of the North Atlantic â and this was just the beginning. 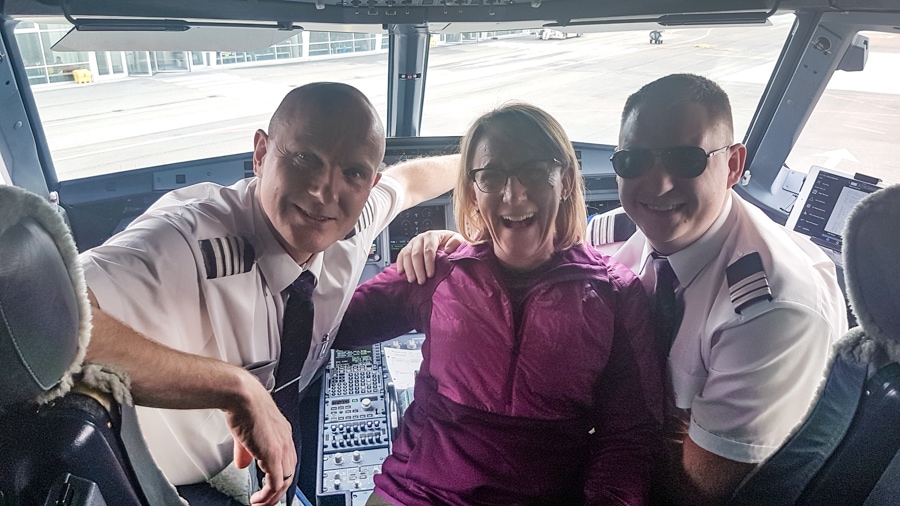 The best travel day of my life!

How to get to the Faroe Islands

I was a guest of Visit Faroe Islands on my trip, however all opinions expressed here are my own.

3 Responses to "When the Unexpected Happens While Traveling"