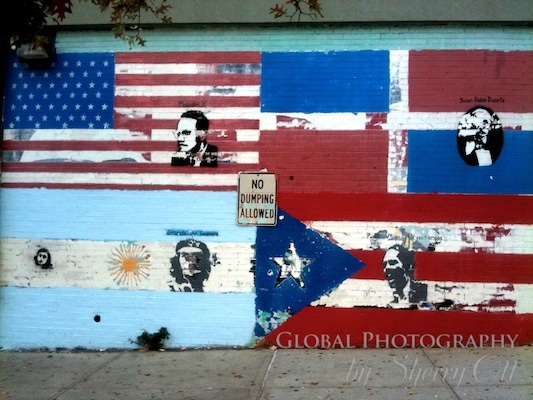 Washington Heights street art even has an ethnic feel

Iâm still amazed at how much fear enters into every little piece of my life. Iâm not necessarily talking about terror or intense fear â but more like things that intimidate me and stop me from being curious and adventurous. It creeps inside me everyday no matter how many stamps I have on my passport.

In my recent conversation with Andrew McCarthy he talked about taking little steps to overcome fear and get out and travel more. I felt like his advice was spot on â so this morning as I laced up my running shoes that had sat in the corner of my little room since I arrived in NYC 3 weeks ago â I decided I would take little strides and go see explore my neighborhood â a neighborhood that slightly intimidated me.

Iâm staying with my friend Charlie Grosso of Mongol Rally fame while Iâm in NYC this month. She lives in Washington Heights â a place I had honestly never heard of when I lived on the Upper West Side from 2003 to 2006. Washington Heights is in Manhattan, but it feels like a completely different world. The region is located 155th St. to Dyckman St., Harlem River to Hudson River. This is a part of NYC that I had never really seen while living in my isolated neighborhood where I had everything I ever needed and rarely ventured north.

When I arrived at the beginning of the month, the first thing I noticed when I came out of the subway â was the language â Spanish everywhere. People spoke Spanish to me â just assuming I knew it as if I were in Barcelona. But as I spent more time in the area going to and from the subway, I realized it wasnât just the language that was different â there were different restaurants, fewer chains stores, more street vendors, no yellow taxis, an increased number of older people outside hanging out on their stoops or socializing, people walked slower, and the fruits and vegetables were different than what I found just a few 50 blocks south. It was as if I were staying in a foreign city trying to get familiar with itâs rhythm and attitude â yet this was a place I called âhomeâ before.

As I went out running without a map and simply exploring the streets without any plan, I marveled at how community based it felt, and how safe it felt. There was nothing to be intimidated by at all. It wasnât until I actually put on my running shoes and got âcloser to the groundâ venturing off of my simple path to the subway entrance and back did the neighborhood really come alive for me. In fact, the run made me feel alive again â as if I were exploring and becoming comfortable with a new city anywhere in the world. I have always found that running brings me closer to a new location and often takes my fear and intimidation away when traveling.

This was the real NYC, the gritty, ethnic part of NYC that makes it the unique cosmopolitan city that it is. Â I only wish I were in better shape so that I could run longer and explore more!

2 Responses to "Exploring a Familiar City"