In the Path of Destruction 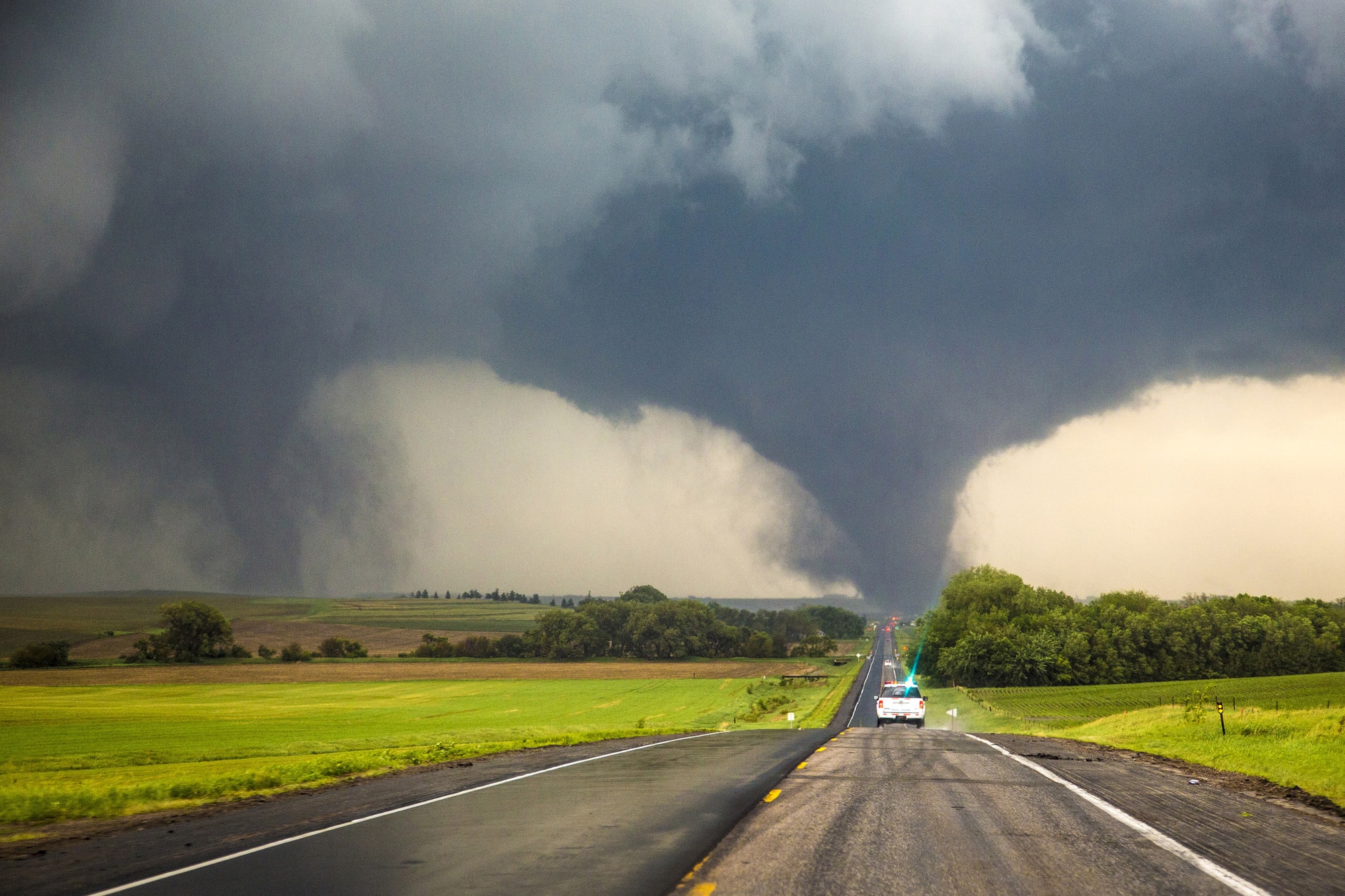 We took a left off of highway 15 and drove through the north side of town. The familiar old weathered homes were there as usual. In desperate need of paint, love, and care I couldnât help but wonder if people were cooking up meth in those homes in this small village town in Nebraska. My mind runs wild with the thoughts of Breaking Bad as I turn to look the other way at the water tower â the one icon of the town still standing after all of these years. In a quick Â¼ mile we got to the end of town by the cornfield and took the right turn as we always do when we visit my aunt and there is was. Absolutely nothing.

A wide swath of nothingness threw my brain into a confused state. It was familiar, but it wasnât. It felt real, or was it a dream? There were no trees, no homes, no cars, no electrical poles, no life – except for a few corn stalks. We stopped the car at where my auntâs brick home used to stand. Nothing. I looked around â nothing. It was like a airport runway as I turned and looked clear through to the Main St. area which used to be hidden by houses and trees. All of the debris had been cleared away and put in large piles on the corner of town, but I could only imagine what it looked like right after the twin tornadoes rumbled through town.

I first heard about the storm and Pilgerâs destruction while I was in Peru traveling with my niece. Yes, ironically as I was on the Niece Project, my aunt’s home was being destroyed.Â  We were getting ready to be offline for a few days for a Andes hike so was checking Facebook one last time.Â  I saw a post from my cousin saying my auntâs house had been destroyed but she was ok. I had no idea what he was talking about.Â  Itâs devastating hearing bad news when you are thousands of miles away in a foreign culture. You feel helpless. Luckily with internet connectivity itâs fairly easy to be in communication quickly. I immediately sent messages off to my family trying to get more information, but there was nothing I could do but watch the aftermath from afar. Digital hugs arenât the same as the real thing â one of the downsides to always being on the move. 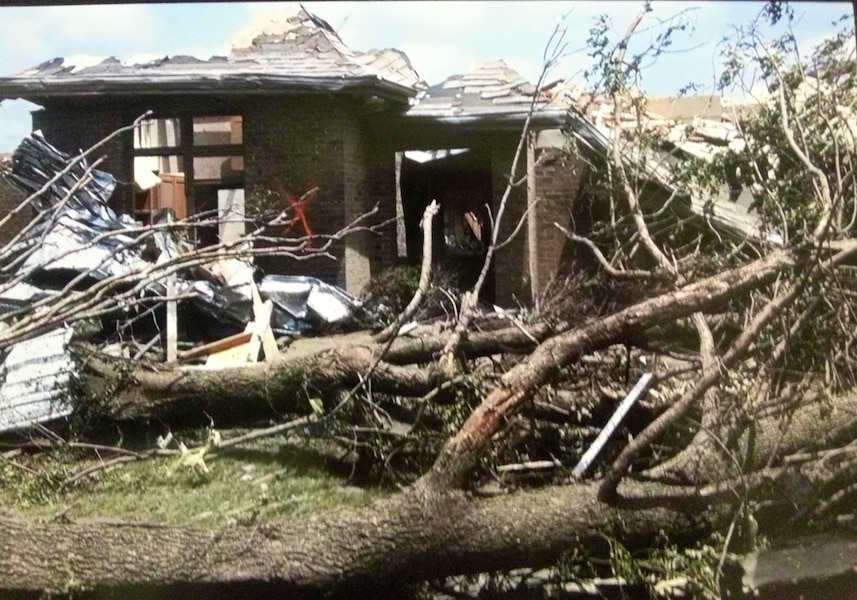 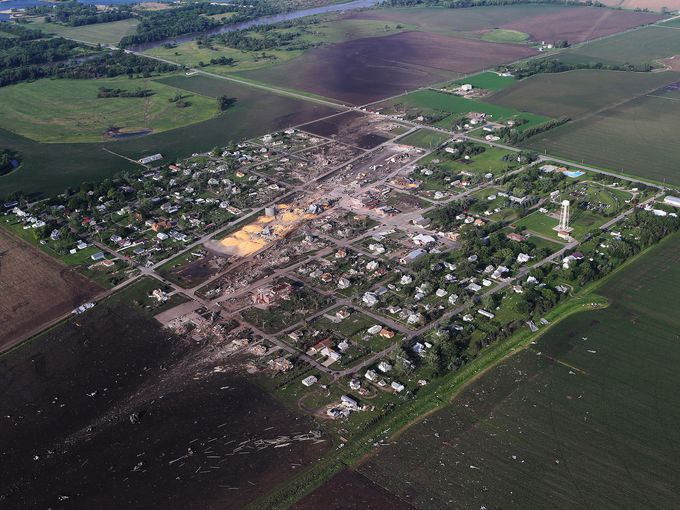 Aerial view of the path of the tornado. The town is really small and my aunt lived near the bottom left corner where everything was blown out into the fields.

In June EF4 twin tornadoes ripped through a cross section of the tiny town of Pilger Nebraska, a town where my relatives and parents called âhomeâ. A shrinking population of 328 people and no new growth meant that the community already had a lot stacked against it, but now this may be the final blow. 75% of the buildings in the town were damaged or destroyed. 45 to 50 homes were completely demolished, including my auntâs on the end of town. The tiny Main Street area and buildings were left in a pile of bricks and the main business in town â the grain elevators – were left in a pile of twisted metal as corn and soybeans covered the whole town. My aunt who hid in her closet under a pile of quilts was ok, but said that when the noise was over, she looked up and saw blue sky â her roof blown off. Two people were killed in the storm and many injured.

As I visited family in the Midwest this month, I of course wanted to go see my aunt and the town. It had been 2 months since the tornado, so I wasnât really sure what Iâd see in the twin tornado aftermath. I was gobsmacked as I looked at what was left of the town. The brick school where my parents had graduated from had been destroyed and then torn down. Only the facade remained. There was one miraculous tree standing as the rest had been cut to stumps on the tornadoâs path. The church where I played my piano recital of “Here Comes the Clowns” for my grandparentâs 50th wedding anniversary celebration and subsequently the location of my grandfatherâs funeral had been leveled. Only the cement foundation and the brick bell tower somehow remained. A miracle?Â  Maybe.Â  Main Street only had 2 buildings life â one of which was the library. The fire station and village clerkâs office was still in shambles as if people just gave up with the cleaning process and left it as is. There were American flags everywhere and the letters âOKâ spray-painted on homes that looked as if they were held together by a thread. Stalks of corn and soybeans grew everywhere in the middle of this nothingness as when the grain bins were destroyed it left seed everywhere and now had taken hold in the newly upturned soil. Everywhere I looked it felt surreal, as if I were in a movie set. 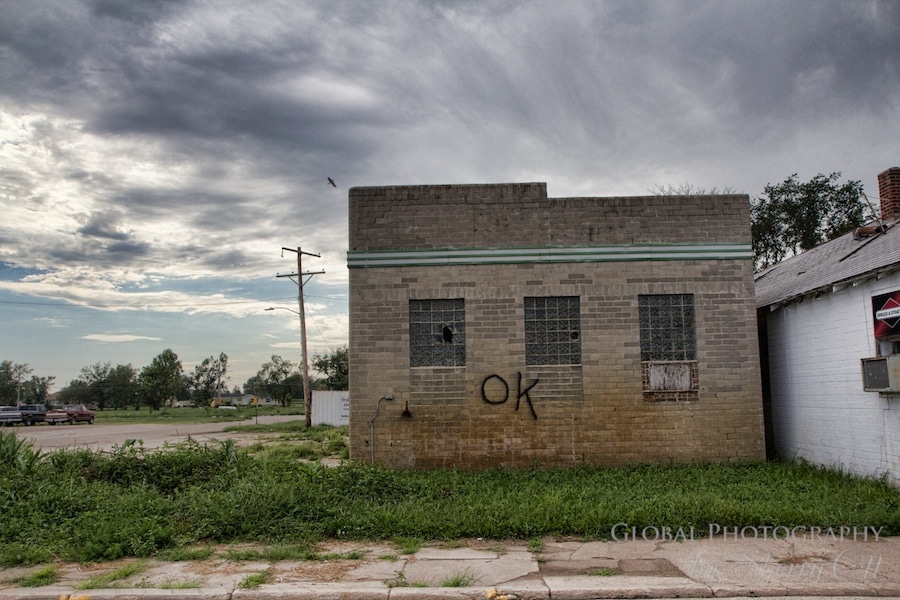 One of the few buildings near main street still standing 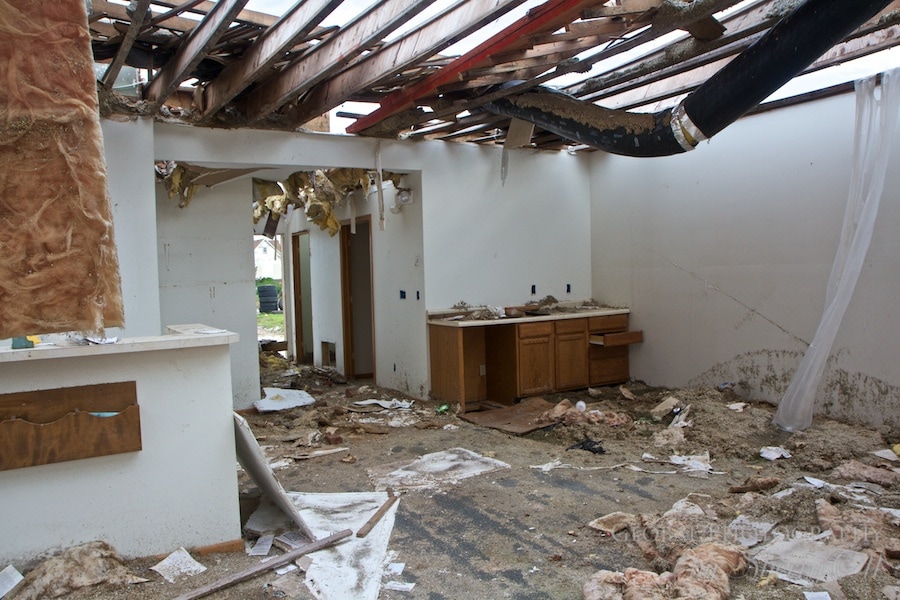 The village clerk’s office remained as is after the tornado. The whole town looked like this, but now was demolished.

There was a single grain bin standing â a new one that had been constructed since the 10 had been destroyed. The rebuilding process had begun. But after spending the day with my aunt hearing the stories and seeing the aftermath with my own eyes, Iâm left wondering if Pilger will ever really be rebuilt. I donât have high hopes. As I wrote about a couple of years ago, the town was on a fast decline prior to the tornadoÂ  – and this might just be the final blow. My aunt wonât relocate there, sheâs still trying to decide what she will do, but thereâs really nothing for her there any longer. Iâm trying to convince her that this is a blessing really â she needed to downsize, she wanted to move, so maybe it will actually work out better for her. However at 75, sheâs not quite as comfortable with nomadic living as I am. 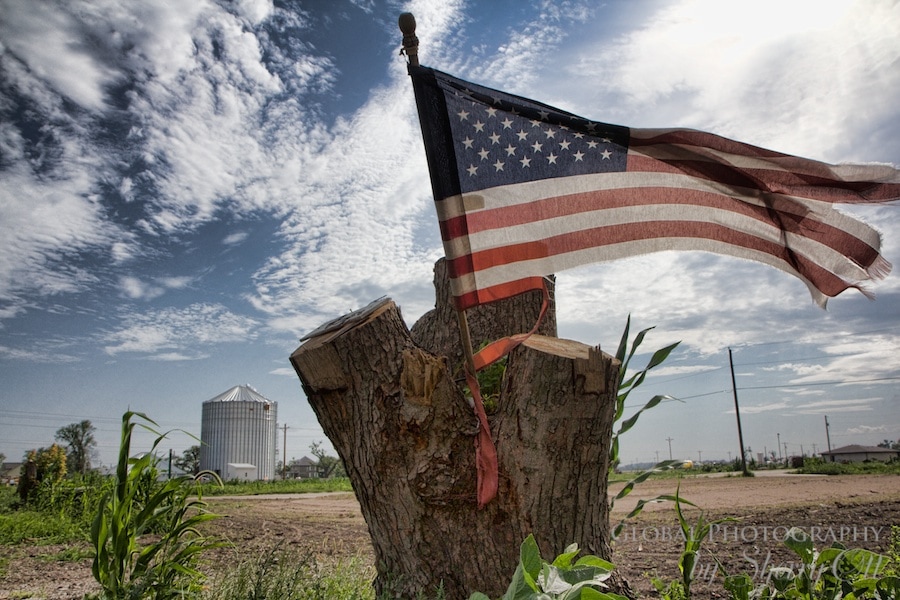 A flag flies on a remaining tree stump. You can see the nothingness in the background. This was the direct path of the tornado.

The clean up still continues and some rebuilding has begun, but Iâm left wondering what is Pilgerâs next chapter? I donât really know. I have the pictures and the memories of what this little community once was and that will have to be enough for now. My grandparents are buried there, my parents will be buried there â so I know my time with this little town isnât finished.

Want to help?Â  Here’s how you can give to the rebuilding fund and learn more about the recovery efforts. I provide this link because people have asked me how they can help.Â  I didn’t write this post with this in mind.

More Image of the Aftermath: 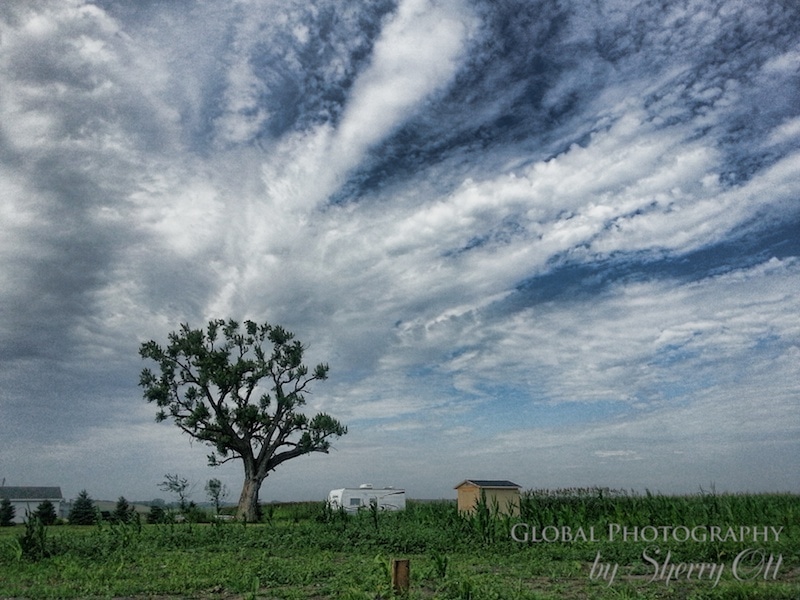 A single tree survived in the path. 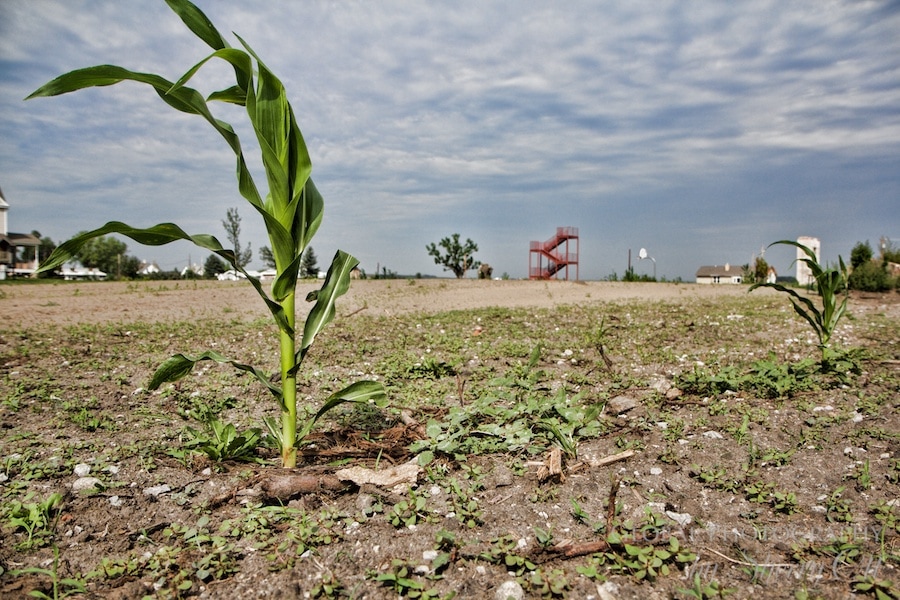 Corn and soybean seeds spread throughout the town and is now growing everywhere.

The path. Standing where my aunt’s house used to be looking through the empty section of town 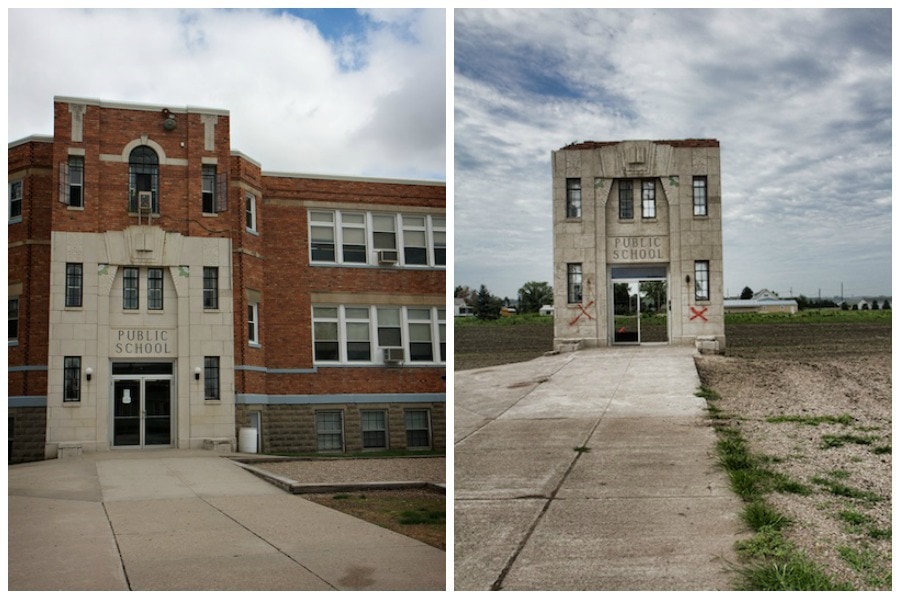 Before and after of my parent’s high school.

The village clerk’s office before and after

Main street before and after

6 Responses to "In the Path of Destruction"