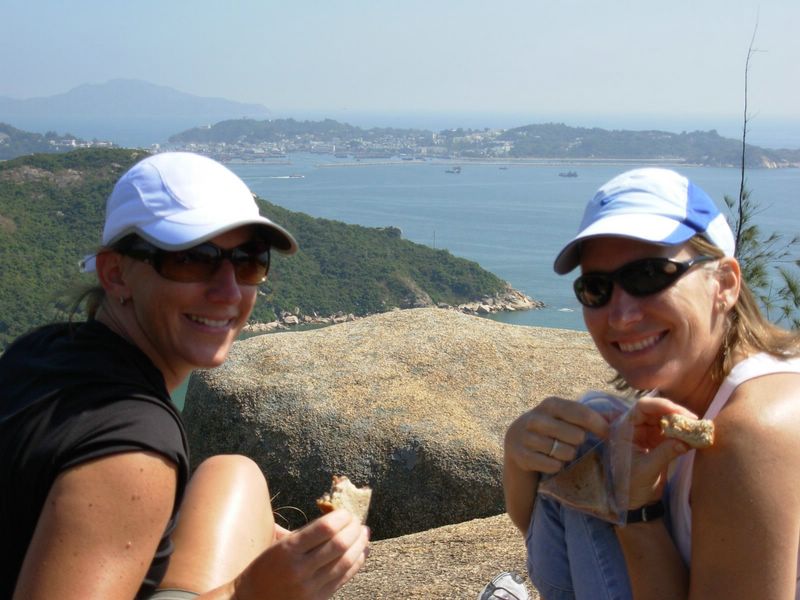 Photo: My sister and I

As I started to count the number of countries Iâve visited for my sisterâs Red Hot Holiday Party invitation, I also counted up the number of countries she traveled to with me. Surprisingly, the number came to about two-thirds of the total. Sure â I counted a country if she flew into it (Kenya), or flew out of it (S. Africa) while not really visiting it â but hey â if she supported me in some way there, even for a day â then itâs worth counting. I still have a vivid memory of her dropping me off at my first ever hostel in South Africa as she left for the airport and I started my solo adventure. I was in tears, and she probably wondered if I would ever make it this far 15 months later. It was as if I was going off to college for the first time, on my own, no family to support me any longer.

We have been through some tough travel stuff together this last year â mainly the Kilimanjaro climb (or failure depending on whoâs telling the story). Finding a hotel in Dar es Salaam just hoping that we wouldnât get mugged, carrying luggage through knee deep water in order to get to our hotel in Thailand, 8 inches of snow on a narrow mountain pass in China â but itâs all been worth itâ¦in the name of sisterhood.

I have integrated into her everyday life in Singapore and she (nor my brother-in-law) hasnât kicked me out yetâ¦which is pretty amazing! One thing that constantly surprises me is that sheâs my biggest fan always promoting my travels, my vagabonding decisions, and my website. I think sheâs probably hoping that one day I will sell a book and I will support herâ¦payback.

I am most proud of the fact that sheâs adventurous enough to come on these trips with me â even if it is for a small portion of them. No matter how impatient or pissed off we get at each otherâ¦unlike other travel partners â sheâs family, we are stuck with each other. We often joke about the fact that we could run the Amazing Race as a team. I actually think we would be pretty successful, however it wouldnât be without fireworks and disagreements. We have the same genesâ¦but different things certainly set us off. Iâm competitive, but sheâs uber competitive with others and herself. We both have our moments of bitchinessâ¦but Iâm uber bitchy if I donât eat and sleep enough. It would make for good reality television â but alas, you have to be living in the US to apply for the showâ¦yes, I actually looked up the application requirements. After all â I am looking for a jobâ¦reality TV star doesnât seem that far fetched.

I spent this Thanksgiving in Singapore with her family. As we went around the table saying what we were thankful for â the theme of âfamilyâ rang true for everyone. From my perspective, as Iâve traveled all over the world â the theme of family and specifically âextended familyâ is extremely strong in most countries. Families look out for each other â they take care of one another, they live with each other. For some reason â when I was in the US, I never really felt that it was a strong theme. Sure, family is important to Americans, but itâs definitely lower on the radar â behind work, achieving, money, home, and simply acquiring stuff. So I feel lucky to have been able to experience this more global bond with family. Iâm showing my nieces that even though they fight with each other and charge each other money for going in the otherâs room without permission, they may actually end up enjoying spending time with their sister as they become adults. They look at me as if I have 3 heads when I tell them this, but seeing Cyndi and I travel, live and have fun together is the best life lesson for them. I often find myself daydreaming about what they will be like when they get older, and how they will interact. I plot in my head all of the stories Iâm going to tell them about how when they were kids how they fought for completely insensible reasons â all wishing they could be only children at some point. I often lecture themâ¦you are stuck with your sisters â stop fighting it.

I spent my last week in Singapore enjoying the nightlife in Clarke Quay, bonding with my nieces under a Singapore snowfall, and doing what I do best â party planning with my sister. We once again threw the annual Red Hot Holiday Party in Singapore. Word must have gotten out â as this year it was bigger, boozier, and better yet! Last year it was a welcome party for me and holiday party. Photo: Cyndi and Frank ready for the Red Hot Holiday Party! This year it was part holiday party, and part going away party for me, and once again, my sister was out promoting me all night, between jello shots, she would introduce me to people telling them of my travels.

Thanks to her, Iâve made a lot of new friends in Singapore over the last year of in and out travel, it is really my 2nd home. My sisterâs church priest even attended the party and was kind enough to offer me a place to stay at the friarâs and nuns quarters if my family ever kicked me out! I can safely say that I have NEVER been offered housing in a nunnery beforeâ¦but it would probably make for a good storyâ¦hmmmmâ¦

Saying that it is hard to leave my sister and family on this side of the world is an understatement â itâs gut wrenching. Itâs similar to that first time in South Africa with Cyndi watching the car pull away wondering what my future holds. My sincerest thanks goes out to my sisterâs family Frank, Bethany, Megan, Lindsey, and Mylen once again for taking me in, letting me sleep in the bunk bed, feeding me, making me do homework again, teaching me about family, and putting up with my inappropriate dinner conversations! Itâs a good thing that sisterhood is a bond for life, else I might have been out on the street months ago!

One Response to "Sisterhood"