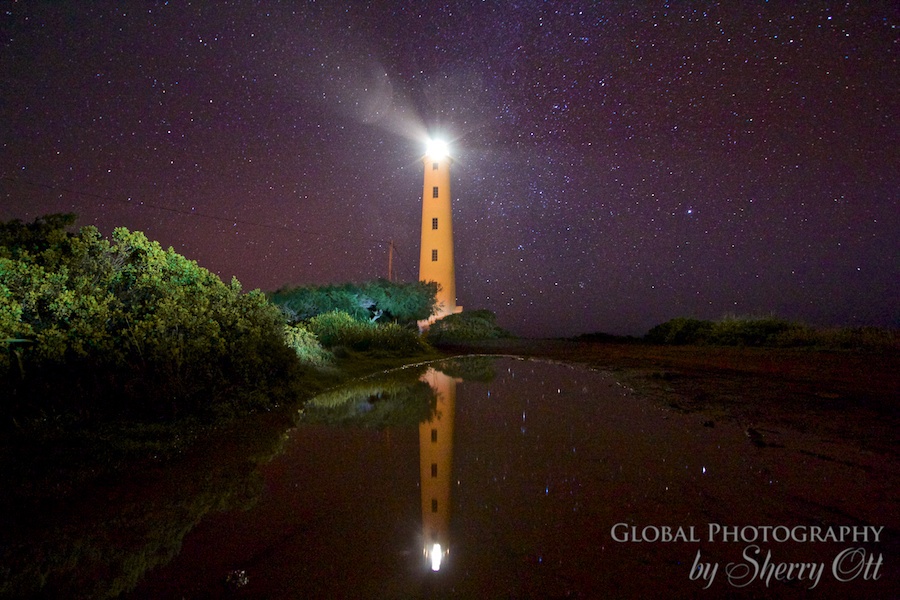 Learning how to do night photography in Kauai

âWeâve met before,â he said âat a Meet Plan Go event in Minneapolis.â I was startled when I received this reply from a random enquiry I made about a photography workshop I was interested in attending in Kauai. It turns out I had indeed met Patrick before. He attended a Meet Plan Go event in Minneapolis 3 years ago, which put Patrick on a path to sparking change in his photography career. Shortly after that event he left his corporate photography position at General Mills and moved to Kauai to start his own photography business.

When coincidences like this happen we say the world is small, but I like to believe the world is somehow karmically connected. After that initial surprise interaction, Patrick and I spent time together in Kauai taking photos and talking about making change in your life.

When I came across the Kauai Adventure Photography Workshops after doing a random search for photography workshops on Kauai I was immediately hooked. The premise of the workshops was to take people out to lesser seen and photographed areas of Kauai and work on specific photography skills such as night photography, landscapes, working with waves, long exposure waterfalls, and they even covered post processing. Two photographers, Patrick and Matt, who live on the island, run the workshops. They know exactly where to go to get great shots that arenât your run-of-the-mill Kauai photography. Many of their workshops included some pretty adventurous hiking, which was just what I was looking for – especially to do it with photography in mind and being guided by a local. I couldnât imagine a more perfect opportunity for me.

I am no professional photographer, but I am a serious photo enthusiast who does travel photography. Even though Iâm shooting regularly (which is the best practice you can get), I seldom revisit the techniques in photography. It had been 6 years since I had taken a photo class of any type, so I was thrilled to do a few workshops with Patrick and Matt.

I met with Patrick and we discussed what I wanted to focus on. I had lots of goals; I wanted to try my hand at night photography, improve my landscape techniques, I wanted to learn how to love shooting waterfalls (something I normally detest), and I wanted to improve my food photography. And finally if we had time I really wanted to go over my post processing.

What photo equipment Should You Bring to Hawaii?

First Patrick took me out to the end of the road at the Kalalau Trail head and beaches and we focused on shooting waves coming in along the Napali Coast. It didnât take long for Patrick to get me out of my shooting rut and get me using new settings on my camera that I had neglected. I also received tips on how to choose the right aperture for the lens I was using as well as changing the way that I look at focal points. Some of this stuff was mind blowing to me â mainly because when you shoot for a long time without refreshing your technical skills â they really do suffer. I had made assumptions that were incorrect but had been operating that way for years so they were pretty deeply rooted. Things he changed in how I would have gone about getting this wave photo:

â¢ Used a larger aperture than I normally would have approached the shot
â¢ Moved with the wave like panning
â¢ Shoot a single focus point
â¢ Move off of auto white balance and shoot for the shade while outdoors primarily
â¢ Use a telephoto lens to just focus on the wave instead of the whole landscape view
Many of these lessons were then used in all of my future shooting with Patrick over the next few days.

This is how I approached my first wave shot â before I had put any of the advice Patrick gave me to use: 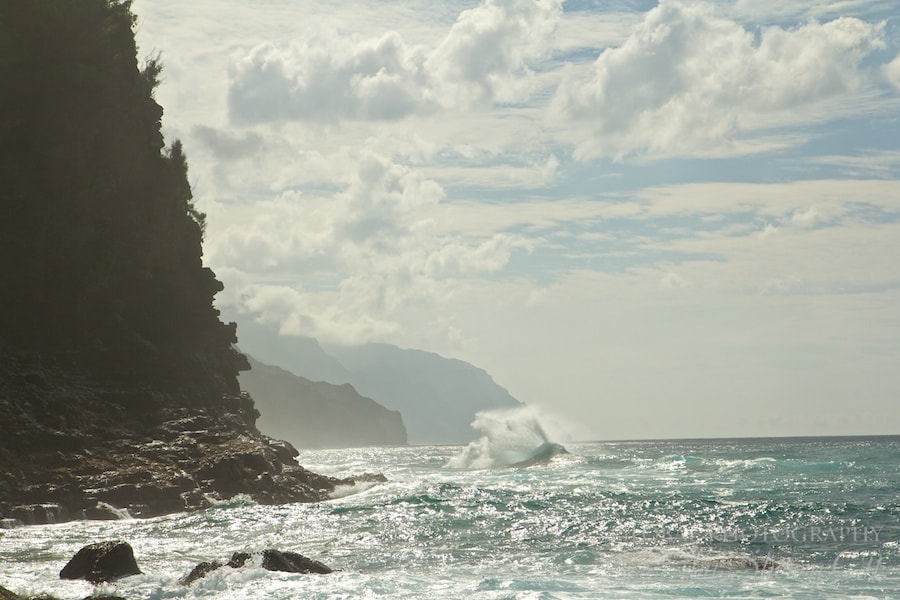 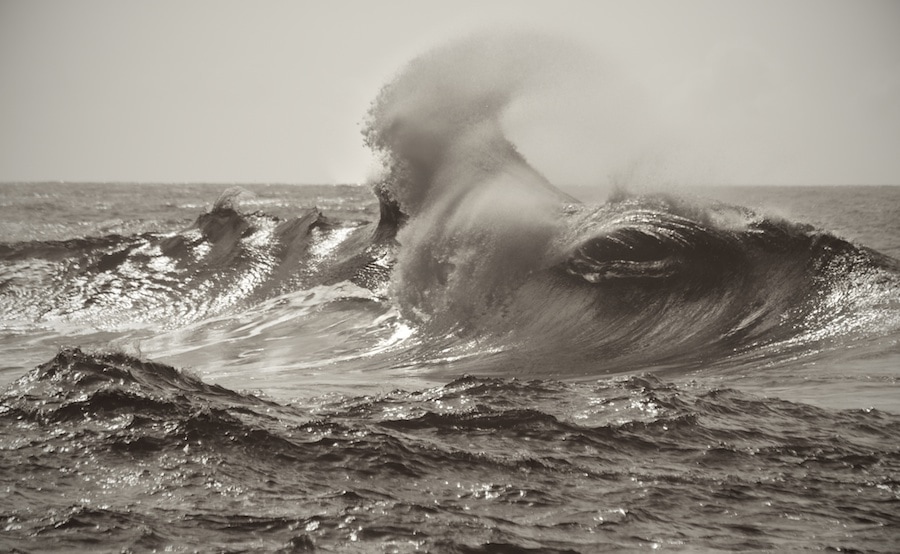 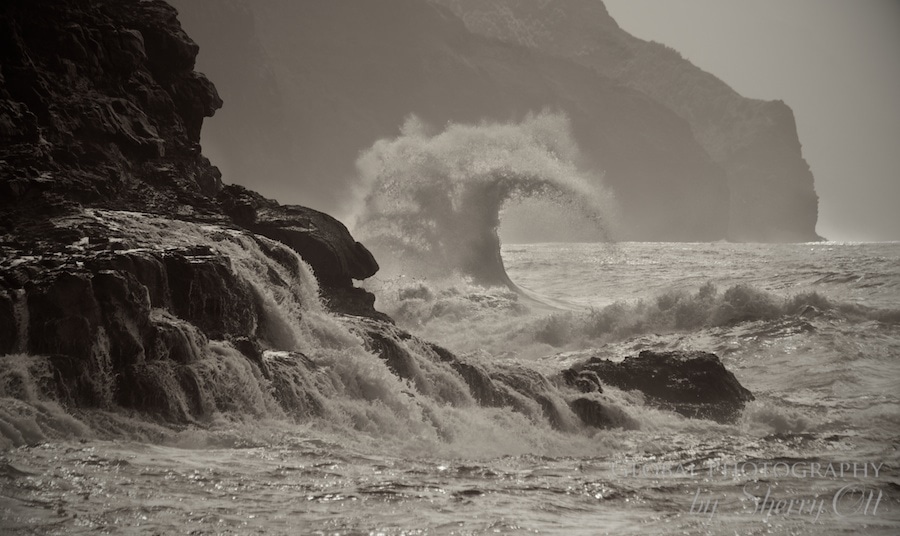 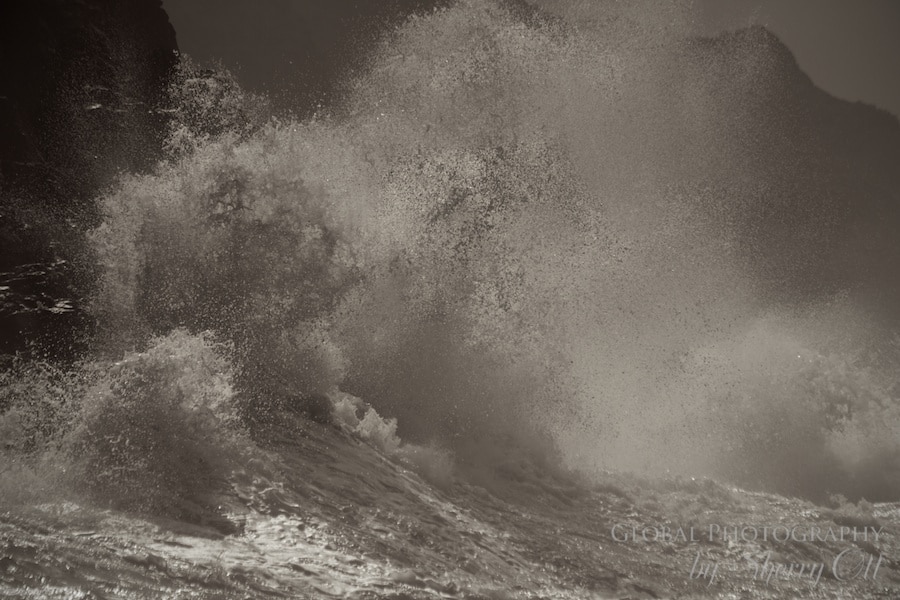 We next hiked down into a little known cave in the area. This is not a cave tourists would normally find on their own, but I was happy to follow Patrick and his friend and model, Morgan, down into the dark cave with our headlamps on. He had brought a tripod for me and this was my first step in learning more about long exposure photography. We set up deep in the corner of the cave and we took a number of test shots to figure out the correct settings. I honestly would have been lost doing this on my own. Even though I understand aperture and shutter, long exposure was a whole new world to me. 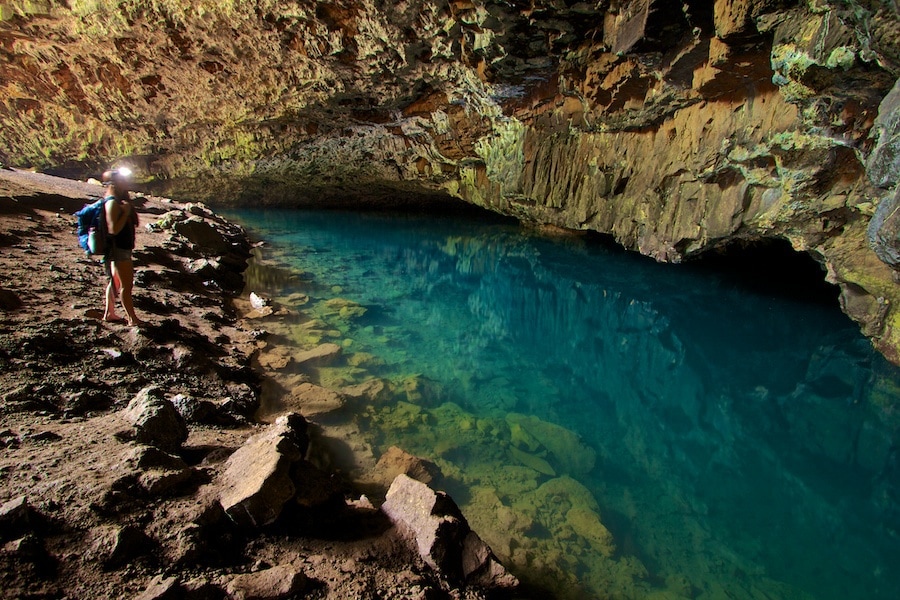 The next day after a heavy morning rain we decided to hike to Hoâopiâi falls. Patrick warned me it would be muddy, but worth it since the water would be flowing heavily over the falls. This was another chance to work on long exposure â there were 2 waterfalls we were going to hike to before nightfall. I normally hate shooting waterfalls, I think they are boring and can never really get the effect I want since I donât have a tripod with me normally. The hike through the dense forest was really fun and Patrick got me closer to the waterfalls than I ever would have ventured myself. He knew all of the ways down and around that made for great shots. I actually took a before shot of one of the waterfalls to simply capture how I would normally photograph a waterfall before Patrick taught me anything. Then I let him work his magic and we worked with a long exposure again to get the right effect. Morgan again was our model who was fabulous at sitting in cold water and holding a pose for a 30 second exposure! Having Morgan in the shot really added a great perspective overall to the shots.

The first set of falls were about a 20 minute hike in.  there are a few vantage points and they require you to scramble a bit to get there.  The water was flowing furiously! 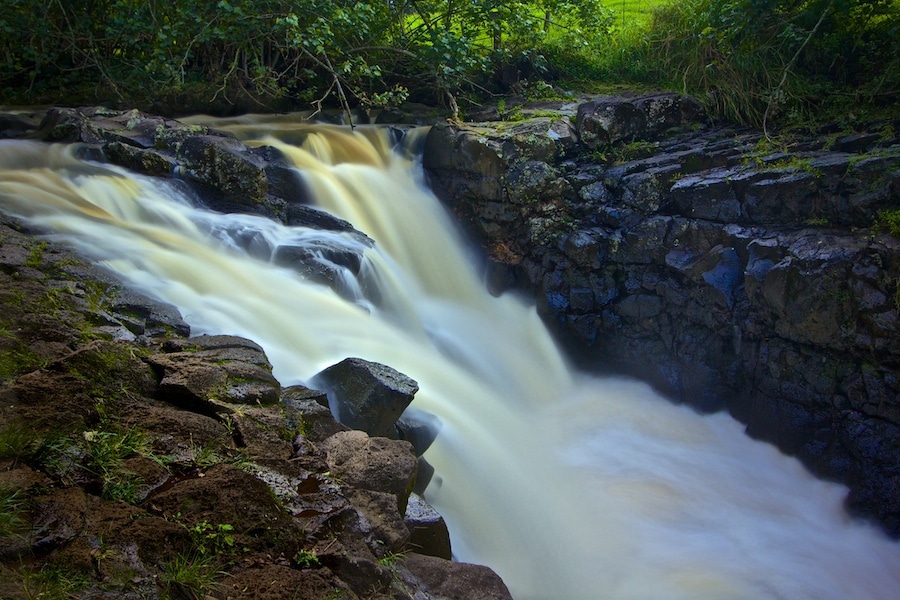 For the second waterfall we had to hike further in and down a pretty muddy bank hanging on to tree roots – but definitely worth it once you got to the bottom! 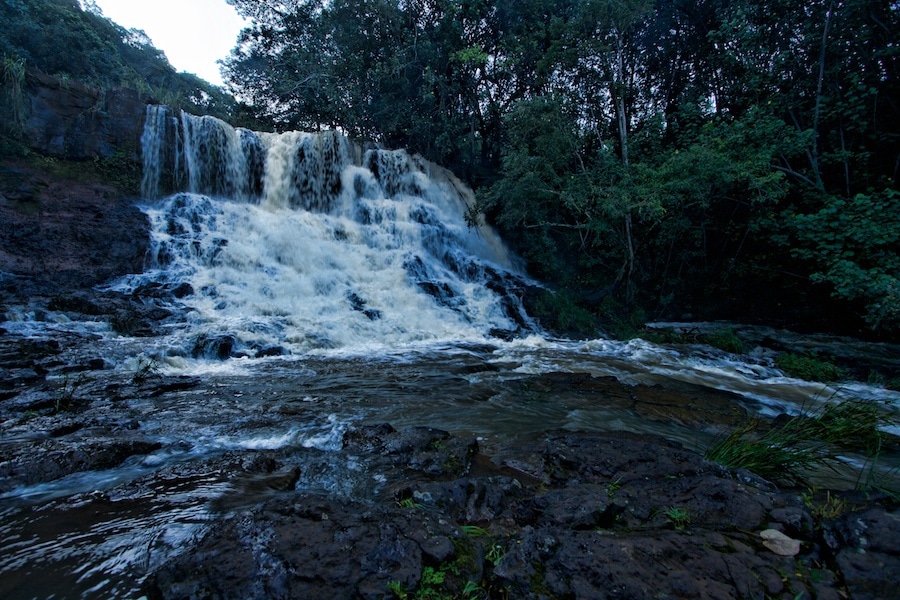 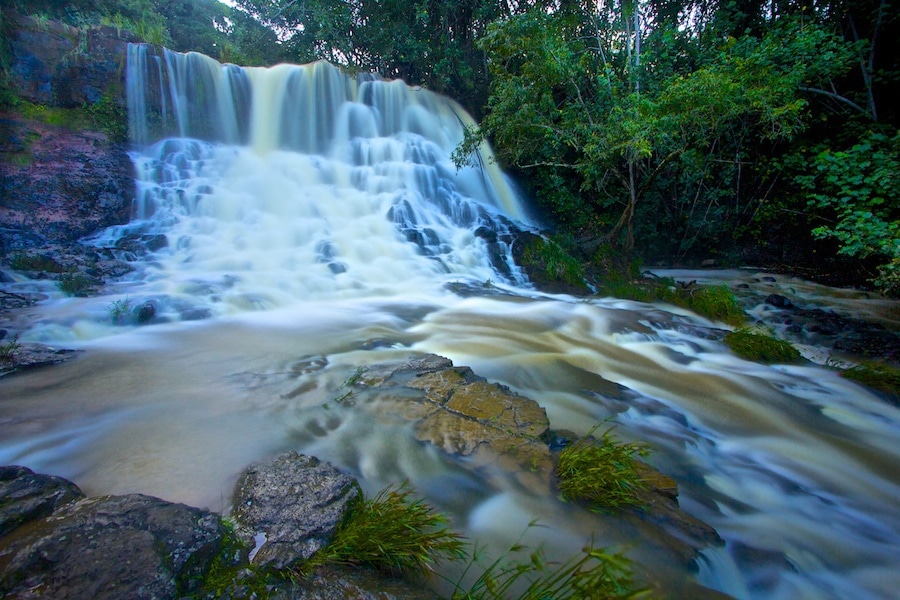 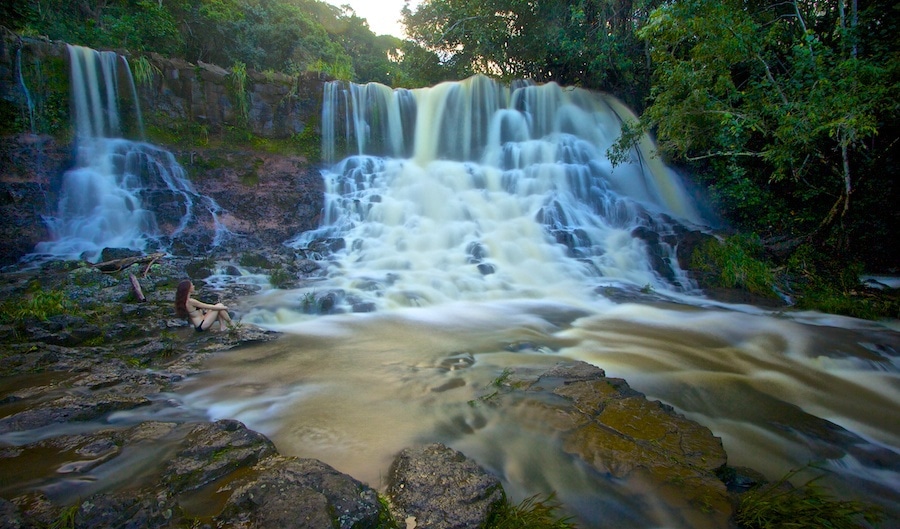 That night we also focused on food photography something that Patrick was quite good at from his General Mills photography days. He once again helped me with white balance, composition, and how to use a white napkin as a reflector to bring in more light in dimly lit restaurants. I loved it when he told me to think of the food on the plate as a landscape when it came to composition. He explained the mashed potatoes were a mountain and the green beans a waterfall flowing down the mountain. 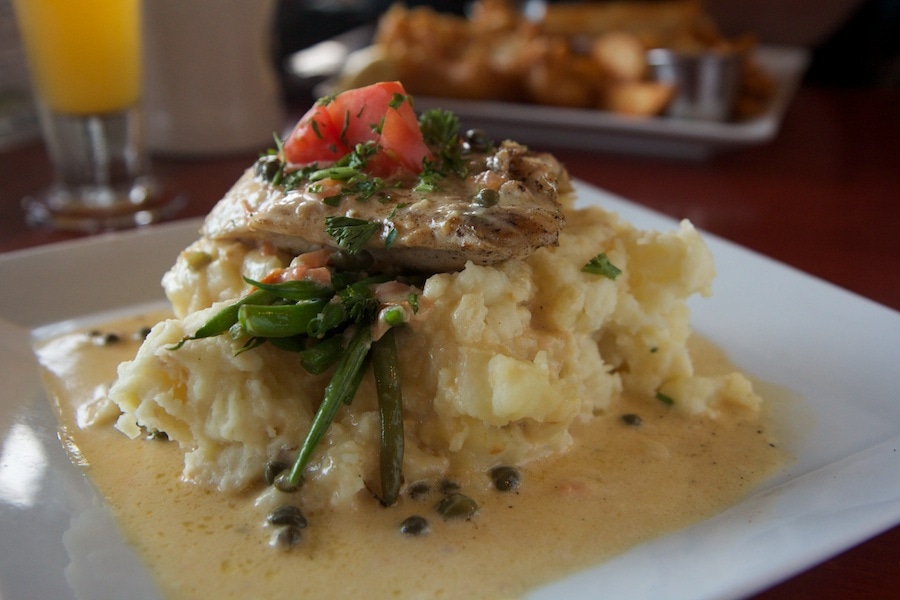 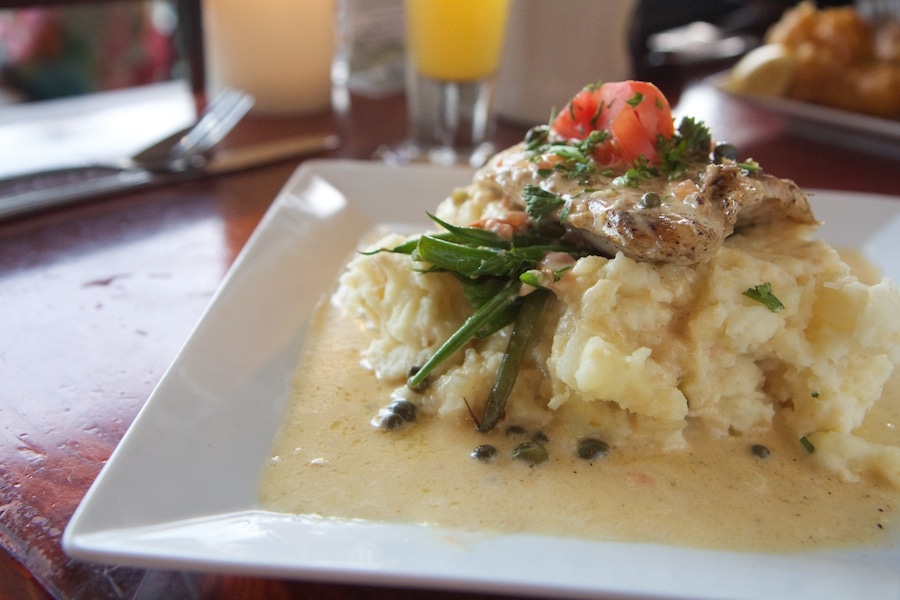 We kept an eye on the weather got lucky with clear skies one of my last nights I was there. Matt and Patrick took me out to a lighthouse by the airport so we could do some long exposure night photography and light painting. With headlamps and flashlights, we hiked out onto the rocks as the waves crashed and we quick looked up the direction of the tide. We set up our 3 cameras on tripods and waited. We were waiting for the planes to land to get a long exposure light trail over the top of the lighthouse. This was a simple waiting game that we had to test out a few before we were able to get the exposure and timing right. During the long exposure Matt would âpaintâ the rocks with a flashlight providing more light on the rocks bringing out the details. It was like being blind and shooting. I never really knew what I was going to get until the 30 seconds were up, but with Matt and Patrickâs help I got the hang of shooting in the dark. Patrick also found a dirty little mud puddle that served as a great water reflection for the lighthouse (the lead photo on this post) â something I never would have thought of in the dark. 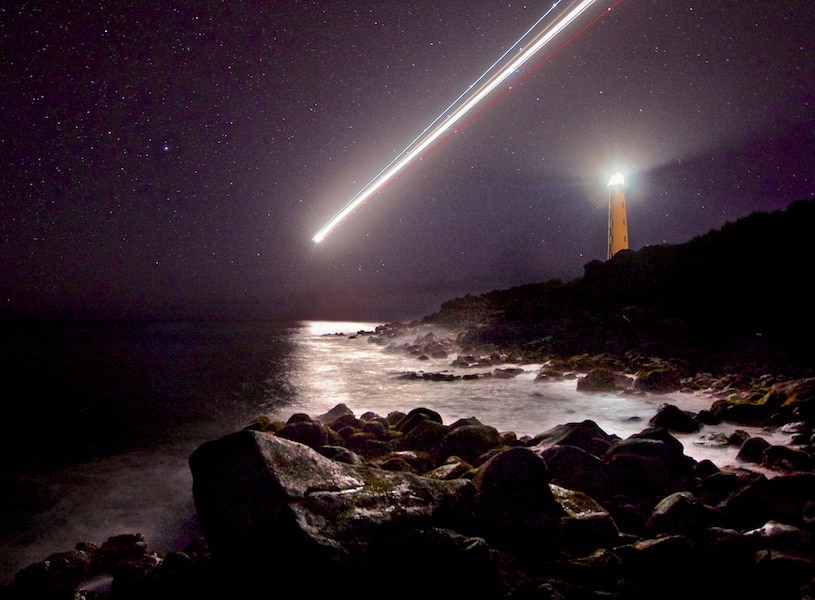 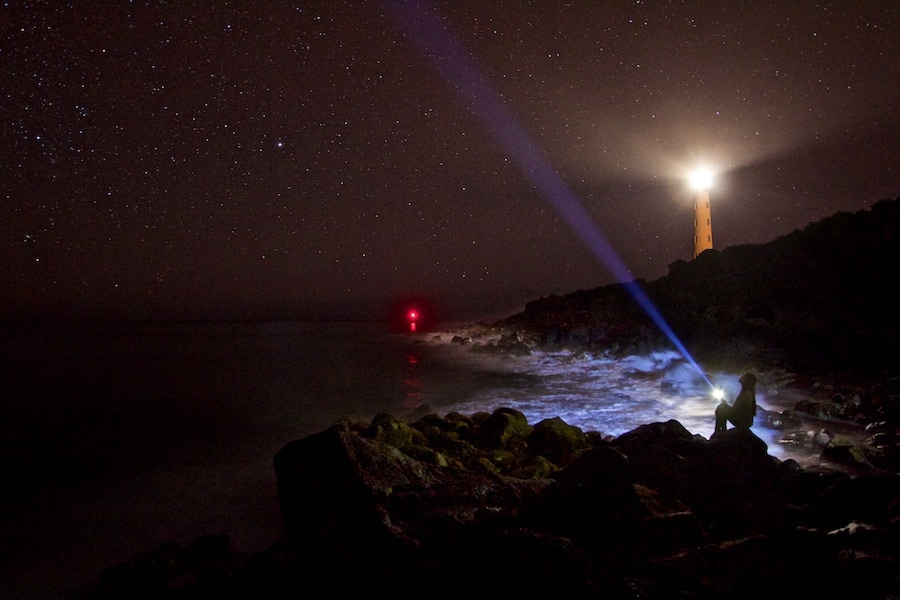 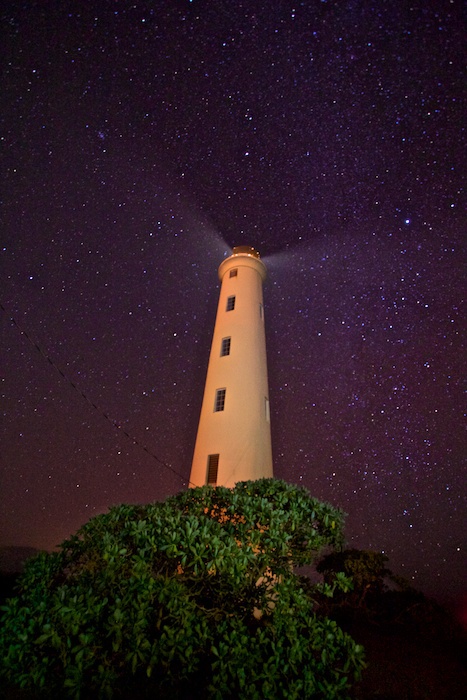 Finally I met with Patrick to put the finishing touches on the process â post processing. We sat in the Starbucks for a couple of hours and he was able to open up a whole new world for me when it came to using my post processing tools. I have been using Aperture for years now and itâs all been self taught which means Iâm in ruts in post processing too. Even though Patrick wasnât familiar with Aperture it didnât take him long to play around and understand it. He used it for 10 minutes and could get more out of it than I could get out of it for 4 years! Dodging and burning brushes, tips on how to deal with white balance and the colors, how to lift adjustments made for one image and apply them to many others in one click â all of these things were new to me. I normally used a macro editor called, Topaz, which Patrick explained to me changes my RAW file into a tiff to edit â so I already lose the details of the RAW by doing that. He taught me how I can better edit the RAW file directly in Aperture just as quickly. 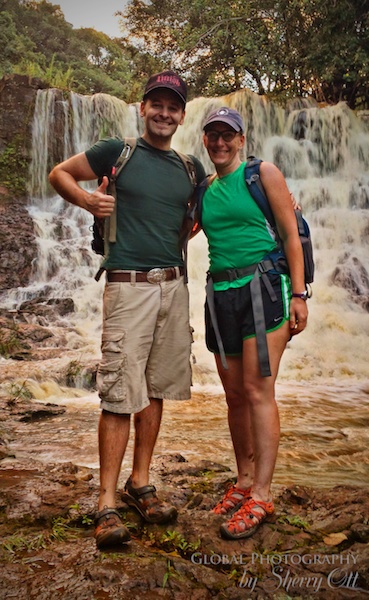 Patrick and me at Hoopii Falls

Check out Kauai Adventure Photography Workshops. They offer a variety of workshop options  – see them all www.kauaiphotoworkshops.com

Not like I need a reason to go back to Kauai â but I would go back in a second to be able to spend more time with Patrick and Matt.

View my complete photo album from my time with Patrick and Matt âhere –  how did I do?

16 Responses to "Adventure Photography in Kauai"