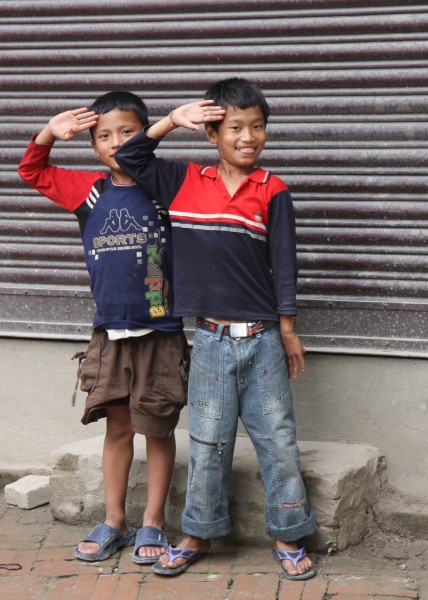 After a refreshing, civilized stay in Pokhara for two nights, I arrived back in Kathmandu with a new outlook; it was no longer scary. I was reminded again of just how powerful time is. As Iâve noted before, I think time is one of the most important resources in the world. Forget pining away for youthâ¦I just want more time. Iâm a time whore. It makes everything better.

This was my chance to explore the innards of Kathmandu. With my new outlook I was ready to embrace the muddy, crowded, loud capital city. I was amazed I could walk around the same streets that I had been on 2 weeks prior with a new confident, happy manner. Smiling at people I passed, snapping photos. Quite a turn around from when I first arrived where I was as jumpy as a dog in a thunderstorm. I trusted no one, I was terrified of walking on the streets, I hated being dirty and not understanding the chaos going on around me. Now I was accepting it.

I had a lot of ground to cover in Kathmandu in a day and a half, seeing some of the main sites and capture the city life on film (ok â digital âfilmâ). I first stopped at a few of the famous temples. Nepal is a mixture of religions but it is mainly Hindu and Buddhist which isnât surprising considering itâs neighboring countries are India and Tibet. We (a guide and I) went to the stupa at Swayanabath, on a hill on the western edge of Kathmandu. A stupa is a Buddhist religious monument consisting of a hemispherical base, and a square top with a pagoda-style roof. This temple was also known as the Monkey Temple, due to the troops of monkeys living there waiting to harass you. Situated high on a hilltop, it was a great place to get some perspective on just how sprawling Kathmandu was. 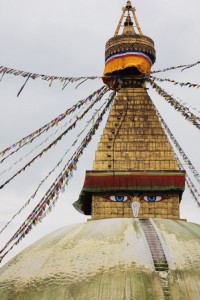 Next I went to see the most famous Nepalese stupa of them all, Baudha. Itâs one of the largest in the world and locals and tourist circumvent is all day long offering and receiving blessings. Itâs the center of attention surrounded by shops and a circular path. The all-seeing eyes peer down at the masses of people coming to visit.

The next stop I knew very little about, Pashupatinath, a temple dedicates to the Hindu God Shiva. Hindu pilgrims and sadhus (holy men) come from all distances to Pashupatinath. In addition to the live people, dead people also come to Pashupatinath since it is the most auspicious place to be cremated in all of Nepal. I decided that investing in a guide at this site would be money well spent â so I hired someone to take me around and explain what I was seeing; lord knows there was a lot to see. There were funeral pyres lining the river bank as ambulances pulled up with bodies wrapped in golden cloth. Mourning families poured out of cars with the deceased and had small ceremonies around the pyre before the body was set ablaze. This was a first for me. I stood there mesmerized by what was in front of my eyes â an actual cremation. 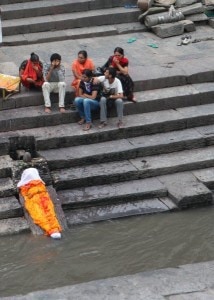 Family gathers by the river before the cremation

My guide walked me around the whole complex explaining the sadhus, Shiva, and the funeral process to me. Most of the time I stood there listening to him overwhelmed by what I was seeing. The temple complex was beautiful, however I was fascinated with watching the families of the deceased. The Hindu culture is built on karma, and this was a wonderful example of how karma works. As I watched the families go through their ceremonies I was struck by how calm and accepting everyone was. They all knew that their loved one was coming back in some other âformâ. Iâve always found the Asian culture to be more accepting of death than our western culture, and I believe that Karma has a lot to do with it. Pashuspatinath was a fascinating place to see and wonder around for an extended period of time, I was happy that I spent the extra money for a guide so that I could better understand it all.

After a relaxing a bit at my hotel and some cold lime juice I was ready to go out again and explore the streets of Kathmandu. The same streets that terrified me a few weeks ago now were my backdrop for some photo shoots. I made my way to the most famous spot in Kathmandu, Dubar Square. As I walked down the muddy, narrow street I stopped along the way and interacted with the locals taking photos and asking them questions when possible. I wandered into stores and took my time really looking at my surroundings this time.

Video of the what it’s like to walk on the streets of Kathmandu – a bit chaotic!

I arrived at the square and was of course accosted by a ton of people that wanted to show me the square for a fee. I swatted them away and went about exploring on my own. The square is a complex of ornately carved temples and monuments including the old royal palace. It feels like the central nervous system of the city with people, bikes, cyclos, cars, and animals darting about with horns blaring. The Times Square of Nepal. 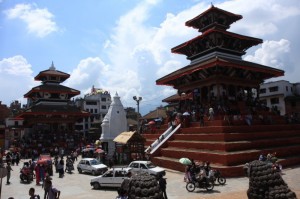 Locals come to sit on the oversized stairs of the monuments and watch life slowly roll by and tourists come to see the chaos. Little outdoor markets surround the perimeter of the temples and monuments where people hawk their fruit and vegetables, flowers, rice, and beans. I thoroughly enjoyed wandering around the markets making connections with the various vendors. They may seem stand-offish at fist, but eventually I would get a smile or a laugh when I pointed my camera at them. Hopefully I was able to capture some of jubilation that I witnessed in these Nepalese shopkeepers.
I took my seat on the oversized stairs and watched life roll by for a while. Soon I had one of the tour guides come and sit next to me and strike up a conversation. His English was good and once he understood that I wasnât going to hire him for tour, we actually just sat and had a really great conversation that didnât include âbuy from meâ. 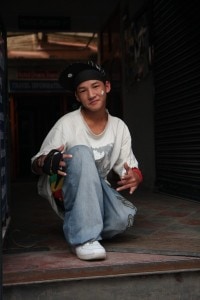 A shot of modern Nepal, a young boy displaying his western attitude

My final stop was for payback; payback of the hospitality that I received.Â  Mr. Badri, the head of Hands for Help Nepal (the organization I was volunteering through) took me over to a tour agency where I had the pleaure of meeting Didi’s younger brother, Giriraj.Â  He lived and worked in Kathmandu and spoke very good English.Â  He worked at the university by day and ran a tour agency at night.Â  I wanted to meet him as I had spoken with him on the phone while I was staying with Didi a few times.Â  I think she wanted to make sure that I had someone I could speak English to periodically , so she would call her brother and have him speak to me!Â  I sat and shared a coke with Giriraj and Badri and talking about Hands for Help and how they could continue to bring in volunteers from the US, and we talked about Puma.Â  I left a big envelope of hundreds of photos with Giriraj to take back to Puma and share with everyone.Â  I was excited for them to have their own photos as I knew it was a unique treat for them to have pictures of themselves.Â

I exchanged contact information with Badri and Giriraj in the hopes to continue a relationship with them.Â  Finally, I wandered to a place for dinner and wasnât even surprised when the electricity went out for a few hours. I had become accustomed to the electricity being off more than it was on. I treated myself to an apple tart for dessert and sat satisfied with my new outlook on Kathmandu.