Book Review – The Girl in The Picture 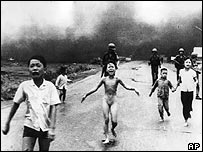 This is the story about a picture which I’m sure you’ve all seen – a little girl, Kim Phuc, running down a road, naked and burned by napalm – her picture was snapped and it changed her life. Nick Ut was the photographer who captured the screaming little girl on film and the rest of the world quickly saw the side of the Vietnam War that no one wanted to see or admit, innocent people effected. It is about her struggle for recovery, and her struggle for her life after the war under the communist regime.

I really enjoyed this story as a way to get me in touch with the history of the Vietnam War from the perspective of the poor, local Vietnamese village people. It not only covered the history of the war (American and Vietnam), but it covered what it was like for a poor village family in South Vietnam before, during, and after the war.

Much like the recent movie and book, “Flags of Our Fathers”, this picture which made history transformed Kim Phuc’s life. She was used as propaganda by her own government, yet she was also provided privileges that others never had. It was a miracle that she lived through her severe napalm burns, and her life of recovery, love, faith, and heartache was fascinating to read.

I recommend this book to anyone that wants to learn more about Vietnam and the war in general!