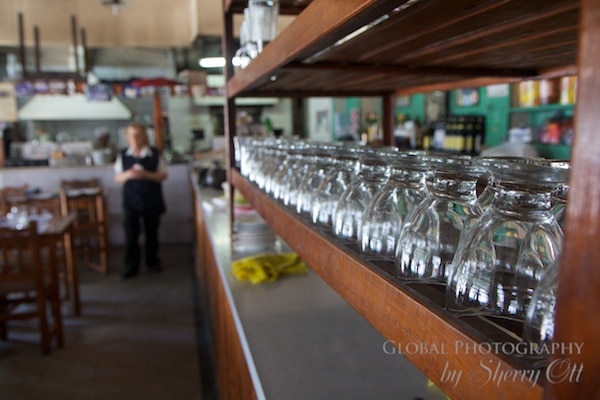 Itâs 11:30PM, you are drinking Malbec and socializing with friends across a long table.Â  The noise is deafening â but itâs the noise of joy, fun, and laughter that only friends can share.Â  Your waitress brings out a big plate of sizzling meat and sets it in the middle of the table with a cloud of smoke following her Â – you are at the core of the Buenos Aires food scene.

Eating in Argentina is fun â itâs an experience â and it goes into the wee hours of the night.Â  For most people, this is a pretty foreign eating experience.Â  However I was determined to learn more about this meat heavy diet and the strange hours in which the locals ate, so I signed up to do a Parrilla food walking tour of one of the oldest neighborhoods in Buenos Aires â San Telmo.

Our guide, David, met us on the cobblestone streets of San Telmo in front of one of the old covered markets. Â David told us about the neighborhood history as we walked through the market, which sadly seemed to be underutilized for such a pretty building. Â San Telmo is the oldest neighborhood in the city.Â  It was heavily populated at one time until it was hit with an outbreak of Yellow Fever and people started to move further out into the now popular areas of Palermo.Â  The architecture in this area has a real European feel with lots of iron work and balconies. 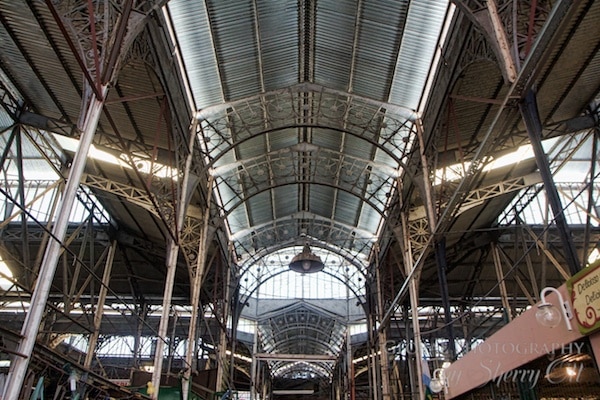 The iron work was beautiful in the old market

After making our way through the covered market we made our first stop for a classic snack food â empanadas.Â  Up to this point I had been ordering and eating this cheap snack food daily without knowing much about it!Â  Empanadas are like a small calzone with various fillings â carne (beef), ham & cheese, spinach, and sometimes fish.Â  David explained that each province in Argentina had a different empanada âspecialtyâ.Â  Buenos Airesâ empanada was made with beef, egg, cumin, and green onion typically.Â  He said that you can typically determine the âflavorâ of empanada by the shape.Â  For example the ham & cheese is more round and the carne is typically more crescent shaped.Â  Some places even put a little branding on them with letters so you know what they are.

We sat in an old cafÃ© with wooden chairs and old water/seltzer bottles and ate the delicious carne empanadasÂ  served up by a waitress who looked like she had been working their her entire life. The windows were wide open and the slight breeze blew in.Â Â  I loved the vibe of the place â it had a distinct old authentic character about it.Â  Itâs the type of place that people try to replicate in modern times, but itâs impossible to really duplicate the aura. 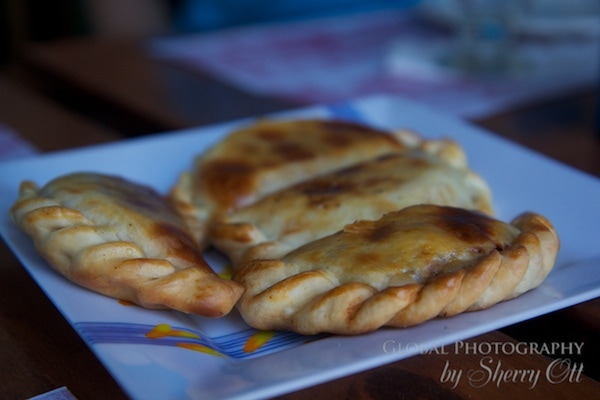 I loved the atmosphere in this cafe

What is a Parrilla?

After a few empanadas we moved on toÂ Â  – yes you guessed â more meat.Â  Our next stop was at a Parrilla.Â  Parrilla means a steak house or grill.Â  More than half of the restaurants in Buenos Aires are parrillaâs.

A parrilla has a large grill and the man who cooks the meet is called an asador. Â The grill is normally situated so that the wood is stacked and burned only on one side and then the coals are distributed under the grill spread thinly.Â  This is what makes an Argentinian steak so unique – the meat is grilled over a very thin layer of coals at a low temp for a longer time.Â  They donât like a smoky flavor so the grill is designed in such a way that the dripping wonât drop over the coals and cause much smoke.Â  Most of the beef is grass fed and the only spice they use is a coarse salt.

I was surprised to see so many people in the restaurant for lunch.Â  I had started to think of the people of Buenos Aires as vampires â who only came out at the wee hours of the night.Â  David told us that the typical eating times in Argentina was to have a small breakfast of break and coffee , lunch at 1 or 2 pm, Merienda (tea time/snack) at 6PM, and dinner anywhere from 10 to 12pm.

Here we were once again treated to a sit down meal.Â  We started with choripan sandwiches.Â  Delicious chorizo sausage grilled to perfection and put in a bun â simple and good.Â  We were also served provoleta â a grilled cheese which is typical at Parrillas.Â  The cheese is grilled quickly on each side and then dusted with olive oil and oregano and served hot. 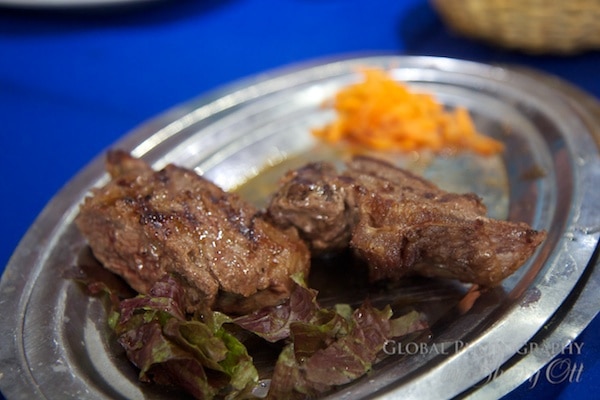 Our main course was of course a small juicy steak, a salad, and the 3 of us split a bottle of Malbec wine.Â  Steaks are served plain and sometimes accompanied with chimichui sauce (oregano, parsley, red pepper, garlic, olive oil, and vinegar).Â  After such a big meal I was ready for the part of the tour that showed us how to nap.Â  It really was more food than I was expecting!Â  The volume in the room seemed to turn up as everyone, including our table, was becoming more social with every sip of wine and bite of steak.

Fighting off the urge to nap, we moved on to our final stop, an ice cream shop. Â Ice cream was brought over from Italy and is generally very high quality due to the great dairy products in Argentina.Â  Itâs the most popular dessert in Argentina and that should explain why you see ice cream shops all over the city. Â Most shops make their own flavors on the premises and they even deliver quarts and gallons right to your home!

We walked into the shop and were immediately overwhelmed with the variety of flavors on offer.Â  There must have been about 35 flavors â and they even had a cervesa-flavored ice cream.

They allow you to taste anything you want before you choose you scoop so of course I had to at least try the cervesa ice cream.Â  It started with a slightly citrus taste but then finished with a beer taste â which felt just wrong if you ask me.Â  I instead went with the flan dulce de leche flavor, which my taste buds were quite happy about. 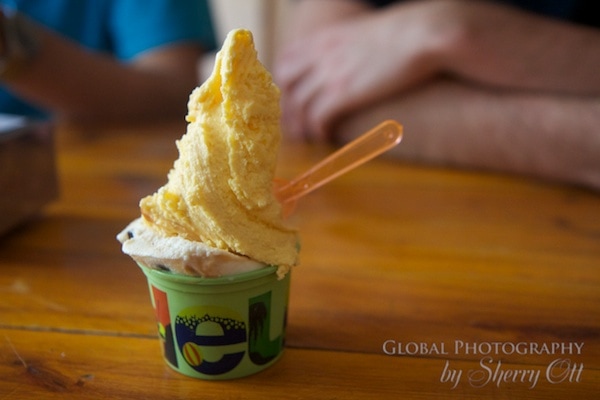 With so many choices of ice cream – it’s hard to pick one! But steer clear of the cervesa flavor!

Our 2 hours of stuffing our face seemed to go quickly!Â  We had visited 3 restaurants for a complete and very filling meal all within about a 5 block area.Â  But before we all left David provided us with a really useful restaurant guide as wellÂ  a handout of Spanish food terms and how to pronounce them such as âmedium rareâ.Â  It also included a complete list of the types of meat you can order.

We were now all armed to go out and explore the restaurants in Buenos Aires and order like a local.Â  Dave also provided us each a small gift before departing to explore the neighborhood more on our own.Â  This was a great way to get quickly up to speed on the foodie scene in the city.Â  I suggest you do it your first day and then try out the restaurants on Davidâs list for the remainder of your stay. Â The only way youâll go hungry in Buenos Aires is if you are a vegetarian!

Take this Delicious Food Tour Yourself!

Â For this tour I was a guest of Viator Tours.Â  However all opinions here expressed are my own.

One Response to "Argentina Food Tour for Meat Lovers"